The sport of mountain running is evolving in a direction where runners want to apply their fitness to the Alps' biggest peaks. For many mountain runners, they aren't interested in going further, they want to go higher. But higher means more technical terrain with far more objective hazards compared to running trails. More and more, poorly-prepared and inexperienced runners are getting themselves into serious trouble as they move into higher mountain terrain for which they are not skilled.

Peaks serve as goals and playing the game of climbing is where the necessary mountain skills are required. For many runners pushing higher and higher, at some point they hit a line where their skills don’t match the conditions. That line might be a crevassed glacier, a steep, frozen snowfield, a rock ridge with no clear route, what not to stand beneath, the safest line to avoid rockfall, or even an important gear decision for what the route requires.

Gear choice becomes critical in alpine terrain. The more you take, the more weight you have and the slower you’ll move. The less you take, the more vulnerable you are in bad weather or emergencies. Balance is key. We often wait for the right conditions that allow us to move fast and light with minimal gear. Equally as important as technical alpine skills is the knowledge of when it’s possible for you, given the conditions and your skill level, to go fast and light.

Mountain runners choosing to climb peaks with technical terrain in the Alps should have a certain foundation of alpine climbing and glacier travel skills.

We wrote a How to Trail Run in the Alps that we hope details what to expect when getting into trail running. 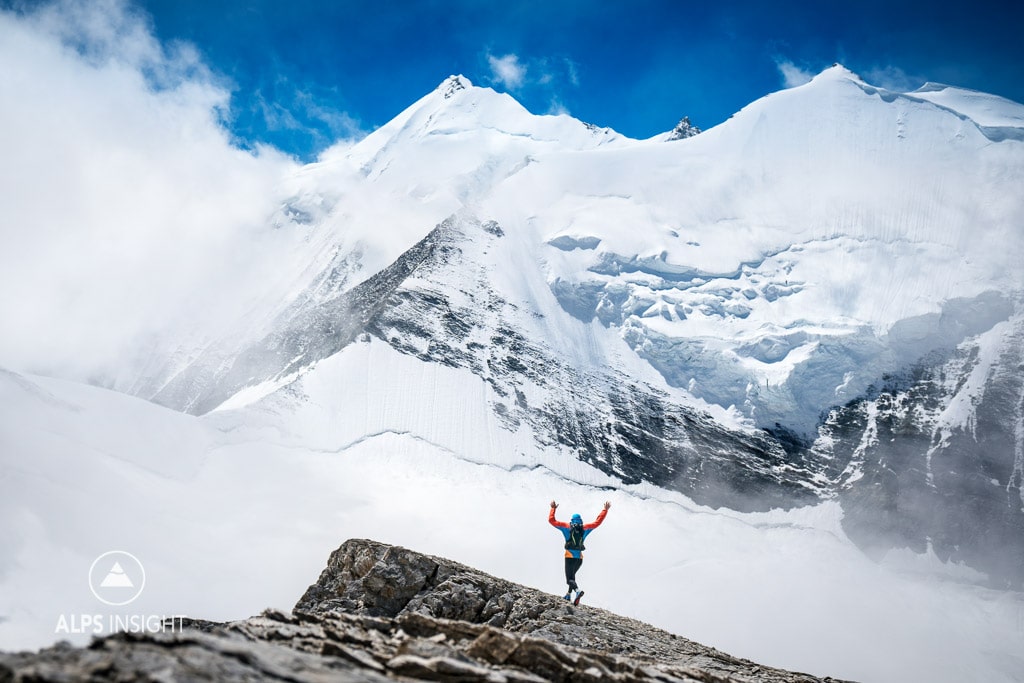 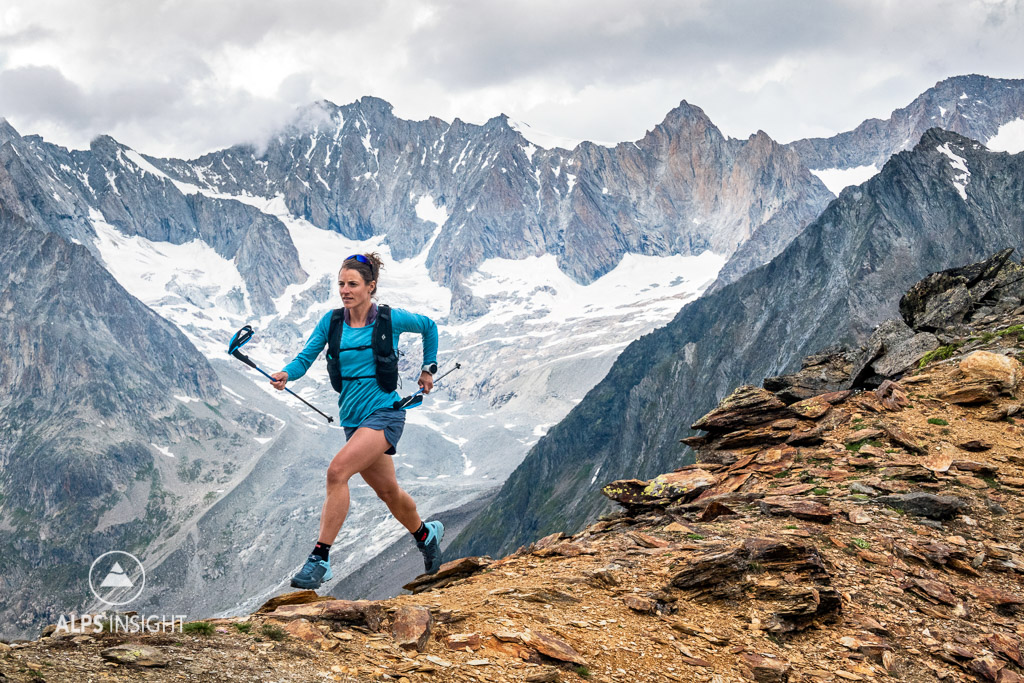 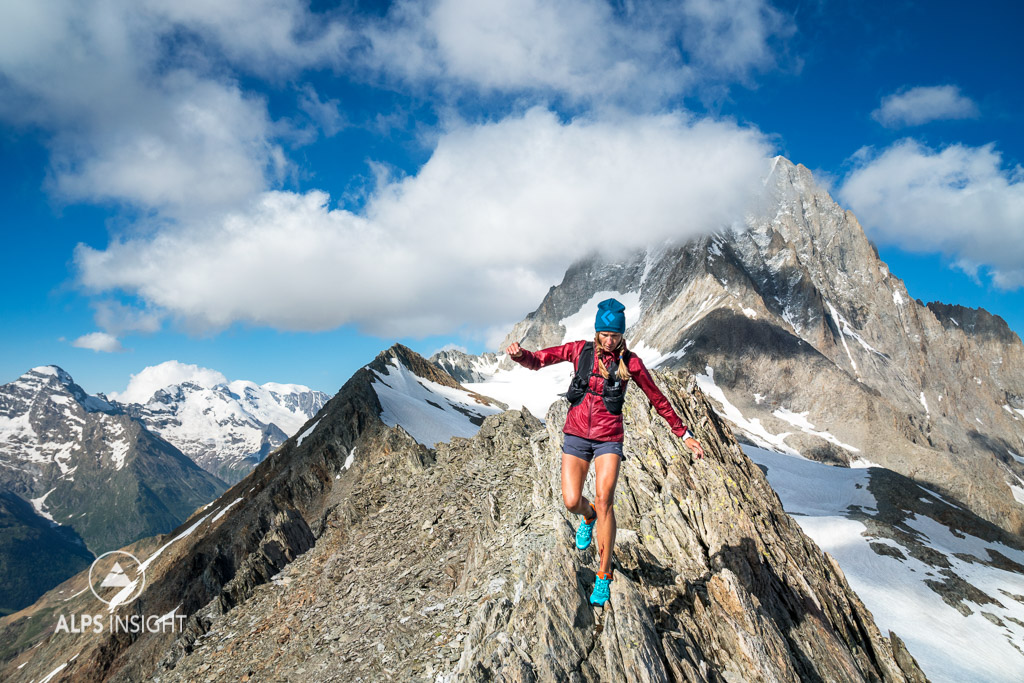 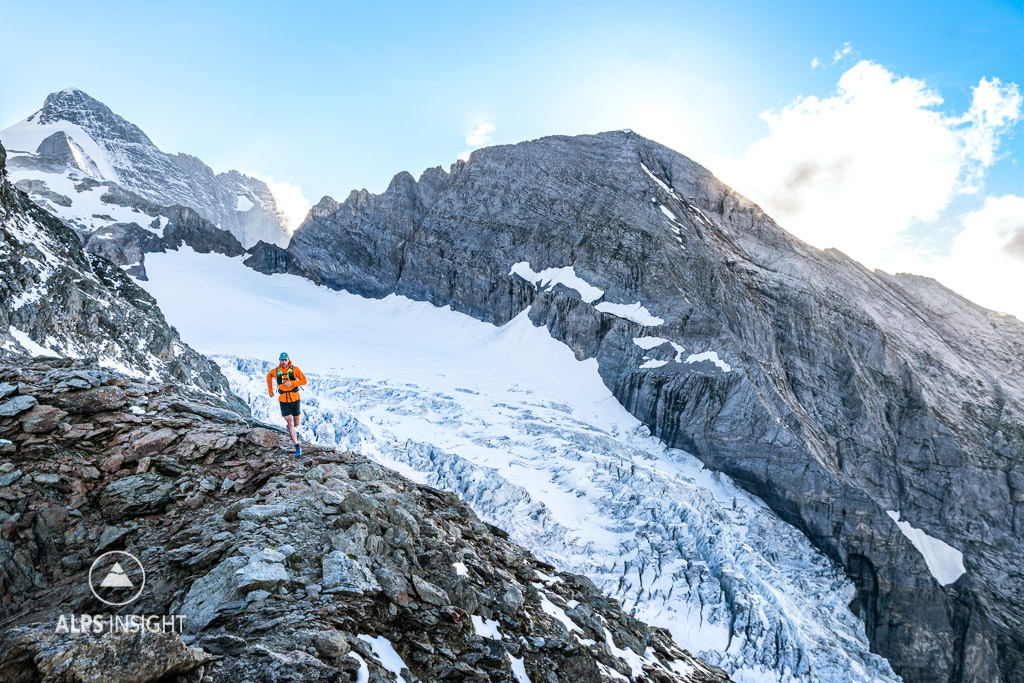 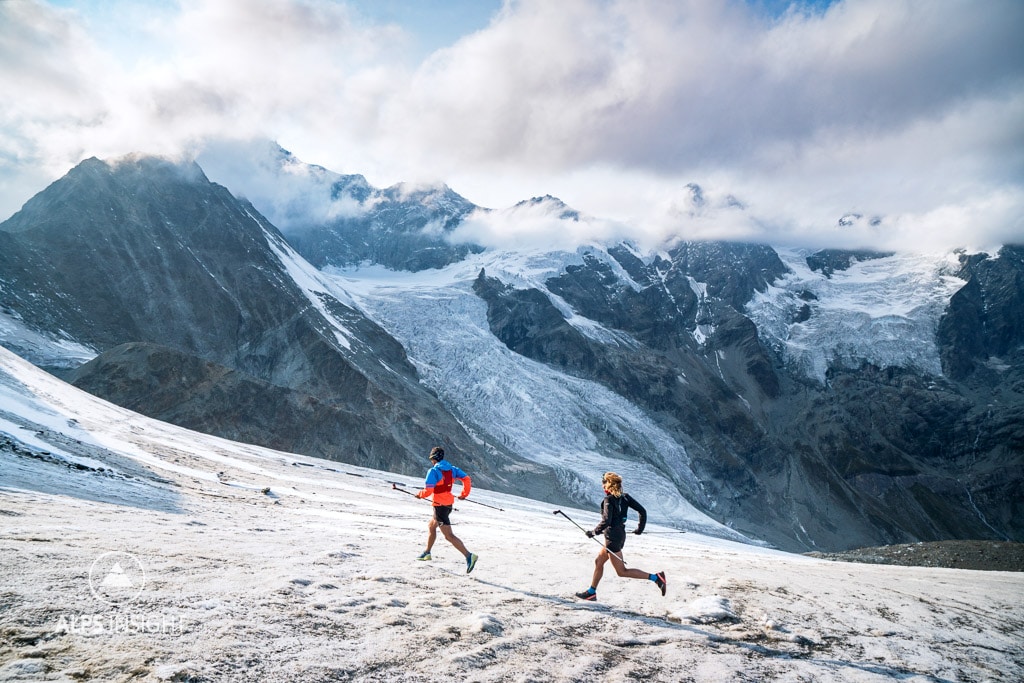 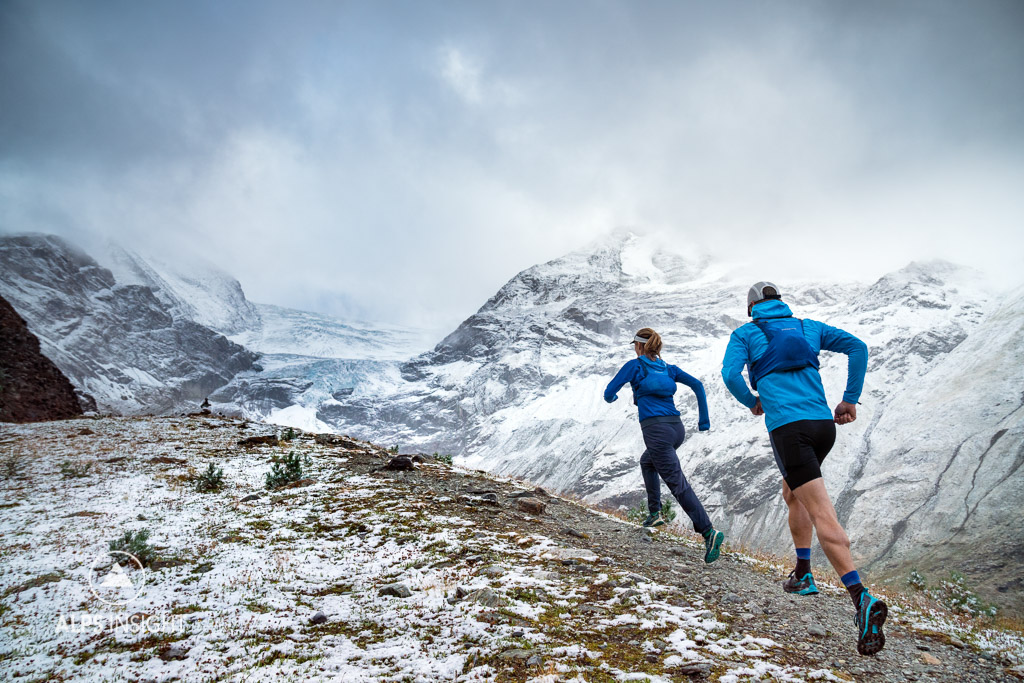 The idea for The Way Up, our version of peak running, came from years playing in the mountains with a great friend who pushed me to my limits, and opened my eyes to what was possible. This friend was Ueli Steck.

I joined Ueli for a few days during his 82 Summits project in 2015 when he climbed all 82 of the Alps 4000 meter peaks with no mechanized support; running, paragliding and biking between peaks, all in one 61 day push.

He asked me to join him for the Zinalrothorn, a peak I had previously climbed a couple of times. The deal was he'd meet me at the Rothhorn Hut after having done the Obergabelhorn earlier that morning. My strategy was to run up to the hut from Zermatt early in the morning and wait for him, then we'd continue to the Zinalrothorn together. No matter how hard I tried, I never really had to wait for Ueli for much of anything. Of course he was already there when I arrived. Together we ran up the peak, wearing running packs, light boots, and taking only a short rope for the down climbing. We were up and down it in just a few hours. Back at the hut for lunch.

I had been climbing classic routes in the Alps for 16 years, and typically did them in the traditional style; hike to hut, spend the night, get up very early, climb mountain, descend. It's how the masses do it. Ueli wasn't the masses. He was basically trail running the 4000 meter peaks of the Alps, and woke me up to what I could be doing if I combined my climbing skills with my trail running fitness.

We each have our own version of what is possible relative to our abilities. For me, I can do many alpine peaks in running shoes, or some of the new ultralight climbing boots. So, why not do what is normally done in two or three days, in one? I was a climber long before I was a runner and for me trail running for the sake of running is often not enough. I had found an outlet to put all my mountain skills to the test, from fitness, to gear, to planning. I called it The Way Up because.... well, a lot of the days you go Way Up. But not just that, you need to know the Way Up as these can be more complicated routes, without trails.

The Way Up routes are not for everyone, so we'll do our best to detail what is involved to do them. They are not solely running on trails. They may require climbing skills, glacier travel, and a solid knowledge of what will be encountered, and how to safely deal with it. This style of mountain running is not just about being able to do the peaks, it is knowing when you can do the peaks. Your gear will be lighter and without the safety margin that some types of gear afford, requiring you to understand that you are committed to going up, or coming down, quickly. Speed, continual movement, and experience are your tools. Combine all these things and you have the potential for big rewards. For me, The Way Up is my personal project that I am most passionate about. 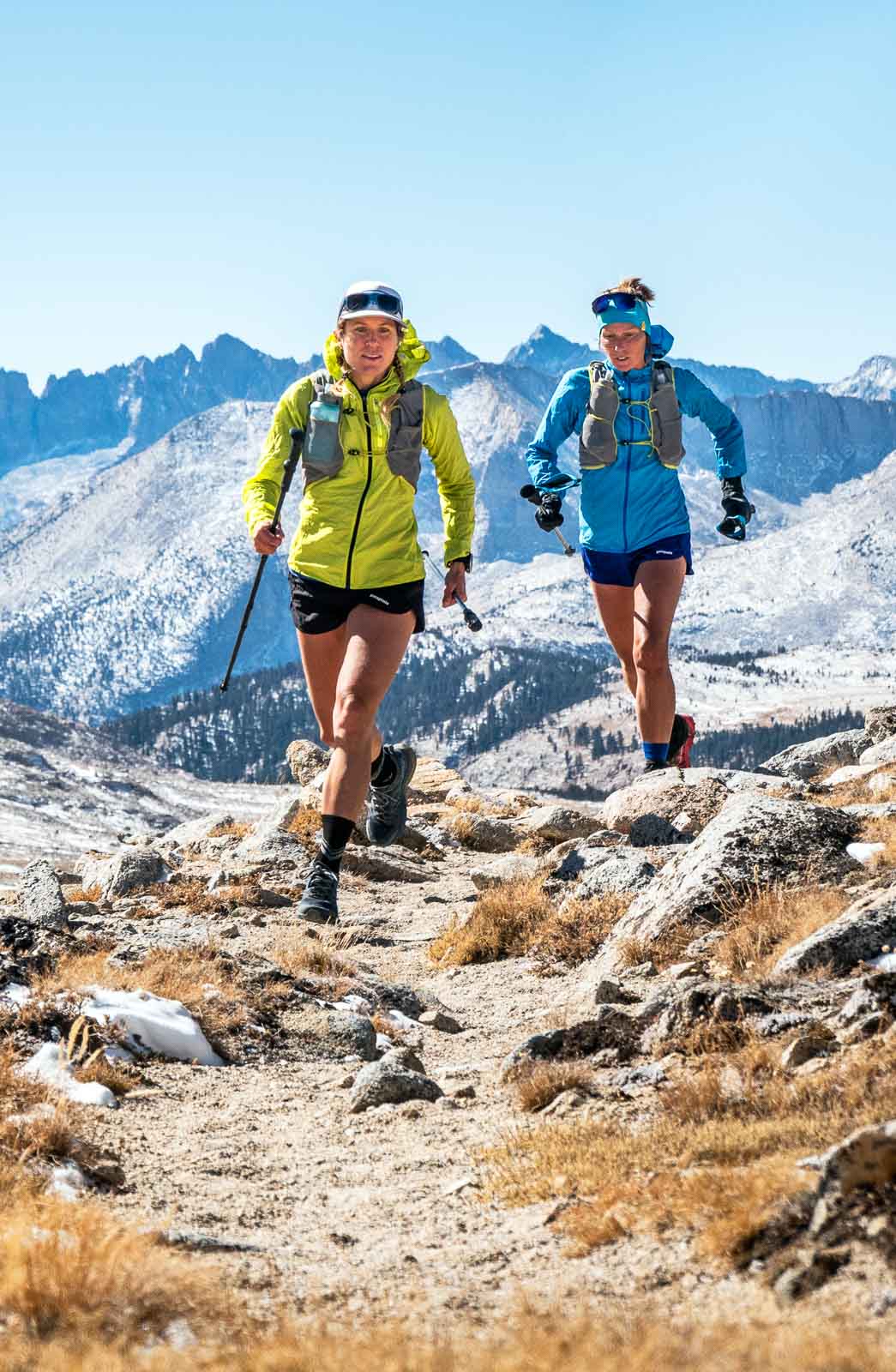 Now in North AmericaSierra Trail Runs: A Guide to the Eastside

We love the Alps, but lately we've been busy building a guide to trail running in California's Sierra Nevada. High peaks and high desert, ridges, sage, rugged and remote backcountry.

No thanks, too wild for me!