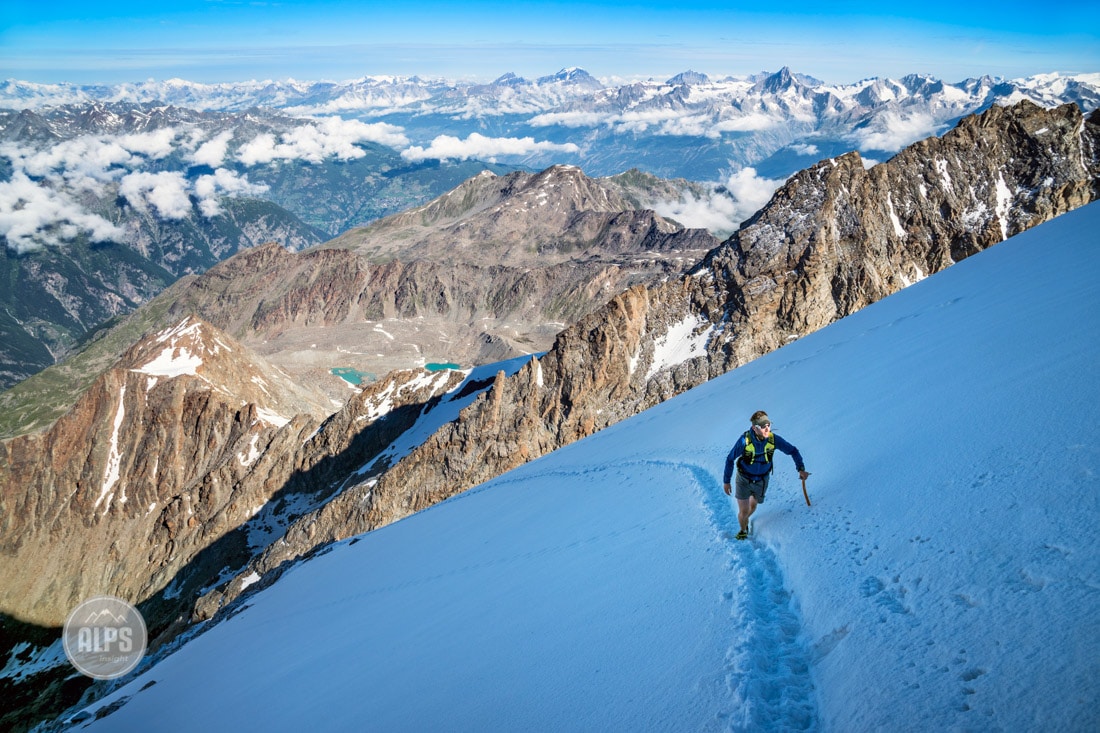 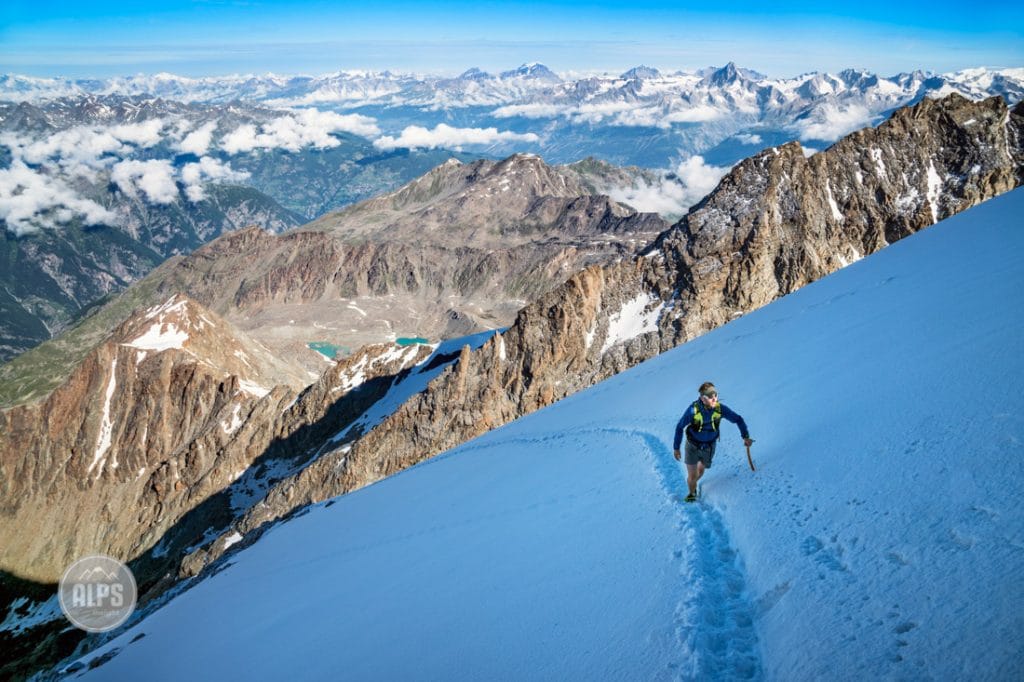 The 4010 meter Lagginhorn, above Saas Fee, Switzerland, is the only Alps 4000 meter peak that is possible to climb without worry of glacier travel, crevasses or technical climbing. Thanks to these characteristics, we put it at the top of our list for our The Way Up project. The Lagginhorn, while still an alpine summit, is possible in running shoes. Not only running shoes, our friend Bruno was determined to get up it in running shorts. He succeeded, but I did notice some shivering. 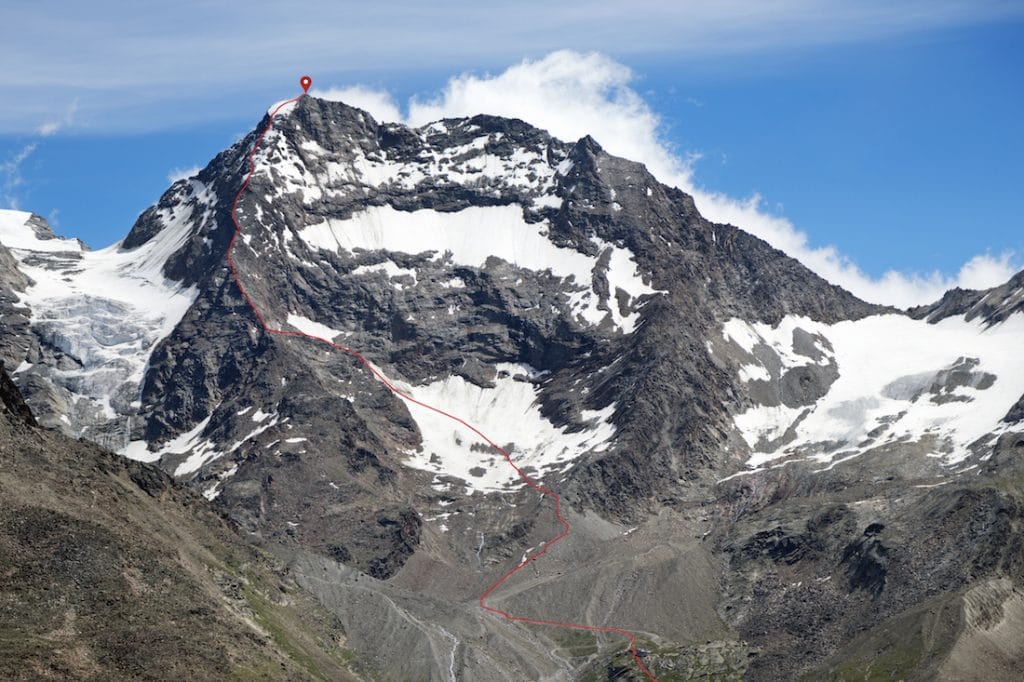 The West Ridge serves as the normal route (PD) and is almost entirely on rocky walking terrain with a few steeper steps of easy climbing. The top of the peak is usually a short snow ridge and ramp to the summit. Crampons are typically required for the last bit where a fall would be (and has been!) fatal.

We managed the entire peak in running shoes but wore light aluminum crampons for the top. While the peak is easy enough to be done in running shoes, it is entirely condition dependent. Knowing when it is possible based on the conditions, and being able to make the decision to go with light shoes comes from experience in the high Alps. While it is a relatively easy peak, it is not to be taken lightly. We knew conditions were perfect for how we wanted to do the route. 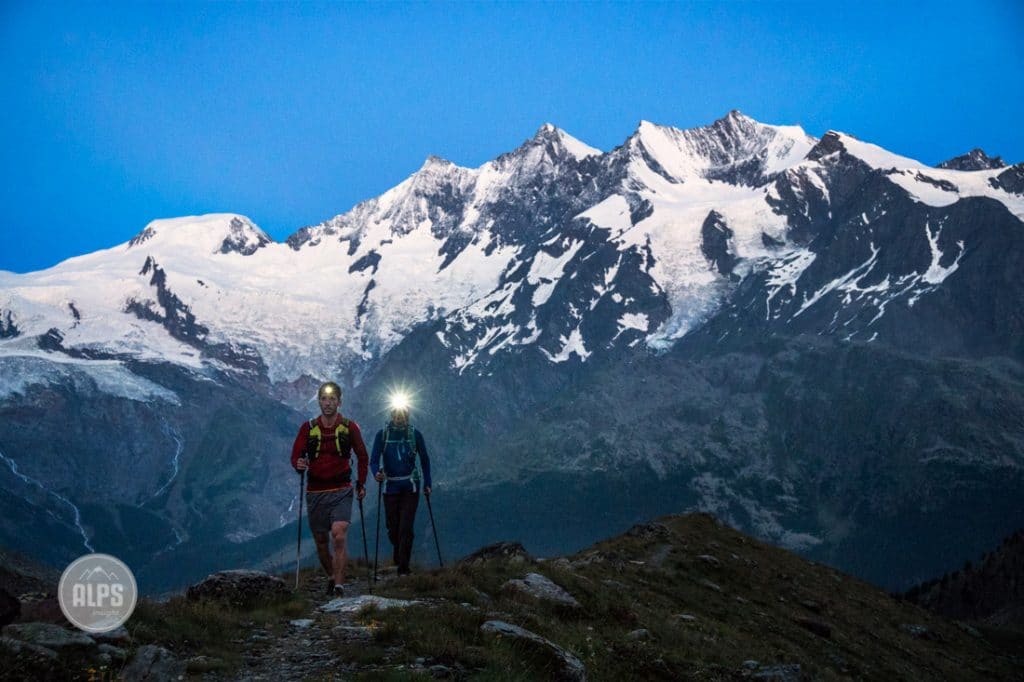 Our day started at 4 a.m. in Saas Grund where we began a long march through the steep forest. By the time we reached the snowfield at the base of the wall the people who had slept at the Weissmies Hut were visible high on the ridge. After traversing the soft snowfield we gained the rock where the long scramble to the top begins. Moving in low angle rocky hiking terrain is much easier in running shoes and soon we were ahead of the climbers we saw from below. Once we arrived to the final section of snow, we put crampons on and followed the track to the summit. There, we found ourselves in a herd of Swiss military troops trying to fish a dropped ice axe out from beneath rocks. With literally nowhere to stand, and in such light gear, we made our summit stay brief.

Overall, the Lagginhorn offers a great experience with superb views of many Walliser 4000 meter peaks. The West Ridge can be done from either the Weissmies Hut or Saas Grund. From Saas Grund, it is a 2500 meter climb. However, thanks to the Hohsass gondola option down, the knees will be ready for the next big mountain run. 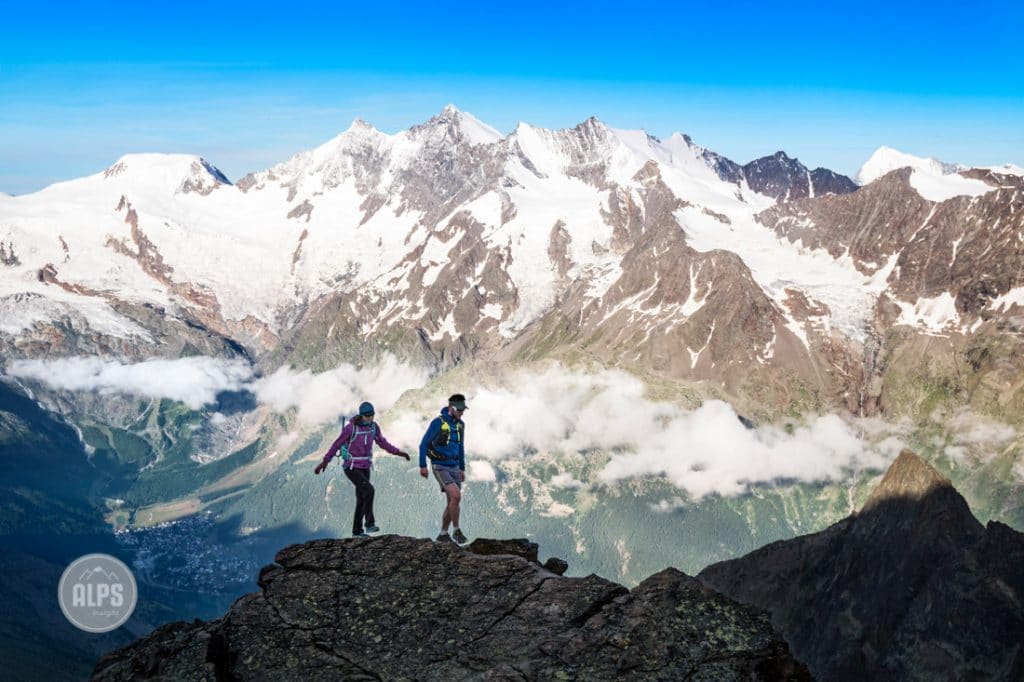 While mostly hiking through solid rock, the ridge does have short pieces of scrambling or exposed walking. Care should be taken to knock rocks down on parties below. 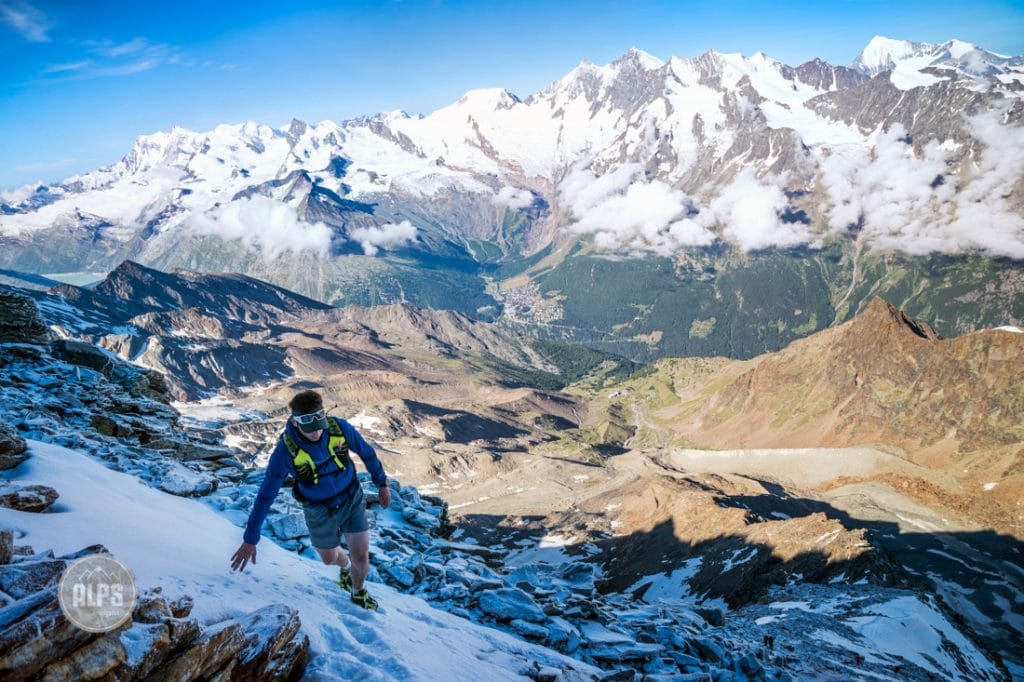 Nearing the top of the route where rock gave way to fresh snow from the days before our climb. Far below in the valley is Saas Fee, while above is the Mischabel Group. 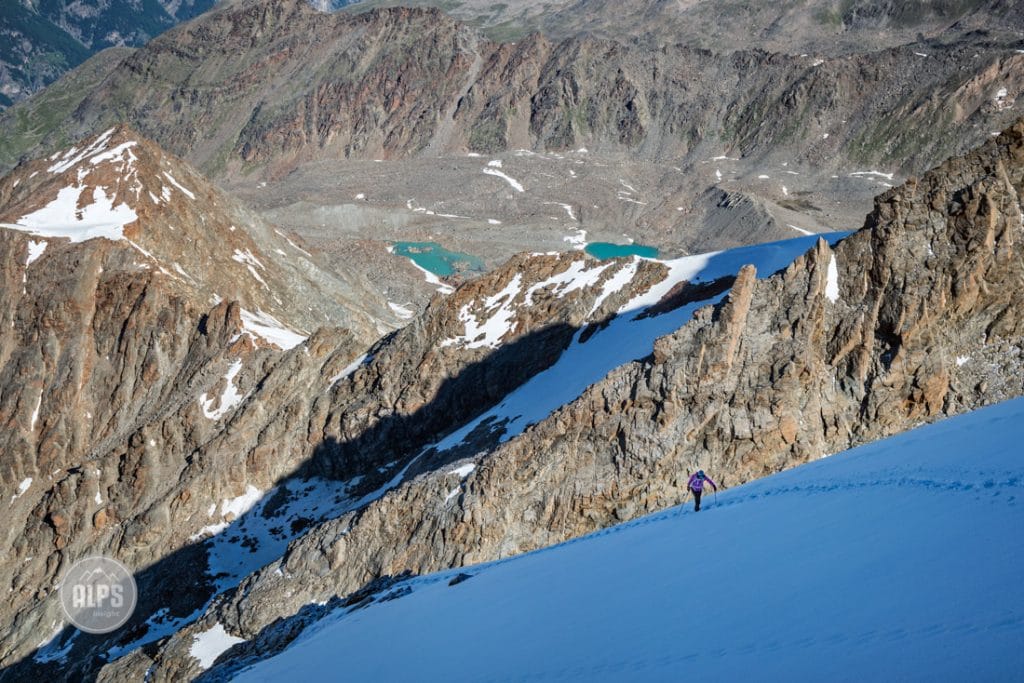 While we found a trail, we weren’t doing any running here. Janine moving up the last snow ramp to the summit. 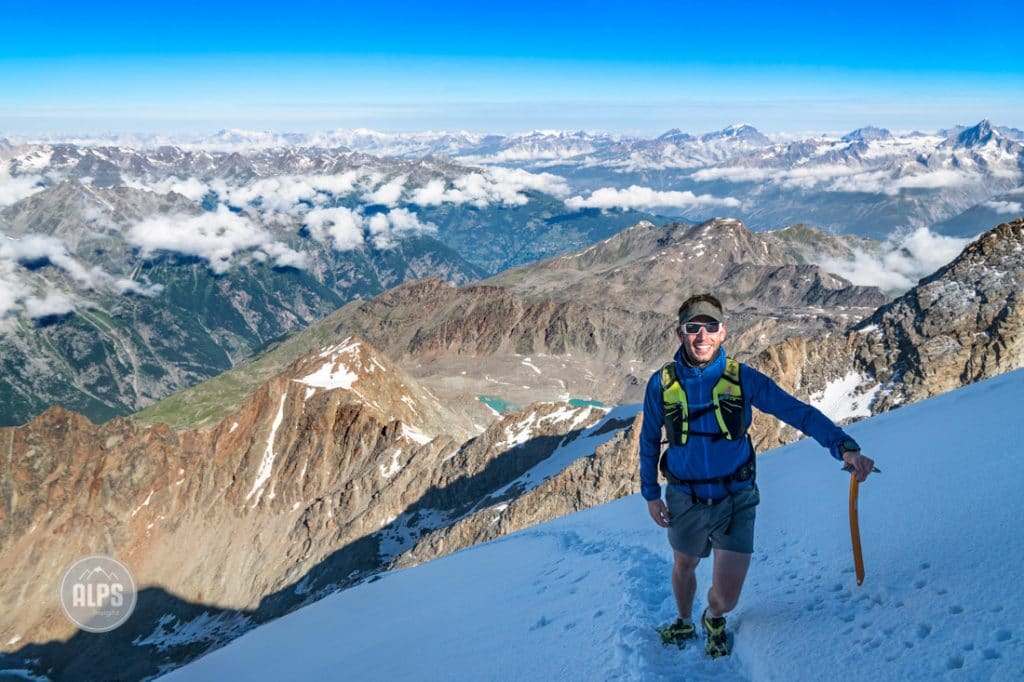 Bruno’s head arrives in the sun. 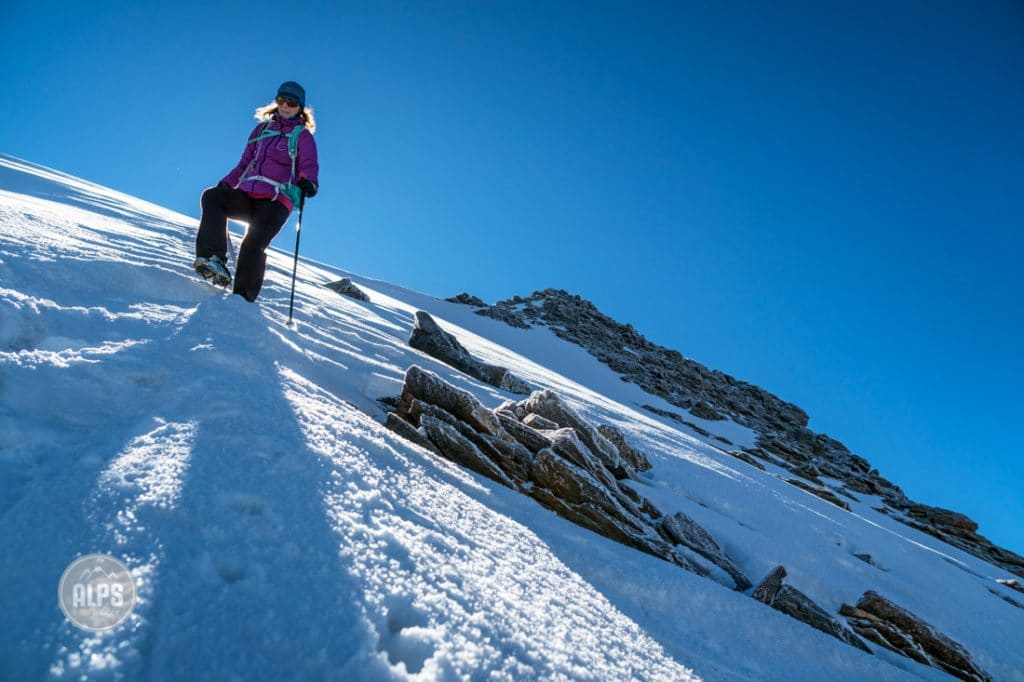 Janine starting the descent off the summit.