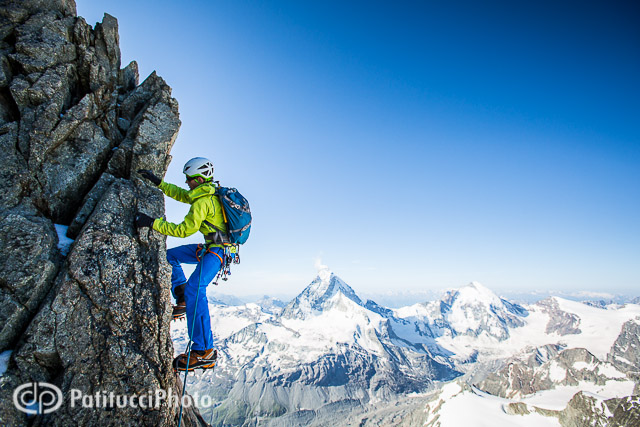 Zermatt, Switzerland is not lacking in stunning mountains. Arrival to the idyllic, car free, village is met with an overwhelming array of tourists, souvenir shops, hotels and restaurants. From the train station there is little in terms of mountain awe. But, stroll through town to the south end and suddenly things change. There, sitting entirely alone on the skyline, the Matterhorn rises like a monument. You can’t help but stop and marvel at what may be the world’s most perfect view. As a climber, you start to vibrate with psyche.

But, in Zermatt there are many more mountains to climb, and in their own way, no less stunning. As soon as you rise above town itself, what else sits above becomes visible. To the west are two perfect mountains, both dramatic, and both with classic routes. Unlike the Matterhorn with its shattered, loose rock, the Zinalrothorn and Obergabelhorn are golden granite.

We’d come to do a traverse of the Obergabelhorn, up it’s west ridge, the Arbengrat, and then down the classic route, the East Northeast Ridge. The trip was a shoot for the brand Outdoor Research with one of their athletes, Raphi Imsand, a great climber & skier and aspirant guide. Along with Raphi was his good friend Amadeo Rüedi, who would be my climbing partner. 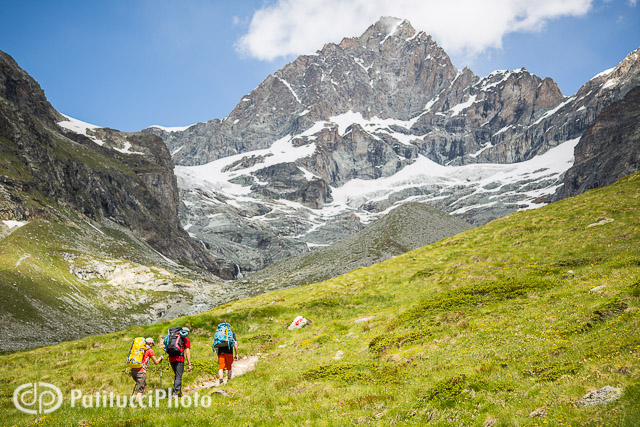 Hiking to the Obergabelhorn

The Arbengrat starts with a four hour walk into the Arben Bivouac Hut. We left Zermatt in shorts beneath solid blue skies. We arrived to the bivouac in shorts and 3 cm of hail. Luckily the sun reappeared and we could both dry off and stare up at the south face of the Obergabelhorn. Throughout the afternoon, more climbers arrived and the small, unwardened hut went from cozy to packed. Towards evening it clouded up again, thick and dark, what would our 3 a.m. wake up bring?

The sound of an alarm jolting us awake is all too familiar in the summer. Good light requires disturbingly early departures, so too long climbs requiring pre-thunderstorm finishes. Luckily the night sky was filled with stars and beneath them we geared up with headlamps on. Each party left the hut at about the same time, off to do different routes, the sound of crisp crampons steps and jingling climbing gear filled the air. 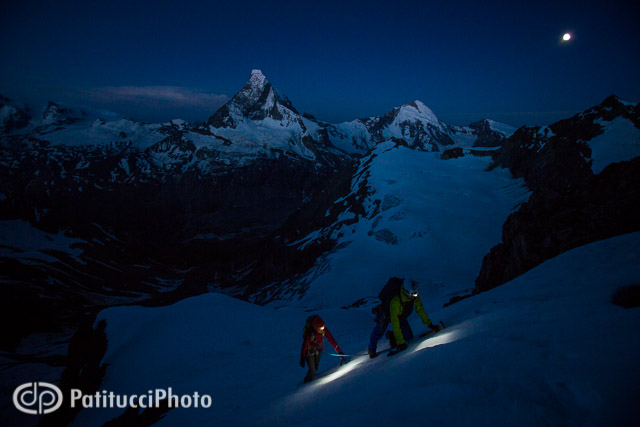 We climbed firm snow up a narrow couloir that joined the west ridge. Slowly, as dawn approached, we could see what lay around us, both the north face of the Matterhorn and Dent Blanche. The ridge climbing is mostly fourth class with sections of easy fifth up to about 5.4 (Guidebook rating AD, UIAA III+).  We did the whole ridge in crampons as the climbing itself is all on the north side with ice and hard snow still covering sections. Like so many classic routes in the Alps, you can somewhat follow the crampon marks and slings. And so we did, making images along the way and always enjoying the solid, perfect granite, right to the summit. One of the joys of the Obergabelhorn is that it can be done as a classic traverse. If done with an ascent of the Arbengrat, the descent is of the normal route, also on solid rock but with a long section of snow/ice ridge climbing, also AD with similar rock climbing difficulties (although there is fixed rope in place).

After descending the Obergabelhorn, there is the minor issue of then climbing the Wellenkuppe, a small sub peak followed by four rappels to the glacier below and a long slog out to the Rothorn Hut. 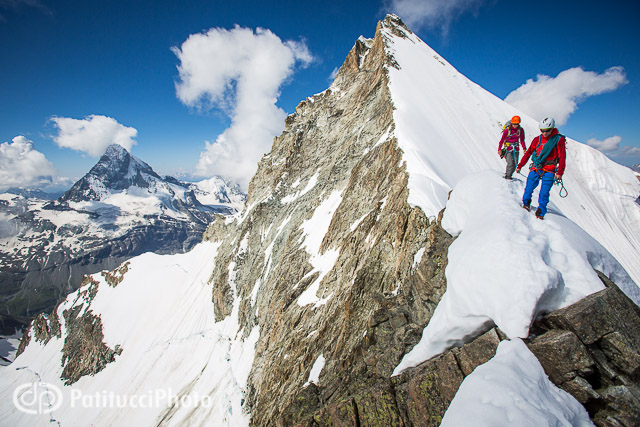 Descending the normal route, the East Northeast Ridge of the Obergabelhorn

Raphi and Amadeo headed back to Zermatt while Janine and I stayed in the Rothorn Hut so we could shoot the next morning’s sunrise. Once again, our alarm rang out at 2:50 a.m. but instead of clear skies we had drizzle and even some light snow. We headed up on the Zinalrothorn hoping to shoot at a spot we knew, but the higher we went the worse it got, so we descended below the cloud deck and managed to get some nice light for our long walk back down to Zermatt. 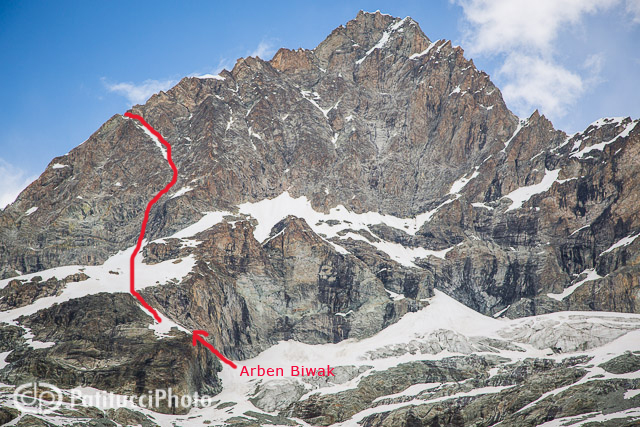 The south face of the Obergabelhorn with the Arbengrat being the left skyline. The Arben Biwak can just be seen on the rock. 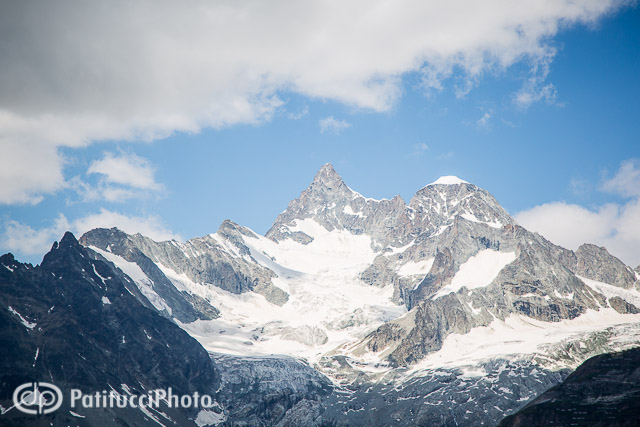 The east face of the Obergabelhorn with the normal route being the right skyline, the Wellenkuppe the snow capped peak to the right

A huge thanks and giant endorsement to Outdoor Research who continue to make great gear and are a pure joy to work with.