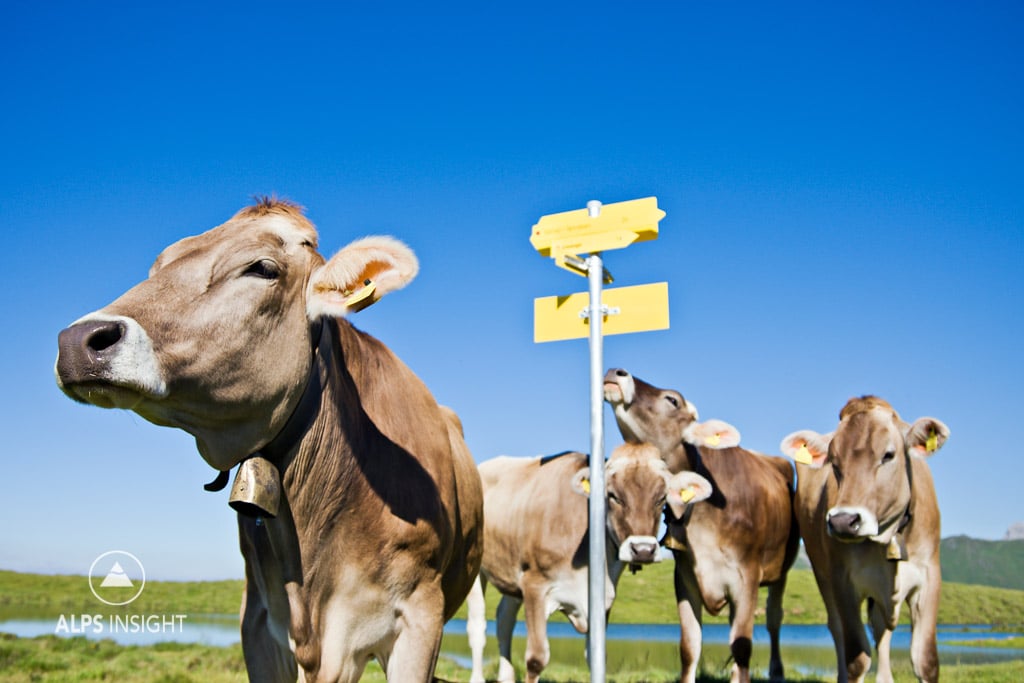 Cute and innocent, yes. But sinister plans were being made.

Being professional mountain sports photographers, we are often placed in somewhat dangerous situations; dicey avalanche terrain, threatening weather while climbing, etc… But never did we think real injury would come in the manner it did a few nights ago.

What so often begins as good fun can quickly turn ugly, at this point luck can play a role, followed by either a helicopter flight, foreign country emergency room visit, or in this case, a funny story. We prefer the “Funny Later” variety of close calls, of which we have many.

There is a small lake in the Austrian Alps we had been wanting to visit for some photos. Perfect weather was forecast and we were in the area, so off we went up the 1000 meter, 2 hour approach. Arriving early, we laid in the sun before the good evening light. While relaxing, we became surrounded by ubiquitous dairy cows curious about the taste of our salty backpacks. They hung around a bit then before wandering off to complete the utopia-like Austrian Alp scene. It was both a perfect evening for our shoot and to just be in the mountains. 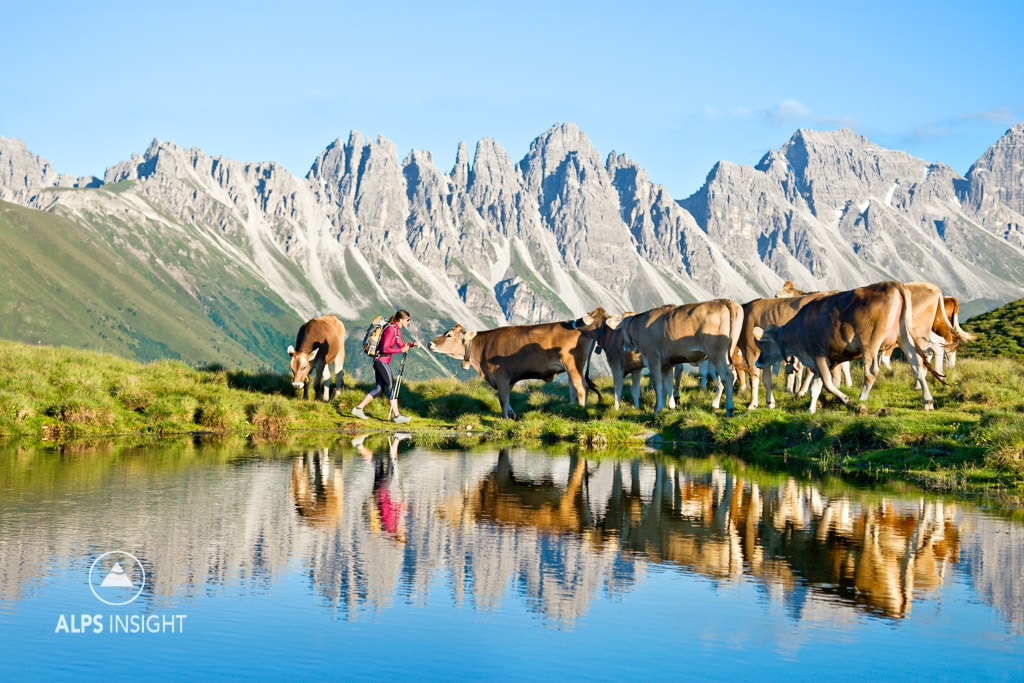 As the light began to improve we got to work, Janine walked the shoreline of the lake and I shot what would surely be beautiful stock photos in this perfect landscape.

This is when things changed. Our friendly cows moved back into the scene, surrounded Janine, and jockeyed for position in our photos. “Fine, they make a lovely addition”, I thought. Snapping a few more images with the cows accessorizing the stock seemed a great idea. Soon, we tired of having them about and Janine tried to lead them away. Where she went, they followed, and this is when things went terribly wrong. 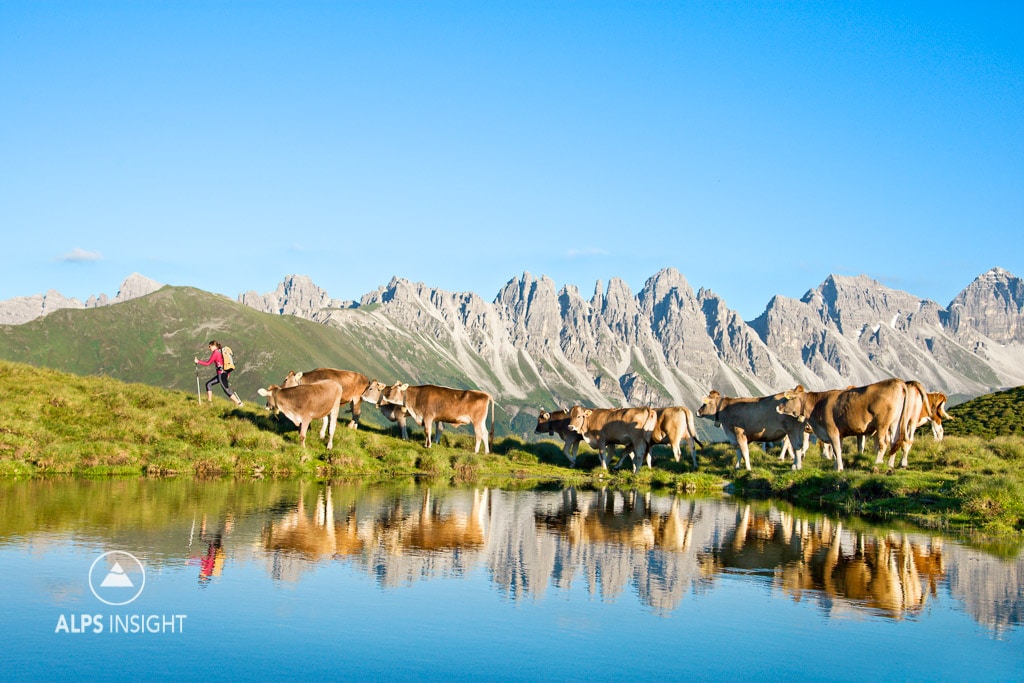 Janine’s attempt to lead the cows away turned into a nightmarish skirmish.

Suddenly, the energy was turning from playful fun to bovine aggression. Like a feeding frenzy they moved in and just barely above their mooing I could hear Janine telling them to go away. Suddenly, she became engulfed, disappearing entirely from view. The next I saw her, she was on the ground, beneath them, getting drug about. Then, in a terrifying moment I often try to forget, her body flung into the air above them, and like a rag doll she dropped back into the herd, again disappearing.

Dropping everything, I ran towards the mob scene like a Samurai warrior, swinging my ultralight carbon fiber trekking poles for all I was worth. I entered the group at full speed, they rotated their giant heads a few centimeters in anticipation of battle. Their fuzzy ears twitching to keep the flies away seemed anything but fearful of my wrath. I vaguely remember one heffer’s tongue darting into her nostrils. Janine was screaming, again on the ground. I beat the cow atop her with my poles but it was like trying to stop a freight train with a fly swatter. Mooing, cow bells, and our screams could probably be heard for many kilometers.

The lead cow turned, left Janine behind, and charged me. It’s truly remarkable how fast a cow can actually move when it makes that kind of decision. All 63kg of me took her massive skull and 800kg square in the chest. To say I was knocked down is an understatement, I was driven into the earth like a meteor. As I lay on the ground beneath her bulk, she continued to ram me, driving me along the surface of the grass between her massive hooves. I desperately clawed the ground in reverse to keep away. Suddenly I was in the air, floating even, and the thought, “When will I come down?” actually had time to enter my mind. Ooomph, into the grass I returned.

Thankfully, I’d landed far enough away to have time to get up. At this point, I’d had it. Really fucking had it. Janine was safely out of the scene now and was yelling for me to just run. But this kid doesn’t run from a dairy cow, maybe a grizzly, or a wolf, but not a cow.

I decided the only option that remained was to go insane. And so I tapped into some deep rooted lunacy and became a madman, jumping up and down, swinging my arms, and swatting their asses. This seemed to do the trick. The cows began to think better of the situation. I may be small, but I am very, very loud. Their raisin sized brains responded to the mayhem by running, fortunately in the opposite direction.

Soon we were sitting in the grass in perfect evening light, shaking from the fight, but also laughing at the absurdity. An eery silence, splintered carbon fiber, lots of hoof marks, and more than a few cow pies were all that remained in the battlefield. 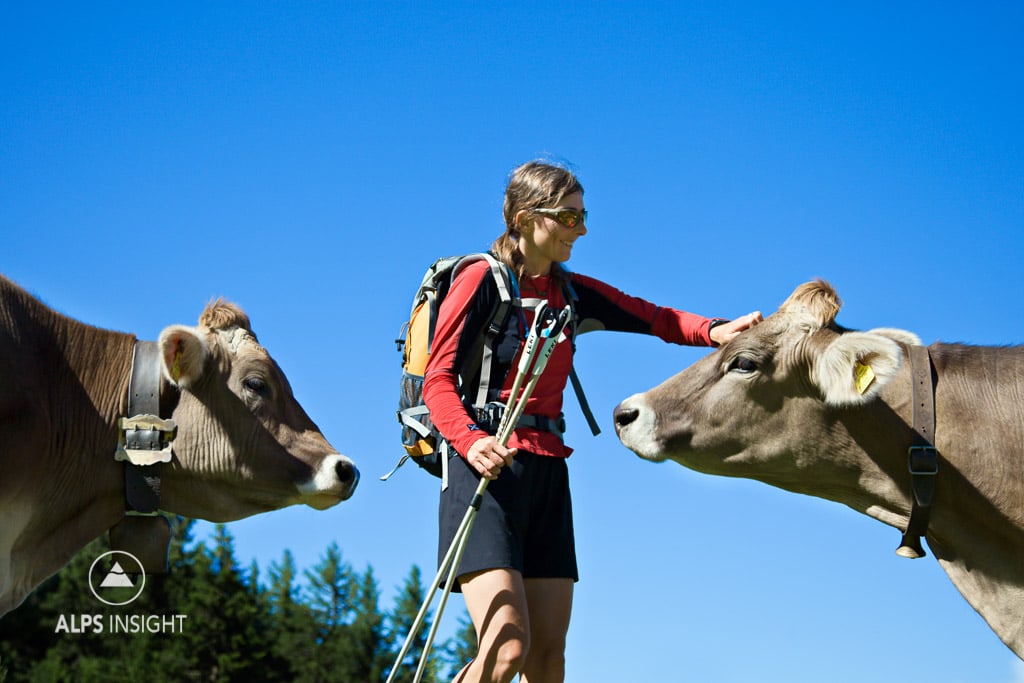 Janine, before her fear of cows.