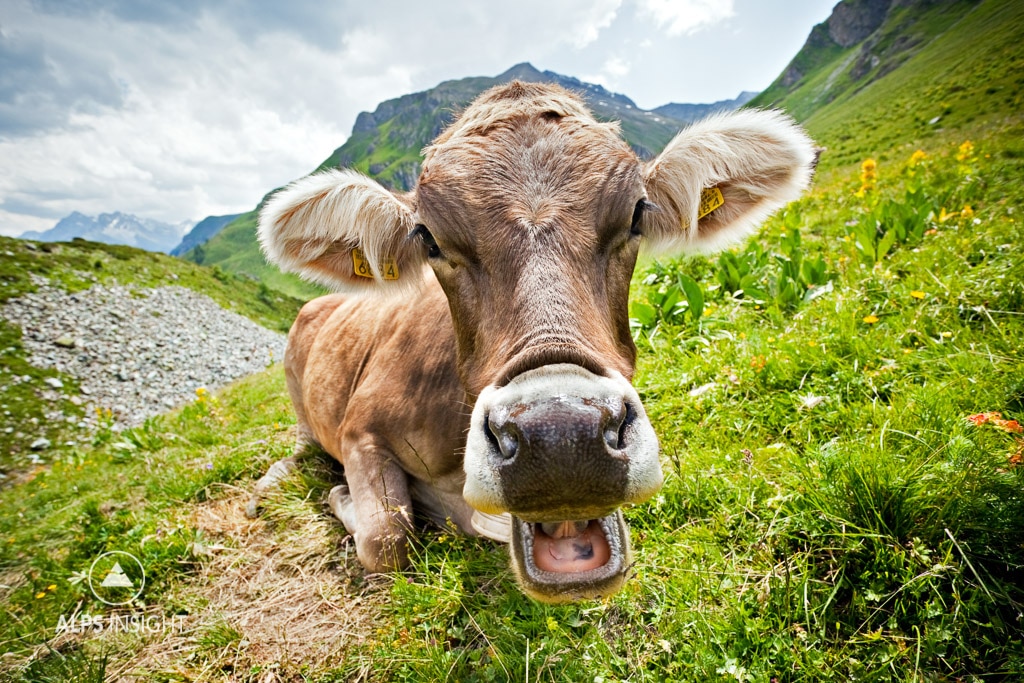 To stand witness to the great misfortune of others, and be able to offer absolutely no assistance, is a horrific feeling. One is left with the options of turning away, or spectating.

While cycling up one of my favorite passes in Alta Badia, which traverses an impossibly steep hillside of forest and cow pastures, I happened to look through a gap in the trees at precisely the right moment to catch one of life’s little comedic, yet clearly about to be tragic, scenes.

There, just two meters from the guard rail were three dairy cows, two laying down and one, standing by staring into space. Something didn’t seem right, the look on one of the cows laying down was something other than peaceful. It was alarm turning to terror.

I stopped, casually propped my right foot on the guard rail, and took it all in. In less than 40 seconds, much would occur.

The problem became immediately apparent, what the two cows were laying on was not terra firma, it was a stack of small, cut branches between large pine trees. These branches provided zero support for the bulk that is a cow. I understood what was about to occur, I think even the first victim did as well. The cows choice of bedding for the chewing of the cud was caving in. A 60 degree, 200 meter, dirt slope through larches was the inevitable destiny. They struggled in vain.

For a moment, we locked eyes, she and I. The look in her own was something I can only imagine would be similar to the Titanic, had it had eyes as it rolled into the ocean and began its descent. The irony of the song playing at high volume from my iPod did not escape me, Rihanna’s “Good Girl Gone Bad”.

Grace is not a word often associated with cows and in this case it was no different. She began to plummet. Her large, gangly legs paddled for all they were worth, but when 800kg of cow gets rolling, it’s going to take more than a set of legs to stop. I only had to rise a little bit out of my saddle to follow her as she cartwheeled down the hillside. I was able to track her for quite some time, but soon the distance grew too much and even the thundering, explosive sounds of her descent faded.

It was perfect timing as cow #2 now had a clear path to follow for her own trajectory down the hillside. Off she went.

All that remained was the third cow and myself. She had a bizarre, human like curiosity about what had just occurred and much like myself, she was inching closer and closer to the drop to see what sort of devastation was below. It was almost as if she wanted to go get help for her friends, but sick curiosity had her sticking around at the scene.

I decided it was time to go tell the farmer, so I clicked into my pedals and rolled on, practicing in my head how to say in Italian that two of his cows just rolled down the mountain.