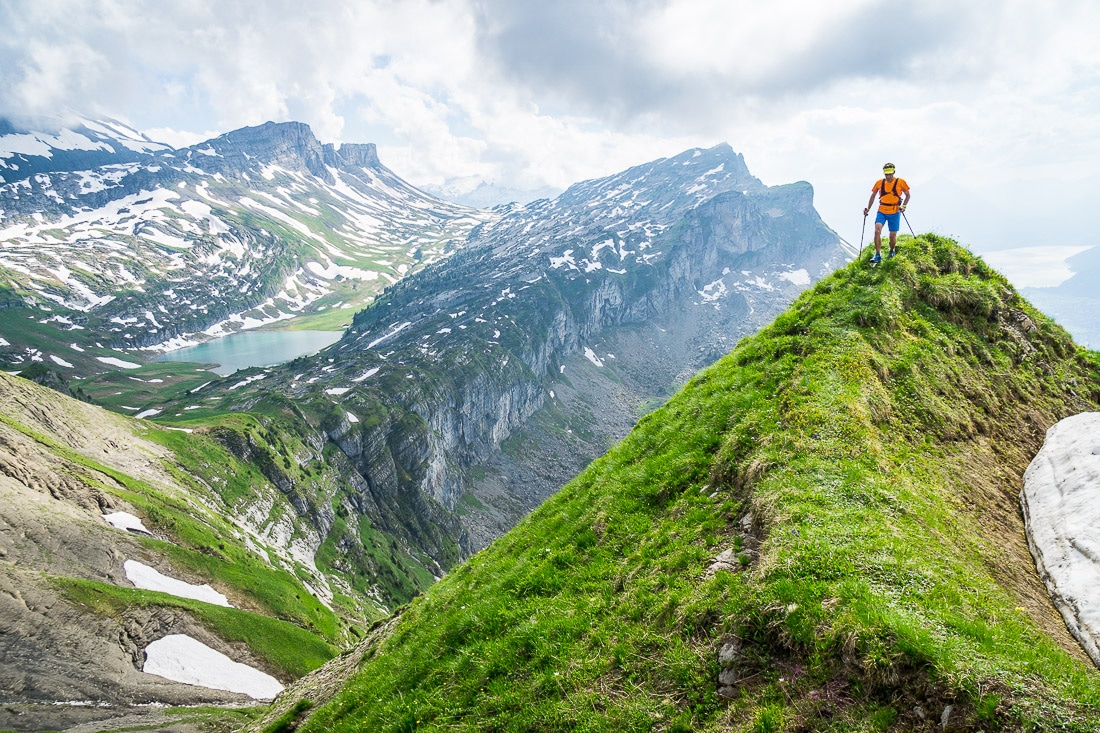 We keep a to do list for days when we don’t have to shoot photos for work. These are the days we typically explore the mountains surrounding where we live in Interlaken, especially areas not so popular. Today we found a tour that certainly qualified for not popular, mildly dangerous even, and far from “classic” status. It was superb in every way, and a tour we’ll never forget. Not for the route, but for the obstacles, surprises, decisions, and overall uncertainty that made it so wonderful.

Above all else, today proved that sometimes in the Alps the best thing you can do is seek out your own way, not the way of so many others. Of course the routes we recommend here are the “classics”, the guarantees of a great time. But if you have a spare day while traveling in the Alps consider drawing your own lines on a map.

Little of this will make sense to the reader, and it’s not supposed to. It was just our day and at the time didn’t make much sense to us. But it sure was fun. The trip we did doesn’t even have a logical name, for we covered so much ground in an area few go that I have no idea what to even call it. 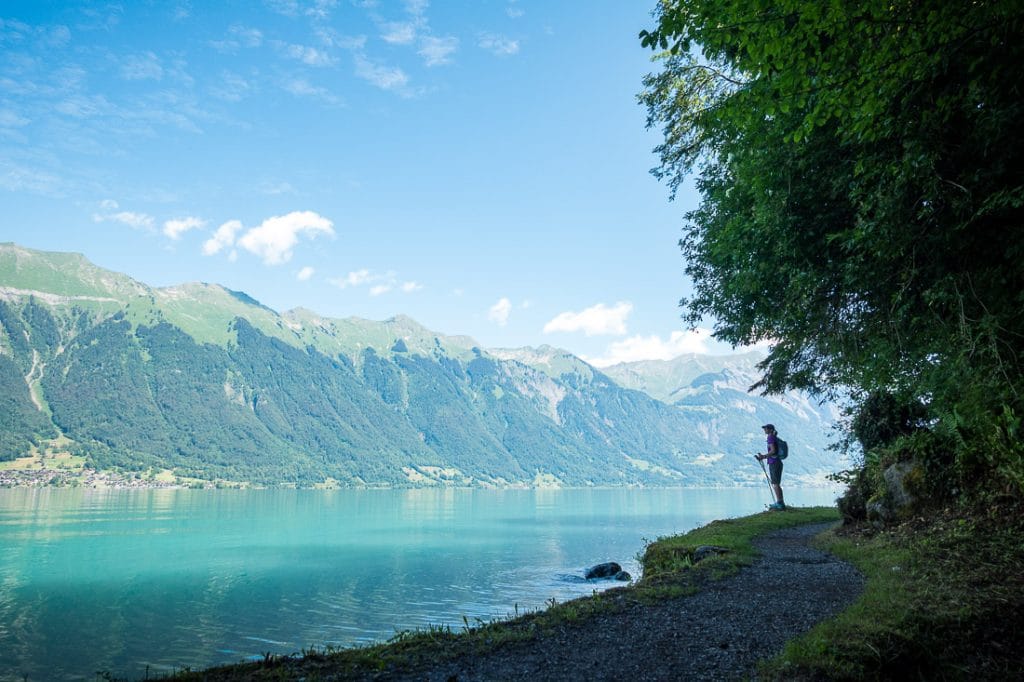 We started in Iseltwald, on Lake Brienz, just outside Interlaken. Up we went, 1700 meters of it. We had a SwissTopo map that proved surprisingly incorrect, the Swiss Map phone app that was a bit better, and not enough food. After reaching the end of the official trail, the paper map’s trail showed on again off again, we found it off all the time. No big deal, we’d go cross country. Things went fine until we found we were on top of cliffs and 50° snow slopes over hundreds of feet of air.

After some creative grass climbing, we reached a high ridge that bypassed the cliffs and eventually dropped us down to where we wanted to go in the first place. There, on a high flat terrace from which we needed to descend to another terrace, then yet again through a cliff band and the final 1500 meters of down. We were just getting started, meanwhile the sun had already started to go down. But wait, there is a cliff below us. We had heard there was a way although hard to find, and a ladder. A ladder? After some thrashing around in the brush along the cliff’s edge, we spotted a cairn that marked a tiny passage into vertical terrain. And then we found the rope. “Seriously?!” Even by Swiss standards, this was a piece of work. Swinging around on ropes on wet, slimy 70° rock, we made it down about 70 meters until we arrived to the ladders. From there we awkwardly climbed down, all the while over-gripping for fear of our slick running shoes sliming off the smooth rungs.

Once down we found ourselves in a kind of paradise, like we’d passed through a secret door into the magic kingdom, one that we shouldn’t even know about. The large grassy terrace we were on was walled in by impenetrable cliff bands (except for our wonky way), and below another cliff who’s passage we’d yet to spy. On this terrace sat one house and about 40 bell ringing cows. It was the Sound of Music, and then some.

After eating our last food we found the exit notch, an incredibly steep and narrow trail. While the way wasn’t so steep for us, it must be a mighty feat for the cows that have to go up and down it each season. Once through, it was all trails all the way back to the car. By the time we were down it was still just barely light. There, we happily discovered we’d parked right next to a fountain that served as a much needed bath before jumping in the car and heading home. 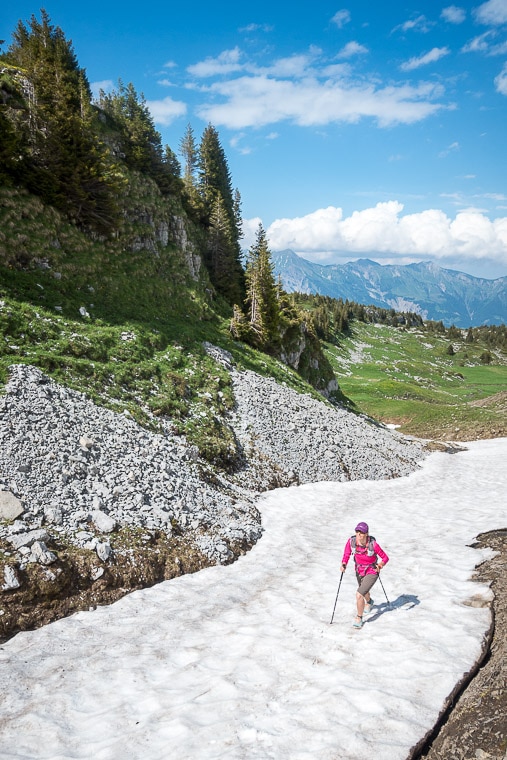 After a seemingly endless march through what felt like a jungle, then thick forest, we popped out of the trees. Here the trail mostly ceased to exist. 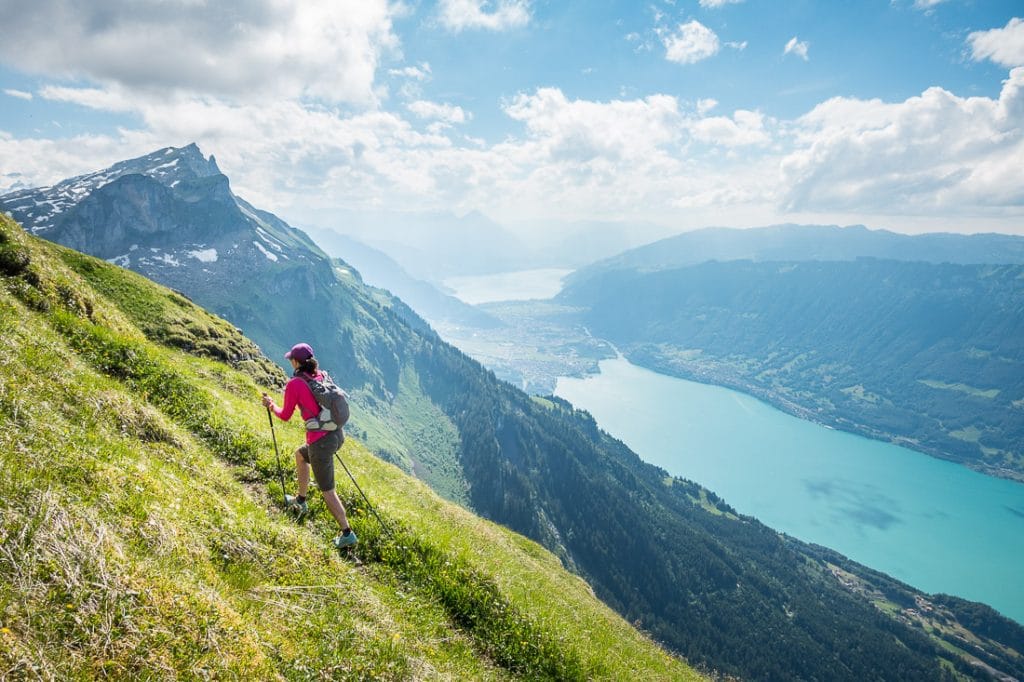 Back on a section of trail for a good 30 meters and time to make a photo. Down below is Lake Brienz, our starting point. Further back is Interlaken living up to it’s name between the lakes 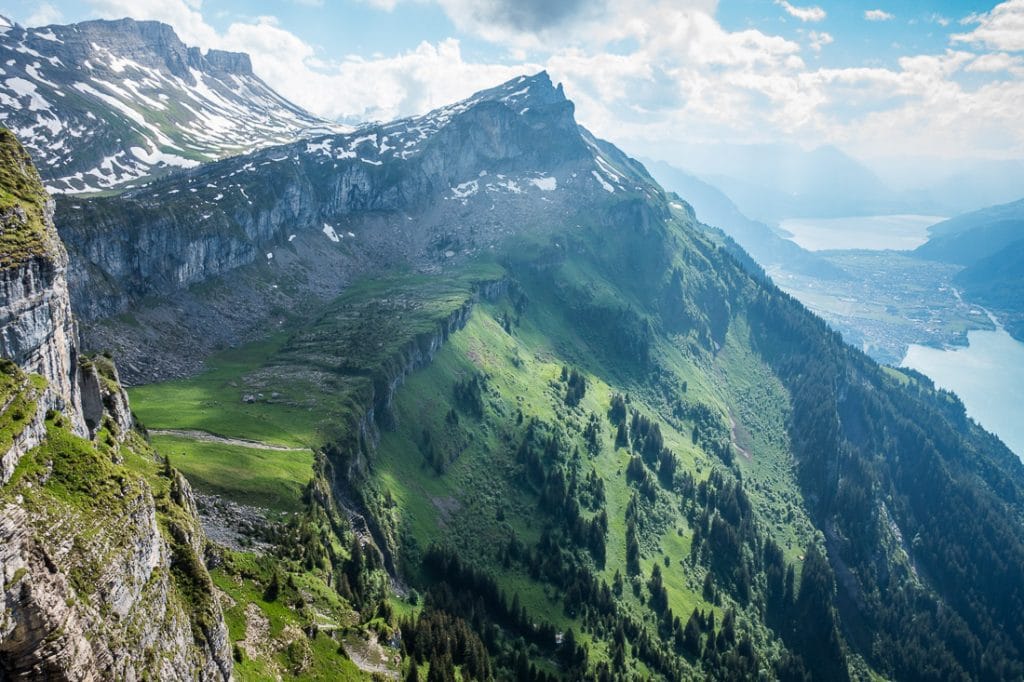 This was our view down to where we needed to go. That green terrace is the paradise we’d soon pass through. The cliff band above it is what we needed to downclimb, and the next cliff band below the terrace, downclimb number two. We had our doubts looking at all of this. 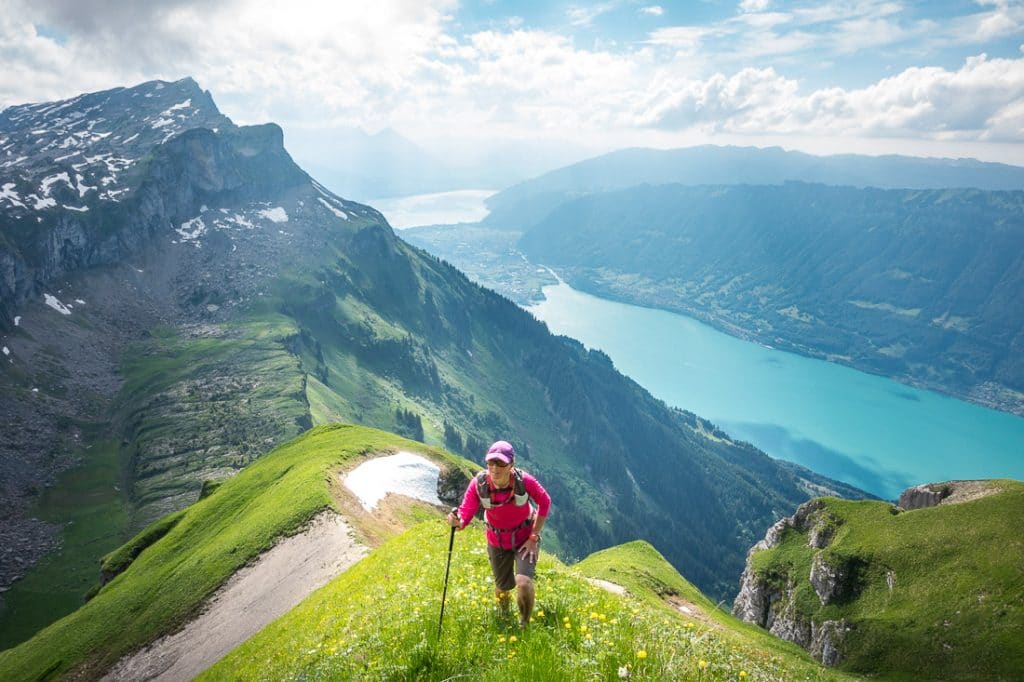 After discovering our “trail” blocked by steep snow and impossible to pass, we headed up steep grass and flowers to the ridge’s highpoint above. All while hoping it would allow passage to where we still needed to go, we found it one of the most beautiful places we’ve ever been. 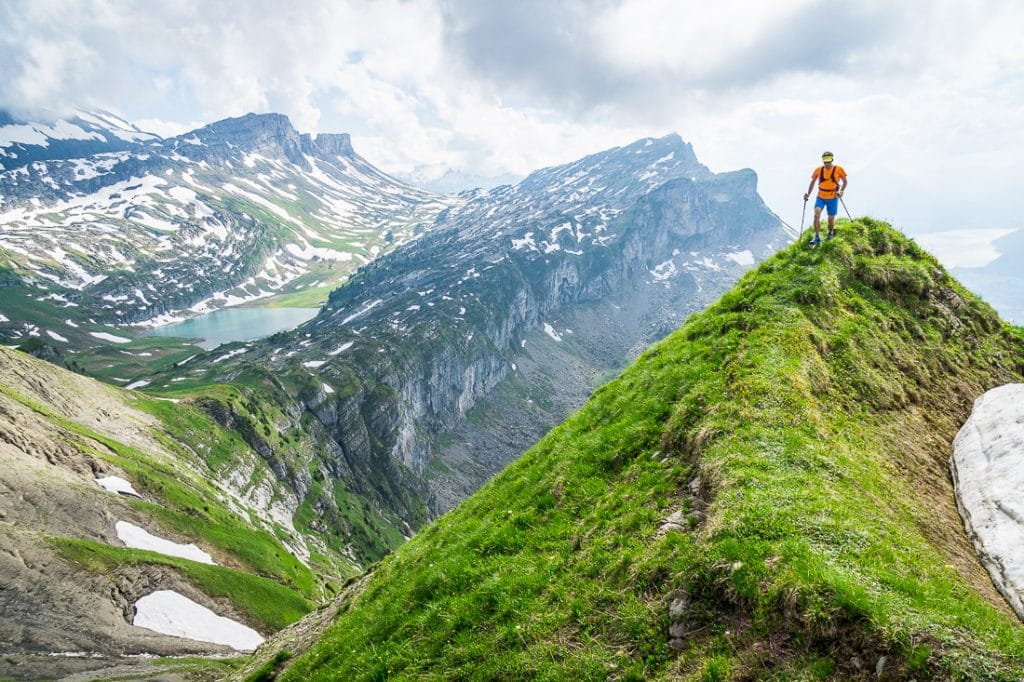 Once on top of the alpine grass climb, we had a good view of our destination, the lake on the left side. And from there, the faith that we could pass the cliff band below it. Do you see the one weakness in the wall? Just above the biggest snow patch is the way. 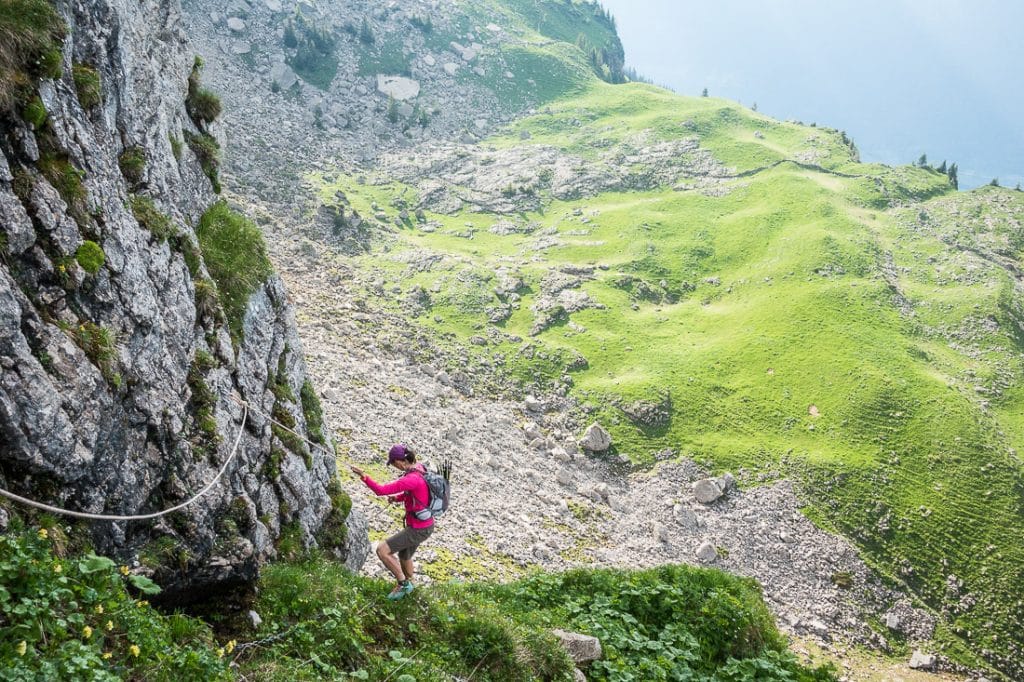 We found the way and held on tight 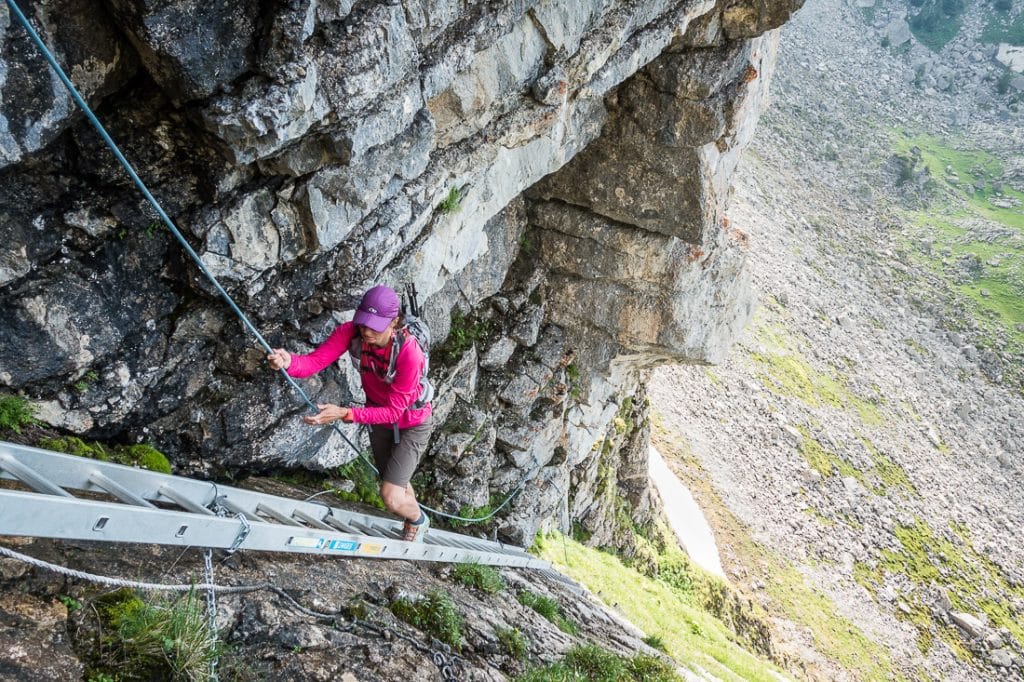 After the ropes came the ladders, slippery ladders 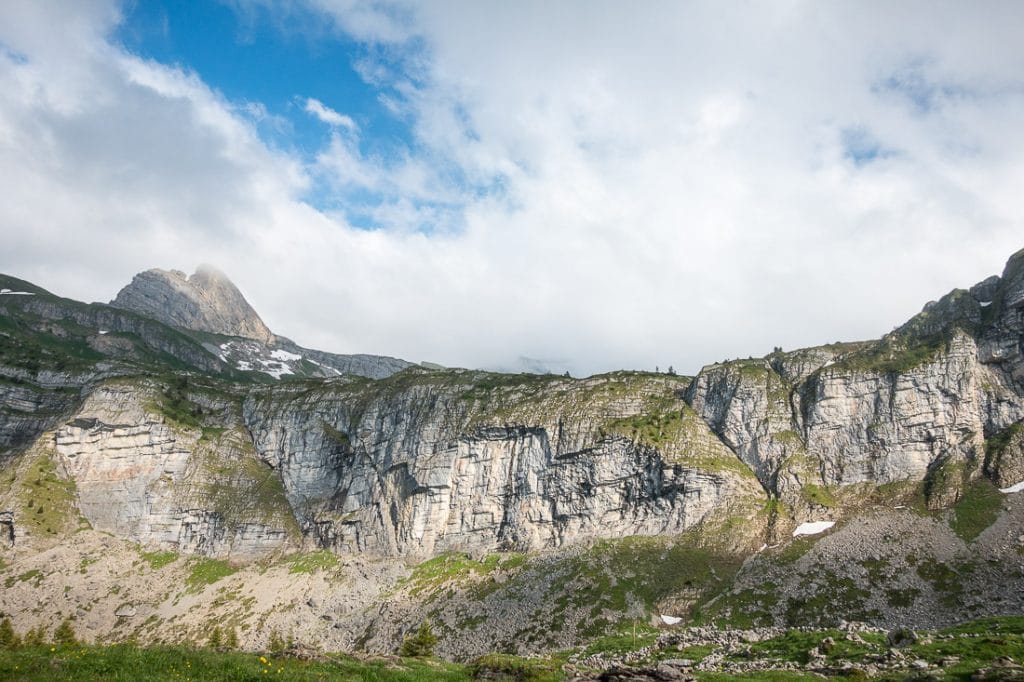 From down on the terrace we laughed at who came up with the idea to make a trail through the rock wall, “Right there, above that snow, in the diagonal corner. It’ll go!” 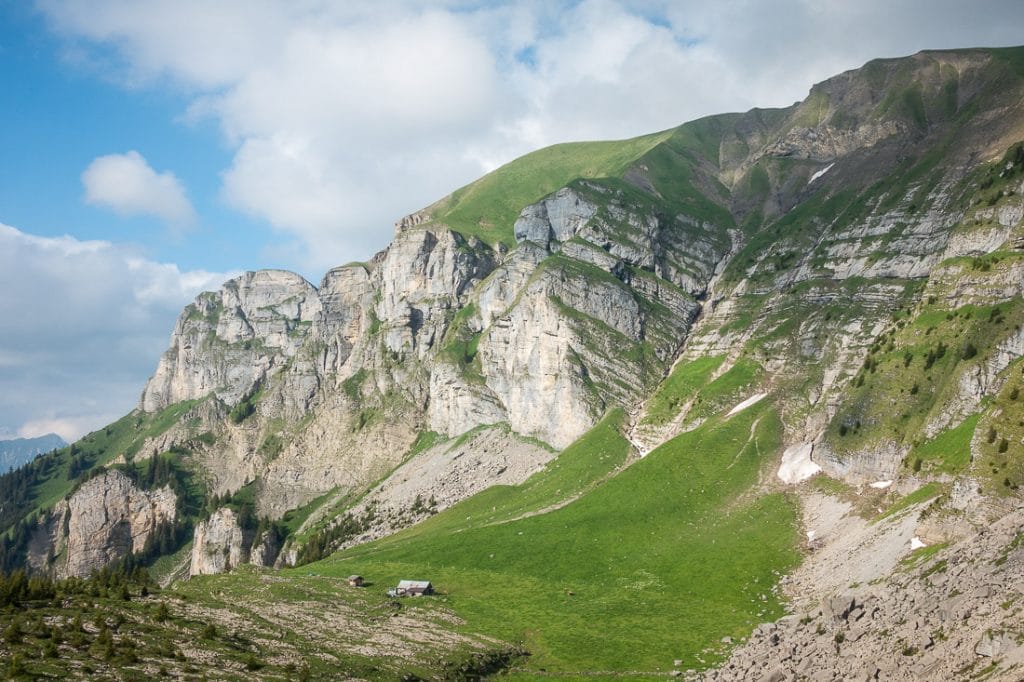 And looking down the length of the terrace… paradise. While up above is the entire ridge we had to traverse. 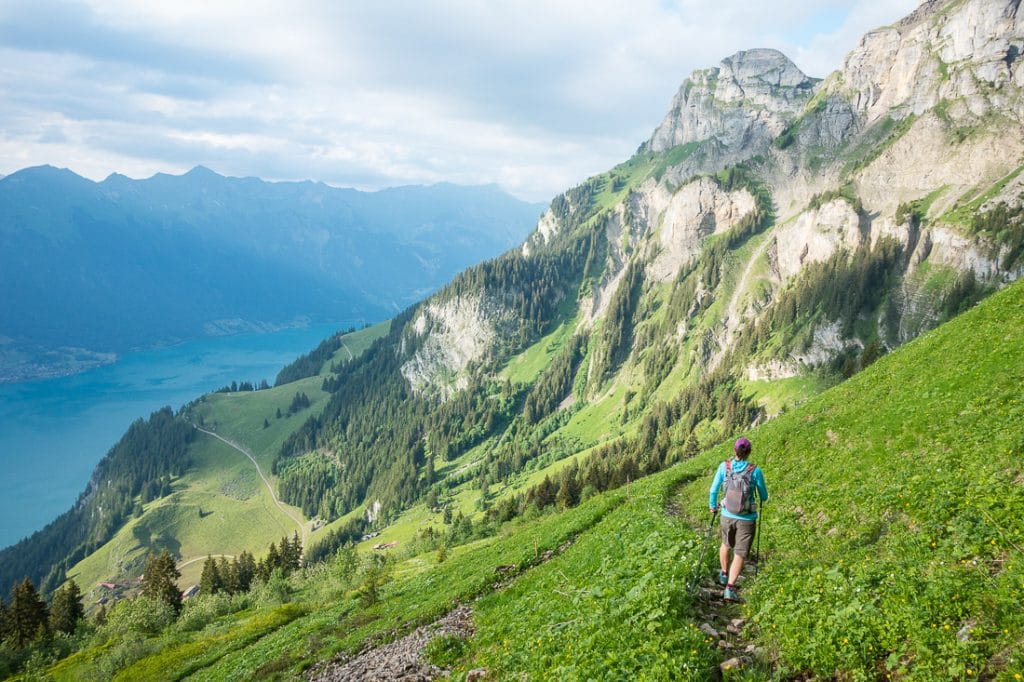 After descending the second wall we were back on trails, the sun popped out from beneath the clouds, and we scurried down to where we started. A perfect, perfect day on a route no one in their right mind would ever do.