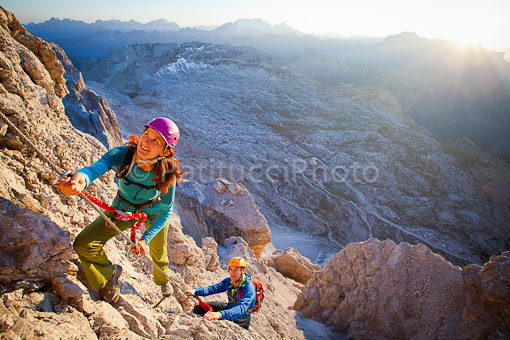 The Via Ferrata Tomaselli 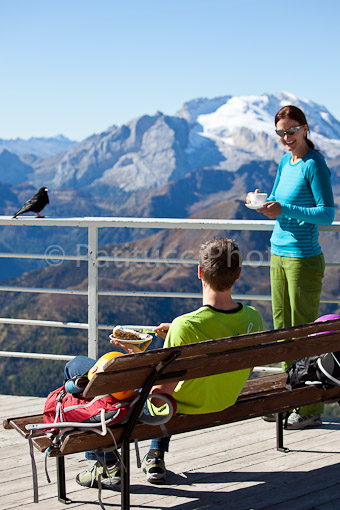 With the year’s best weather currently playing out, it was perfect timing when Petzl called needing us to shoot a Via Ferrata for their next catalog. The need; a classic Ferrata, great light, fun people and of course a dramatic landscape. I asked our good friend and Mountain Guide Alberto De Giuli what would the most photogenic Ferrata in the Dolomites be – he was quick to recommend the Via Ferrata Tomaselli, not only is it’s position very dramatic, but it is arguably the hardest in the Dolomites. Perfect, sold!

Our plan was to climb the route late, timing our arrival to the top for sunset light on the last section below the summit. Alberto suggested we take a rope so I could rappel from the top and shoot from the side. Once finished, we’d down climb the route and shoot the absolute last light on a lower section.

Our good friends Christof and Evi (of our Sicily trip photos) joined us for the fun. First stop on the way to the Ferrata was an obligatory visit to the hut with the best views in all the Dolomites, the Rifugio Lagazuoi, where owner Guido Pompanin treated us to a breakfast of fresh apple strudel and cappuccinos that we could enjoy out on his deck. Ah… bell’Italia.

Once caffeinated, it was off to work. In the end, our plan came together perfectly. A happy client, happy photographers and a great day for everyone. 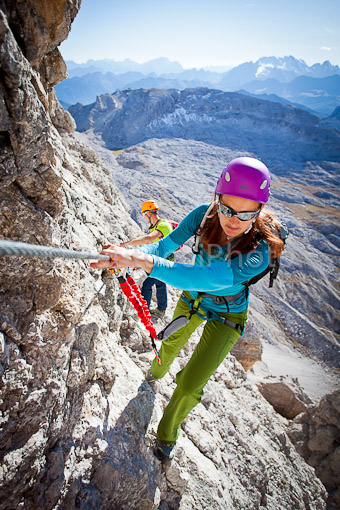 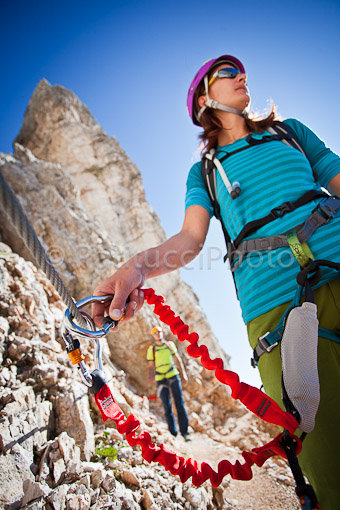 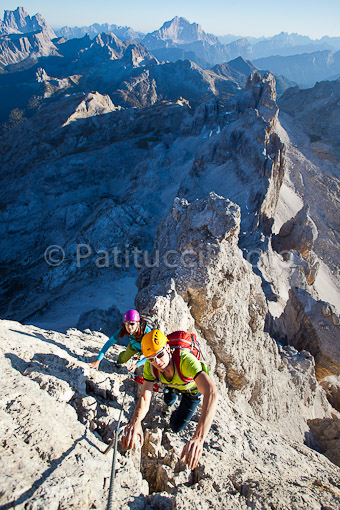 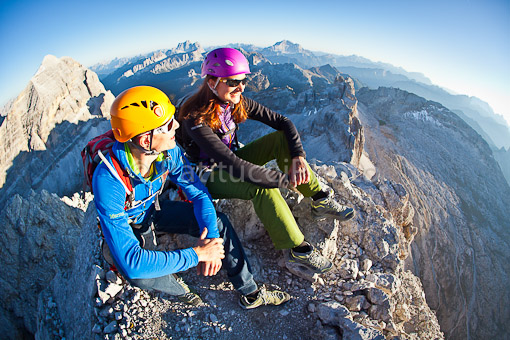 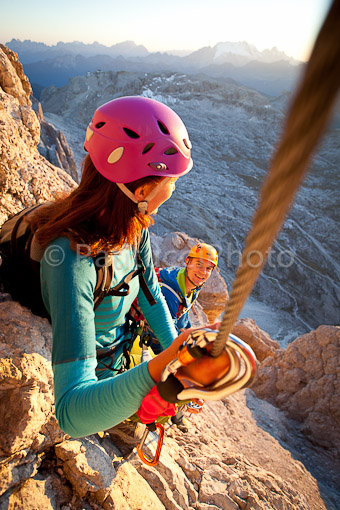 What is a Via Ferrata?

These “Iron Ways” started as paths cut into the sides of some of the rock faces in the Dolomites during World War I. Soldiers were able to get around on vertical walls thanks to cables in place for security. These days, the same style is used with modern gear to allow more adventurous hikers to access rock walls and ridges that previously only climbers could do. It is tremendously popular throughout the European Alps and Dolomites, with literally hundreds of Via Ferrate spread throughout the ranges. Petzl makes a wide range of systems that allow Ferrata climbers to easily take advantage of the in place cables and ladders found on these routes. More at the Wikipedia Via Ferrata Page.

Considering a Ferrata? If you are visiting the Dolomites, famous for some of the most beautiful Ferrate in Europe, and you want to try something new and quite unique – put a Ferrata at the top of your list. But if it is your first, and you have limited or no climbing experience, guides are available to take you up and get you down.