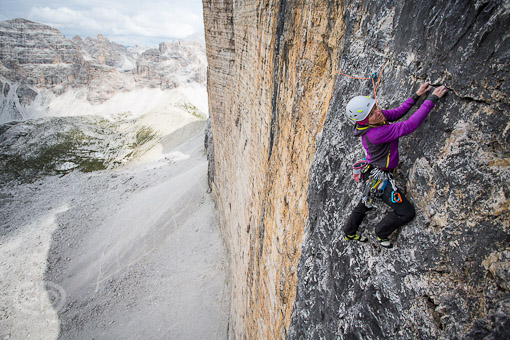 All four of us mashed ourselves against the wall to minimize surface exposure as another Dolomite missile screamed by. Our nerves were fraying with the continual bombardment just meters behind our heads. The sound a falling rock makes must be one of the most horrifying, the explosion of nearby stone a close second. So it went as we made our way up the Comici Route on the Tre Cime di Lavaredo’s Cima Grande – one of the Six Classic North Faces of the Alps, and in this case, for one of the stars of our photoshoot, Swiss-American Mountain Guide Caroline Ware George, the last tick on this short but very difficult list. 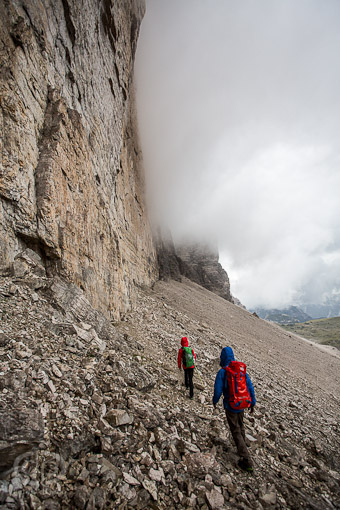 Her sponsor, Eddie Bauer’s First Ascent, had Janine and I at the Tre Cime di Lavaredo along with Caroline, her partner and fellow First Ascent Ambassador and mountain guide Kent McBride, and mountain guide and rigger Dylan Taylor. Our group was there four days to document this last climb of Caroline’s goal of climbing all six classic Alps North Faces. Our day on the route was stressful, not only for the falling rocks, but for the building thunderheads and distant booming thunder. Priority number one, safely get it done and get the images, priority number two, get down before the weather strikes.

With Dylan leading, I followed to get into place for the best images. Dylan is also a photographer and knew exactly what my needs were, where I would need to position myself in relation to Caroline and Kent and how to do it all quickly. To have someone like Dylan on the front made my life much easier.

“Holy shit, a huge one!!”, we all pressed against the wall as tight as we could as a massive stone came hurtling towards us. Much louder than all the others, we knew this one was serious, but wait, there was also something odd about the sound. Simultaneously, we all peered out just in time to see a base jumper plummet by and rapidly decrease in size as he tracked away from the wall, then the explosion of a parachute followed by an adrenaline induced scream. Thankfully, the base jumper incident also marked the end of our rockfall – we carried on with only the stress of thunderstorms. 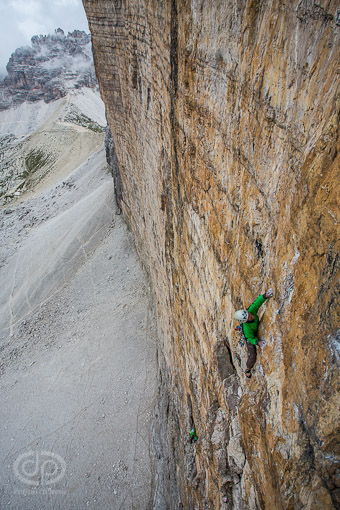 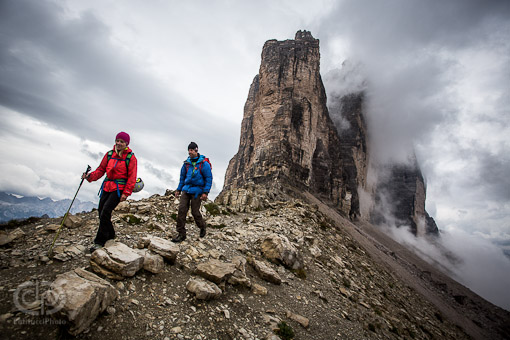 Caroline and Kent at the end of the climbing day

At the end of the day we made it down with full image cards, empty stomachs, and only our last two rappels being in the pouring rain. With everything packed away, we headed to the Rifugio Lavaredo under ink black skies and a driving rain. This would all just be the beginning of four days of disturbing things falling from the sky. First the rocks, then the rain, hail, and finally snow, all in great abundance.

The next day we woke to monsoon-like rainfall that would later turn to snow. Still, in all this nastiness, we had to get some things done. Besides, Hut Fever set in around mid-day, one can only drink so many cappuccinos. We geared up and headed out. Even in freezing rain, three professional mountain guides and two professional mountain sport photographers know how to have fun. We ran trails, we did a via ferrata and we cruised around through all the World War I trenches. It’s not often that one has the Dolomites, and especially the Tre Cime di Lavaredo, to themselves. 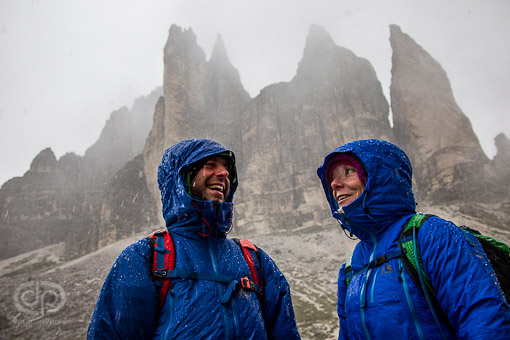 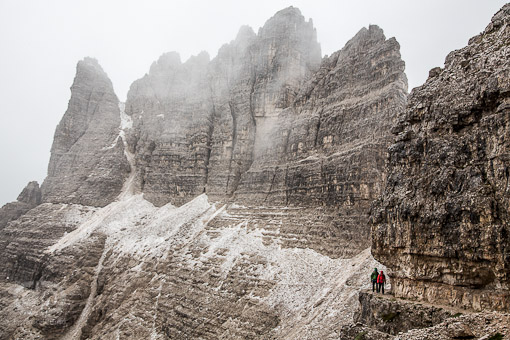 The Monte Paterno Via Ferrata in a cold rain and snow

In the end it all came together. After three days at Tre Cime we headed to Cinque Torri and Valle di Landro for some sport climbing. Steep, sheltered rock always cheers everyone up and it was with dry, chalky hands and a big pump that we called it good.

Many thanks to Caroline, Kent and Dylan, the amazing crew who helped make this a job well done even with the most grim conditions. And, to Eddie Bauer’s First Ascent line for keeping everyone dry + warm which = smiles. 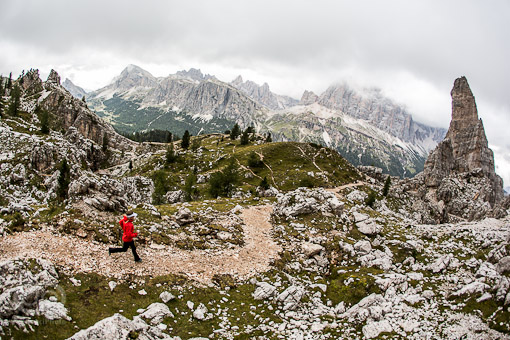 Caroline trail running in the Dolomites 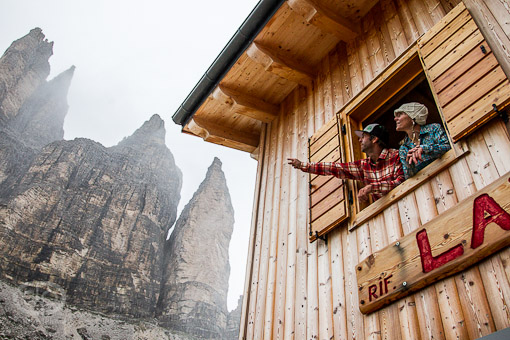 That’s what we could be climbing

Photography Tips in the Pouring Rain

My mantra for all things is “Keep it Simple”. This pays off when it’s pouring rain and you have to shoot. Fumbling around with lenses, film cards, etc… is no good, minimize all gear exposure to the weather. Here an assistant is essential. When it rains, you need an umbrella and extra hands. Typically, Janine and I both shoot at photoshoots, but for this Eddie Bauer project one needed the other just to keep it all dry.

Having some non-synthetic cloth is critical for drying both lenses and hands. Synthetic tends to smear, natural fibers absorb water on lenses, but be careful the cloth doesn’t get grit on it or you’ll be scratching your lenses while drying them.

The camera bag must be easily managed, here again I have found the Lowepro Flipside 15L to be the best all around pack with its rain cover and easy access.

As important as all the gear is, so too is your shooting plan and back up plan for locations. If one fails because of horrid conditions, you need to either know where you can go, or how to make the best of what hand your dealt. Most of all, you need to keep moving so everyone stays warm and motivated with a, “Let’s get this done so we can get out of here” objective. This is true for bad weather as well as hazardous situations.

For shooting in the vertical world, I like to go as light as possible, with one or a maximum of two lenses so as to avoid doing anything other than shooting while hanging so far off the ground. For this shoot, Dylan knew the lens I carried was a 17-40 so I would need to be relatively close to the subjects. We had to move quickly in two teams with Dylan and I above. I followed with Kent and Caroline right behind. When it was good I hung in position and was able to have them climb alongside and into my frame. Together we moved as a unit to keep communication easy and confusion to a minimum. Three UIAGM Mountain Guides along with my 15 years shooting climbing made for a silky smooth workflow. 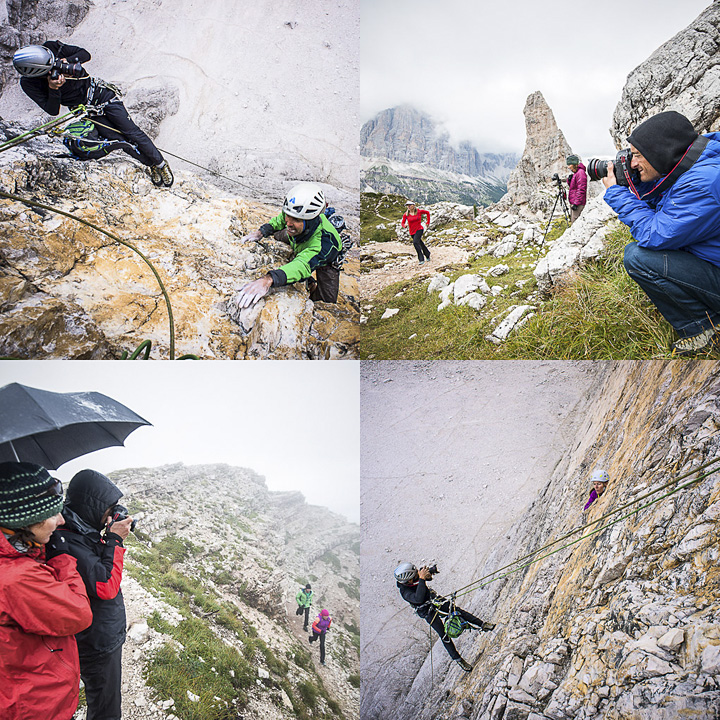