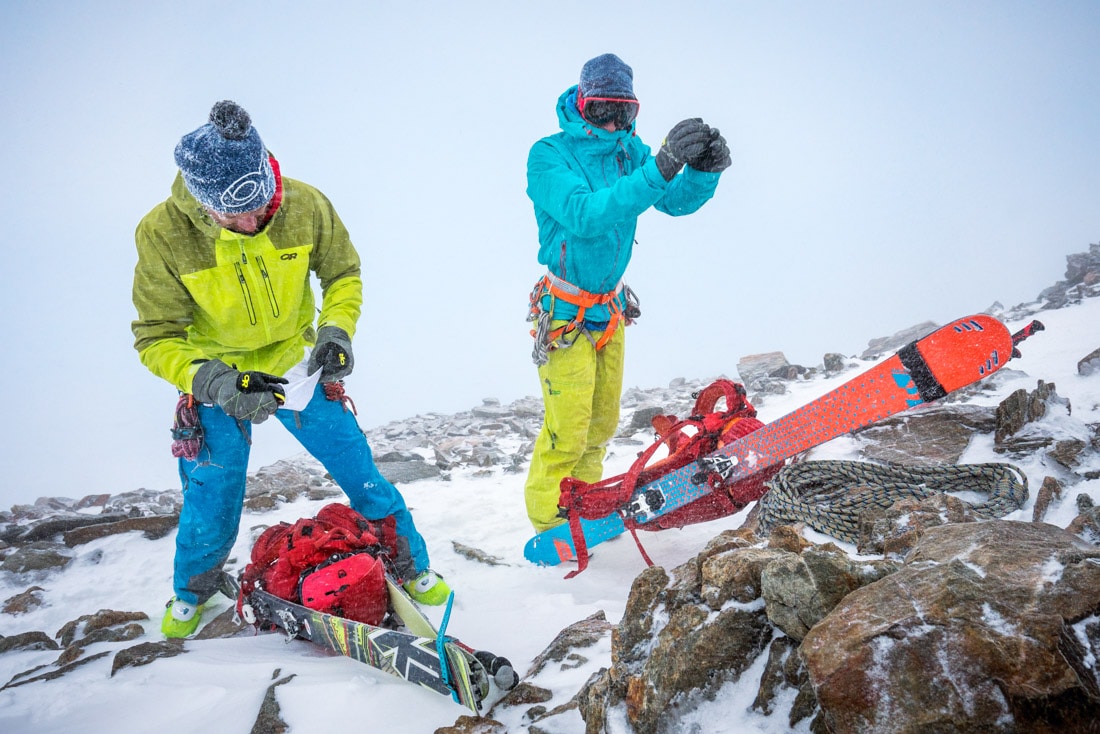 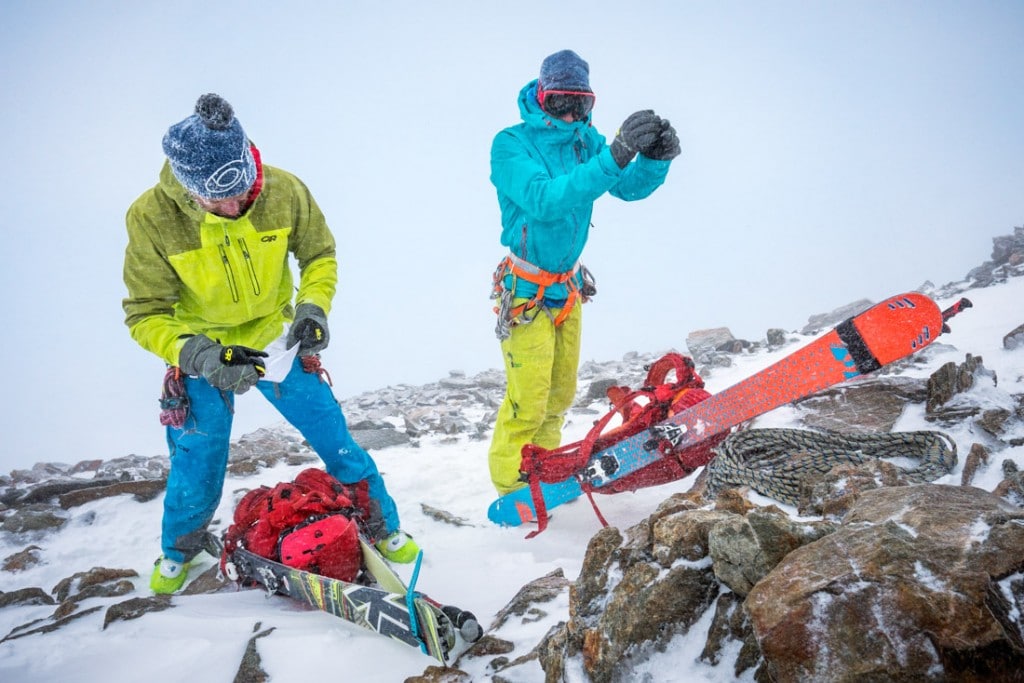 Cold, windy, and dark on the Finsteraarhorn

It can happen. A trip gone wrong. But while one person sees failure, another sees, and even appreciates, the experience for what it is. “It” is what you make of it. The Berner Oberland ski tour taught me some lessons.

Last week we set out for six days of ski touring in the Berner Oberland’s Aletsch Arena. For me, as a professional photographer, I had two magazines, one commercial blog, and this very website that I was shooting a story for. I also had packs and clothing to photograph for two brands we work with. It was a work trip. Plus, I just wanted to have some fun skiing big peaks. Our friend Brendan Leonard, of Semi-Rad fame, joined us as the writer. It would be his first ski tour in the Alps, and his first time deep in the Berner Oberland’s Aletsch Arena. The day before we set out, the weather forecast was great, everything was in place for a great trip.

For many years, Janine and I spent the spring ski touring seasons based in Chamonix. There, we’d often meet Americans arriving for a Haute Route. They would have their seven or eight days vacation and be utterly determined to return home successful. Some did, many didn’t. While people can prepare as much as they like, ultimately the weather and the conditions determine if you will be successful or not. Here again, it is how we look at success.

For Haute Route skiers, it means arriving to Zermatt on skis after 6 blissful days traveling amongst the biggest peaks of the Alps. Success. For me, it meant making the images I hoped for; little people skinning amongst towering mountains and cascading glaciers, dramatic sunrises while high on 4000 meter peaks, and of course a shot or five of people carving powder turns. We all have our expectations, and we set our baseline pretty high. But as Rob Machado said in The Drifter, “High expectations make for a poor traveling companion”.

And so after three days of moving over glaciers in a complete white out, I felt like I’d been robbed. Frustration was an understatement. On day four, my frustration morphed into anger. And this is where I went wrong. Meanwhile, Brendan, who’d come all the way from the US, and does not happen to have the Berner Oberland in his backyard, was still having a great time. The bottoms of the big peaks, which would occasionally show themselves, were apparently enough to impress. And the very fact that we were navigating the biggest glaciers of the Alps was also something to cherish. But I was annoyed. My expectations were letting me down, not the conditions. One night at dinner, as we were all expressing our disappointment, Brendan simply stated, “I’m just feeling pretty grateful to be here.”

Finally, the day came to do the 4274 meter Finsteraarhorn, the highest summit of the Berner Oberland and a peak I’ve long wanted to ski. Instead, we put a 1000 piece puzzle together at the hut, ate rösti, drank tea, and watched snow furiously pelt the windows. It was a great day.

In the end, we never saw the sun, never skied any big lines, and didn’t get to see the landscape we’d come for. The wind even knocked us over a few times, and we got scared getting too close to crevasses. Oh and there was a minor epic trying to get through that steep pass in a blizzard on our last day. But, we sure did laugh a lot. And that puzzle I would have never otherwise sat down for, was actually pretty good.

The mountains have all the ingredients for different kinds of experiences, and like that puzzle, it’s up to you to put it together. And if you screw it all up, hopefully a friend is along who can put things back into perspective.

When we got out of the mountains I told some friends the story of how this trip played out. Doug “The Old Grey Mare” Mayer of Run the Alps, who for years has been one of the producers of the American radio program Car Talk, summed it all up perfectly by quoting a favorite line of Tom Magliozzi: “Happiness equals reality minus expectations.”

To learn more about this tour, visit our Trip: Berner Oberland Ski Tour 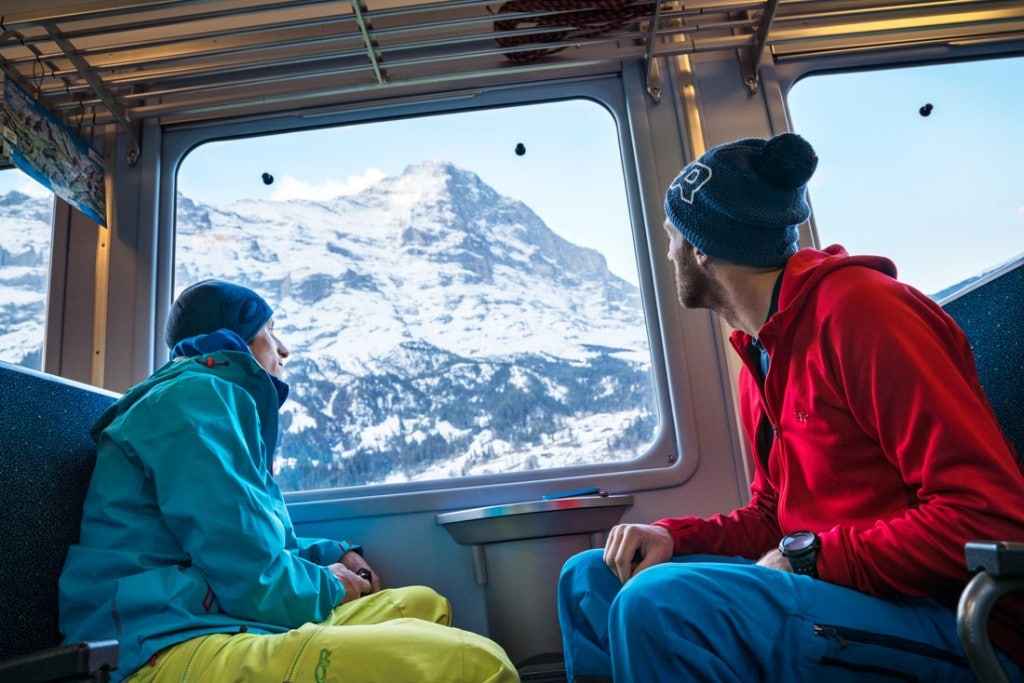 The trip started with the classic train ride up to the Jungfraujoch beneath the North Face of the Eiger. The fact that massive plumes of snow were blowing off the ridges didn’t escape our attention. 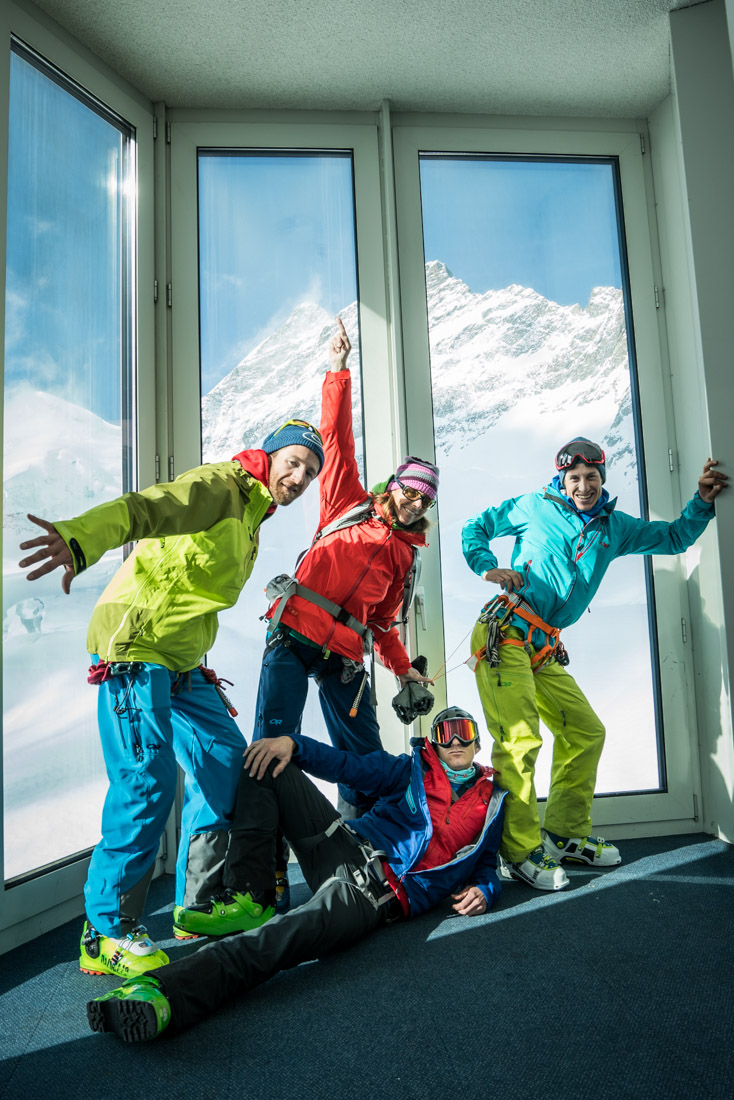 How ironic that the first, and last, blue sky we had was while we were making this photo in the Jungfraujoch Station 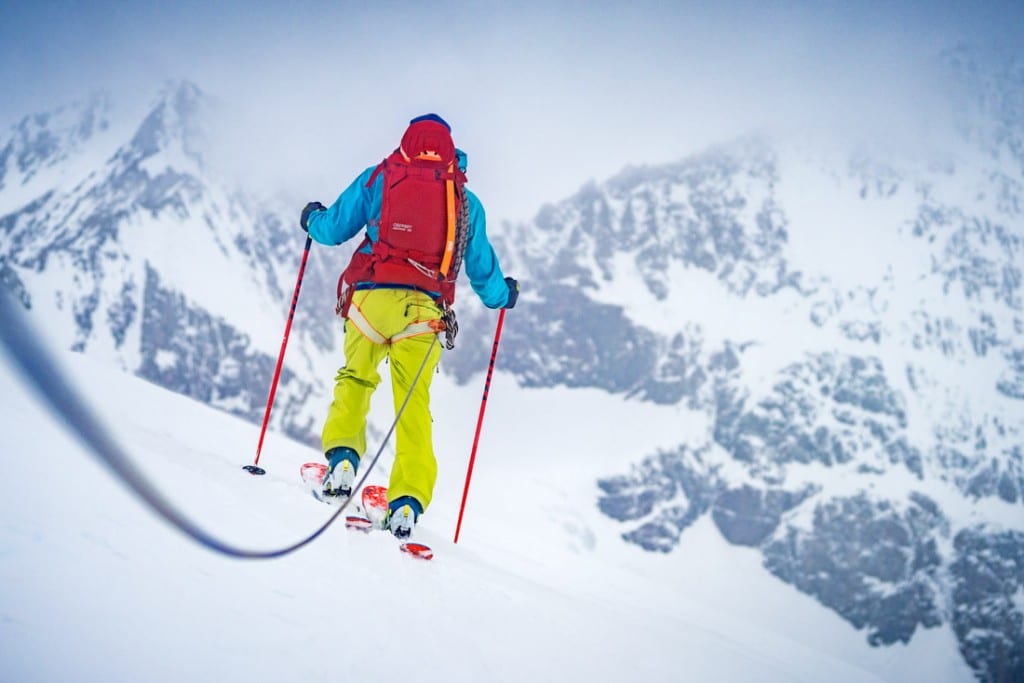 Periodic openings in the color white revealed what surrounded us. With crevasses always being a concern on glaciers, we stayed roped up most of the time. Simon taught us the trick of keeping a coil of about 6 meters of rope in hand, then to throw it ahead to define the surface of the snow. Slow, but effective to stay out of holes. 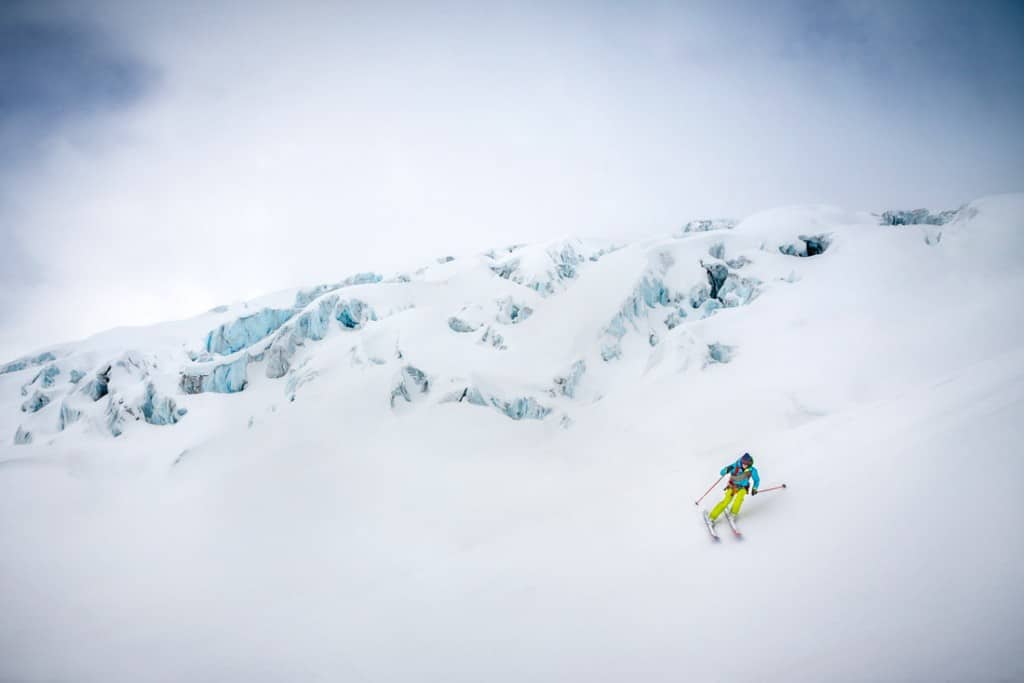 Our skiing was limited to what we could see, which was very little. Often we’d stop and wait for the clouds to part, then dash down while visibility revealed what we were amongst. 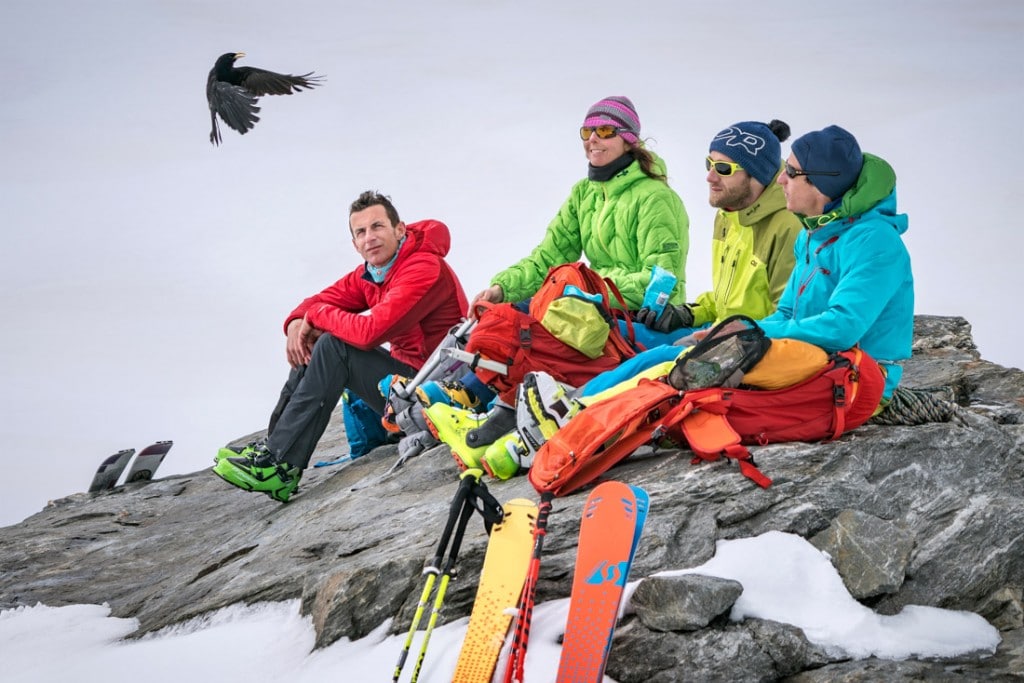 The Döles don’t mind flying in low visibility, and their radar always seems to work well when food comes out. 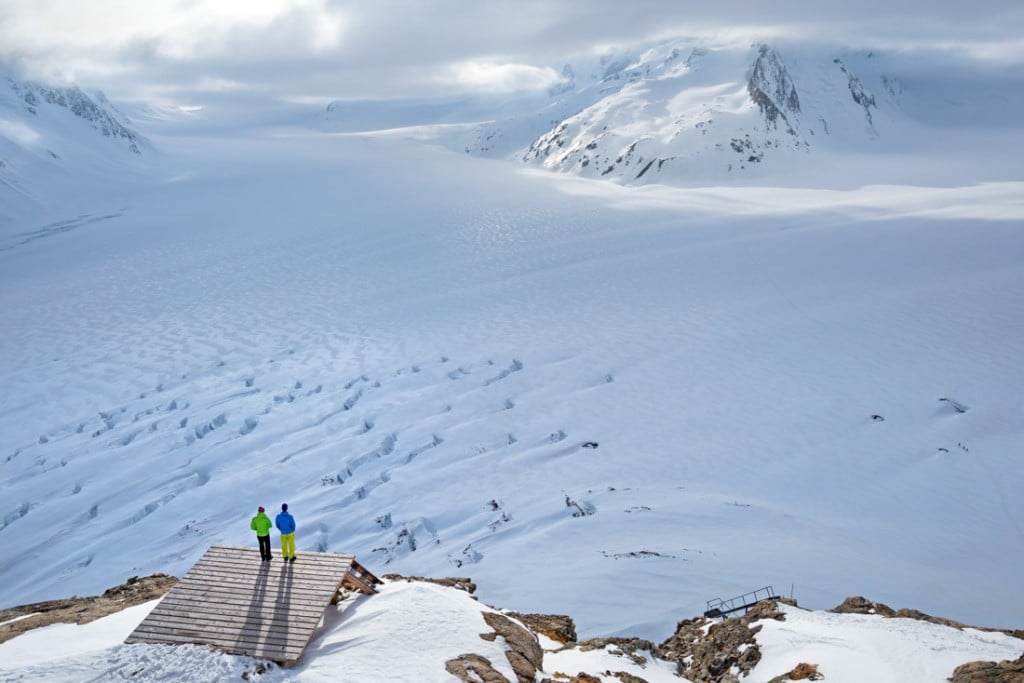 The Konkordiaplatz is a 2km wide, flat ice field where 4 glaciers merge into the largest glacier in the Alps, the Aletschgletscher. During our evening at the Konkordia Hut, we had a 10 minute window of views. 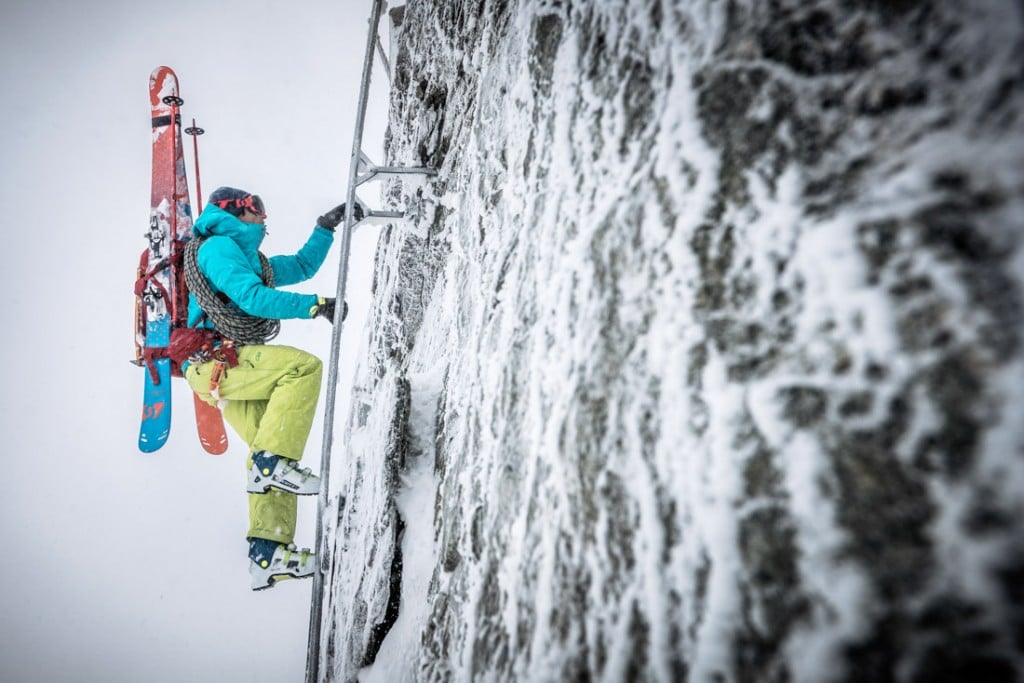 We arrived to the last hut of the trip, the Oberaarjoch Hut, in a raging blizzard. From the glacier, a ladder accesses the hut which was made exciting in 70km/hr+ winds. 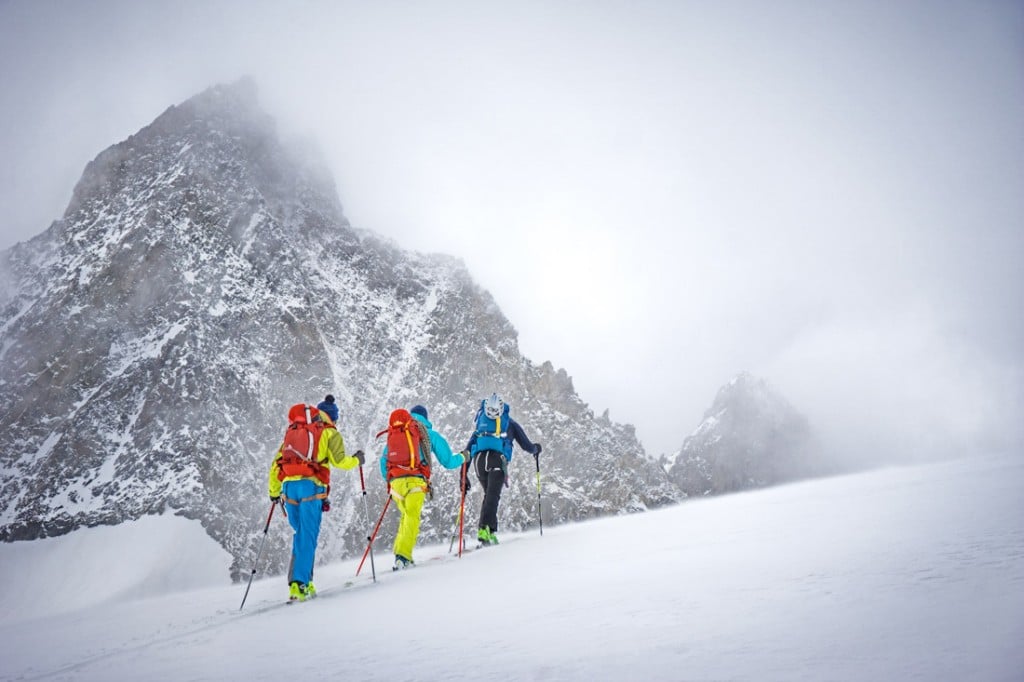 Headed up the Wysnollen, our one summit of the trip. 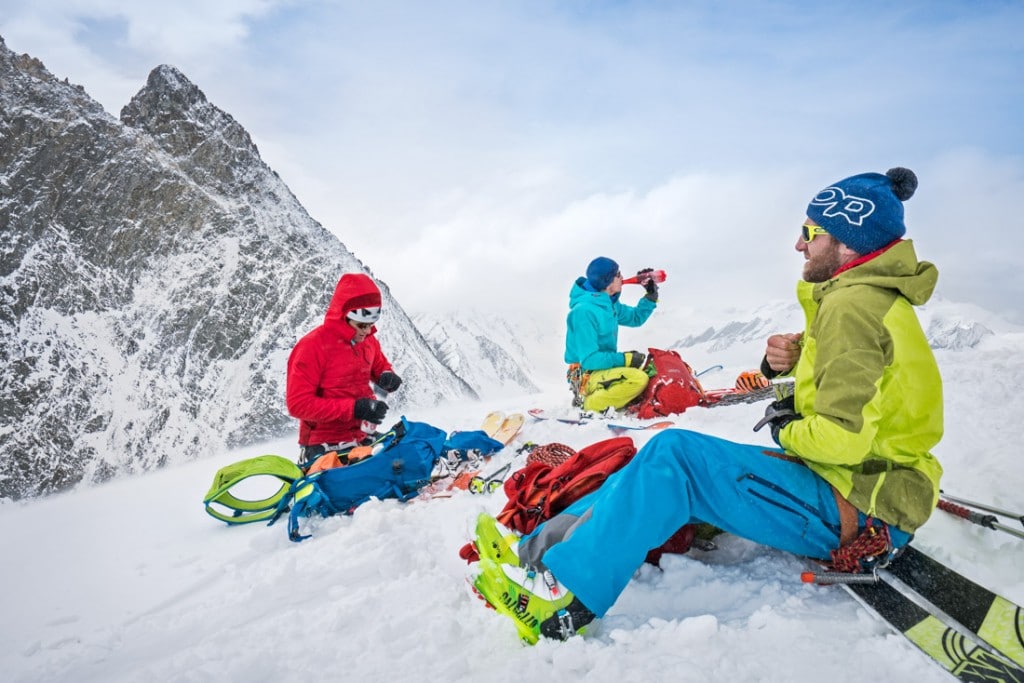 The summit of the Wysnollen was our best day with well some slight clearing, just in time for a few good turns off the top. 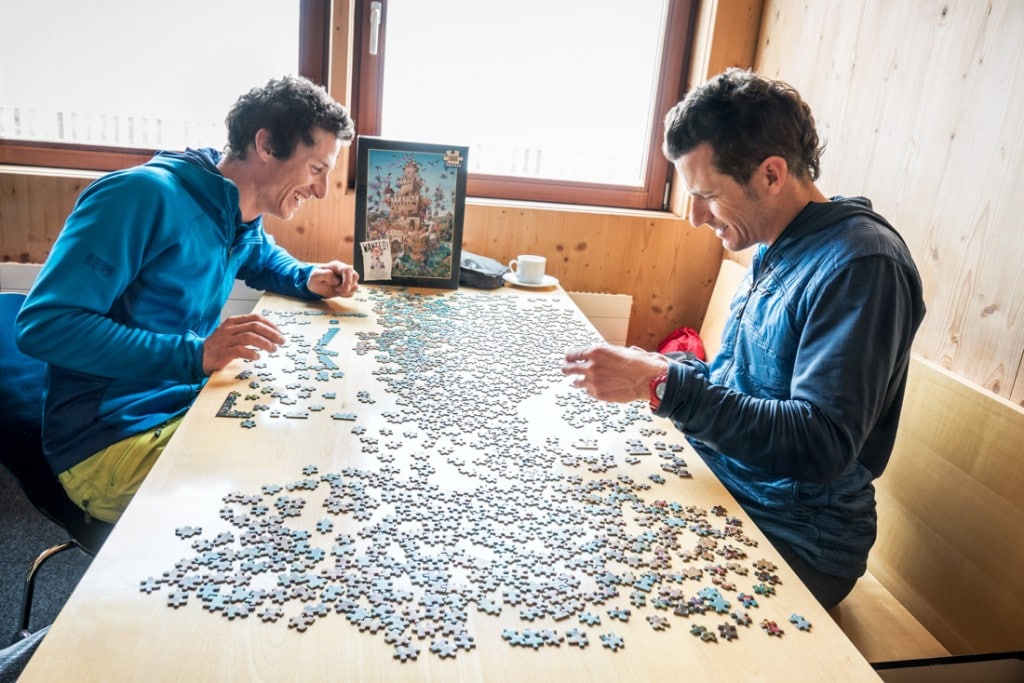 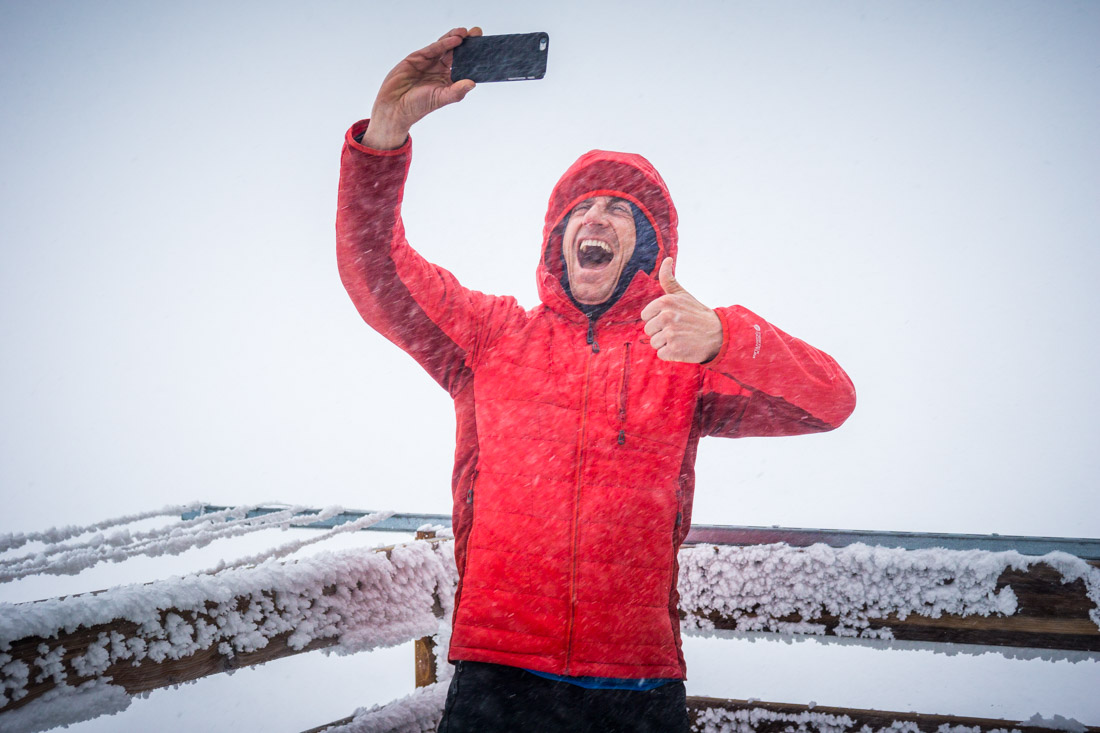