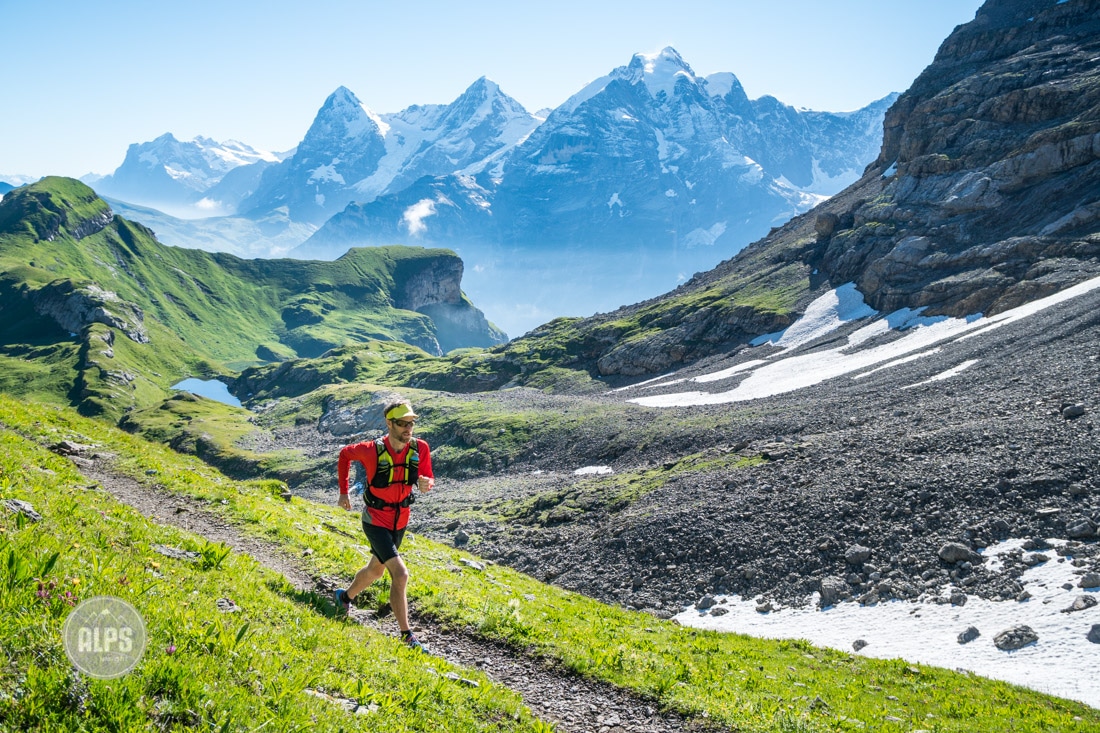 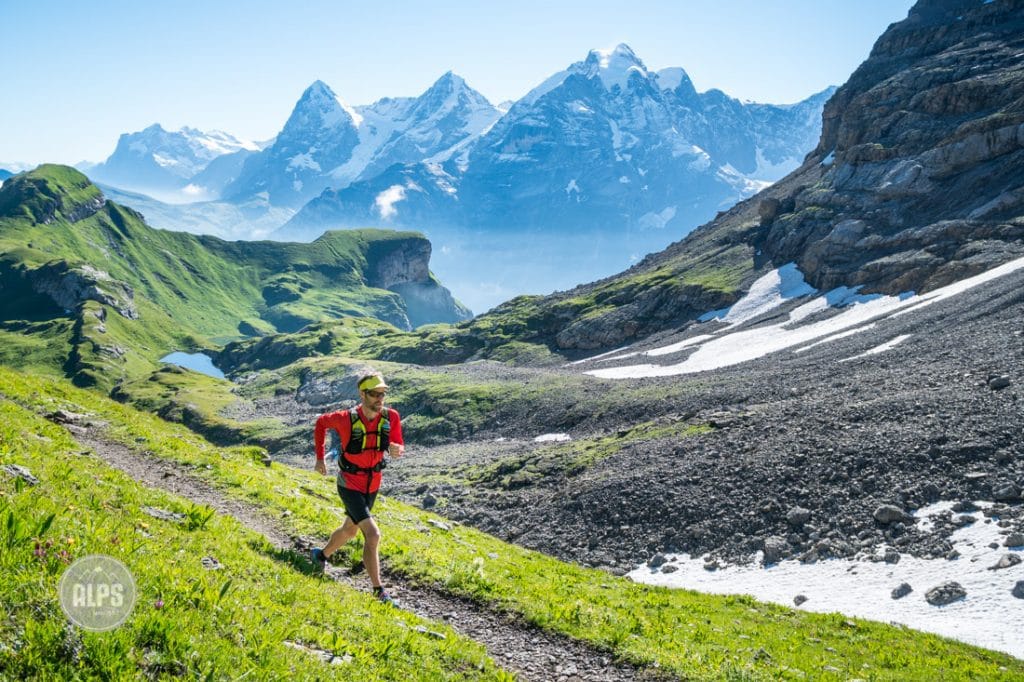 Alister on the final section of the first big climb up the Sefina Pass with the Eiger, Mönch and Jungfrau in the background.

Two of the most dramatic landscapes in the Swiss Alps are connected by a trail you’ll never forget. On that trail are 3 huts offering overnight stays and good food. From that trail are views of glaciers, 4000 meter peaks, the profile of the Eiger’s north face, and arguably the most scenic alpine lake in Switzerland. I had actually done this trail as part of a larger tour and knew how good it was, but I wanted to run it, in a day.

The thing is, it’s a hard trail for a one day push. The common way to do it, as a two day tour, is far less difficult because the two huge climbs and descents can be split up. For me, however, there is a much larger reward in pushing myself and dealing with a bit of suffering during a big experience. It makes it that much more rewarding.

And so together with a good friend, Alister Bignell, we set out from Stechelberg in Lauterbrunnen Valley on a sunny, summer morning. Seven hours later, after a coffee stop, two torts, and a dip in an ice cold glacial fed river – we would arrive to Kandersteg having experienced something very special.

While we ran this tour, the route is identical for hikers. From the back of Lauterbrunnen Valley is the sleepy little village of Stechelberg with a trail going straight up for 300 meters. It’s a rude awakening for the legs at sunrise but has the advantage of getting you up quickly. Soon you’re rolling alongside the Sefinen Lütschine, a healthy size river fed by glacial run off from the north face of the Gspaltenhorn, before once again rising steeply up to the Rotstock Hut, a combo dairy farm (“Alp” in Swiss) and mountain hut/restaurant. 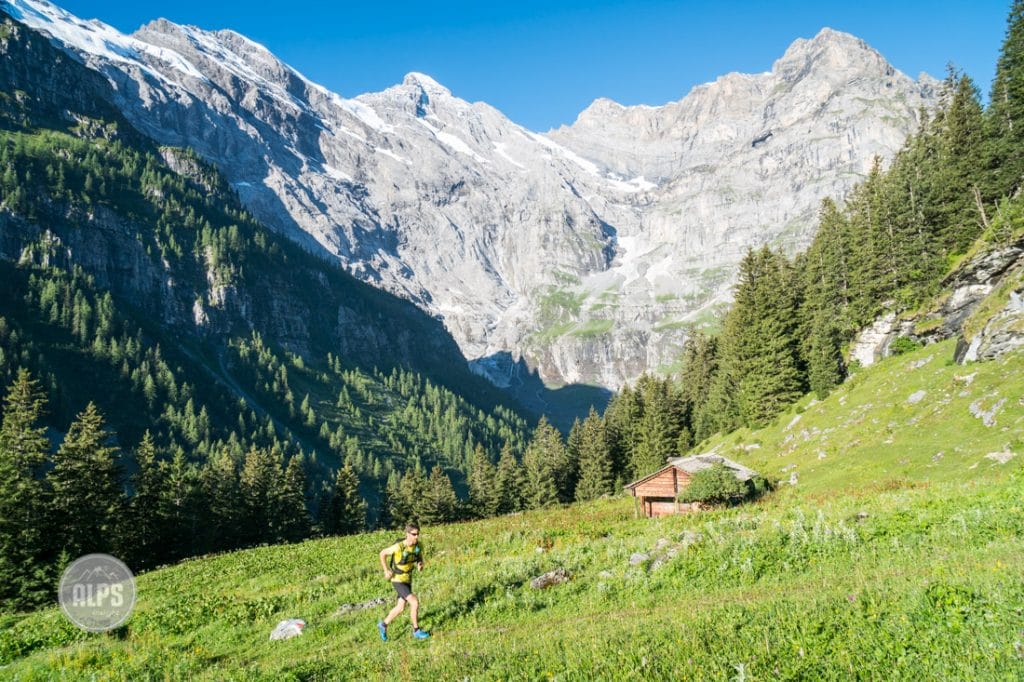 Much of the first climb from Lauterbrunnen is in the trees, but suddenly you are out, and it was all worth it. Nearing tree line with the Gspaltenhorn rising up in the background.

After the Rotstock Hut comes the climb to the Sefinafurgga, or Sefina Pass. This is where you get a unique view to the Eiger, Mönch and Jungfrau and if you’re lucky, the huge herd of Ibex that are often to be found on the pass. Once on the pass, your watch will reveal you’ve already had a big day with 1700 meters below you. But now it’s time to drop and get into much more remote, and alpine terrain. Following signs for the Gspaltenhorn Hut, you’ll descend south from the pass, not down into the green valley, but back towards the big mountains and glaciers. The Gspaltenhorn Hut itself is a detour and not actually on the trail to Kandersteg, but it is well worth the extra 15 minutes to get to the hut because if you are as lucky as we were, a fresh chocolate tort will be sitting on the counter. 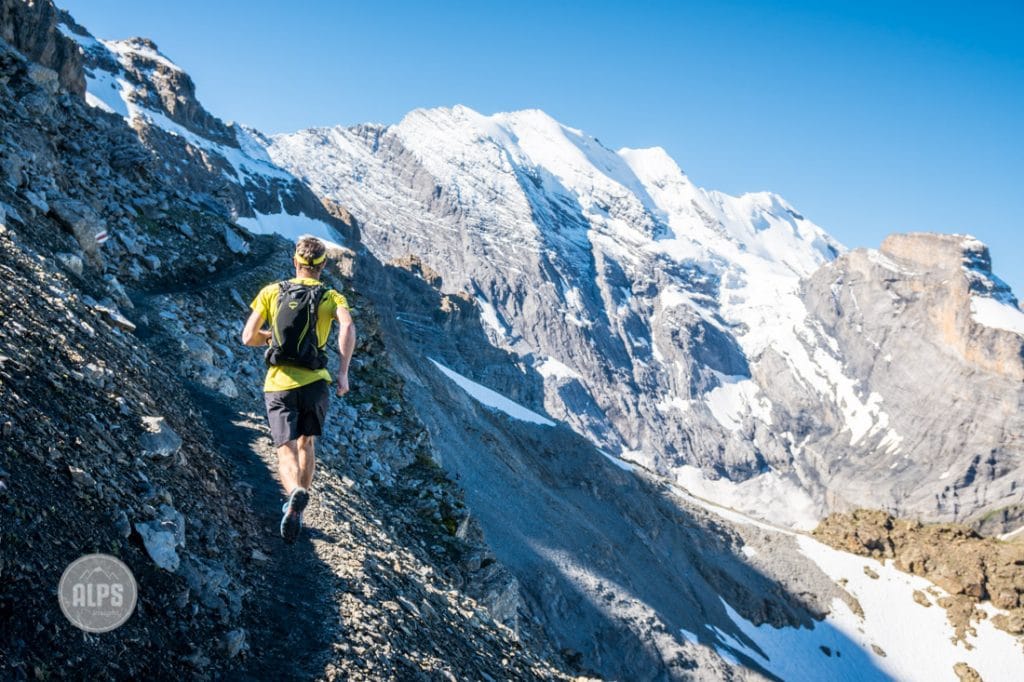 After Sefina Pass the trail enters a more remote, alpine area on the way to the Gspaltenhorn Hut. In the background is the Blümlisalphorn. 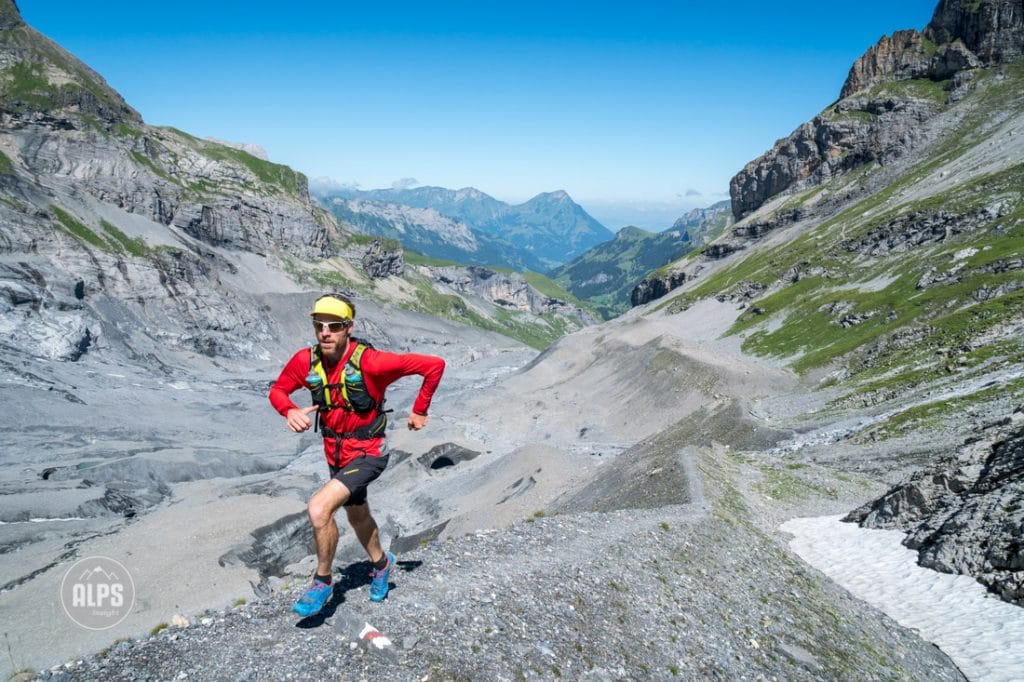 The detour to the Gspaltenhorn Hut is well worth it. In this photo, you have descended from the right side, and need to go up the left side. Here, Alister is running on the moraine above what little remains of the Gamchigletscher, note the arch in the ice beneath the rock piles.

After the hut you’ll continue to the descent to the bottom of the glacial valley where you’ll cross two bridges over deep gorges raging with glacial meltwater. From the valley bottom, at the terminus of the Gamchigletscher at about 2000 meters, you’ll start climb number two to the Blümlisalp Hut at 2834 meters. I have done a lot, really a lot, of climbs in the Alps, and this one has to be one of the steepest, most sustained trails I have ever done. For us the trail was packed with hikers, but most were sitting trail side eating and drinking and taking a break from either pounding their knees in descent, or burning their calves in ascent. For us, we had a sizable fan club bottom to top many of whom gave us the traditional “hopp hopps” on our way past. A sign advertising ice cream at the hut greeted us on top. 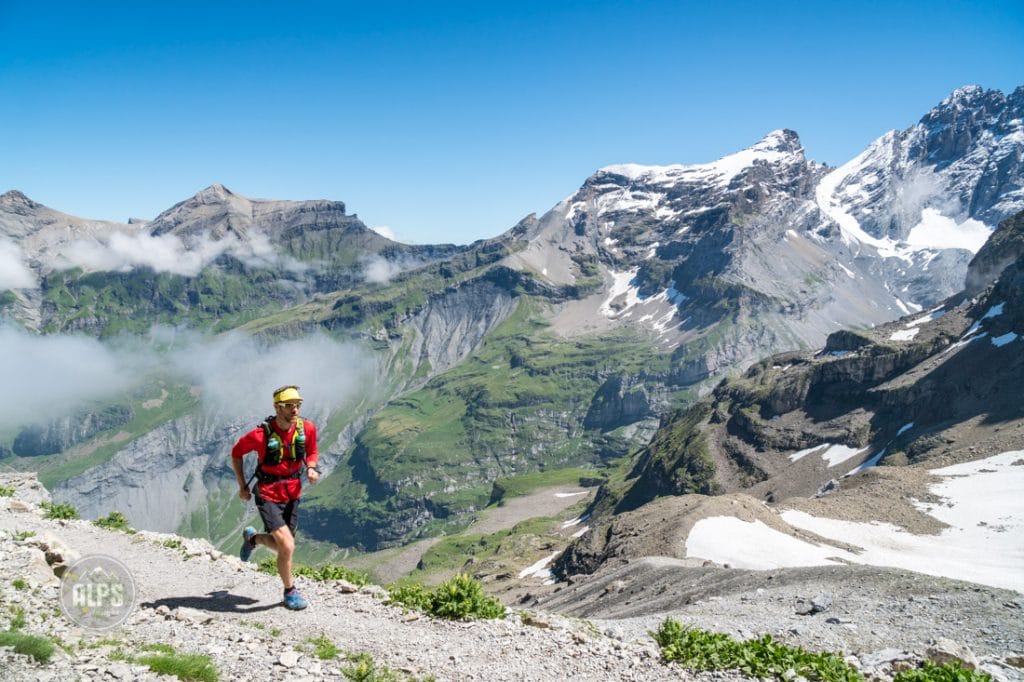 The only flat piece of trail on the climb up to the Blümlisalp Hut. In the distance is the broad U shaped pass of Sefina which we passed on the top of our first climb from Lauterbrunnen.

The Blümlisalp Hut sits right on the pass below the mountain of the same name, while far below in the distance is the tiny, but bustling, hiker’s town of Kandersteg. 1700 meters of descent in about 10km awaits. The highlight of the descent comes at the Oeschinenesee, a turquoise lake surrounded on its east shoreline by massive cliffs rising to the peaks nearly 2000 meters above! This is one of Switzerland’s gems, and thanks to easy access, extraordinarily popular. Our running pace came to a screeching halt as we weaved through all the many ice cream carrying hikers and envied the sunbathers on the sandy beach. We weren’t finished yet.

The trail down from Oeschinensee to Kandersteg is mostly uneventful, we just had two things on our minds, a cold swim, and cold drinks. Once in Kandersteg we bought a selection of food then quickly found the easiest access to the small river passing through town. Finally, soaking wet and with stuffed bellies, we dashed for the train back to Interlaken, but not before grabbing a couple of espressos. A classic Swiss outing.

Approximately 40km with 2950 meters of vertical gain. My Suunto Move (sadly, with some GPS disconnection time) is here. 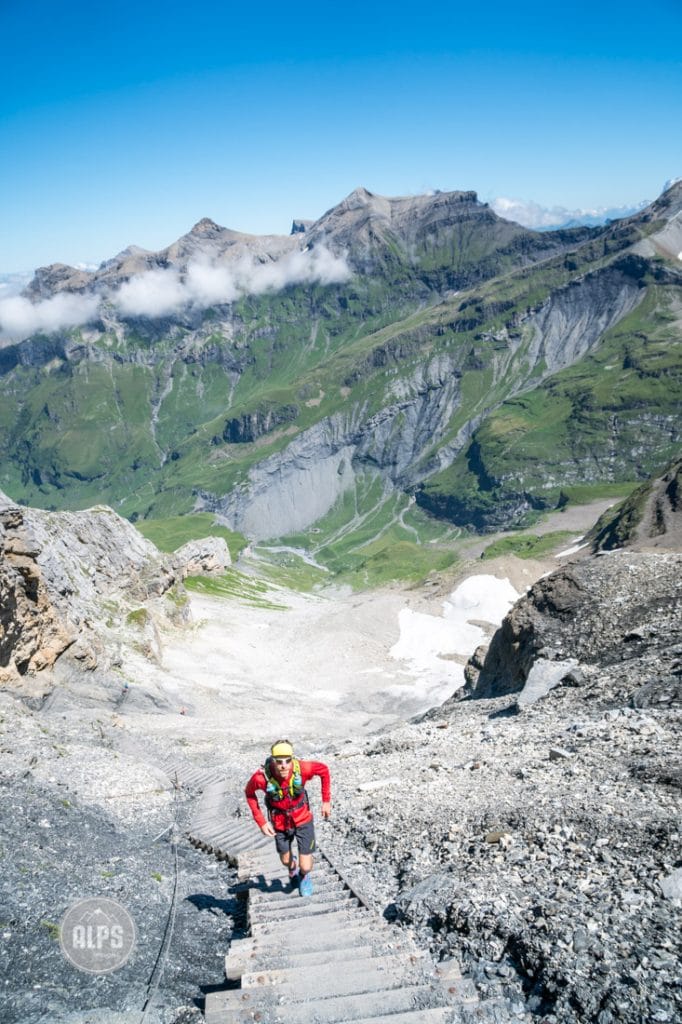 Steep! Nearing the top of the climb to the Blümlisalp Hut the Swiss gave up with switchbacks and simply built a staircase straight up. Yes, we started at the very bottom, 800 meters below. 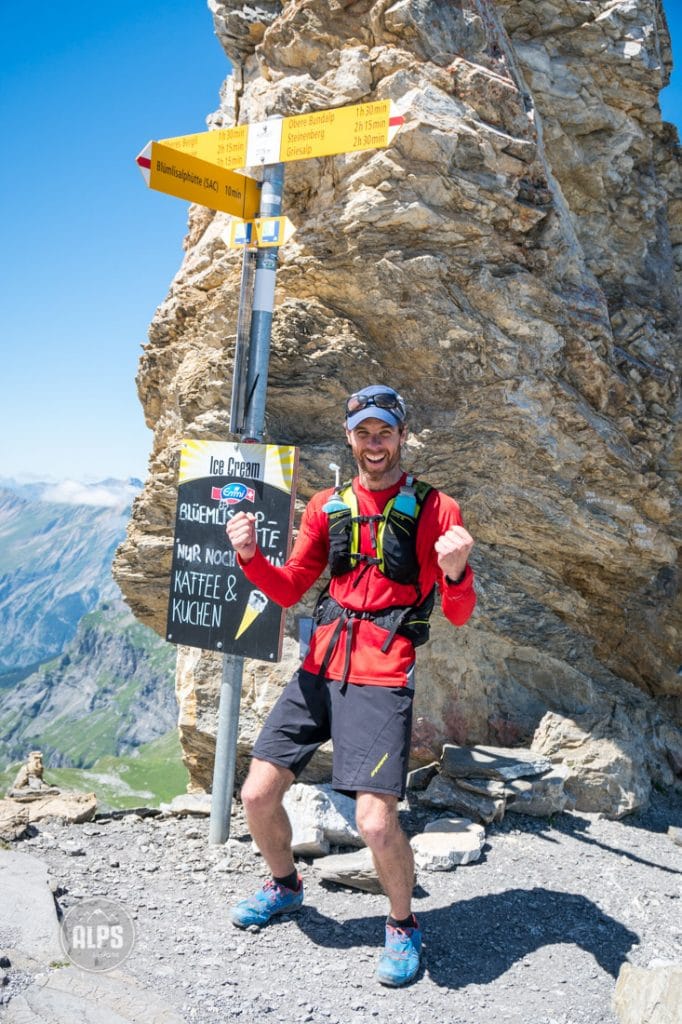 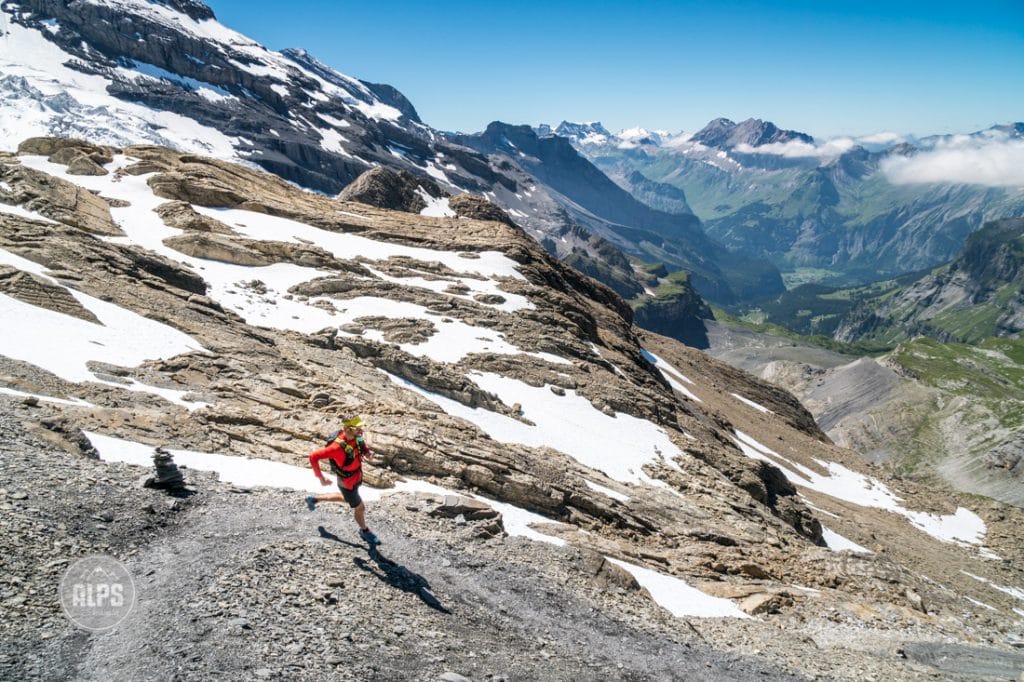 The first switchback at the very top of the descent to Kandersteg, far in the distance.