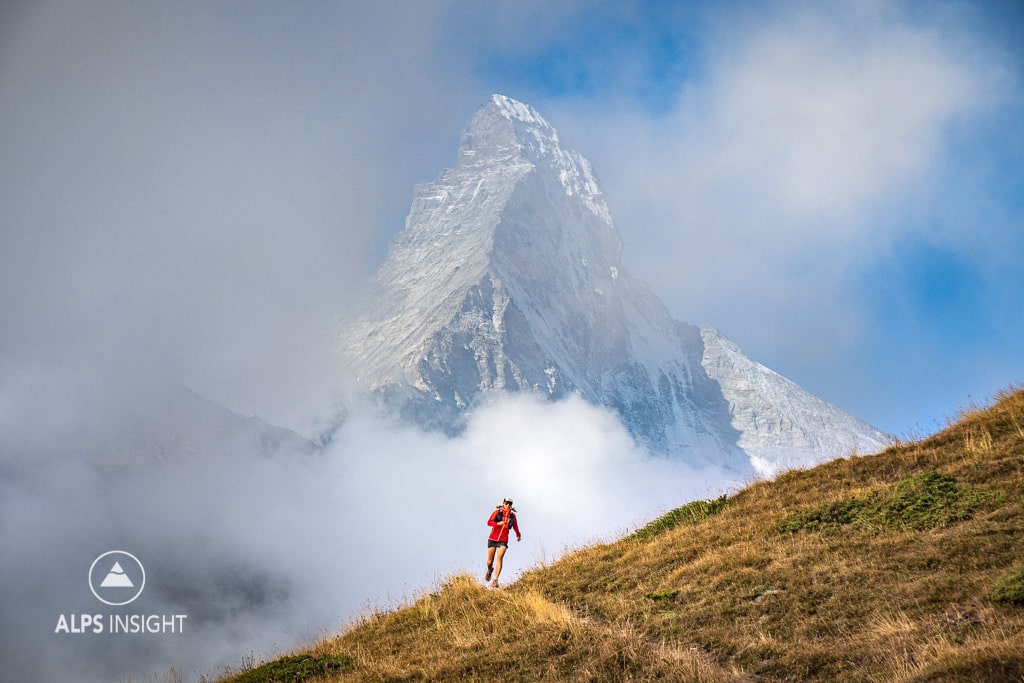 I still remember flipping through the pages of Uli Wiesmeier’s Rocks Around the World and vibrating with excitement. Even more, I felt determined. The combination of strong photography and vivid storytelling around a subject I was already passionate about closed the deal. It gave me a goal. I wanted to be a photographer and live the life of a climber. Now, thirty years later, I’ve done both. I have someone’s vision, and the fact that it was shared, to thank for this.

As a professional mountain sport photographer, I’ve tried to pass on that same feeling from my own vision. Thankfully, one of the most impressionable moments came early in my career. In the summer of 2004, Janine and I were in Zermatt, where we kept a flat to base ourselves for work we were doing throughout the Alps. One evening the phone rang. It was Howie Schwartz, a good friend and mountain guide.

“Are you guys in town?, he asked. “I’m with some people who’d like to meet you. Can you come to Grampis?”

Ten minutes later we found ourselves awkwardly standing in front of a huge table arranged to accommodate three generations of a family. They were here, in Zermatt, after hiking the summer Haute Route with Howie. The summer before, we’d shot the Haute Route for a feature in Backpacker Magazine and mentioned Howie as a guide.

The influence of what we could do with photography and storytelling hit me.

This family read that feature and decided to experience what we shared. They wanted to personally thank us for the inspiration. After all these years, I suppose they have no idea how much I’d like to thank them for what that meant to me, and how it kept me inspired.

A few weeks ago, fourteen years after meeting that family, we once again arrived to Zermatt. But this time, it was by a route we designed. After producing our Run the Alps Switzerland book in 2017, Janine, the route planner, was so enthralled by Valais trails and the idea of not just doing day runs, but immersing herself in the Alps for a much longer period, figured out a way to connect several of the book runs into one, long, multi-day tour. We called it the Via Valais.

Together with our good friends Kirra Balmanno and Bruno Schaub,our ALPSinsight team of Janine, myself and Kim Strom set out with a forecast full of suns. Two years ago we met Kim at the Dynafit Speed Transalp and discovered we had everything in common. She had experience as a photographer and writer, and was literally bursting with enthusiasm to run. It turned out that our trail running and ski mountaineering photography had been motivating her to explore the Alps since moving to Europe from the US. Then suddenly, she was running with us.

Shortly after that project she joined our team and, ironically, began fueling our motivation to hone in on trail running as a focus of our work. Two years later, we’ve produced the guidebook to trail running in the Alps, created Elevation : The Alps Trail & Peak Running Resource and now as a team, decided to establish what we feel could be the Alps’ best multi-day trail running tour.

It turns out that our tagline, which is also our mission, Inspiring Mountain Experiences, functions as a loop.

Next summer, we’d love nothing more than to run into some people in Zermatt fresh off the Via Valais. We’d very much like to tap into their energy from what they experienced.

And about that Via Valais…. Stay tuned for all the info this winter. If it ever stops being summer, we’ll put our heads down and put the route, maps, logistics, stories and photos on Elevation.

*It’s here now…all the info about the Via Valais!