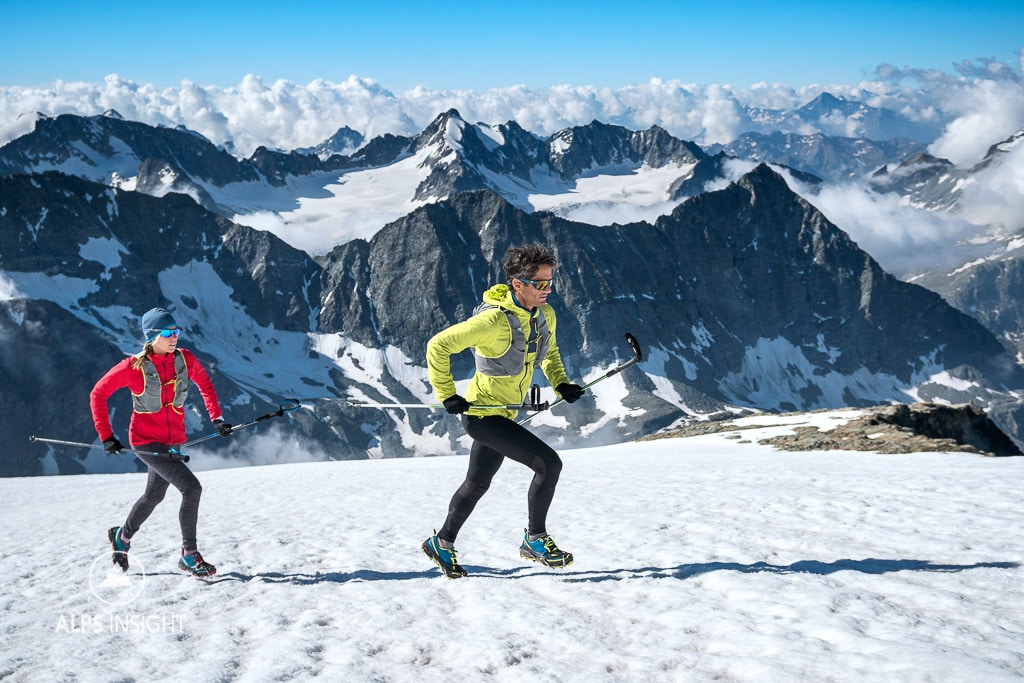 Throughout the last ten years, I have tried a lot of different crampons for trail running. Many work, but not many work exactly how I’d like them to work. The Edelrid Beast Lite has been a favorite with its steel front points, but while aggressive and well-fitting, overall it’s both a bit too much (front points) and also not enough (shallow aluminum points). The Petzl Leopard FL works great, but doesn’t work great on narrow profile running shoes which don’t sit well in the front bail. The reason is clear – these crampons aren’t really made for trail running shoes, they’re made for climbing approach shoes as a minimum.

Then this spring, I was reminded of the brand we used when we lived in the US – Kahtoola. I had used their aluminum crampons, made for trail running shoes, for many years when we were trail and peak running in the Sierra. They always worked well and actually fit perfectly on soft trail shoes. I gave them a ring and a week later had a couple pairs of their new KTS Crampons along with some MICROspikes.

The first thing I realized was that the KTS crampons were now steel, and not aluminum, as they had been when I last used them (dating myself…?), but at the same time I appreciated this. While a bit heavier, steel takes a beating far better than aluminum. Other than the material, the design seems mostly the same as the one I knew to work so well. Their leaf spring system is what allows the crampon to fit a soft shoe, and combined with an absolutely bomber strap system, you have a crampon that is not going anywhere. The Kahtoola KTS does not have front points, but really… how often do you truly need to front point in running shoes?

The KTS Crampon is ideal for days when you aren’t exactly sure how steep or icy of a snow slope you are going to find yourself on. They buy you some insurance. The points are what I would consider medium depth, meaning they aren’t so shallow as to just scrape along, but neither are they deep and aggressive. They are a happy medium, which seems to be precisely what I want on my trail shoes when I get on a steep, hard pack slope.

The ideal use for the KTS Crampon was on the Alps’ Balmhorn, a peak we ran in the spring and one I knew to have a big, open glacier to climb. While not steep, a fall could be bad, and early morning temps would have the snow rock hard. The angle was just enough to warrant something more aggressive than MICROspikes, the KTS Crampon was ideal.

What really caught my eye in that Kahtoola box were the MICROspikes. The crampons are great, and are indispensable when needed. But the MICROspikes seemed to be a piece of gear I’d need more often, especially when I balled them up in my hand and realized just how compact and light (338 grams) they are. The spikes may be smaller than a crampon point, but they are sharp, aggressive and made of stainless steel. How many times have I wished I had these…?

The MICROspikes went straight to work on La Ruinette, one of our Way Ups, which we weren’t sure if we needed traction for a low angle glacier or not. The MICROspikes were the perfect solution, minimal weight, and likely just the ticket to get us to a rock ridge. Sure enough, we needed them. And the biggest bonus of all? They literally go on your shoes in seconds thanks to a rubber harness that only needs a tug to slip over the shoe. Secure and simple so you won’t hesitate to put them on.

Traction isn’t only for security on snow or ice, sometimes it just helps make you move with much greater ease. Less slipping, less fighting your feet as they get away from you – just move. MICROspikes make a big difference to keep your momentum.

In summary, Kahtoola has done a great job meeting the demands of trail runners for both icy trails and somewhat sketchy slopes (MICROspikes), as well as for those pushing into steeper terrain that warrants something more secure and reliable (KTS Crampons).