We’ve traveled the world for many of our 17 years as pro photographers.

Looking back, what stands out amongst all the memories we’ve managed to log are the acts of kindness offered to strangers wandering other countries. And not just strangers, foreigners. People who think differently, act unusual, and maybe have little sense of local traditions. In this case, us. With cameras.

To kick things off for the New Year, I’d like to share some fun highlights from many years. 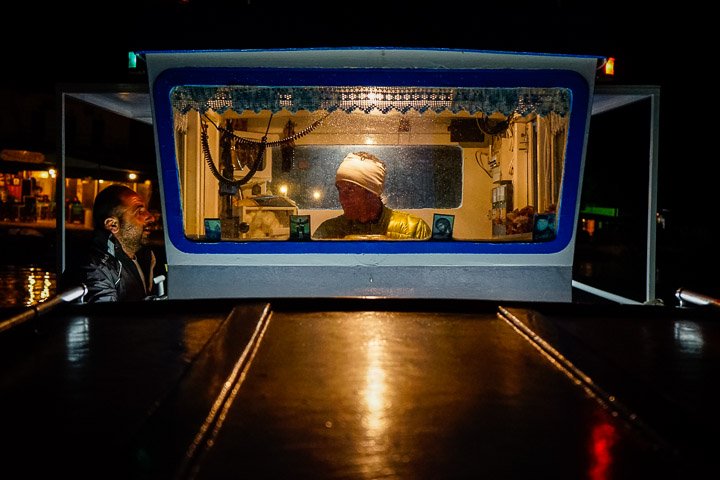 Greece may well be the friendliest country of them all. There are far, far too many memorable acts of generosity, or just plain loopy fun, that we’ve been a part of. As a result, Greece is certainly one of my very favorite places. Above, is me getting caught by the Telendos ferry driver for trying to drive the boat when he disappeared. I thought it would be fun to take command of the wheelhouse. Incredibly, our friend Toni captured the whole process, which he phrased as a kind of “Love story”. 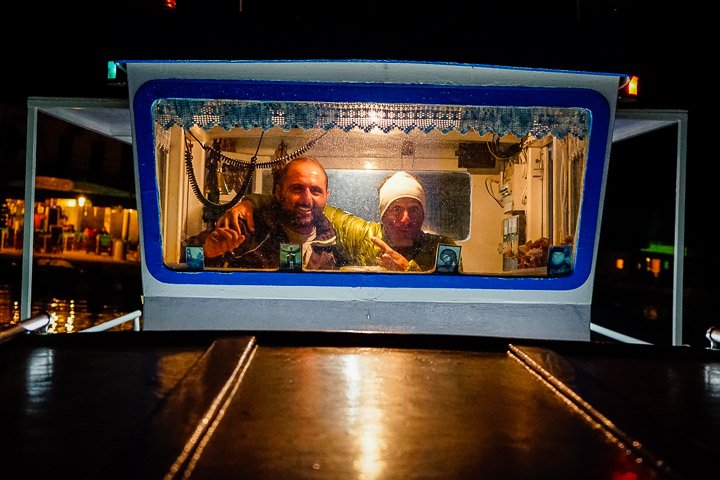 When I got caught, I prepared myself for a good scolding, or at least the Swiss finger of shame wagged at me. But no… this is Greece. 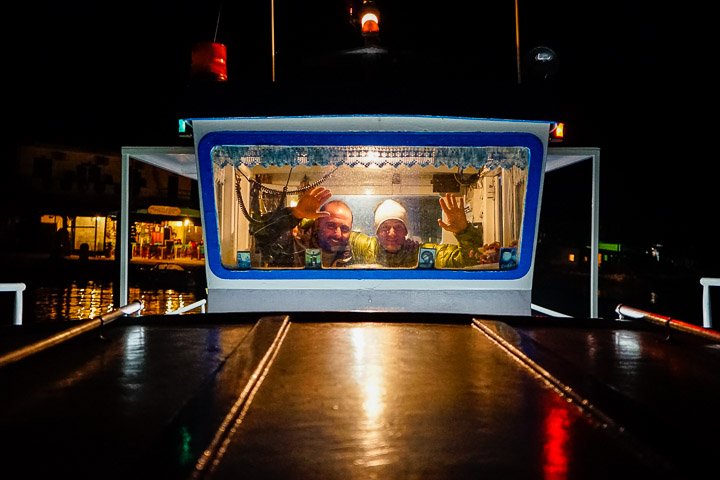 The captain joined me in the wheelhouse for a brotherly hug and good laugh. I wasn’t busted, I was his new friend. 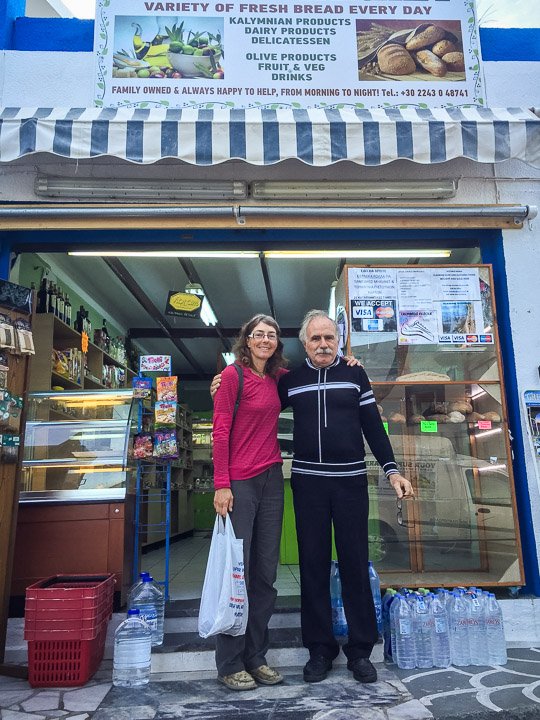 Janine and I spend each November in Kalymnos, Greece. As a result of my enthusiastic waving to every Main Street business owner I’ve come to know over the years, I’ve been nicknamed the “Mayor”. When we arrived to Masouri last fall, we were gifted with wine bottles and various fruits, jams and cheeses as we made our first stroll through town. We finally confessed to our favorite shop owner that that very day was our wedding anniversary, suddenly a champagne bottle appeared to go with our wine collection. 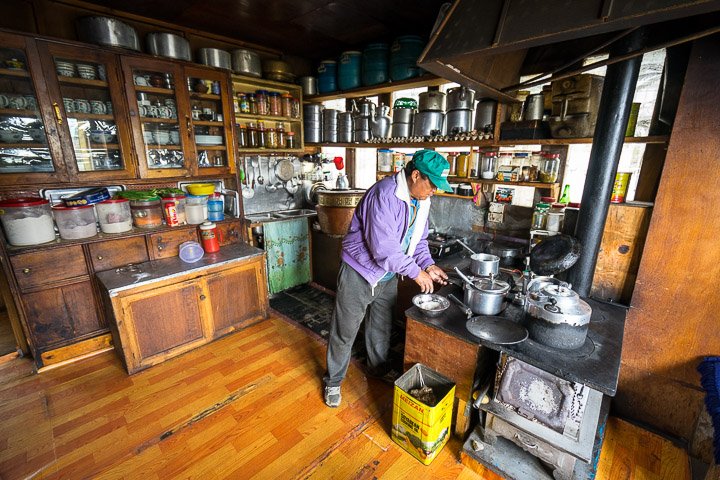 Janine and I were walking through the village of Kunde, just above Namche Bazar in Nepal when we came across a guy sorting some sort of plant in his fields. We stopped to ask what the plant was for, had a quick chat, and were then asked where we came from. “Switzerland”. “Really, I use to work at the Fründenhütte”. Come on… it’s very close to where we live in the Alps, and we had just been there weeks before. Suddenly we were in Dawa Sherpa’s home, sitting in the kitchen, watching him prepare a huge meal for us, and chatting about the Swiss Alps. 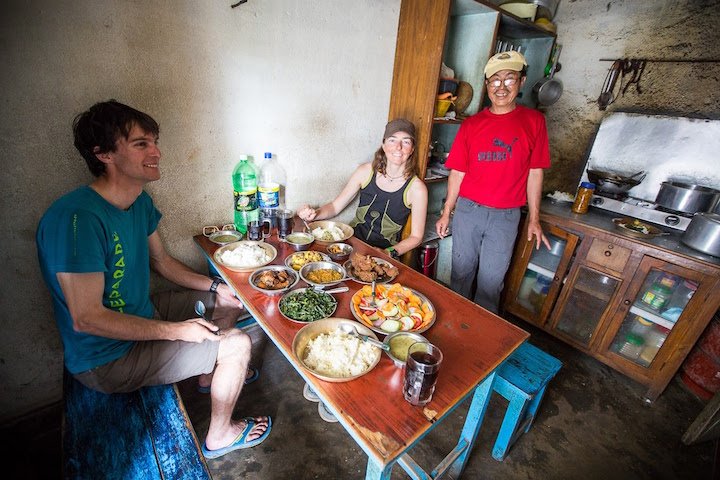 This is our great, great friend Harka Dhan Rai, a man who has been with us for almost every minute of our time in Nepal. We love him like family, which is also how it feels to be with him. Nepal is known for the Himalaya, but the people, and the friends you can make there, are what make it far more than mountain views. In 2015, Harka was set to join us in the Khumbu Valley, but due to weather found himself delayed and was two to three days behind us. Meanwhile Janine and I were already in Namche Bazar, waiting. Finally, we had to leave, and told Harka where we could meet some time later. But the next morning, he suddenly appeared, walking funny. Turned out he’d walked nonstop, and then hired a horse to catch us. The horse was to blame for his sudden bow leggedness. Finally, like every trip – it ends with a huge, and very specially prepared Dal Bhat at his home.

The list of stories could on and on; Italy, France, Cambodia, and so on. But our home country of Switzerland was host to one of my favorites. On one of my first visits to Switzerland, in the summer of 2000, I left to go for an early evening run from where we were staying at Janine’s parents. “Be home by 6:30, DO NOT BE LATE, dinner is at 7 sharp (this is Switzerland)”, Janine warned. I knew she was nervous, I was her newish American boyfriend, and Americans are known for being late – late is not tolerated in Switzerland, and I was still in point scoring mode.

As I was running through the forest I passed a small farmhouse where a couple sitting outside yelled something at me. “Sorry, I don’t speak Swiss.”. “Where are you from?” Twenty minutes later I was sporting a solid wine buzz and getting a tour of their place. Together with my new friends, we sat and chatted about California, and marveled at how good the local white is. Then I looked at my watch. Late. Not just late, also kind of drunk, and not entirely sure how to find my way back on the intricate web of Swiss trails.

Sixteen years later we’re still married, I’m great friends with Janine’s parents, we live in Switzerland – and I know better. But of course I’d do it again.

The point of all this? The word foreigner is a dangerous word. After all these years I’ve seen the truth, people are people, and kindness goes a long way, in fact, it’s everything. Kindness has been offered to me when I am an outsider, I sincerely hope I can do as good a job when it’s my turn to make the offer.