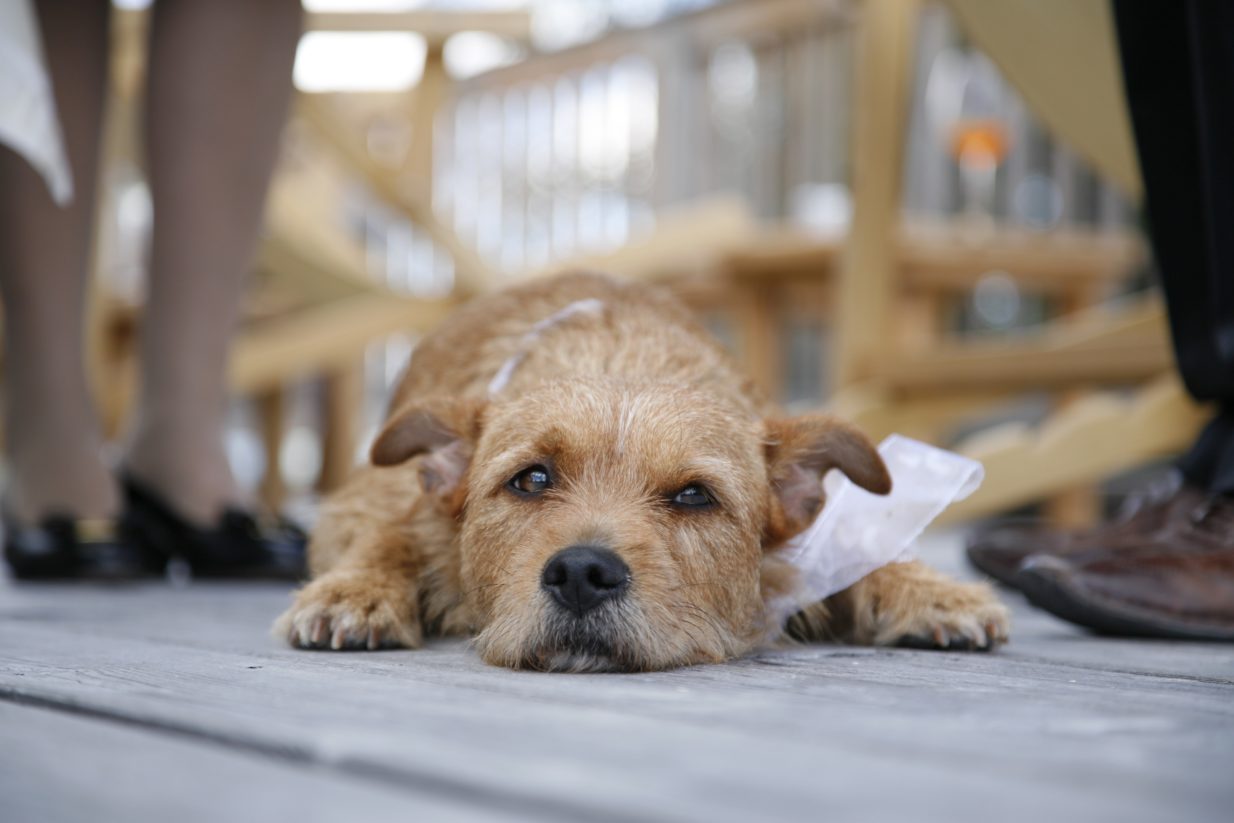 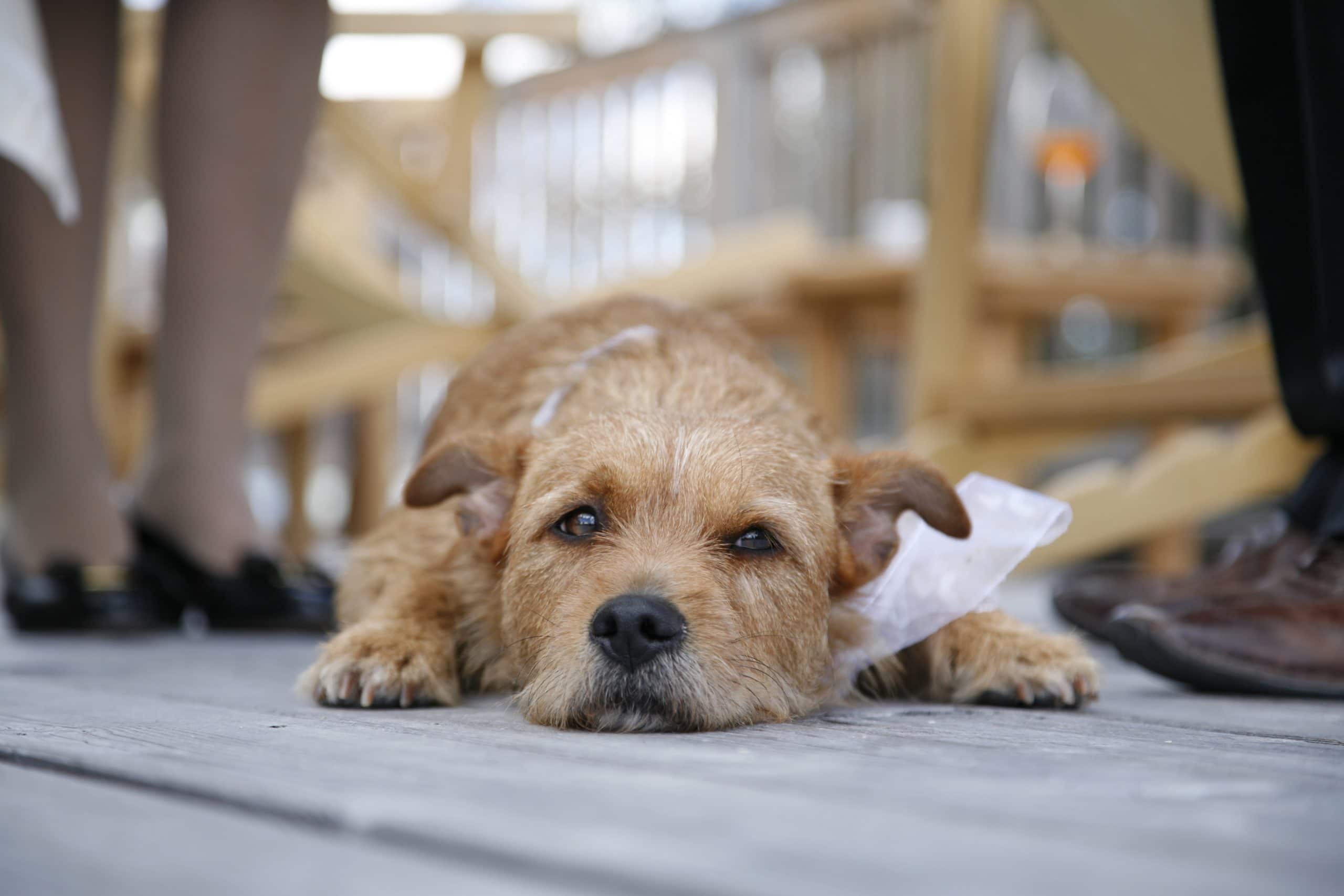 The barking wouldn’t stop, it only grew in intensity, ranging from urgent to frantic. I decided to go investigate.

Toni and Marianna, our friends and neighbors, have this little dog, Bulma. Because we occasionally take Bulma for a run during the day, we have a key to their house.

I went over, unlocked the door and before I could even get the door ajar her snout was in the crack pushing so hard that my opening the door made her slide backwards. I didn’t know what she needed, but she needed something.

As I walked into the house to get the leash, she rushed past me, desperate to get outside. We live in a European apartment, so outside your door is not quite outside.

As she spun in circles yipping I realized I needed to find that leash, and fast.

No luck, and a quick phone call to Marianna to ask, “Dov’e il guinzaglio?” yielded no answer.

A minute later we were descending the stairs, Bulma looking her best with a prussik cord wound around her neck.

Once on the street, Bulma charged for all she was worth towards the nearest dirt. But wait, an enormous black dog blocked the way and did not hesitate to tear into her. Fighting her like a swordfish I managed to break the two of them loose and we continued on, when, not 10 feet further, and directly in front of our small neighborhood market, Bulma began to resemble a soft serve ice cream machine that would not turn off.

Mortified, I could only stare at the sheer quantity that was coming out of this small mammal.

The thought of running for it crossed my mind, but everyone knows me, as I’m the only American for 50 kilometers.

Bulma’s choice of location caught the attention of the owner of the cafe across the street and she yelled across in the local dialect, “You better clean that mess up!”

Or maybe it was, “You idiot, what the hell is that dog doing on the cobblestones!!!”

This is where not being fluent in any of the local languages puts me in a very awkward position. I can order food, go to the store, get directions, have a basic conversation, but I cannot explain to the store owner that I need some paper towels, a trash bag and a sink to wash up in as this dog that doesn’t belong to me and is choking on a prussik cord just shit magnificently in front of your store.

But I gave it my best.

Translated, what came out was something like, “But yes, good day, my dog who comes from the house next to mine has cacca’d, quite a lot, outside on the stone street. Do you have something I can clean? I hope for a tissue.” I don’t know the word for paper towel, so opted for a salvietta (basically a tissue) when what I really needed was a high pressure hose.

She looked at me trying to figure out just where I came from, then out to Bulma with her neon yellow noose, then at the massive, and spreading puddle blocking the entrance to her store.

The situation made more sense than whatever it was I had just said so she disappeared into the back and returned with an enormous wad of useful items. She handed them to me and made it clear that this is where her part in my story was finished.

Back outside I knew the inevitable would occur, and it did, people arrived and paused just long enough to make it known that what I was doing was something they were extremely pleased to have nothing to do with. Cleaning up this sort of thing on cobblestones is not easy.

Finally finished, the now weighty garbage bag in one hand and Bulma’s leash in the other, we strolled off to find a bidone to dump our spazzatura.

The cafe owner, having been entertained for the last few minutes yelled across the street, “Puzza?” Of course it stinks, “Ma, si, puzza, pero è pulito”.

Proudly, I walked back to the apartment feeling one step closer to learning my new language. Another incident handled without a dictionary.