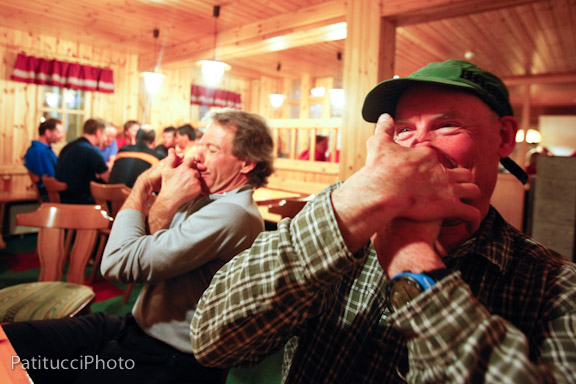 Lou Dawson is a legend in the American ski culture. Primarily known as the first person to ski all 54 of Colorado’s 14,000 foot peaks, he is also a pioneer of backcountry skiing, a leader who brought about awareness of ski touring ideas to the US and the daily manager and writer for the tremendously popular WildSnow.com.

We were lucky enough to run into Lou and his great, longtime friend Ted Karasote while we were all on Austria’s Silvretta Tour. Together we enjoyed dinner in the huts and had some time to chat about Euro ski touring vs. the American scene. I asked Lou some questions regarding his thoughts after years of visits to Europe. 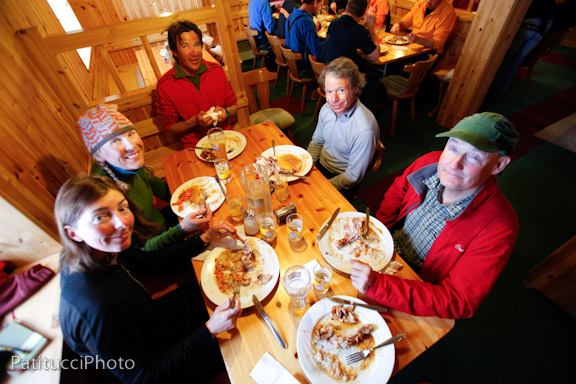 Lou (in green hat) enjoys a meal in the Wiesbadener Hut, Silvretta Tour

Lou, what is the first word that comes to mind when you think of Euro ski touring?

Would huts like those found throughout Europe make it in the US?

What is your ideal day skiing in Europe?

I have had these days where I have skied lower level stuff, not the big mountains or big tours, but smaller stuff which we have run laps on situated above small villages. At the end of the day we dropped back to the valley and stayed in small, local guesthouses where we have all these great experiences with people who belong to the mountain culture here. It is a wonderful way to experience the mountains of Europe.

Lou, you are 58, in the hut there are numerous others of the same age or even much older. In the US, it is not too common to see “older” skiers putting in 2000+ meter days day in and day out. Here it is completely normal. What do you think fosters this? Will America get to this point in it’s mountain sport culture?

We must have our eyes open to the possibilities in the US. Younger people are much more active and the older ones slow way down. In Europe there is a huge range of people involved with alpinism, in Europe it is no big deal, it’s just what you do. For Europeans, mountain sports are just part of the lifestyle, in America it is a “sport”. Americans are more concerned with “speed” and how much “vert”, this comes from our media. In Europe you would have to be like Messner to get noticed. It is the experience vs. the accomplishment idea. Europeans are more about the mountain experience. There are older role models in the European mountain culture, this has not yet come to the American scene with such a great base.

What is the next ski tour you want to do in Europe?

It’s time I do the Haute Route. I am especially interested in the historical component.

For me it was a great pleasure to meet up with Lou and Ted and spend time laughing about the decadence of the European ski touring scene. His site WildSnow.com is a fantastic source of information for backcountry skiers and now has a full report of the Silvretta Tour for those interested in visiting Austria. Become a regular visitor and encourage Lou to visit the Haute Route for yet another trip report.

Why Hire a Guide?
How to Choose the Right Alps' Grand Ski Tour
The Berner Haute Route Ski Tour