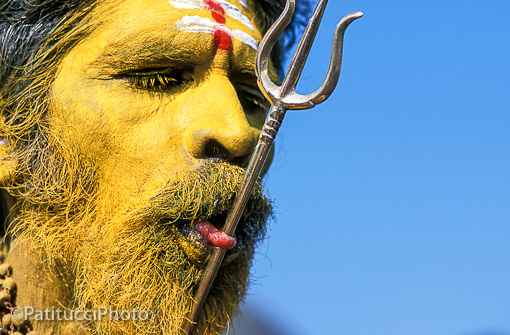 After our last post, Nepal Photography, we had a number of people comment and message us asking how we feel about getting so close to people to make travel photos. 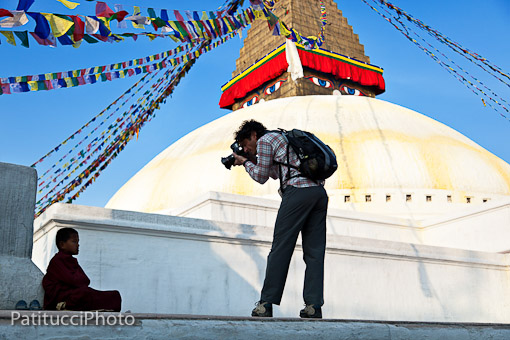 In that post, the lead image is a Buddhist child, he is filthy, his arms are tucked away inside his robe and he is sitting asking for alms. Clearly, the photo was made at close range and is proven in an image of me making the exact photo (right).

Typically when you look at other’s travel photos, all the images of people are in groups, clearly made from a distance or simply made in passing. But when you see images by a professional travel documentary shooter things change. Suddenly there is a closeness, an emotional connection, and even a relationship with the photographer. Great, iconic images typically have one thing in common – emotion. Additionally, they are often tragic, ironic, revealing a cultural difference or something sublime.

How to get these images is as much about human skills as it is about being a photographer who knows how to frame an image. 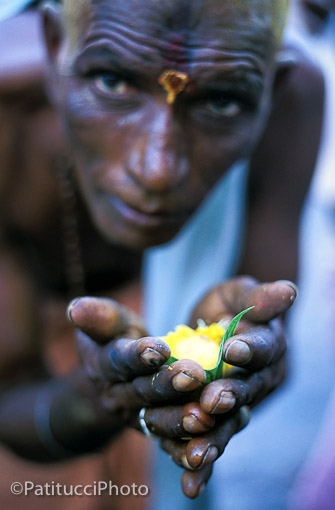 Kindness offered for a gentle approach

For me, this is what I truly love and am most passionate about. Seeking these situations, finding the people, connecting with them and getting the image is the single greatest thing about being a photographer. Our mountain sport work is often conceptualized, set up, recreated, produced and a thousand frames made. But these found moments with very real subjects are vastly more rewarding, and… you might get a frame off, or you might not.

While recently walking the village streets of Lukla, Nepal, I turned a corner and ran right into a little girl, maybe 6. She was rushing out from her home carrying a large bowl of water with a massive, proud smile on her face. In the bowl of sudsy water was a soaking wet dog, its sad eyes peering up. The little dog was actually so sudsed up that it took me a second to figure out that it was a stuffed animal. The little girl was giving her pride and joy a bath. My camera was around my neck, it would be so easy. But first I needed that connection, I needed for her to see what I wanted to do. I smiled, gestured to my camera and made it clear I was asking to photograph her.

In this case, it was immediately apparent that it was not okay. She put the bowl down next to the water fountain and ran back across to the safety of her doorway from which she shyly peered out, monitoring my next move. “Can I take a picture of you and your dog?” Shake shake. “Please… I’ll show you the picture.” Shake shake.

I accepted my fate, no dice. Smiling, I waved and turned away. As I walked off I still had the vision in my head, it would have made a great photo. Not having that image does not make me a lesser photographer, it makes me a better human being. 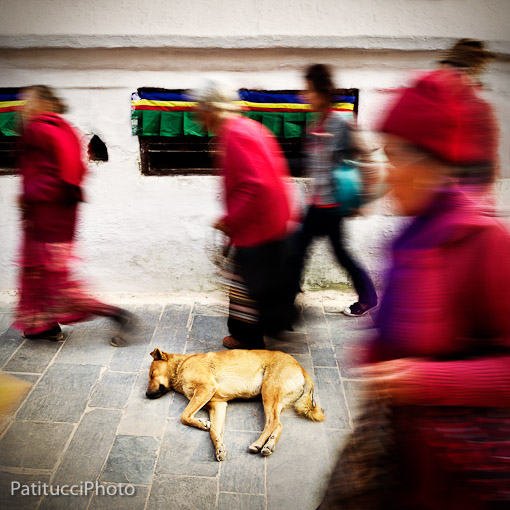 Surrounded in a massive crowd of praying, walking Buddhists, I stood completely still with my eye to the viewfinder for about 20 minutes to get just the right people framing the sleeping dog

A few nights later we were back in Kathmandu where I witnessed the all too common opposite tactic for image making. There, at the Boudhanath Stupa, Janine and I went looking for photos, which sometimes involves seeing the potential for an image, then waiting. While doing this, and having my scenario begin to play out, I had numerous encounters with the uglier photographers. You know the ones, the bulging camera vest, draped in lenses, filters, and monopod. As I stood watching and waiting, they moved in for the kill. Seemingly on 13 cups of coffee, their spastic behavior and clumsy movements shattered any peaceful connections with what they were trying to photograph. One after the other, they ruined my experiences. I say experience because I am after something more than the image. 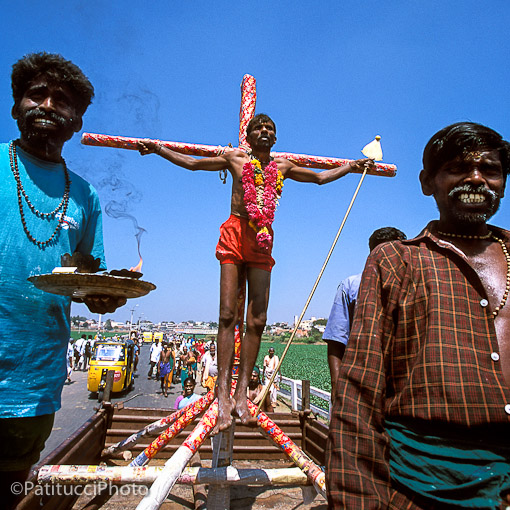 Always check in with the locals before shooting a crucifixion. Luckily these two were all too proud to show off their friend.

When I came upon the young Buddhist boy asking for Alms I stood nearby for some time before asking to make an image. I smiled, nodded and got a feel for his acceptance of me. He knew what I was up to. I asked with my body language if I could make a photo, the answer was yes. With pre-adjusted focus and exposure, I made the image very quickly, I didn’t want to leave a bad impression, and yes, I dropped some money in his lap.

There is more to making this type of image than using your camera. The ugly photographers, jostling for position, elbowing others out of the way and rudely shoving a lens in someones face have it all wrong, as much for themselves as anyone. Seeing an image but missing it is okay. I’d love to have that shot of the little girl, and hundreds others like it, but they weren’t to be. The memory is even more valuable, so much so that sometimes I put the camera away just to witness something. 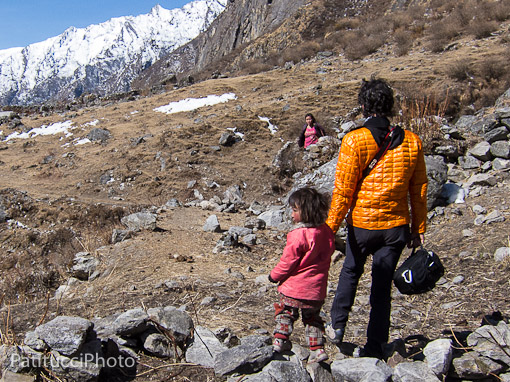 Walking away from shooting a monastery. Opting to go for a walk, hand in hand, with our four year old Tibetan Guide. I’ll never forget that day.

One of my photography heroes is the great journalist, James Nachtwey. In the movie about him, War Photographer, he says some things I have made my mantra:

If you aren’t happy with your image, move closer. Move slowly. Move with respect to the surroundings. Make a connection with people.

And I have my own rule; If I feel guilty about making an image, I’m probably doing something wrong.

These are basic human skills. You’re making images of people, not landscapes. Show some respect and be willing to walk away with a memory, not a photo. 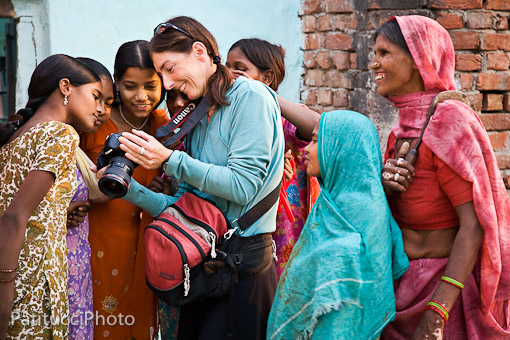 Janine exemplifying what it’s all about while traveling 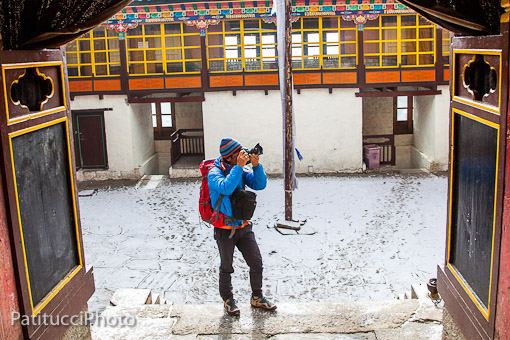 A word on gear: If your camera isn’t accessible, it’s likely you won’t get any shot off. Have it ready. While on the go, we use LowePro’s frontloaders for quick access to the camera and film cards.