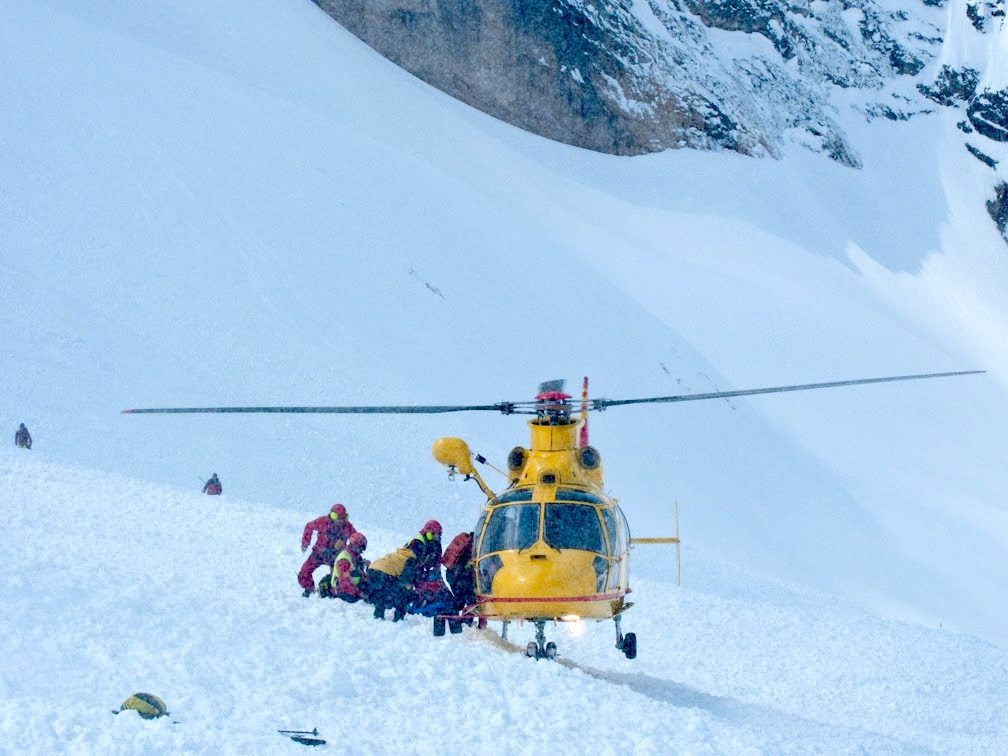 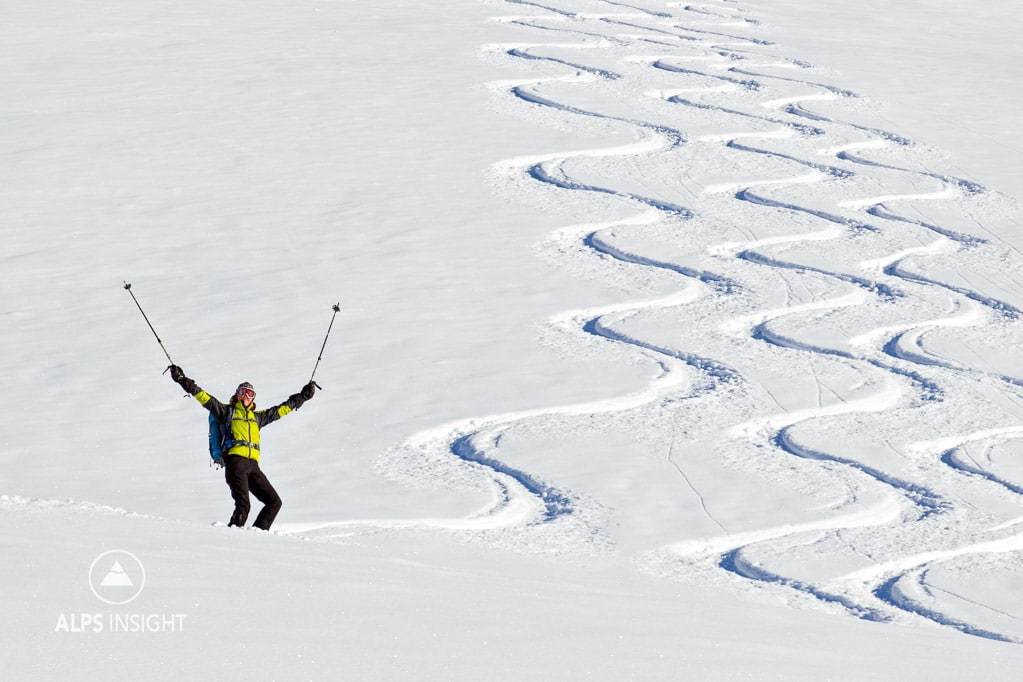 I write this on the eve of a nightmare experience to process what’s in my head. It’s a difficult decision to share what I have to share, but, I truly believe it’s important, critical even, that this sort of story be told. It’s something every backcountry skier hopes never happens.

The great war photographer, James Nachtwey, once said that the reason he makes such horrific photos is because he hopes it will make a difference for someone, someday. Perhaps what he shares can prevent some tragedy. This is also my desire.

The day started perfectly, May 1, and nearly a meter of winter powder. We arrived to the Marmolada (the Dolomites highest peak) and found literally a hundred or more skiers already skinning up to the east summit. Our goal was the true highpoint, the Punta Penia, but it was glaringly obvious that it was too dangerous. Small slabs were breaking free even on some of the lower angled terrain around the Punta Penia. We opted for the lower angle, more rolling slopes below the east summit instead.

We skinned to the top under blue skies, had a snack on top, chatted with a mountain guide friend about the conditions, and then skied down in ideal snow.

Everyone noticed that several groups were attempting to climb the Punta Penia, and it was widely agreed that this didn’t seem to be the best idea today.

Skiers on Punta Penia had skinned to some steep rocks and from there began to climb steep snow to a ridge above. We watched all this from our own slope which ran down to the same opening below what the Punta Penia skiers were climbing.

After skiing down to this opening, we regrouped and decided another lap was in order, at least to the best section of snow. Once we were skinning again we stayed well to the side of the exit of the massive canyon that the Punta Penia climbers were in. Looking back, I don’t know if we did this consciously to stay clear, or just because we were going back to the slopes we had come down. 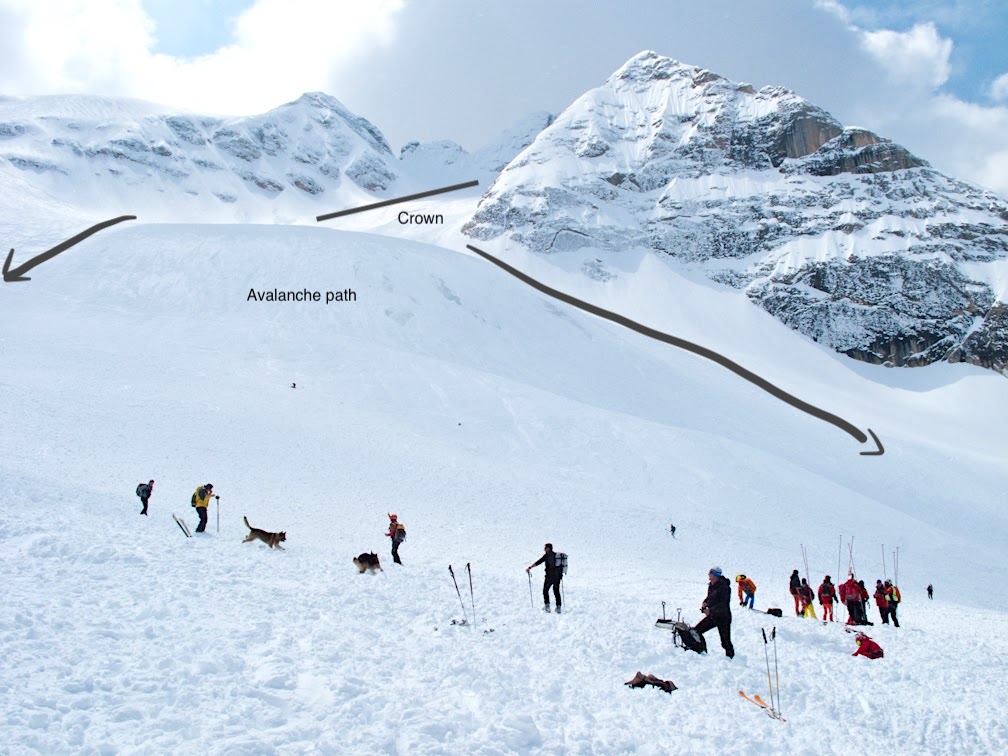 I remember our friend Andreas making some sort of surprised sound a moment before we all heard the whumpf and looked up. The avalanche seemed to release at the climber’s ski depot. What started as just movement to our eyes, grew to an enormous, astounding, wave of snow, slabs and exploding debris. It came towards us like a wall of water released by a broken dam.

My memory is of trying to follow the many falling bodies I could see in the top sections. Avalanche course training tells you to watch them, but then Andreas yelled out, “MOVE, GO, let’s get out of here!” We all quickly spun around, pointed our tips downward, and traversed out of the way. The avalanche, at full bore, passed about 100 meters from us blasting us with its wind and white smoke.

As quickly as it started, it was over. Reality set in as we looked on at the scene. Where there had been numerous skiers, we saw no one. It was strangely silent, the sun still shined happily warm and bright. We were the closest skiers to it and needed to act.

But how? Where to start? This thing was not just some small slab cutting loose, it didn’t have one or two people in it, it had maybe a dozen or more and covered an area perhaps a kilometer long and several hundred meters wide. What lay before us was overwhelming.

Call for the helicopters! What if something else goes above us? Fuck, we see no one. Oh Fuck, no. 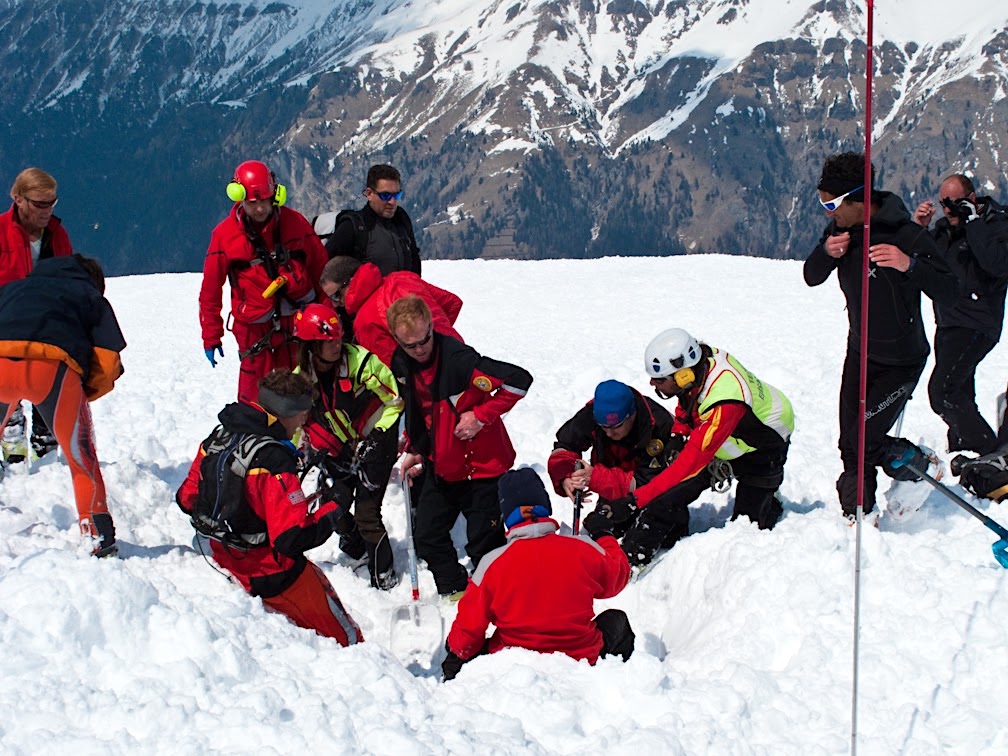 Andreas called the emergency phone number. I headed into the debris field while lower, Janine, Dave and others traversed in as well. Andreas followed behind me and soon we were faced with a lone figure, a young guy, just standing in the debris. We approached him.

Now, many other skiers were arriving to help. Chaos took over. The area to search was massive. Where to start, what to do? Arriving help still had their beacons on transmit throwing off the searches, and were yelling and screaming in frustration and fear.

The surface of the snow was a sea of clean white balls, frighteningly dense to ski or walk on. It was setting up like concrete. As some groups organized to methodically search, others roamed. Time was going by.

Finally the helicopters arrived and with them the search parties with dogs. Word was out that two snowshoers had been seen in the path and no one had seen them since. Janine vividly remembered seeing them above us and moving into the canyon. Besides them, no one knew how many people were missing. No one was finding anything with beacon searches. Dogs were at work, barking.

I found myself assisting a woman dog handler, one eye on my beacon, the other on the dog, hoping. Finally the dog began digging frantically, I had a probe in hand, the woman called for it, made one stab and screamed she had a find. She reached down, pulled away some snow, and right at our feet not 30cm below the surface of the snow, a frozen, clawed hand. We began to dig. The hand became an arm. The arm a torso. Other rescuers were there now, too. 35 frantic minutes had passed. I stepped back and watched. His face was freed, expressionless, peaceful. On his feet were snowshoes.

He was out, they worked on him while other searches continued. 50 more minutes passed. Nothing. Hope was giving away to hopelessness. Then another dog reacted, ironically right in front of us, and not 2 meters from the first find. Again the probe and the screams of a discovery. Minutes later the second snowshoer was out, 90 minutes with no oxygen. Like his friend, he was not wearing a beacon. 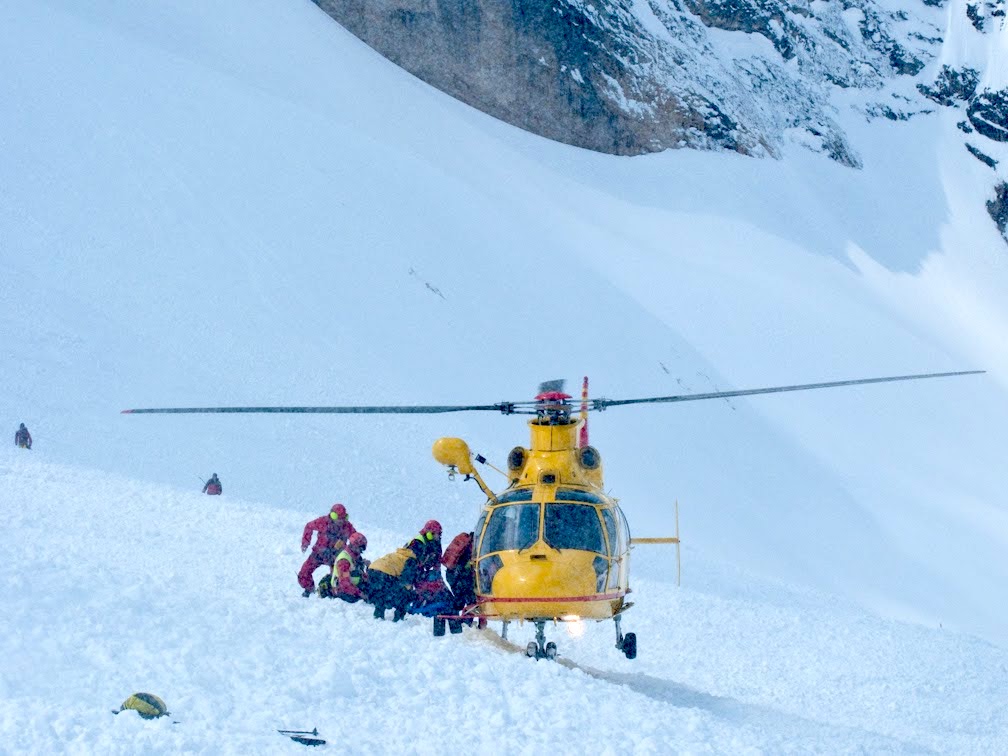 By now a half dozen helicopters were on the scene, each with new dogs and new personnel. A lone skier came through the scene, we all saw him, he had on one ski, carried two sets of ski poles, and was sobbing.

Our group gathered, we could do nothing more to help. The searchers wanted everyone to leave the area so the dogs could work. The rescue effort was turning to recovery.

The thoughts that go through one’s head after an experience like this are difficult to come to terms with. We sit here tonight, numb. For me, writing about it helps, and I understand that everyone did what they could. But to see it and wonder what is happening now to these people while we are safe at home… this is something else we have to process. Even still we do not know the outcome.

How can a place and an experience be so wonderful one moment, and a living hell the next? How can this playground we love become so deadly? We’ve never lost sight of the fact that it is a dangerous game, but to see the reality is something else. A frozen hand grasping for the surface will remain with me forever when I ski.

Fellow backcountry skiers will understand all of this. We continually hear stories, see videos, etc.. But at this same time last night, it had not happened to either myself or Janine. We won’t stop skiing in the mountains, but we’ll surely learn from this experience and use it to help us make the best decisions. I hope it does the same for others.