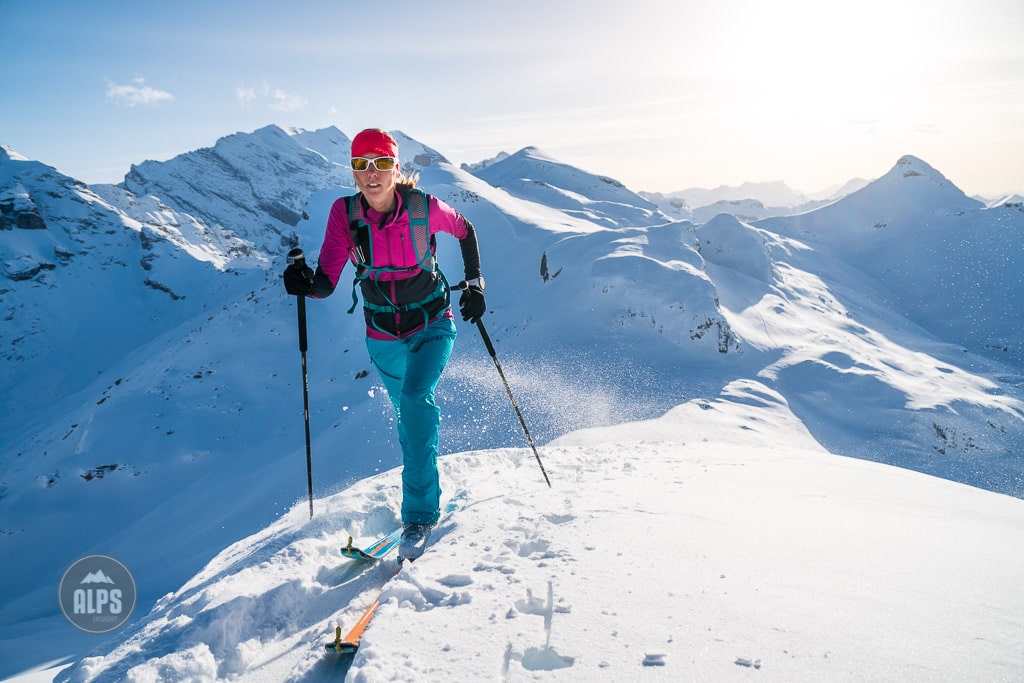 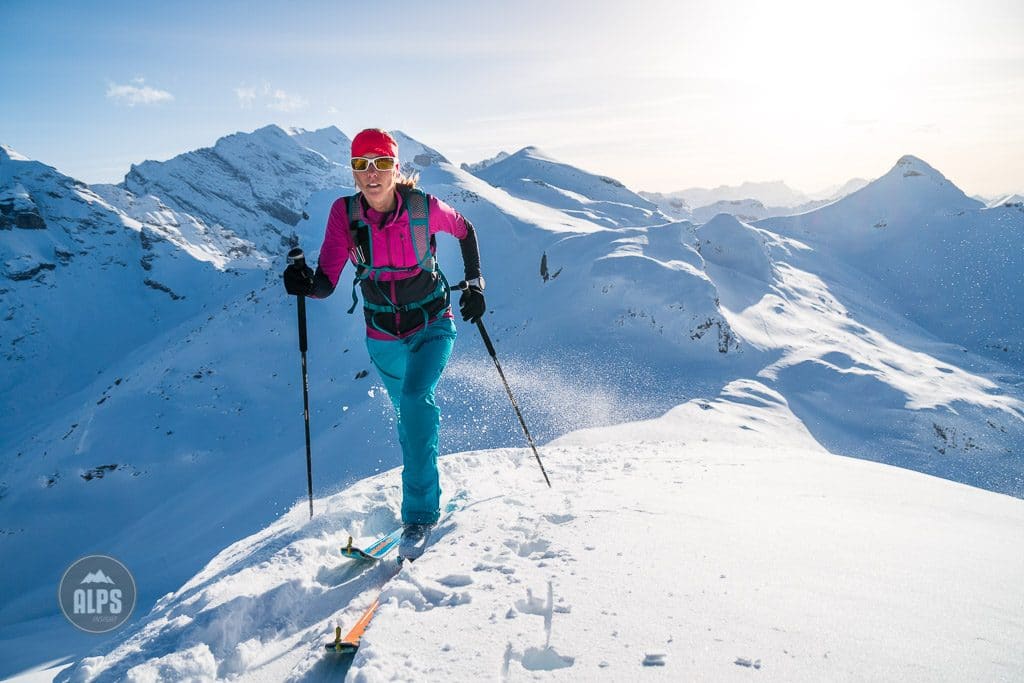 The author, Kim Strom, enjoying no lifts, no lines, and paying for no tickets. But actually still looking pretty cool.

I’m cautious to admit that I don’t love to downhill ski. I don’t though. I’m from the flat plains of middle America where skiing doesn’t fit the topography or the culture. And so, I didn’t grow up a skier.

I moved to France with no mountain experience. I didn’t speak the language, couldn’t admire the local cuisine (being vegan), and I certainly didn’t ski. Along with playing pétanque and smoking, skiing seemed to be a prerequisite for French residency.

At Alpine resorts, people of every age glided by with perfect nonchalance, a cigarette dangling by some sticky magic from relaxed upper lips. Hips swiveling beneath unmoving upper poise. I wanted to be a skier too, but first I’d have to make it to the chair lift. It seemed an innate skill itself to funnel from the edges to the front, without thought of a line. As an adult, waddling on long, waxed sticks to what felt like the edge of a cliff, I dragged my poles along the ground, hoping they would be breaks for my imminent fall. I couldn’t ski and I couldn’t even eat the melted cheesy delights at the bustling, but unburied lunch chalets. No tartiflette or raclette for me. But I was living near the French Alps now, so I would learn to ski.

The thought of white-knuckling down a groomed piste with hundreds of other puffy-coated and shiny-goggeld downhillers terrified me. Maybe it’s the potential for speed or the unpredictability of fearless kids bombing down with seeming effortlessness and absolute confidence. Maybe the scraping sound of snowboards approaching from up-slope or my own lack of elegant technique alongside white-haired men in snowflake sweaters floating over moguls. Maybe all of the above. But I just didn’t connect to the downhill hype.

Learning alpine skiing over the next several winters, I missed the journey, the delayed gratification, the effort demanded by uphill mountain sports. Uphill is a foreign idea to a flat-lander as well, but I prefer to go where I can by my own power. I’m stubborn and I like to sweat, so carrying myself uphill on a quiet forest trail seemed a better fit. Skimo lets me spend more time making my way up than speeding back down. No lifts. No lines. No tickets. No need to be cool.

I started skimo from a desire to be in the mountains all year, returning to some of the same trails and summits I love to run so I can know them in each season. Skimo provides a quick meter-fix when the snow line limits my elevation gain on foot. It’s the perfect complement to mountain running, if I need another excuse to spend hours outside in winter generating my own heat the colder months. I want to hear my breathing and the swooshing of skins shuffling over snow. I want to feel the rhythm of full body movement extending through poles and skis that aren’t much extra to haul along.

I clip into nearly weightless gear in the low valley fog. Another grey day. Start out slowly, I reason and begin stomping upward, as trees are swallowed into the clouds below and to the sides. Today, I climb shadowless, leaving only track marks that will be blown over, filled in, and finally melt away in the spring thaw. A temporary cord zigging back to the bottom.

Grey brightens to white and the invisible mountains around me are the projections  of other summits, other slopes, and themselves on other days. Soon I am panting, pushing, remembering the taste of blood and a pounding heart.

I catch two older Frenchmen, tracking sharp Zs up a steep forest slope. They teach me to kick-turn around thick trees. As I learn to shift my weight and flick my heel, we travel upwards together for a while before sharing swigs of genepi from their pack flasks.

Woosh, woosh, woosh. I feel the familiarity of stocking-feet trudging across the hallway carpet to pass an electric shock to my mom as she washes dishes in the kitchen sink. We both chirp and I shuffle away.

A cuckoo calls. No one whizzes by.

Today I glide over matted snow. Gathering current until I break into blue sky. Grounded and gasping at the summit. Recharged.

It’s beautiful up here. Cold air, warm sun, and everything else left waiting back down at the bottom. Standing at the top, I’m not ready to come back down. Not yet. I absorb more energy from the sun and allow my breathing to calm before whipping the skins from the bottoms of my skis and tuck them into my shirt pouch.

My mom told me she tried to ski one time at one of the iced-over landfill hills touted as a ski station. She threw the heavy rentals ahead of her down the slope and scooted on her backside back to the security of flat ground.

After a short break, I notice my bare fingers and wet back. I layer on a jacket removed during my ascent, and prepare to collect the not-so-graceful curve of all those turns I just earned.

I begin to uncoil a loose ribbon, connecting a few nice turns, gaining confidence and speed. I wobble over some crust, skid, sit back too far and my thighs whine from the strain. My hands drop behind me, and I remember the instructions repeated over and over in early piste lessons, hug your mom. So much form to remember. My ski down isn’t pretty, but it’s getting better, and I even catch myself smiling and whooping as I go.

Back down at the icy parking area, warm boots sigh as I empty them of sweaty woolen feet. Their exhale mixes with the lowest parts of the sky like a puff of smoke or steam from a fondue pot, even a similar smell.

It doesn’t come naturally, but I can wrangle my thin skis beneath me enough to survive the descent. Maybe I’ll grow to be a beautiful skier one day, but for now, I’m happily up-hilling.

Kim is a mountain runner who promises to have no skimo skills, but has learned to love the sport for winter training and another excuse to move in the mountains.