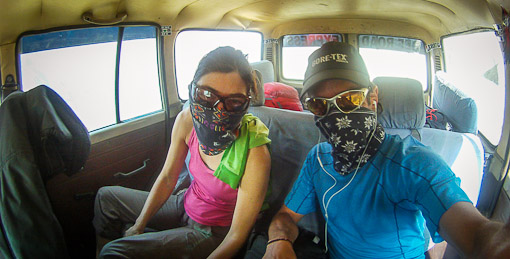 While we edit and prepare all our images from the last month in Nepal, we’ll post short stories written during our travels – quick, fun, journal entries for a few days until we have some images to show.

The 3rd world likes to compensate for any real infrastructure by flexing its bureaucratic muscle. Endless red tape, useless rules & regs, this & that in triplicate, countless permits, and checkpoints enforced by gunmen toting arms from the US Civil War era. Best to keep quiet, let them do their thing and hope it really does end up just providing entertainment value with only minor delays.

Our five hour return to Kathmandu via taxi from the Langtang trek included no less than six military checkpoints. Our car would be surrounded by armed servicemen demanding ID which would then be followed by a lengthy visual inspection. Each time, the officer leaned through the window and compared each of us to our passport photo. Then, with a nod of approval, he’d wave us through. On we’d drive, having never once removed our full dust protection face masks, sunglasses or hats.
Meanwhile, the security flying to and from Lukla was equally as rigorous. There we were subject to, not a X-ray, but a pat down resembling an awkward embrace from a disliked uncle on Thanksgiving. Next up the inquiry, “Do you have any lighters?”, and finally our carryons were inspected with a quick heft and groping of the exterior. Done, pass, enjoy your flight.