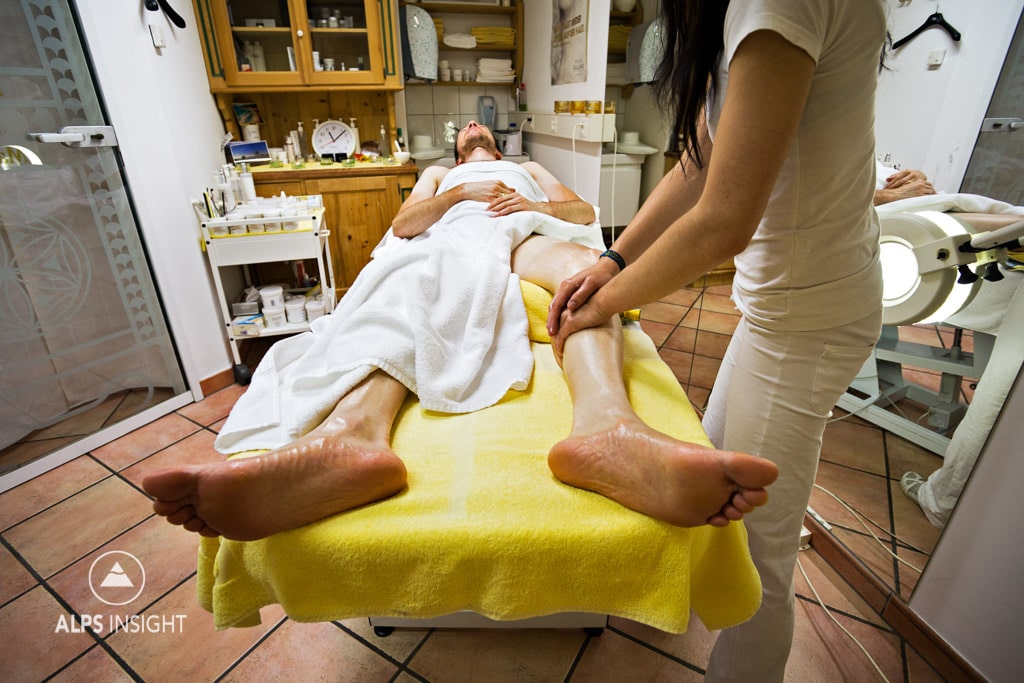 At the climbing gym I managed for several years, we all loved the consistency of how kids confused, “Am I on belay?”, with the easier to remember, “Am I on display?”.

The other day, along with 5 other grown men, we most certainly were.

Our local university has a beautician program which requires the students to get some “hands on” training. Facials, waxing, pedicures, manicures and of course body massage must all be practiced. Rather than have the students work on each other, the teacher has them go real world and finds a local sampling of volunteers for the students. As luck would have it, both Janine and I found ourselves accepted as volunteers for free massage.

My first visit went smoothly enough. I was only mildly caught off guard by the fact that it truly was a classroom scenario where six men are paraded in wearing plush white robes before being directed to their student. Then, promptly dis-robed down to various styles of undies for class time. I was one of these men, while the students are all early 20 something females.

My latest visit had a new twist. We six men were each given a robe, funny little slippers for the five meter walk to the tables, and an odd elastic string with funny paper sacks on each side. At first glance I thought nothing of it.

But once we were all isolated in our changing area, a glass walled room at the front of the classroom, the horror of what we must do struck each of us in its own way. The little papery things were underwear replacements. Something, it seemed, to do with sanitary conditions.

The memory of laughing hysterically at Janine’s own story came to mind, where the women were handed a similar sentence, but theirs came in the form of G-Strings. Janine described how one older women, having no idea of the proper way to install a G-String, had actually put it on backwards. The tragedy of the situation was so extreme that no woman found enough strength to speak up before she wandered off for her free massage with the string in the front.

In our case it was almost worse. We were fortunate to have a front and a back, we just had no idea which was which. One side of the baggy material was larger than the other, but there were clearly differences in design and performance. Picture six men, naked, all holding these absurd little papery diapers out in front of their waists, trying to decide what to do, which way to put them on, and just what the implications may be if you get it wrong. Scratch that, don’t picture this! Better, picture six men in the above configuration behind glass walls in front of a classroom of early 20 something female students pretending to not look in.

We all stood there in silence studying the things, likely with similar thoughts going through our minds. Then, at precisely the same moment we all looked up and commenced with man talk. Nervous comments and tension easing banter filled the room. I stayed mostly silent, not wanting to chime in with my 4th grade level Italian. I knew I was about to look like a fool, but why sound like one as well. Finally, each man made his decision and committed himself to it by stepping through his elastic string. The time had come to parade ourselves into the room. With a roughly 50/50 split of big sack in front vs. small sack in front, we opened the door and meekly walked to each of our tables. It was then I decided to make a joke, someone had to. I’m not sure why it had to be the guy who barely speaks the language, but I went for it. “Speriamo che non c’è fouco”. Translated, it is the obligatory, “Let’s hope there is no fire”. If only one reader of this blog chuckles it is more than I got from my colleagues. They say jokes don’t translate, I have proven this true time and time again.