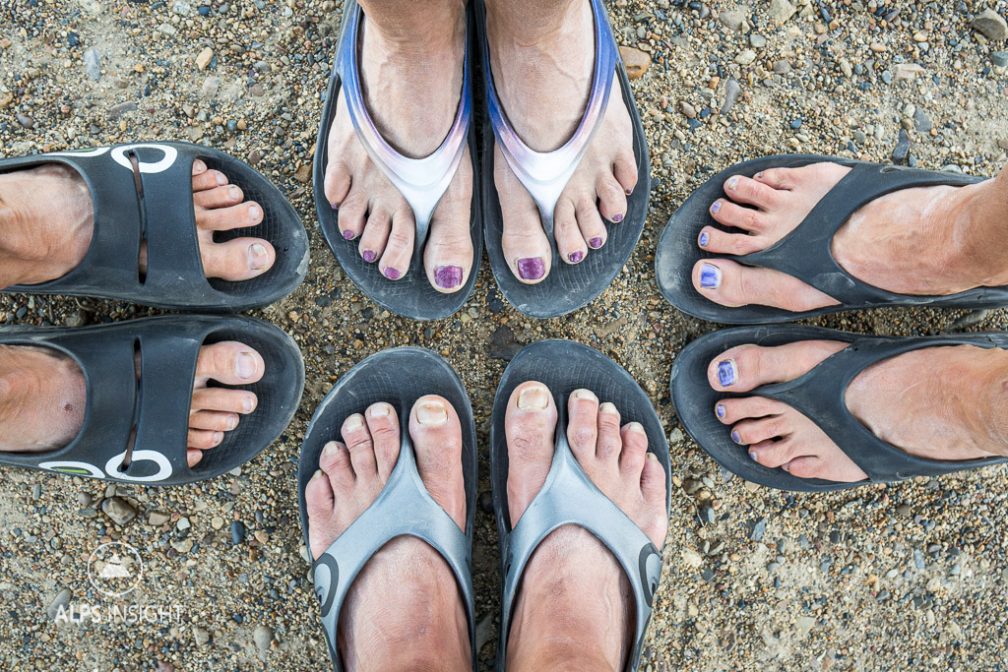 “Blah blah, Oofos, blah, so comfortable, blah blah blah.” Kim was going on and on about these things and was clearly determined that I too must own a pair.

Fresh off a Zurich – San Francisco direct, I was in no mood to shop, much less think. I knew I’d forgotten my flip flops and needed comfy, airy footwear. Even though it was winter, it was still California and we’d be road tripping to the Eastern Sierra.

I dropped a pair of size 9’s into my basket on top of gas canisters and a jug of Dr. Bronners.

In the following days, I discovered that I really did not want to put anything else on my feet. I dreaded the change from the supremely soft, form fitting sandals to anything that bound me. I was in love with the gentle rolling motion as I walked. First the cushy mid-foot impact, followed by just the right amount of squishy backward absorption before beginning the gentle arc forward. Wearing these things was like falling asleep in a small boat on a rolling sea.

Nevertheless, I love them. And, they seem to do exactly what they are meant to do: allow your feet to recover after punishing runs.

Had I been able to absorb what Kim was explaining to me as we stood in the footwear department of the Berkeley REI, I’d have learned that she discovered them when she began battling plantar fasciitis. She’d recently upped her training pretty considerably and began experiencing all the symptoms of this much dreaded injury. While researching how to manage it and prevent further injury, she came across the advice to try recovery footwear. Oofos came highly recommended.

After wearing them for a few weeks and trashing the shoes she’d been running in (a gimmicky new brand and style for her), her pain was lessened and she could run again. More than all that, she loved walking around in them.

Nine months later, I own three different pairs and don’t really wear anything else when not running. I don’t work for them and they don’t pay me to say this. I believe in genuine word of mouth promotion. When something is good, I tell others. Kim’s recommendation got me hooked, then the whole team for our Sierra trail running project. Now it’s your turn to up your recovery.

As a bonus, Oofos donates 2% of website sales to breast cancer research. We approve. It was during breast cancer treatment and it’s full-body side effects  that Kim discovered the benefits of Oofos for tired feet.