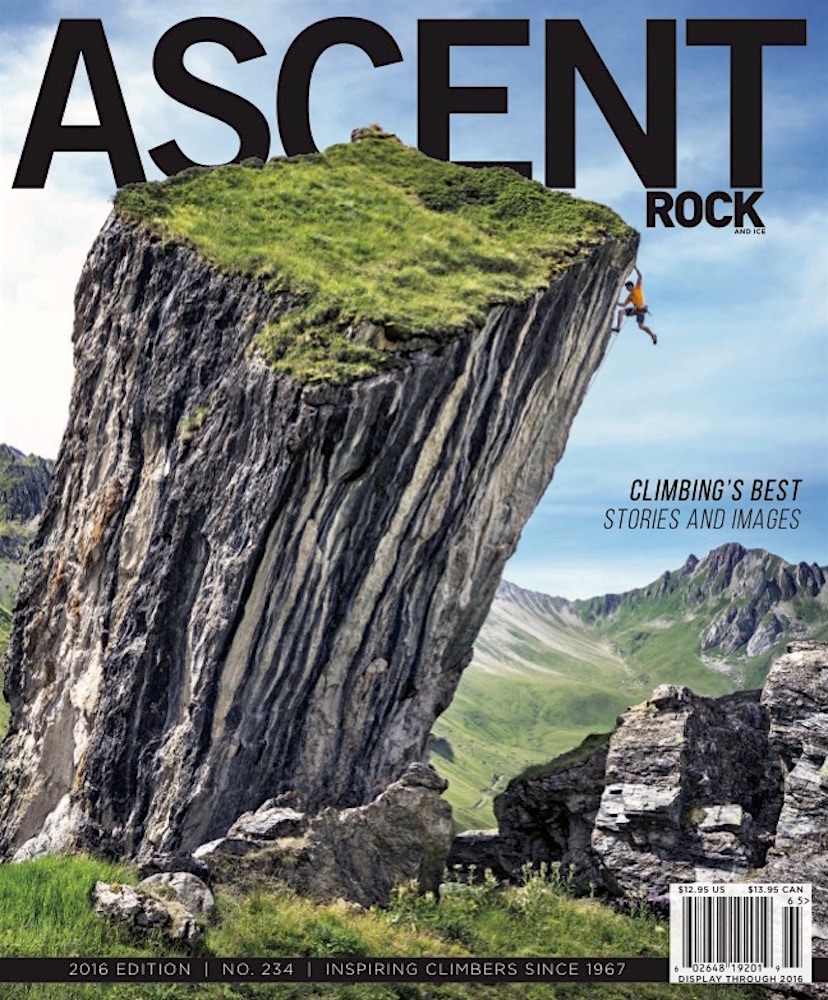 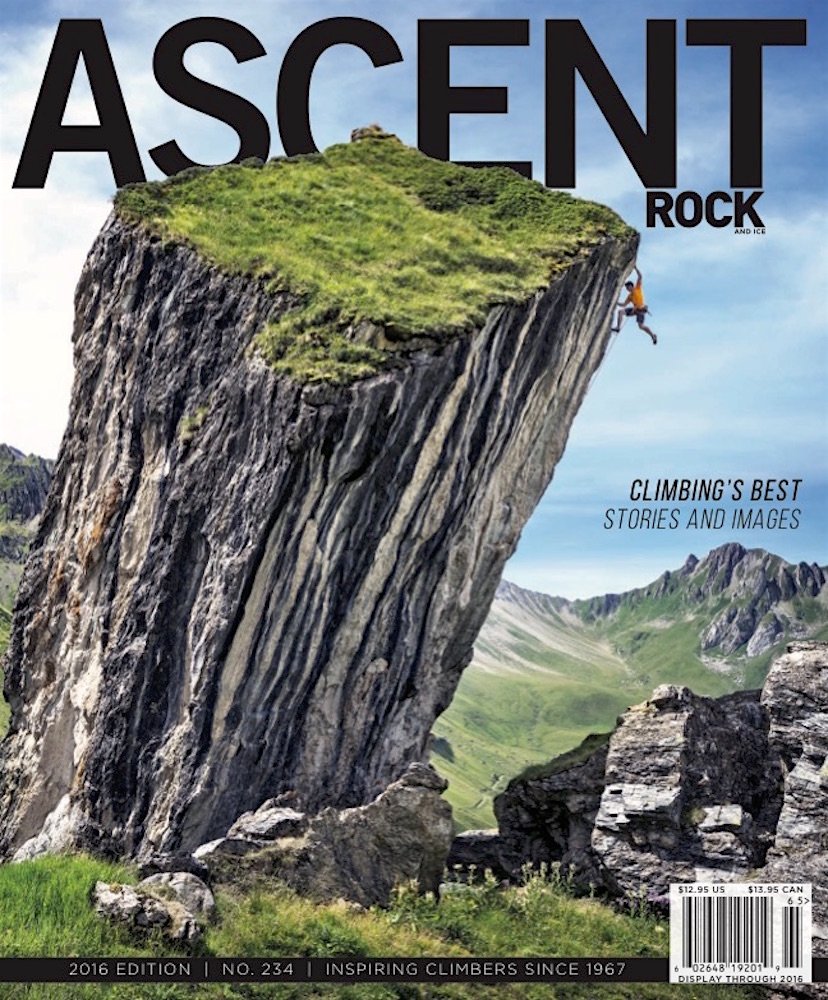 Even after 17 years working as pro mountain sport photographers for the outdoor industry, it still feels great to see our work used in prominent places. Likes and followers are great for social media, but there’s still nothing like magazine covers and ads. In other words… printed work.

For Big Stone Publishing, the producers of Rock & Ice and Trail Runner Magazine, we hit a grand slam for April, landing both of their special annual issues, DIRT and ASCENT. This is a big honor as both issues celebrate the best imagery from the sports.

The ASCENT cover is entirely the idea of our great friend, and partner for many projects, Simon Duverney. Simon knew of this route and sent me images, asking, “Do you think this would be good?”. The answer was, “I’ll be there tomorrow morning…”

For Trail Runner’s DIRT, this was a very real day in the mountains with a good friend, ace ultra runner Krissy Moehl. Together we left our home in Interlaken at 3 a.m. to run the famous Hardergrat. The goal was to hit the highpoint, the Augstamatthorn, for sunrise. We did just that and got one of my favorite running images that we have ever made, and we have made a lot of trail running images…

Switching to Sony a7 Cameras

In 2015 we made a huge decision to switch from our longtime Canon camera systems, to Sony. The decision came primarily as a result of weight, size and of course image & focus quality. Almost all of these clips were made with Sony (Dolomites ski photos were Canon), and the running, and Ueli Steck images were made much, much more comfortably with Sony! I love how light the Sony gear is! And razor sharp, perfect images are also appreciated, as can be seen throughout these clips. 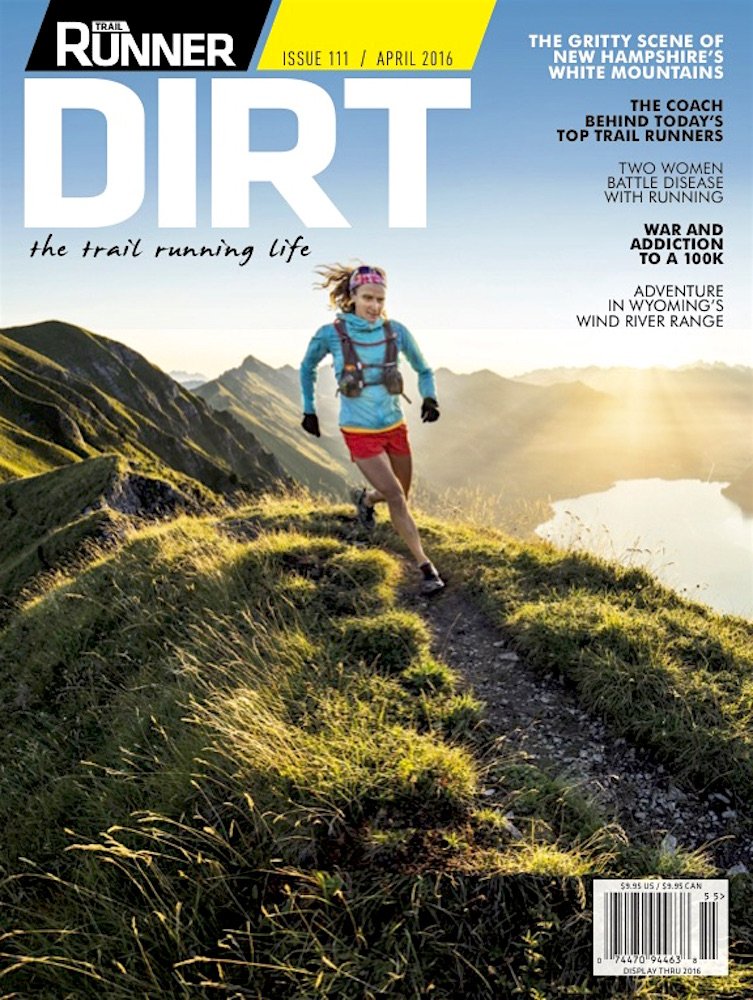 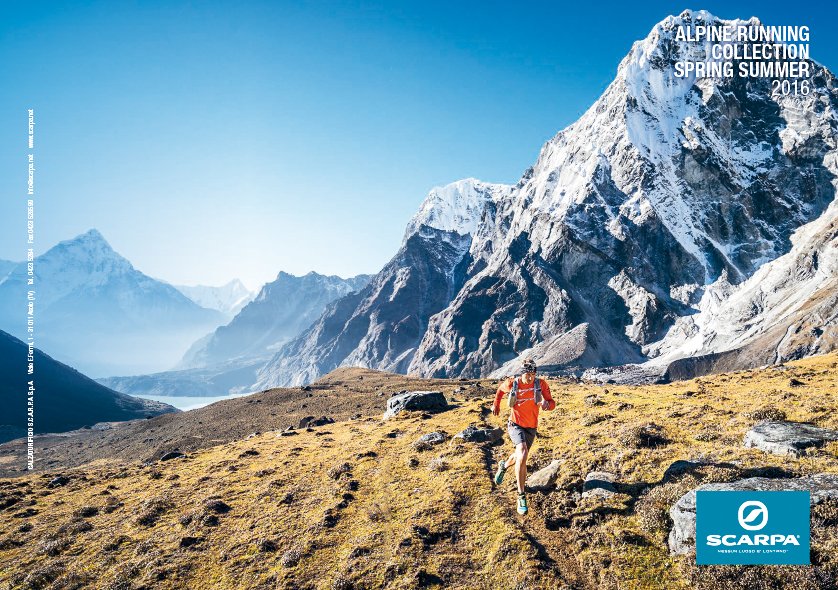 In the fall of 2015, we went to Nepal for a couple of different assignments. One of which was to accompany our friend Ueli Steck in to the Khumbu Valley and shoot him as he and Colin Haley prepared for a route on Nupste. But, with Colin down with a respiratory infection, and Ueli having some free time, we shot him training around the base of Cholatse, near where we stayed in Dhukla. During this time, Ueli would run Lobuche Peak from Dhukla, in under 2 hours, entirely in running shoes. It takes most parties 2 days. These images were made for Scarpa as part of the announcement for their phenomenal new trail running shoe line, of which Ueli played a major role in developing. 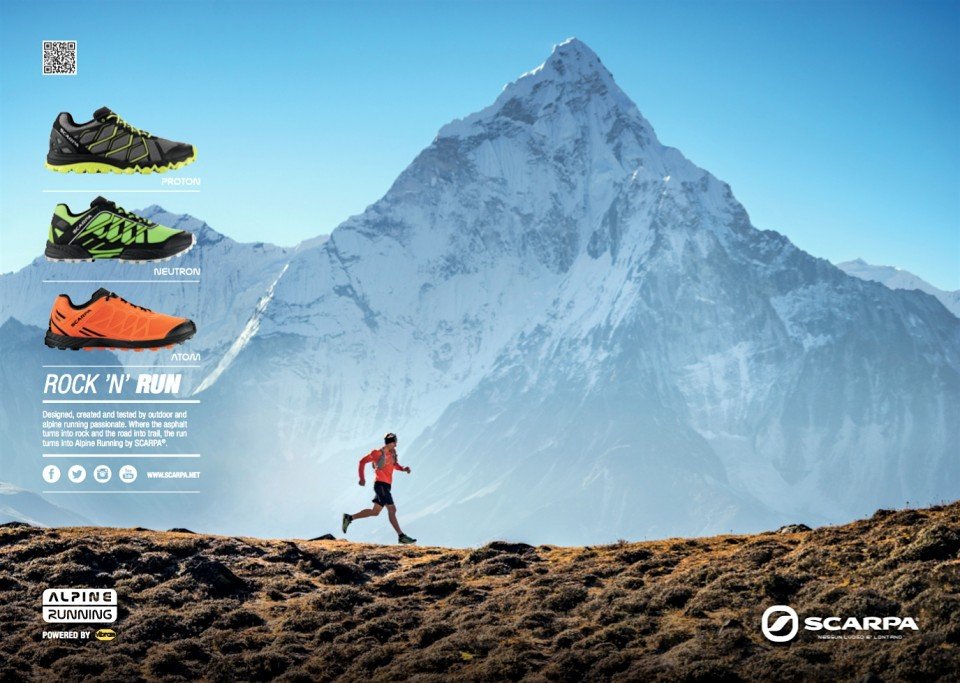 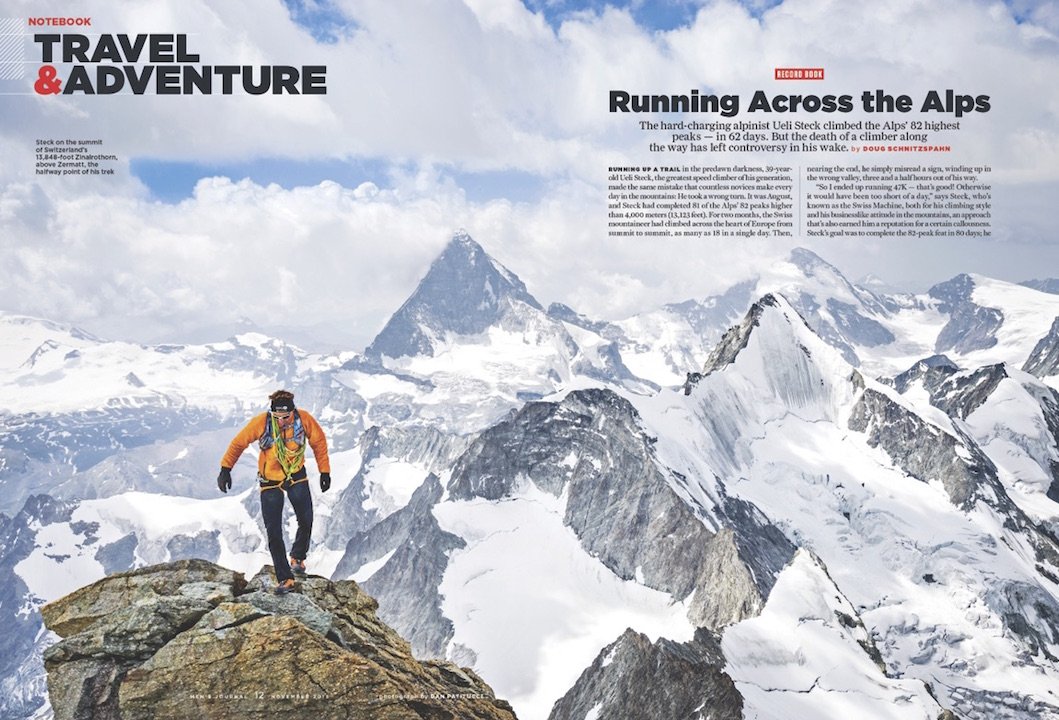 More Ueli Steck – the guy stays busy, actually – so do we… This was one of my favorite days of 2015. During Ueli’s 82 Summits project, I had been joining him for various things – one of which was to climb the Zinalrothorn together. One perfect July morning, I left Zermatt before sunrise to connect with Ueli at the Rothorn Hut, from which we’d climb the Zinalrothorn together. This was a day where I could be me,going as light as possible, running up to the hut, then just flowing along at Ueli speed for the climb – all the while shooting freeform.

Images from 82 Summits went everywhere thanks to Ueli accomplishing all 82 4000 meter peaks in 61 days, entirely under his own power. This is just one example of use, in Men’s Journal, from near the summit of Zinalrothorn. 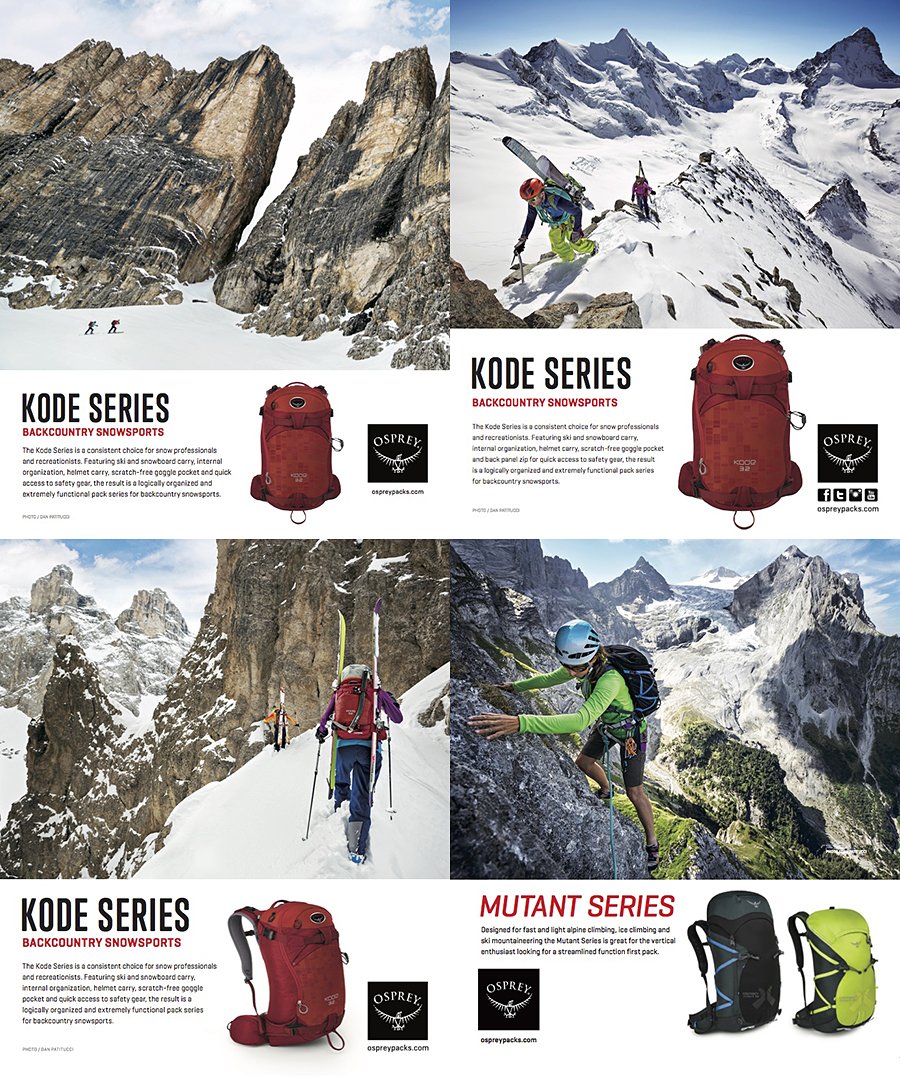 For 2015, we developed a partnership with Osprey Packs so as to include their gear for most all of our projects. They were along for just about every day we spent in the mountains, which is 300+ days a year! 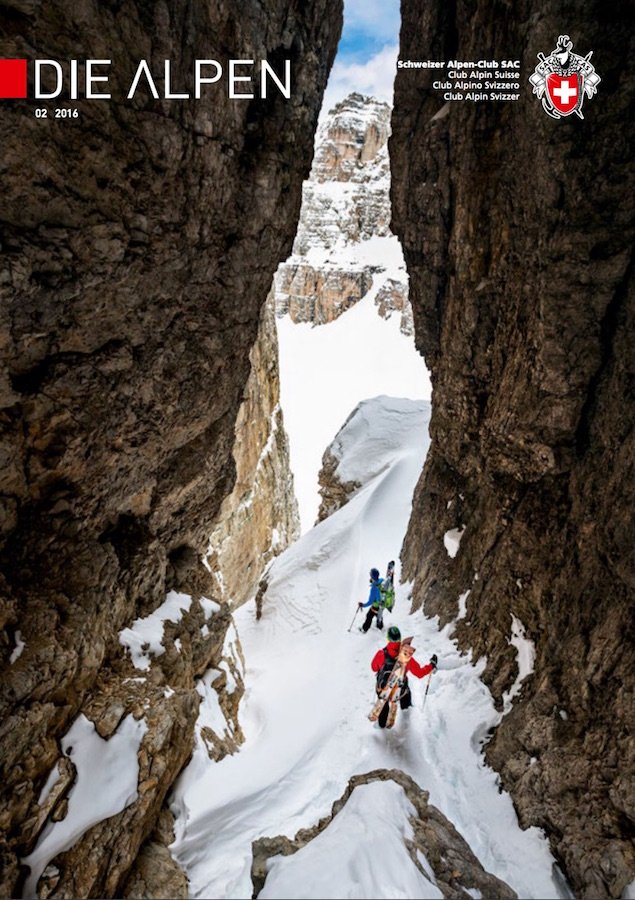 Finally, a cover that in Switzerland is always an honor thanks to just about every citizen seeing it – our third Swiss Alpine Club Die Alpen cover. This image is from the Italian Dolomites during an incredible couloir tour with our great friend, and mountain guide, Alberto De Giuli.