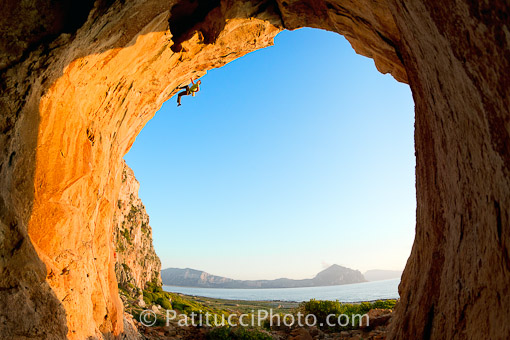 Within 12 days of one another, we had two very different climbing photoshoots. The first was ice climbing with Kurt Astner, one of the world’s best ice climbers. This assignment had us go to Norway’s Lyngen Alps to shoot for W.L. Gore and their new Gore-Tex material, ProShell. 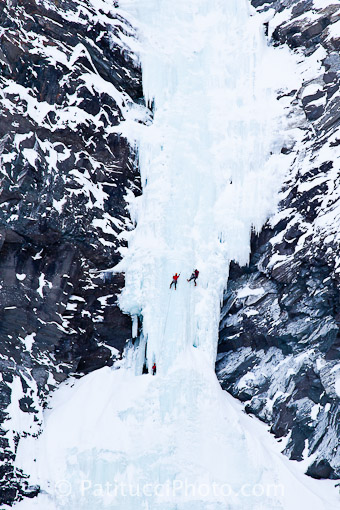 On a fixed rope, I hang next to Kurt and follow him as he climbs

After Norway we headed home, jumped in the car, and drove to Chamonix for a three day women’s catalog shoot for Wild Roses (Blog coming). From Chamonix we met up with good friends Christof and Evi from our hometown of Bruneck and boarded a flight for Sicily and our climbing destination, San Vito lo Capo. Both Christof and Evi are superb climbers. Best of all, inspired by the photoshoot, both were well prepared and fit to pull hard.

Shooting climbing is hard on both camera gear and the body. Shooting ice climbing compounds all of this in tortuous ways. Not only are all the usual climbing logistics present, but there are lots of sharp things around and everyone wants to keep moving because it is cold, painfully so. To fend off the cold requires bulky clothing, and this contributed to a small disaster. In an aggravated effort to keep moving, I was throwing lenses loose into my pack, ignoring the lens tubes that were supposed to be their home. The price… a broken Image Stabilizer in a 70-200 and a broken housing on a 17-40. Thankfully the loss of lenses came at the end of the shoot and not the beginning. 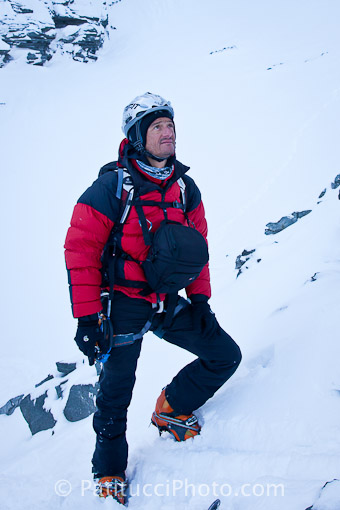 Ready to go with the chest mounted camera bag, key for working on a rope.

LowePro Camera Bags, with whom we recently began working closely with, is going to be receiving more of our attention as I commit to being more careful with gear. For me, dedicated camera bags have proven essential to the safety of camera equipment I must rely on.

At the end of the day everyone was happy. Janine and I felt good about a job well done. Kurt had made a first ascent of what he has called “White Chocolate”, WI6, Grade IV. And Gore happily reported that we nailed the look of harsh conditions they were after to market their new product. Success.

Last summer, after photographing Kurt Astner climbing on the Tre Cime di Lavaredo in the Italian Dolomites, we posted what became a very popular blog story. During the shoot, I wore a helmet video camera to capture what I see while shooting in these dramatic locations, I thought to do the same for this ice climbing shoot. It seems the perfect opportunity to see what it looks like to be the photographer, to get my perspective of what I am making photos of, and to watch Kurt climb. Beneath the video are a couple of stills that show the end product of what we were after. 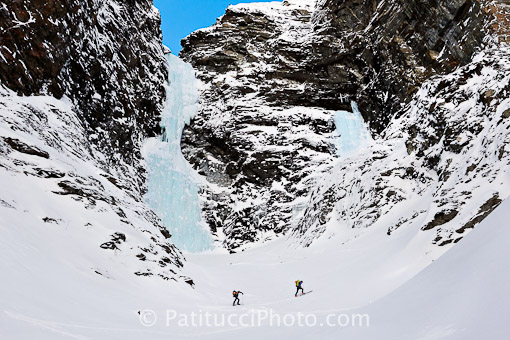 Arriving to the ice fall Kurt had found after a two hour ski approach. 200 meters of what may be unclimbed, steep ice. 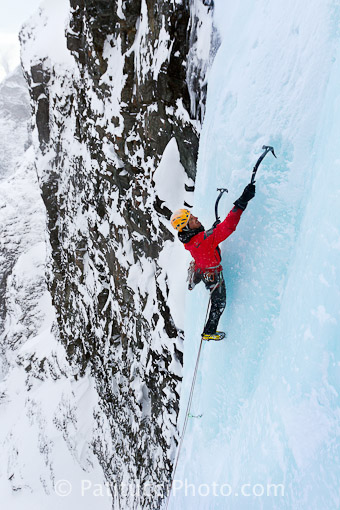 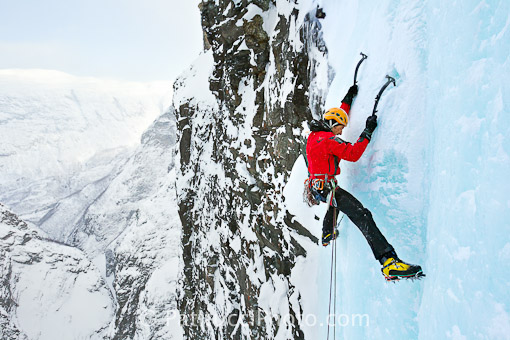 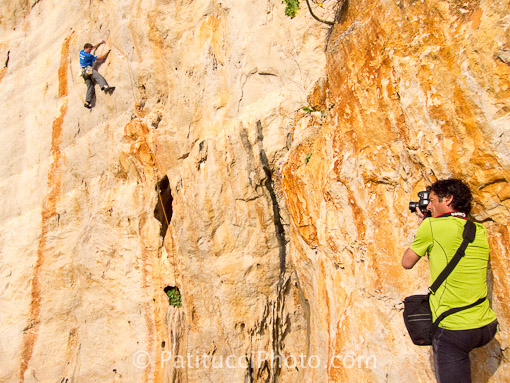 A little friendlier terrain than the ice

Less than two weeks later we were in a different world. Sicily’s seaside village of San Vito lo Capo has recently become a hotspot for sport climbing. With absolutely perfect limestone walls lining the Mediterranean coast, an ideal spring climate and superb food – San Vito lo Capo made sense for our next shoot, and an escape from a poor winter in the Alps.

Shooting rock climbing, especially sport climbing, is quite easy compared to what we faced in Norway. In Sicily the routes were never more than 35 meters long, were always safely bolted and had flip flop approaches. I could quickly get a fixed rope in place or even shoot from high boulders next to climbs.

The trick here was having the right people, people who could get on hard routes and climb them in style. Climbing images require a sense of power while at the same time looking to be in control. Christof and Evi are ideal. 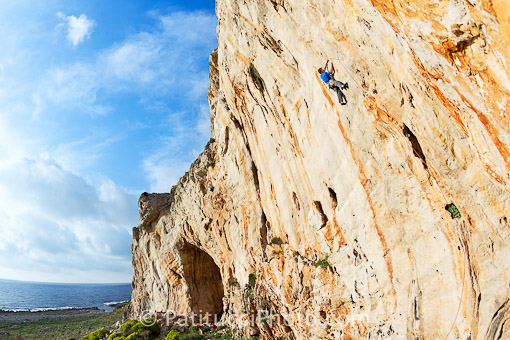 The very photo being made from the above right image 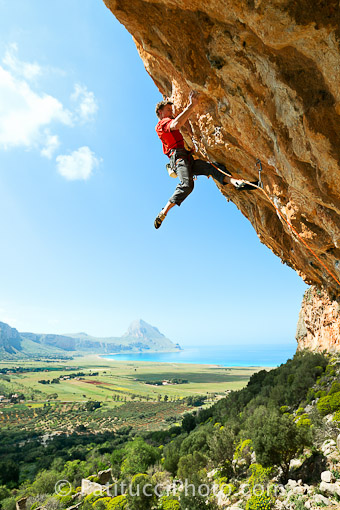 Christof at the Castle of Aragon, 7b 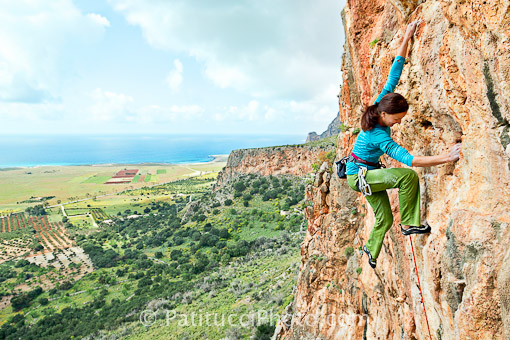 Evi on the Cinema Paradiso Wall, 6b 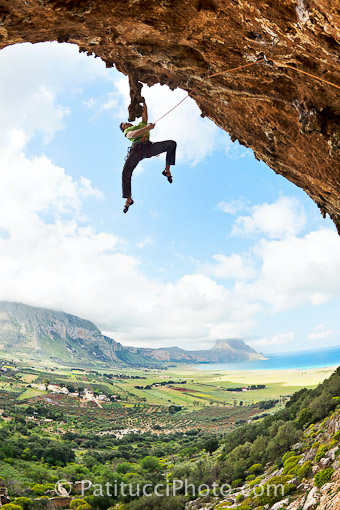 Christof making things look dicey, because they are 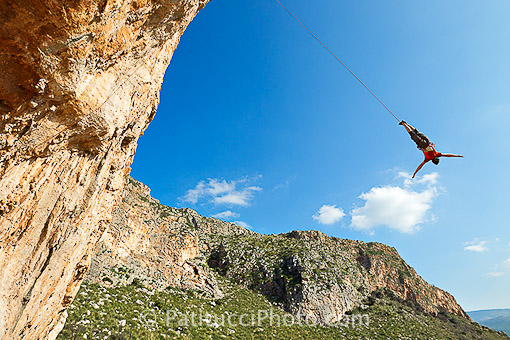 In my opinion, for all things in the photography world, less is more.

For climbing, in almost all situations, I take the following:

8GB film cards – I like 8GB because I don’t have to change them so often and run the risk of dropping one. And, they aren’t so big to potentially have every image if they do get dropped.

Canon 15mm 2.8 – For getting the wider angle with the 1d Mark IV’s conversion

Once I am on the rope I have a small top opening pack hanging below me that serves as a bucket catch all for lens tubes (be sure to actually use lens tubes…) and anything else I may need. The chest mounted camera bag allows me to quickly stow the camera to move up and down on the rope. The less is more policy is key for staying focused on the shot and the movement of the climber, not fussing around changing lenses or fiddling with various things, also the simple need of staying mobile and light. 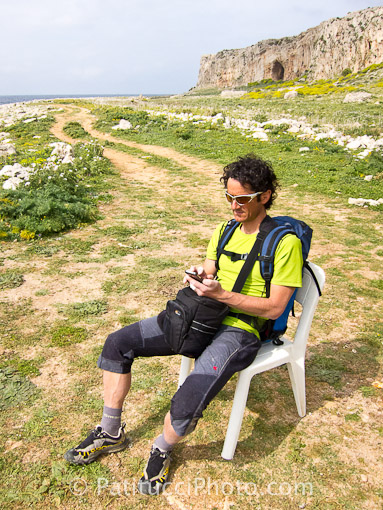