One of our most effective product photos, shot for a client who said, "Shoot what you want".

As a professional photographer, there is some hard wired belief that one must shoot assignments. As creative people, shouldn’t we be out making images that come as a challenge from our clients? Somewhere along the lines this all became a glamorous theory.

Rather than saying, “I am shooting stock” or “I’m scouting” or even, “I’m really not doing anything”. Most photographers will broadcast, “I am on assignment”. It just sounds better. But is it?

I would argue that for me – shooting assignments has not been all that it is cracked up to be. There have been the dreamy ones; National Geographic Adventure sending us to shoot a big section of the Swiss Alpine Route. Backpacker having us hike the Summer Haute Route. Trail Runner sending us to Patagonia to run the Torres del Paine Circuit. And of course, a few dreamy commercial gigs.

But for the most part, it is a terrible let down. Here, a photo editor, or even other photographers will say, “Every job is a challenge, you must put your creative skills to the test and come up with something unique for the client, no matter the subject matter”.

Fair enough. But not all of us are so inclined to look at it that way. Perhaps it is because Janine and I primarily shoot stock. It is a rare day where you will hear us say, “We are on assignment”. Shooting stock gives us 100% freedom to do what we want, when we want, how we want, and where we want. Yet all with the end user, the potential client, in mind. They just don’t know what they want yet. We prefer to make it for them and see who wants what.

We have seen some curious things while “on assignment”. We were once sent to a town in the US that was on a magazine’s Top 10 List. The problem was, we discovered the town didn’t actually exist, rather it was a crossing of two roads, Main and Broadway. It all sounded good, but apart from a gas station and a market specializing in past expiration date food, it was hardly a dream town. It was the exaggerated result of a writers imagination. That town was later bumped outside the top 10.

And there were the catalog shoots we were called up to do because the clients loved our style and wanted an all new, authentic look for their images. But once on location, we were told how to shoot everything and exactly as they had been doing all while being entirely contrived.

And finally, shooting commercial work where the client insists on nothing backlit, no unique angles, no blurs and they give you product to shoot that may as well be camouflage for the environment. Oh, and they only want blue sky in the mountains but told you which day you had to shoot. Followed by, “Why is it cloudy?”.

I guess some photographers would look at all of this as a challenge. I happen to not look at it this way because at the end of the day I like to see images coming into my editing program that I am proud of. Thankfully there are still many clients who understand that the best images from us come with time. They tell us what they want, compensate us fairly, and expect great work, not in a day, but weeks or even months down the road. For them we work very hard, communicate throughout the process and have fun making their images. Certainly not every client has this kind of time, but many are at least able to provide creative freedom.

In these days of lean budgets we have made a decision to not just work for anyone because work is slim, but to focus on clients whom we would be best suited to support with our style while seeking a lasting relationship. My Post titled “Saying No to Make Yes More Effective” was my mantra this summer. It worked for us, and more importantly it worked for our clients.

There is great reward in looking back on what was influential to us while growing, and to see how those influences played out. For me, I still refer to a letter that was read to my class in 1999 at the Brooks Institute of Photography. Paul Liebhardt, who became both Janine and I’s mentor, read us this letter. At that time, before ever really working as a photographer, his beautifully constructed letter struck me as what would be the truth for me as well. Now, looking back 10 years I have had it confirmed to be true. For us, our favorite images, those we are most proud of and that have made our clients most happy, have resulted when we’ve been provided the freedom to pursue our own vision.

The author, Ernst Haas, later went on to be a great photographer and is considered to be one of the first true masters of color.

Some of our personal favorite images are below, images that represent how we like to photograph what we experience and see. 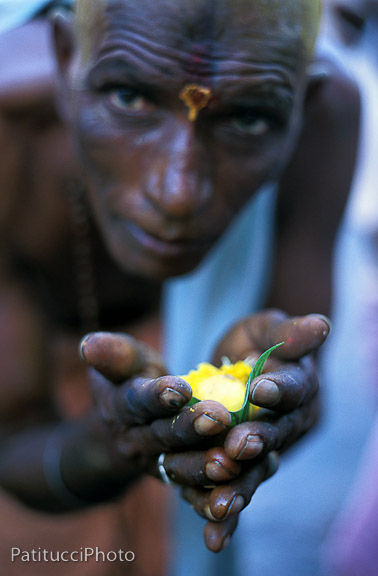 Dan's favorite image. The memory of this gentle man offering me this flower is incredible. The photo had to be made in less than a few seconds, it was truly a captured moment. 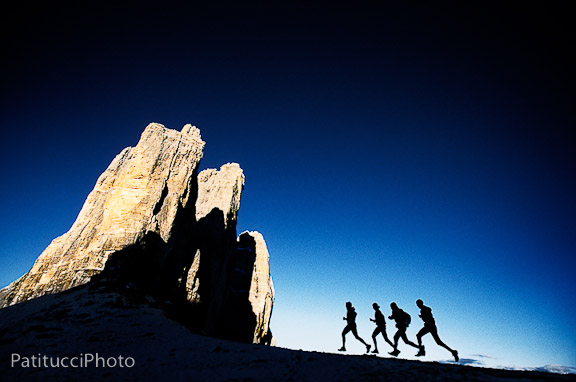 Four runners at sunrise in the Dolomites. An assignment with complete freedom.

Janine's cherished image of a Buddhist monk's reflection on a flooded street in Thailand. No assignment, personal work.