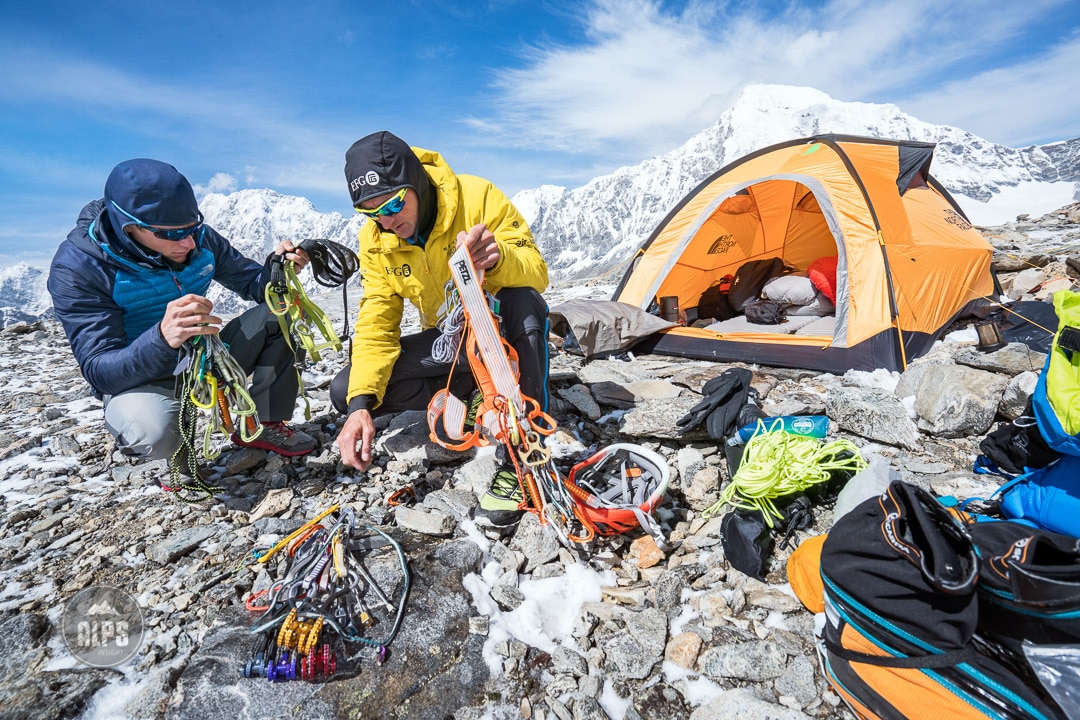 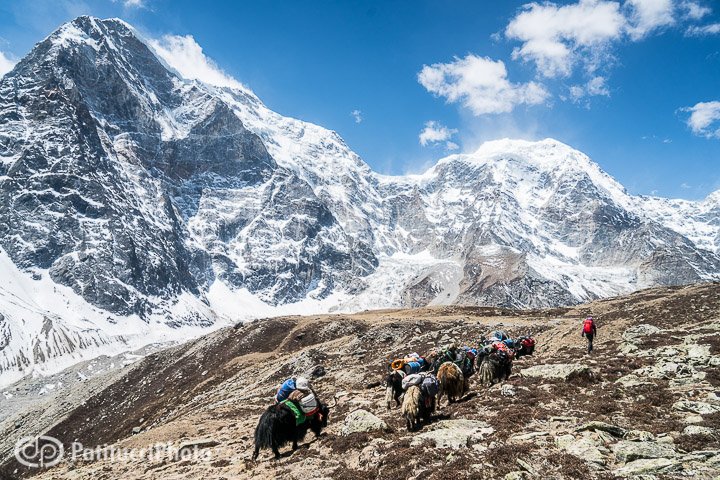 When I started as a photographer I simply wanted to document what I saw, to be a journalist, a National Geographic type shooting assignments where I responded to and anticipated situations. But, I was a mountain guy and had been working in the outdoor industry with many friends and connections, which I would soon realize had already put me on the path I am still on today. With the exception of the occasional editorial travel assignment, being a journalist never happened, being an outdoor industry commercial pro did.

So for me to be able to combine the things I love, mountain sports, travel and documentary photography – is pure joy. What better project than a Himalayan climbing expedition with two of the world’s best alpinists, and friends, Ueli Steck and David Göttler.

Their project was a new route on the 2000 meter south face of Tibet’s Shishapangma (8027 meter). Our research prior to departure revealed that very few people have been to the area, in fact finding photos proved almost impossible. We’d be visiting a remote part of the world for up to six weeks with a team of just six people; Ueli, David, Janine, myself, our Nepali cook Sitaram, and Tibetan camp helper Nanje – we would likely see no one else the entire time.

In the end we were there five weeks with a mixed bag of results. Throughout the Himalaya, on both the Nepal and Tibetan sides, the weather this spring was consistently terrible. For David and Ueli, they had to study as much forecasting as they could get their hands on. In our five weeks they made two single day attempts via different routes (the British and Girona Routes) but both times came up short of the summit in rapidly deteriorating weather. However, the style in which they climbed and the conditions they had to work with left them feeling like they did their best. On the Girona Route, the team reached 7800 meters but opted not to continue as the descent was becoming dangerous due to snowfall and low visibility. Perhaps most significantly, David and Ueli learned that they are a very compatible team. I saw this as well and am excited to see what they might accomplish together in the future.

For Janine and I, we were immersed in the Himalaya, shooting, exploring and being 100% disconnected from the world. All things we intended to do as we knew the experience could be huge, and it was. This then is a very real image collection that we hope reveals what it is to be on an expedition. 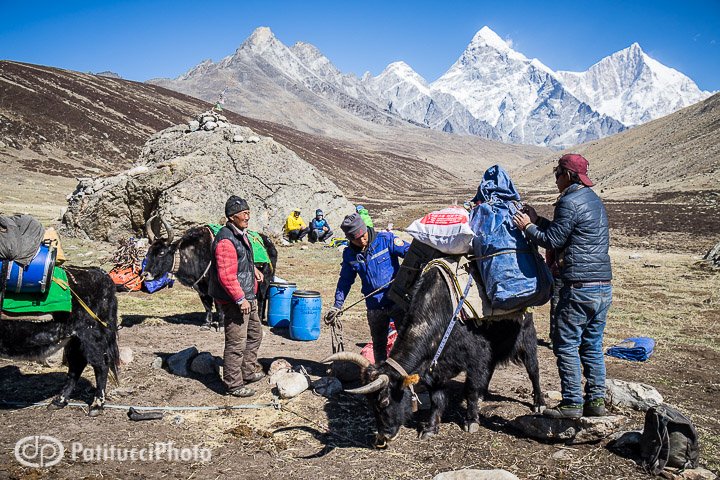 Loading the yaks on the morning of our second day hiking in to basecamp. The approach to BC was two days, while we were able to hike out in a day. 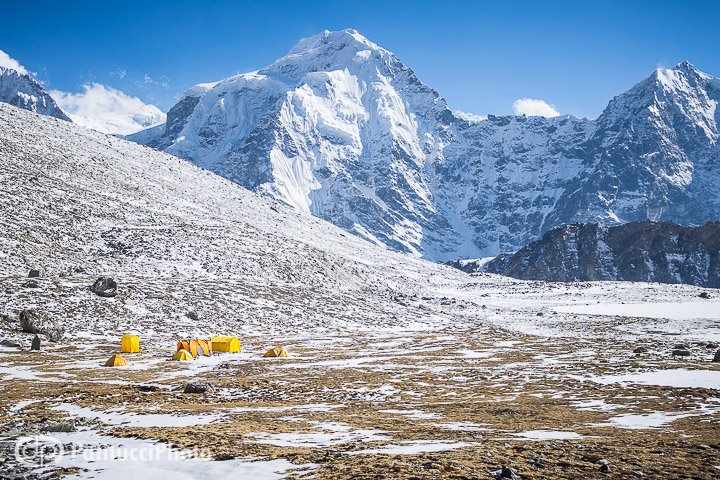 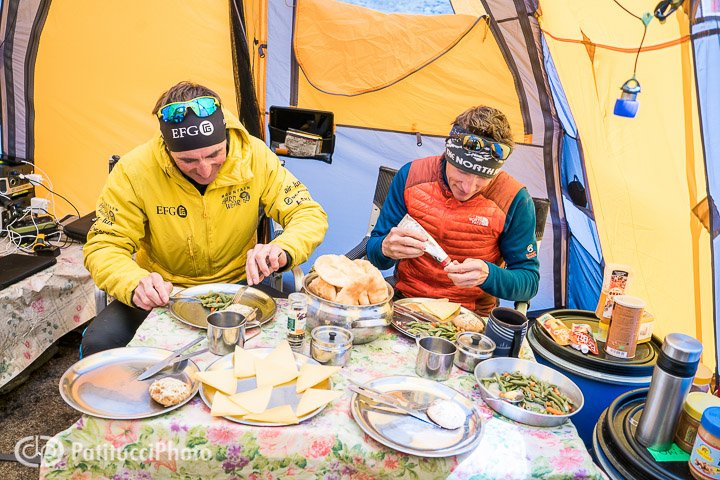 David had his longtime Nepali friend Sitaram join us as BC cook. He was much loved and revered! We didn’t go without good food. 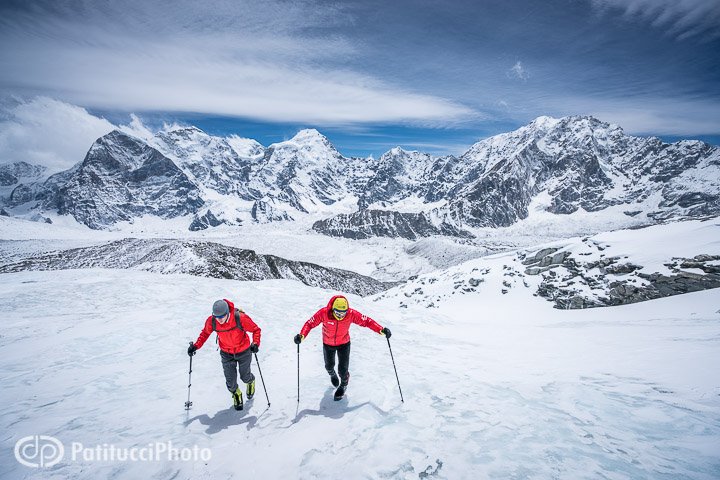 Directly above BC we were able to access all kinds of peaks, some just walking, others with some climbing. This one was 6100 meters. It was impressive to see how Ueli & David became stronger as the weeks went by. 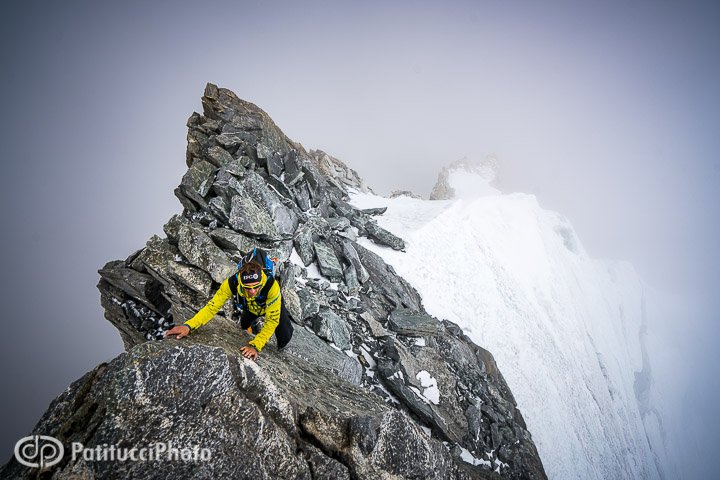 Ueli on our BC alpine peak. Twice we started it in perfect weather, twice we got skunked for views by the time we hit the ridge. 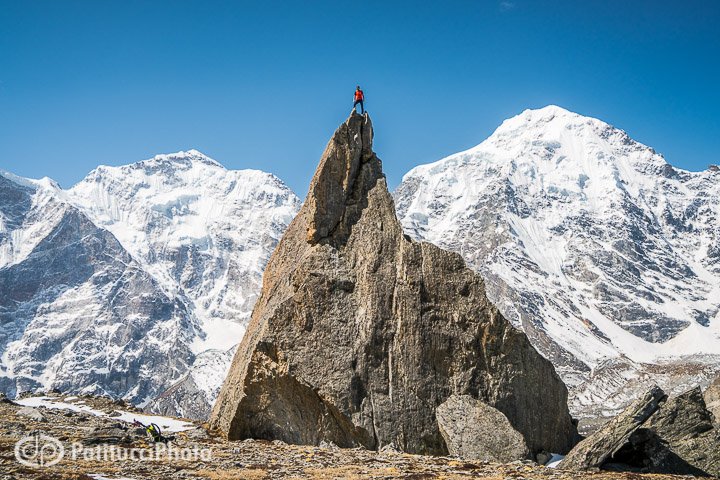 The BC bouldering was truly brilliant – not just something to do in a remote place with loads of time on our hands, this was high quality and minutes from camp. But, pulling at 5200 meters took some effort. 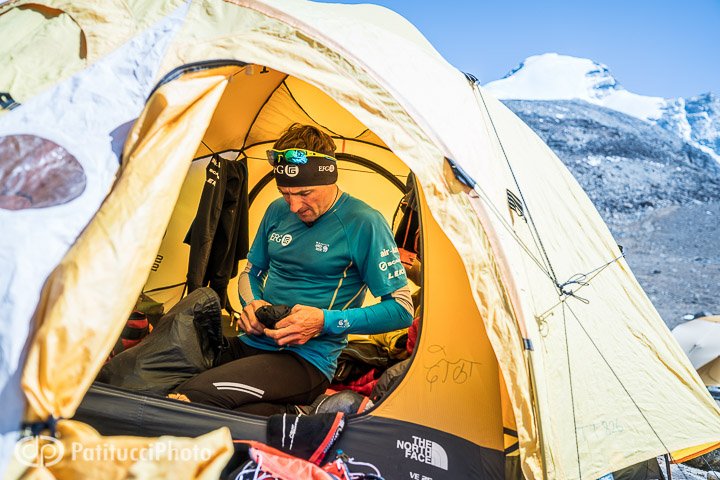 Ever motivated, Ueli gets ready to go on a running mission. 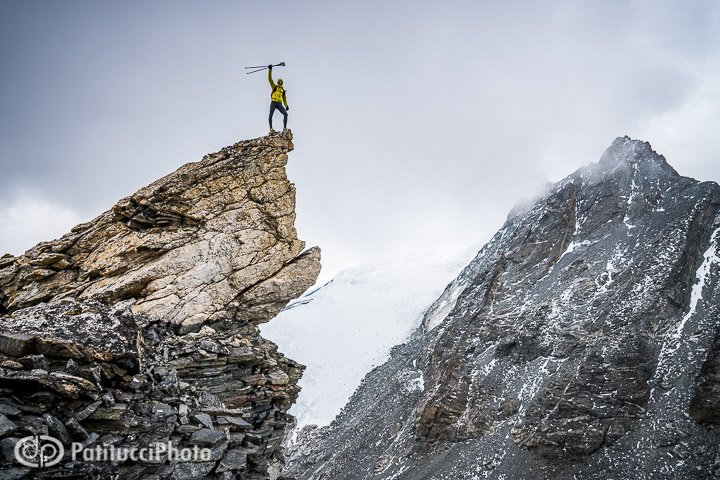 Yet another day Ueli and I left camp in the sun and descended in the snow. But, not without some finds along the way. I turned around shortly after this photo while Ueli continued on to just about the summit in the background. 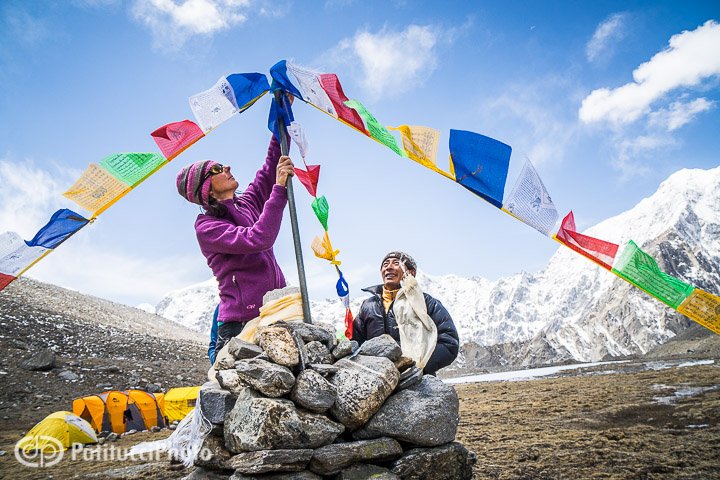 Janine and Sitaram preparing for the puja. The Nepali and Tibetans will perform a blessing (puja) for the climbers prior to their climb. Prayer Flag Tip: we learned that when hanging prayer flags, the blue flags must always be strung at the highpoint – blue to the sky. 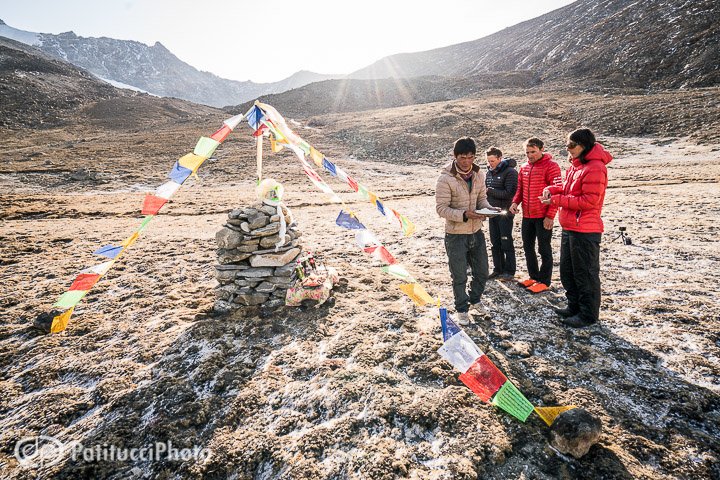 The morning puja before setting out for ABC 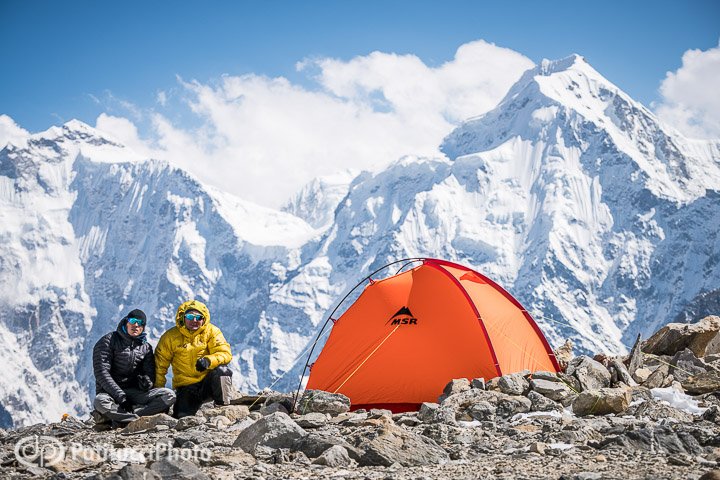 David and Ueli at ABC 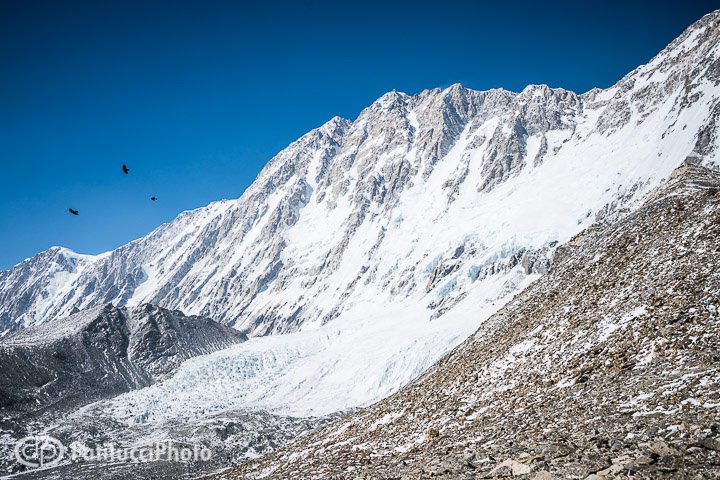 The South Face of Shishapangma as seen from Advance Basecamp (ABC) 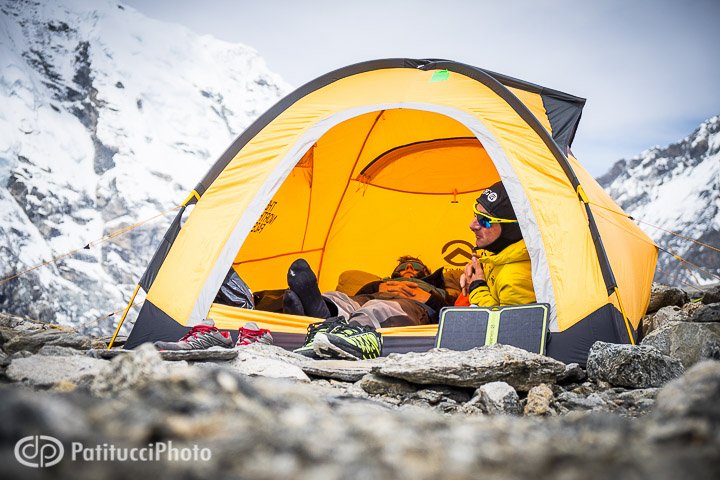 ABC: Waiting….. lots and lots of waiting. I remember Ueli stating, “We must not try too early, we need to be patient for conditions”. So they watched movies, read, and passed the time as best as they could until they knew the time was right. 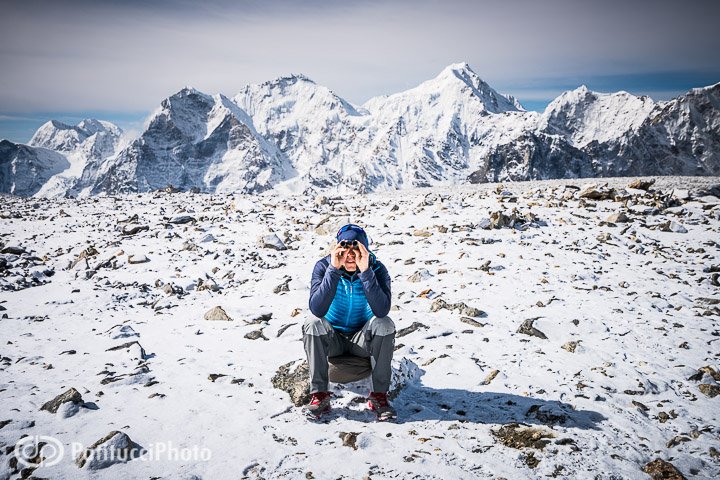 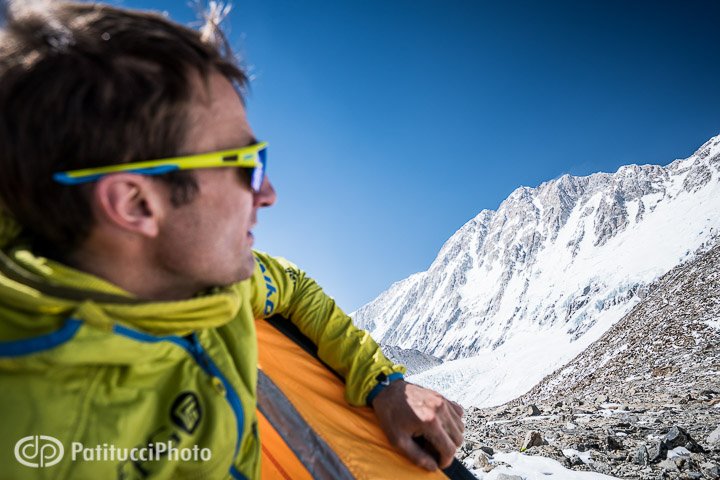 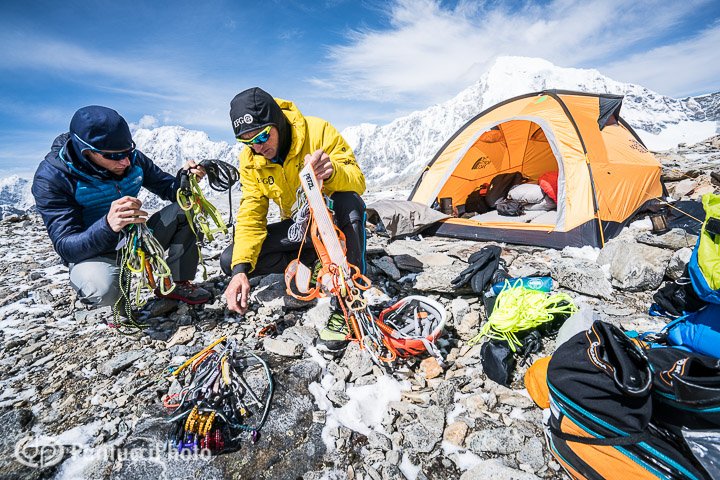 Packing gear at ABC when a go on the new route looked possible. That window would slam closed forcing a re-think towards a one day effort on another line. 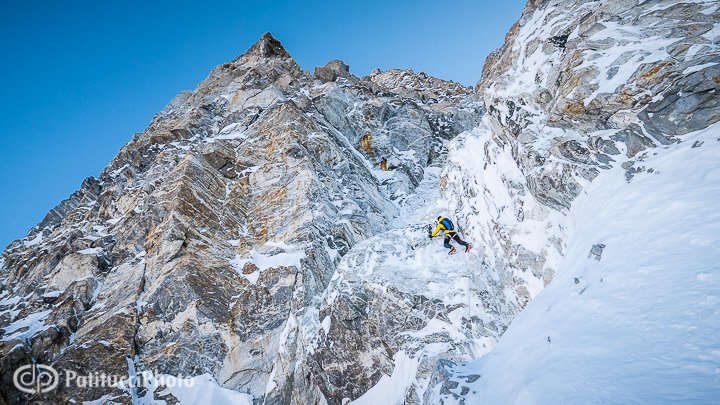 Ueli in technical terrain on the British Route, their second route on the mountain. Photo: David Göttler 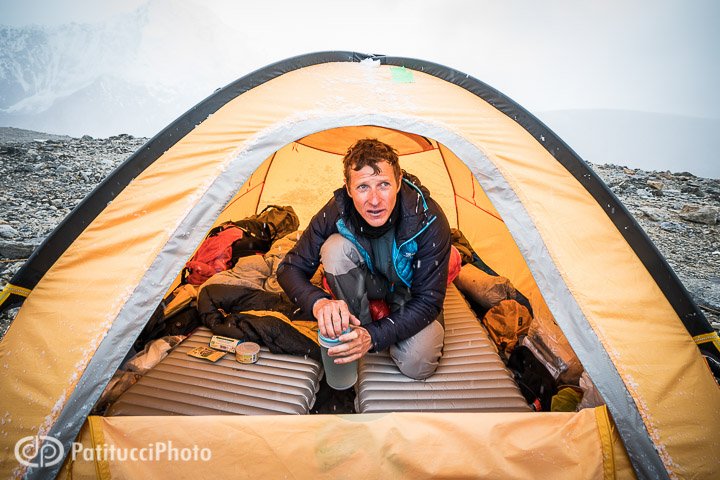 While on the British Route, their second attempt, thick clouds had engulfed them early in the afternoon. We continued to watch for any progress in the hopes that things weren’t as bad up high. But soon they appeared, not on they way up, but down, and moving quickly. Once back on the glacier and in what had become heavy, driving snow, they moved quickly to ABC where we waited with food and drink. Everyone knew that was it, the trip was done, and after five weeks we’d be heading home. There was no summit, but there were two experiences on the mountain. 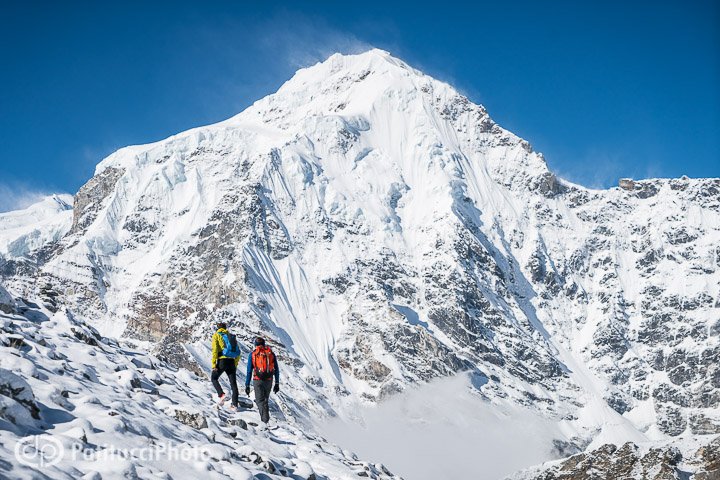 On our last morning we woke to 10cm of fresh snow, firm confirmation that the season was a tough one. But, the long walk out was beautiful.