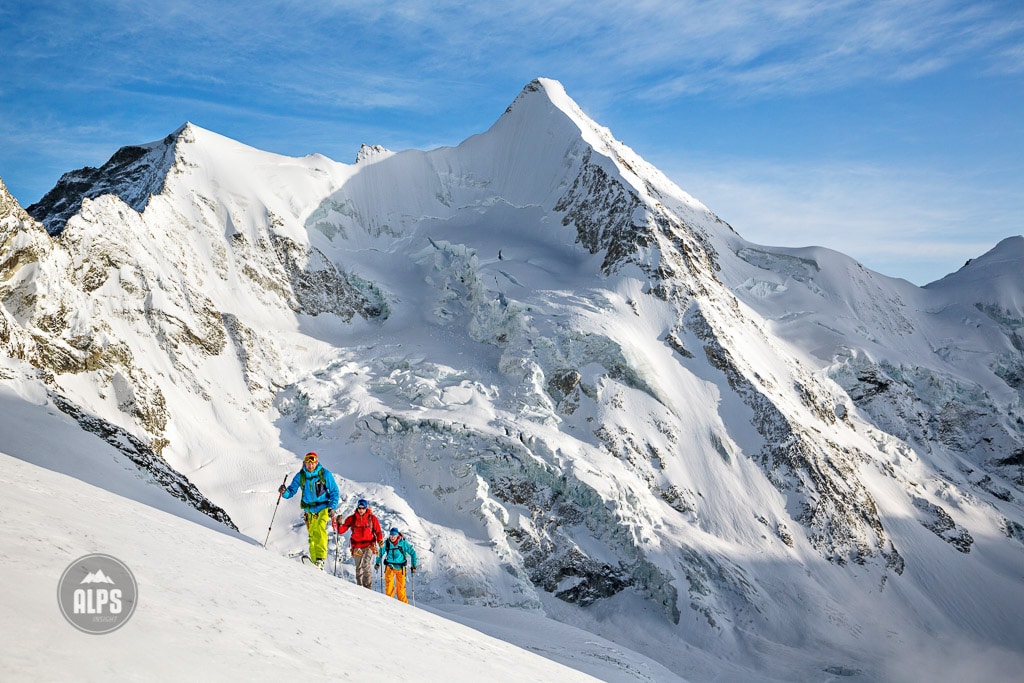 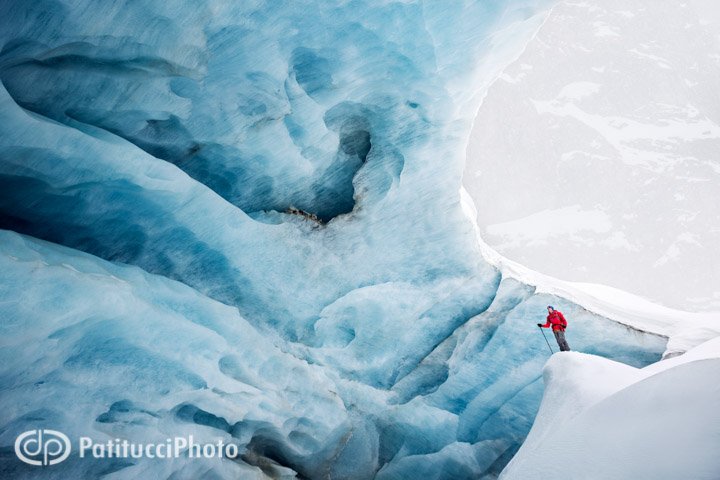 Carved into a beam inside the Konkordia Hut is, “D’blau Himmel und d’Sonne sind sääga, aber au d’Wolke, de Wind, und d’Rääga”. The blue sky and sun are beautiful, but also the clouds, the wind, and the rain.

As a photographer, occasionally you get it all, right when you need it. After a frustrating winter of poor conditions, our last ski trip, and photoshoot, was one of these rare occasions. A great crew and perfect weather, for photos and fun.

Together with a group of friends we headed to the Cabane du Mountet, deep in the Alps, in a remote and massive cirque at the very end of the Val d’Anniviers. Thick clouds and balmy temps accompanied our approach up the Glacier de Zinal, a 10km, 1200 meter gain slog. Towards the end of the day the temps dropped enough to snow, and we finished in a whiteout, relying 100% on GPS to find the hut. It was opening day for the hut’s spring ski season and we were the first guests. But we’d come for more than a clean pillow case and blanket. 20cm+ of snow would fall over night. 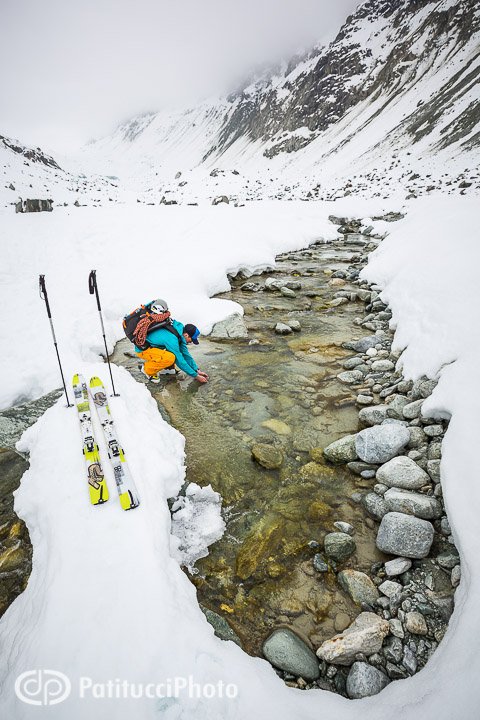 Mathis Dumas stopped at a ski through window for a beverage. 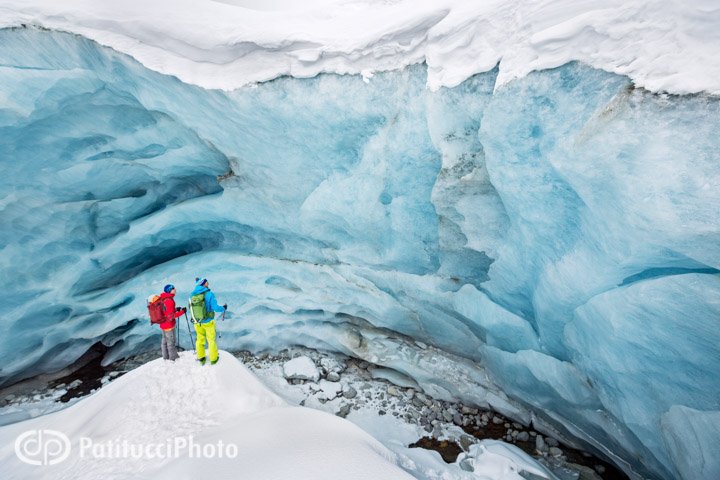 The next day’s forecast was for continuing snow, but afternoon clearing. Janine suggested we sleep late and take advantage of the improving weather. But sleeping late is not really possible in a hut, even when you are the only ones there. We rose early, ate our dry bread and jam, and headed out to enjoy the morning. Objective number one was the 3730 meter Trifthorn, a super classic ski peak with a steep ramp off the summit. 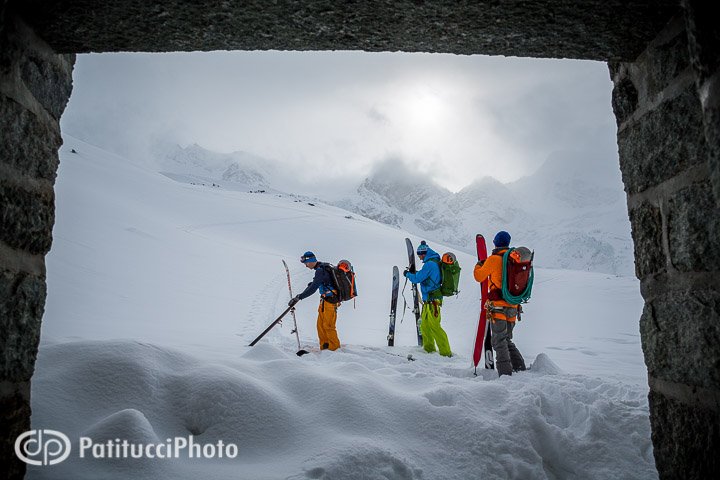 Through the door of the Cabane du Mountet is one giant playground. 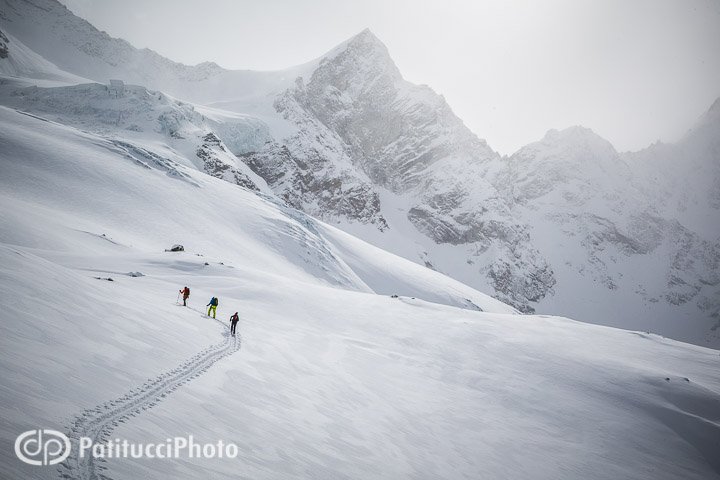 Headed for the Trifthorn, above center. 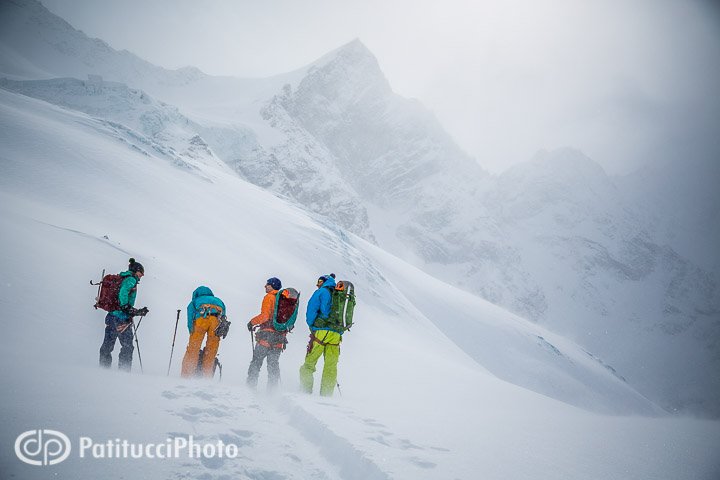 Here’s that wind and cloud, and yes, just as beautiful as the sun, but not nearly so pleasant. 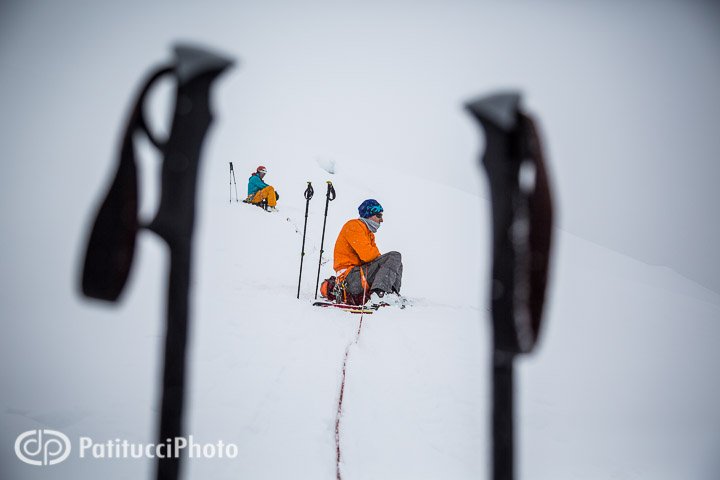 Just killing time waiting out the whiteout on the glacier below the Trifthorn summit. “What do a mountain guide and condom have in common?”, asked Simon….

We made our way up in the fresh snow, anxious to be making turns. Progress was slow, we could see nothing, and soon we were surrounded in crevasses and seracs. Ropes came out. Our climb suddenly became much steeper and the GPS confirmed we’d arrived at the ramp. With all the new snow, zero visibility, and the fact that we were on a glacier – we had but one option. Sit down and wait. Well, that was the “photoshoot” talking, we really wanted to go down. I held out hope that the skies would open based on the fact that it seemed brighter in the distance. As we all sat, 10 meters apart, roped up, Simon Duverney entertained us all with his usual hilarity. It was absurd, and finally we admitted it. At least we enjoyed skiing half of what we’d come for. The snow was perfect.

As expected, below, we broke into the sun and realized that the only bad weather was on the Trifthorn. The rest of the world was swirling clouds and blue sky – it was a perfect spring day for ski touring. We locked on to objective number two, the base of L’Epaule, a 3700 meter highpoint and corniced ridge which would give us a 1000 meter descent to the hut. We chose wisely and enjoyed a great tour that allowed us to be out late for some good light. 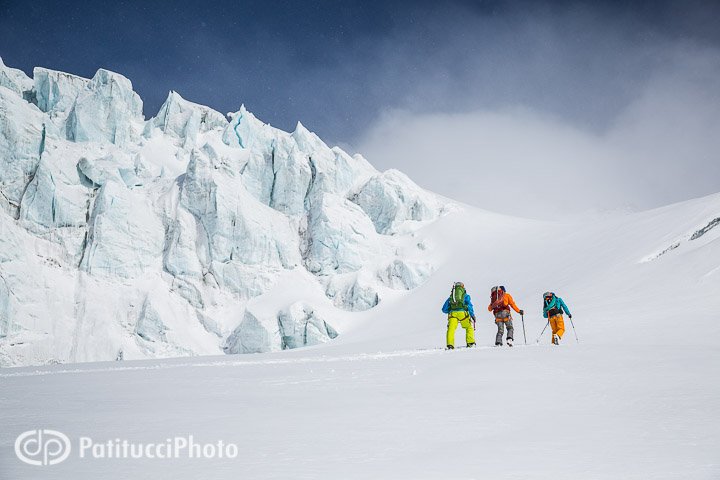 Back in the sun, back on the up. Glaciers are a continual source of awe. 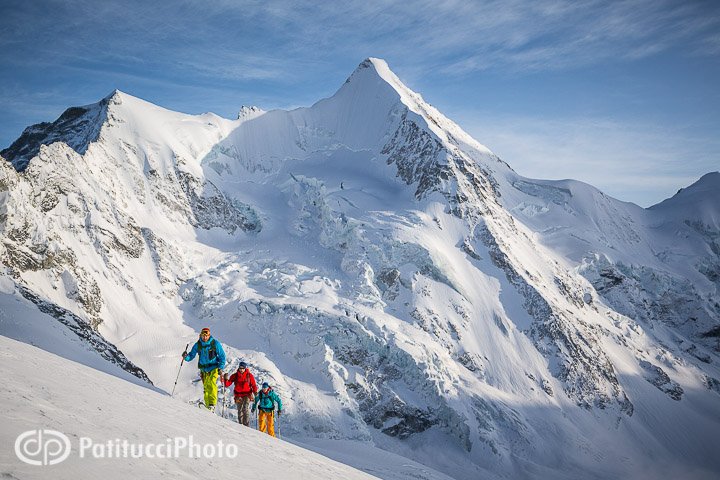 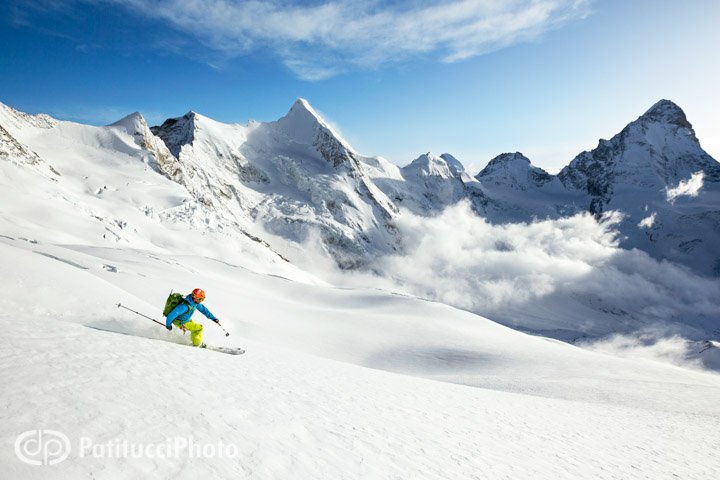 The next day we rose early for the Dôme de Moming, a 3650 meter summit directly above the hut. 500 meters was gained on skis before strapping them on the packs and climbing a rock ridge for the last 350 meters to the summit. Some days unfold spectacularly, this was one of them. Conditions were warm, not a breath of air stirred, and the landscape we found ourselves in was a continual distraction to stop and stare. So massive were the surrounding peaks and tumbling glaciers that it seemed we were in the Himalaya, not the Alps. Yet fondue was available in the hut. Of course. 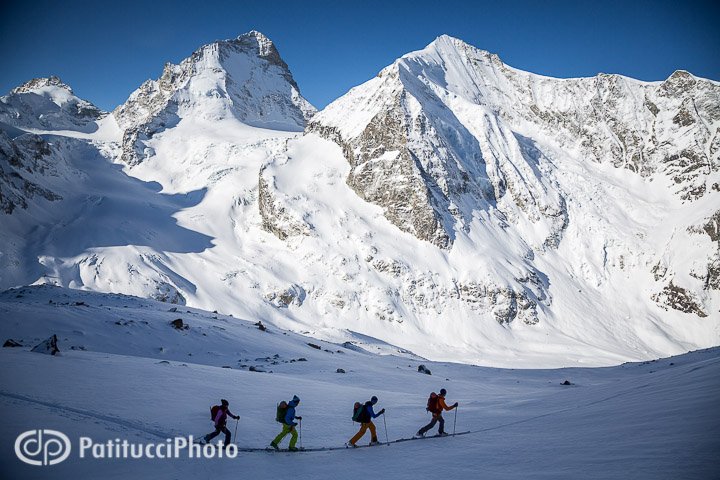 Our team headed for the Dôme de Moming with the Dent Blanche and Grand Cornier behind. 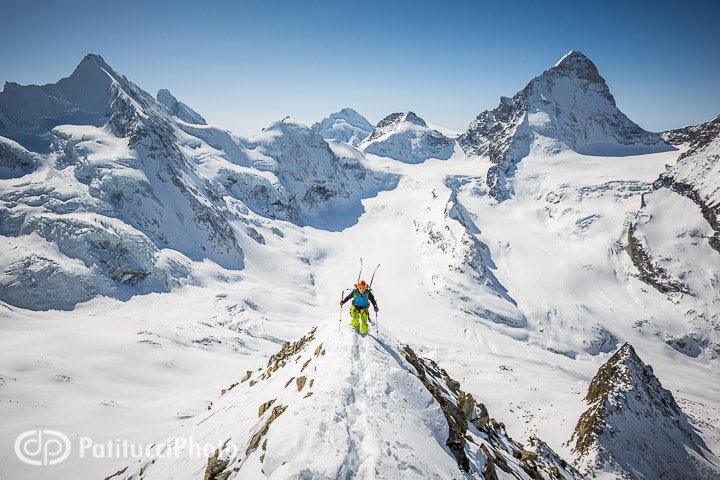 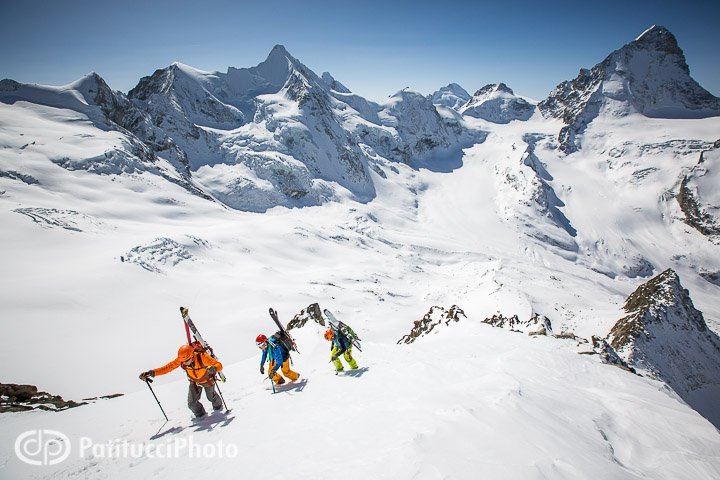 Simon Duverney, Mathis Dumas and Robert Eberli on the Dôme de Moming with views of the Obergabelhorn, Dent d’Herens, and Dent Blanche.

After several hours on the up, we topped out to an equally spectacular view on the other side, and here we spied our 2000 meter descent. “Oh Merd”, proclaimed the French. “Scheisse”, muttered the Swiss. “Yes!!!”, cried the American. A skiers dream was below. As far as we could see, untracked snow, down, down, down. Powder is powder in most all languages. 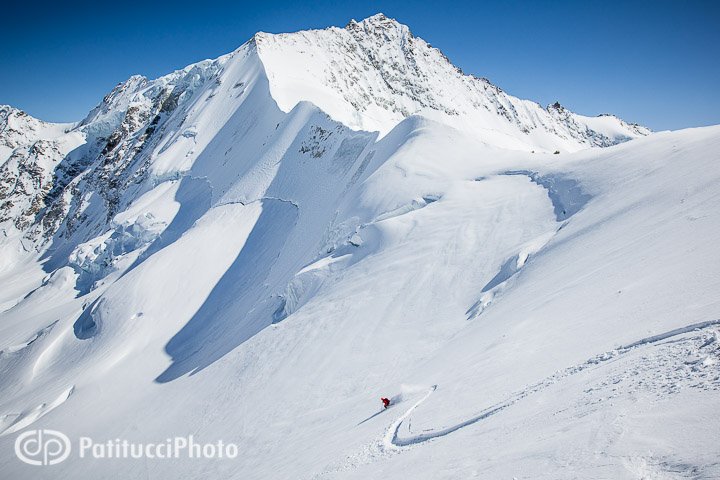 Simon starting down the massiveness that was our descent of the Glacier de Moming. 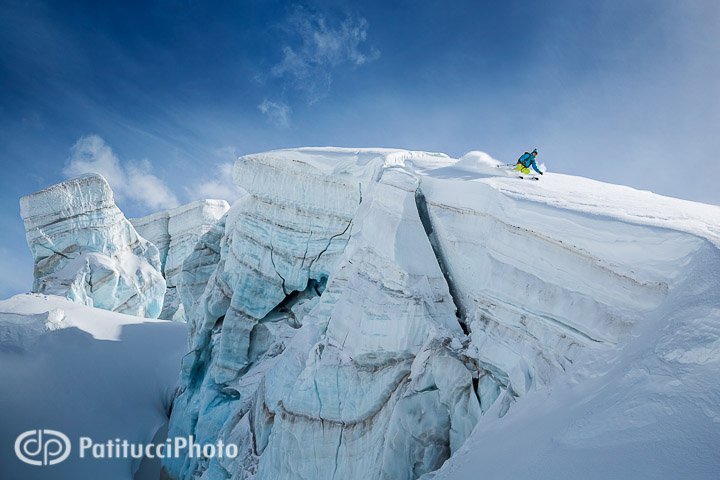 Robert Eberli pushing his turns a little close to the edge.

One quarter of the way down and Janine is already summing it all up.

A huge thanks to Outdoor Research and Osprey Packs for making this trip happen. Also, without great people, these things are not possible. Thank you Simon Duverney, Mathis Dumas and Robert Eberli. Let’s do it all over again as soon as possible. 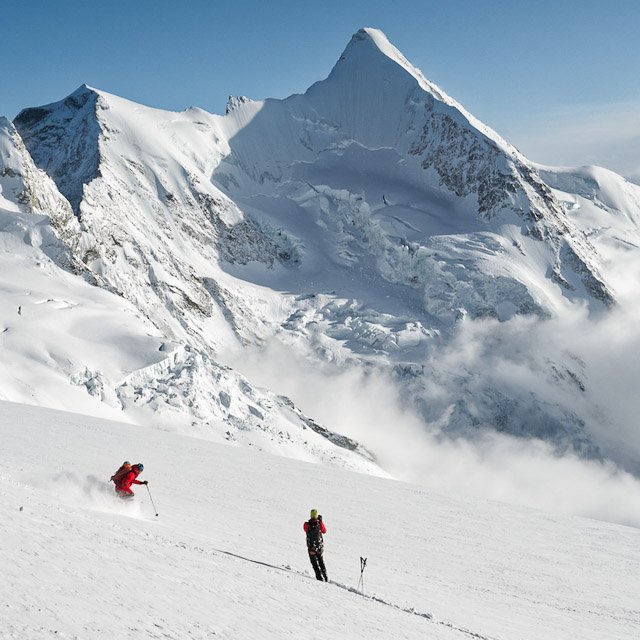 Thanks to Mathis Dumas for the photo of me at work!