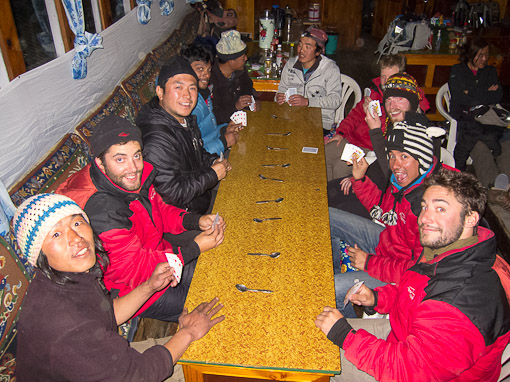 The contestants minus myself and one clever monk

The Monk’s eyes went wild as I lunged across the table and tackled him. This peaceful man’s hands, unaccustomed to combat, fought my own in a desperate attempt to keep me away. Moments before he’d been sitting alone quietly on the other side of the room, no one took him seriously when he asked to sit in for a game. Turns out this monk was like Cool Hand Luke, he played a good hand and was quick on the draw. When the cards fell we reached for the silver. I’d won the last game and was maybe feeling a little cocky. Suddenly I was facing down a monk and he was in better position, he beat me on the table top. I had to do what was necessary.

“To hell with compassion”, I thought to myself, “Give me that damned spoon”! I tore at his robes as we went mano a mano.

The Australians, who’d taught us this game, roared with delight at the site of a white guy taking out the Buddhist monk. But we had all been warned ahead of time that a game of spoons can get rough, and so it did. No one was laughing harder than the monk himself as his attachment to the spoon proved mightier than my own. I was eliminated while the guy in the orange robe advanced to the next round.