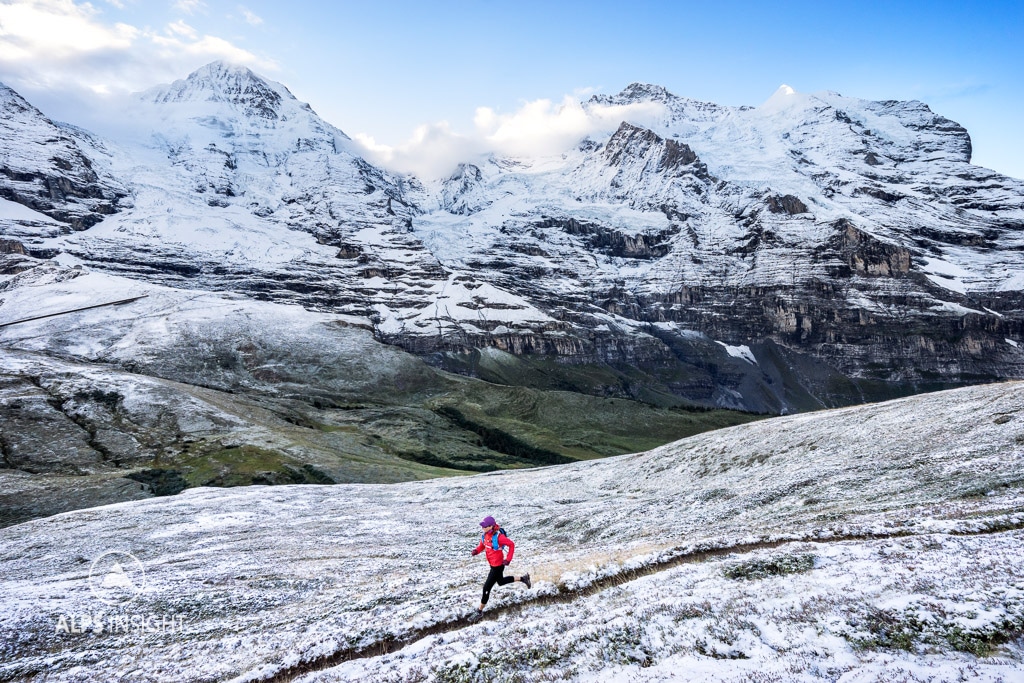 Real days out in the mountains, and the need for real weight saving without compromising quality. Sony a7II.

For years I’ve dreamt of having a simple, compact camera I barely notice. One that can make professional quality images, be fast enough for action, and be designed in such a way to allow me to be creative. The combo was tough, especially regarding speed. In 2013, we took notice of Sony’s RX100, it seemed the first point and shoot from which we could have faith in the images.

By accident, we were forced to use the RX100 for work when we ran Switzerland’s Hardergrat for the first time. Friends had said the trail was beautiful, but it was also long, 27km with 3000 meters of gain. So as to stay light, we opted for the RX100 as our only camera. Then, high on the ridge at sunrise, we found ourselves in a stunning setting cursing our decision to not bring a Canon DSLR along. With no option, we snapped away with that little point and shoot, documenting our day, and shooting on the fly. It was super liberating to move so quickly without the many inconveniences of a pro DSLR.

When we got home we processed the images and suddenly realized just how good the quality is of this little camera. They were great, our day was saved. We captioned and keyworded them, placed them in Stock and thought we’d see how it goes. Those images have since been everywhere, including numerous magazine covers and two page spreads, even a two meter wide tradeshow display. They looked perfect.

The Hardergrat, shot with a RX100 during our early days of discovering the Sony potential

Fast forward one year to the arrival of the Sony a6000. Here was a camera only slightly larger, with an even better quality sensor, interchangeable lenses, and capable of shooting 14 frames/second. We took it for a spin and were blown away. Razor sharp action images, files ready for most any use.

During this period, we were beginning to question Canon’s focusing system. Both our 5d Mark III’s and 1d Mark IV’s were now being compared to these little Sony cameras, and Sony was the clear winner for the ability to nail focus. At the same time, after 16 years working as pros, our own style was very clear to us. We work simply, we use little gear, and we do huge, and very real, days in the mountains. Why not move to the Sony system for a lot of our work? But I bet like so many other photographers, it was all a little odd to really commit to. We’re pros, we’re supposed to shoot a big DSLR, right?

Wrong! Social media gave me the bump I needed. Over the course of a couple of weeks, I noticed several leading pros in the outdoor industry offering all their Nikon or Canon gear for sale. The question was asked, “Why?”. “I switched to Sony.” As more did it, the question changed from, “Why”, to, “You too?” – “Yes”.

I pedaled my bike over to our local camera store in Interlaken to take a look at the Sony a7, the camera everyone was making the switch to. I told Janine I was just going to have a look. I came home with an a7II and 16-35 f4 lens. Now, two months later, we have several lenses and thousands of images in our database made from this camera. We already have several major magazine covers, a huge store display, and countless two page spreads. 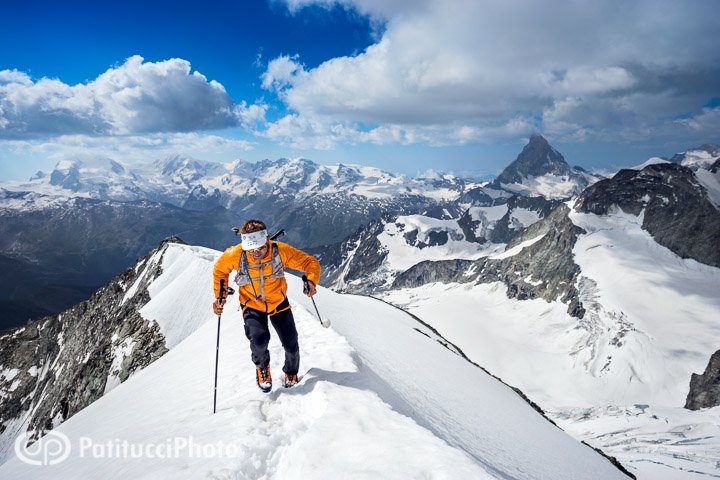 If ever there is a time to not be weighed down with camera gear, it’s with Ueli Steck. I was involved with his 82 Summits project this year, and together we climbed the Zinalrothorn. We moved fast and made very real images. The a7II & 16-35 f4 combo was the ideal set up, super light with accurate, on the fly focusing I could count on.

It’s not just about the size & weight, it’s primarily about the image quality, and especially the focus. With the Canon 5d Mark III, I was comfortable shooting up to 1250 ISO, with the Sony, 2000 has proven my limit. The focusing system crushes Canon’s. I can track a runner flying by me by just relying on the camera’s auto focus, it simply works, low light, back lit, front lit – everything. One day Janine and I had to shoot a climbing scene. The best spot to shoot was obvious, so we saw it as an opportunity to compare the cameras, elbow to elbow. Janine with the 5d, me with the a7. The same ISO, same framing, literally the same time – the clear winner was the Sony. The tones were deeper, the image sharper, the edges cleaner, and with much less chromatic aberration. 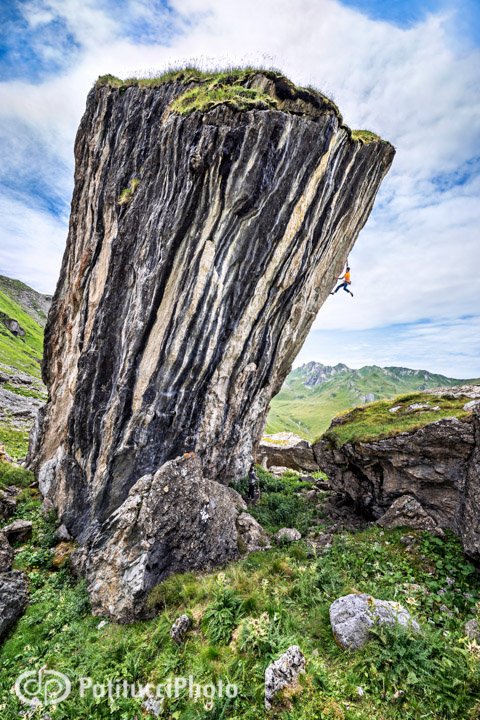 Janine and I shot this scene side by side, she with the Canon, me the Sony – this was made with the Sony, a sharper file with better tones.

So, the summer was spent shifting away from Canon and 100% in to the Sony system. It’s proven itself in almost every way, but, the real test is still to come. We are going to Nepal, and a high, cold project in the Himalaya. So not all is perfect with the Sony mirrorless systems. The issues we have with the a7 are very serious and are what everyone using it is bringing up. The battery life is a fraction of Canon’s, and the buttons on the camera are impossible to use with gloves on. The batteries are the most serious issue – the other day, at 1° celsius, my battery went from 55% to zero and not working in just 60 frames. Once back inside, it came to life at 30%, but I had a non-functioning camera when I needed to work. And that’s not even cold. 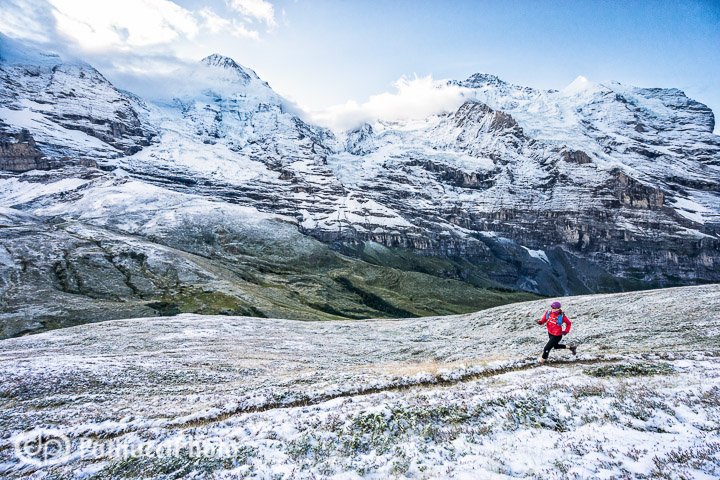 In Nepal, we’ll have both the Sony and Canon systems. We cannot rely on Sony in the cold. For charging, we’ll use Goal Zero solar systems. After four trips to the Himalaya, they have proven invaluable for all the many things we have to charge to work in the mountains. This year they’ll also be put to the test in order to shoot the Sony, we need daily top offs on all our batteries. I’ll follow up here later this fall with the news.

To summarize, and we are in no way affiliated with Sony or being asked to do this post, the system is fantastic, and I would buy another a7 right now if needed. But their batteries are a joke, and whoever designed their buttons and camera back must have been tiny and never forced to work quickly – it’s a terrible interface (did quality control really sign off on those buttons and dials?). I can live with these things for the bulk of our shooting thanks to the image quality being so good, and of course I love light and small gear. 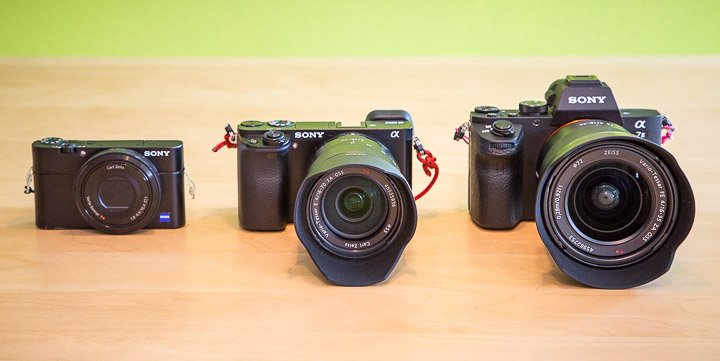 In the end, you to have see for yourself if Sony is right for you. If I weren’t a pro photographer, and had to own just one camera, the a7II really is perfect for most everything. But, for getting to know the system, the a6000 is not far behind, and the perfect way to get to know how it all works.

Have you also switched to Sony from Nikon or Canon? I’d like to hear your thoughts, in fact, everyone would probably like to hear more thoughts – please take a moment to leave them in the comments here. Thanks.

* June 8, 2016 – After continued use of the Sony system, we happily discovered that batteries seem to get somewhat better with age and charging. The increase is difficult to quantify, but after a recent trip to the Tibet Himalaya, and a lot of shooting at well below zero, we experienced far fewer issues with the batteries draining quickly. Also, we purchased two Baxxtar Razer batteries and found them to be better than Sony batteries. This is purely subjective, but these batteries seemed to last longer in all conditions.