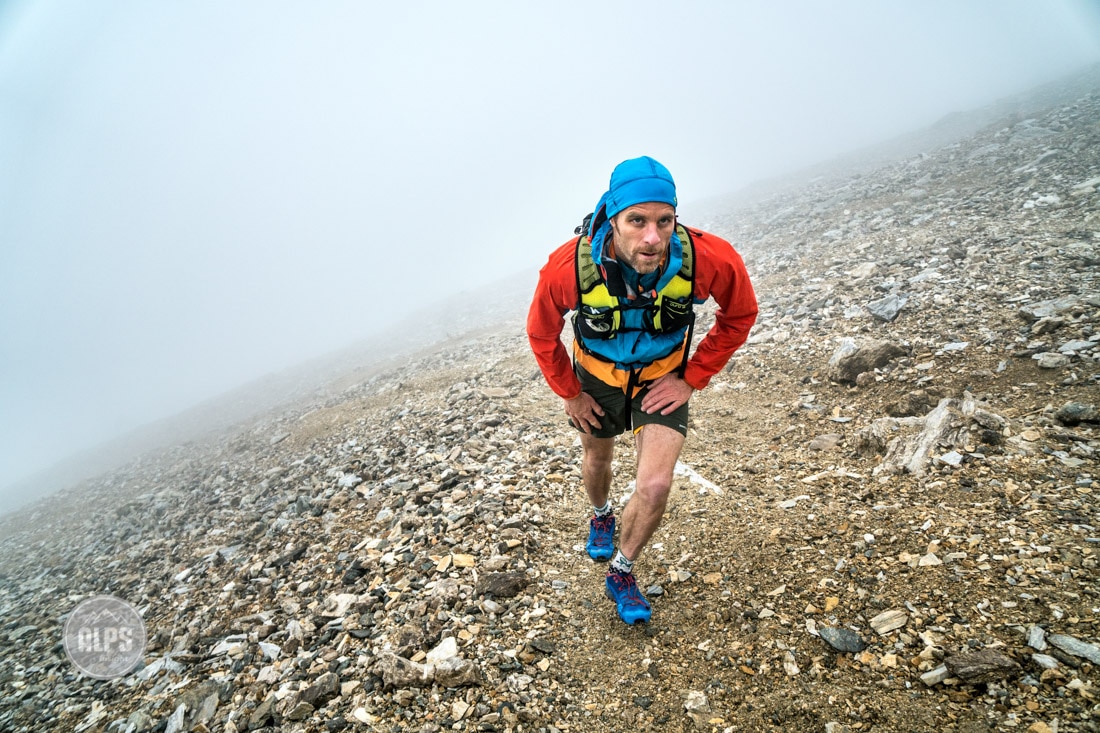 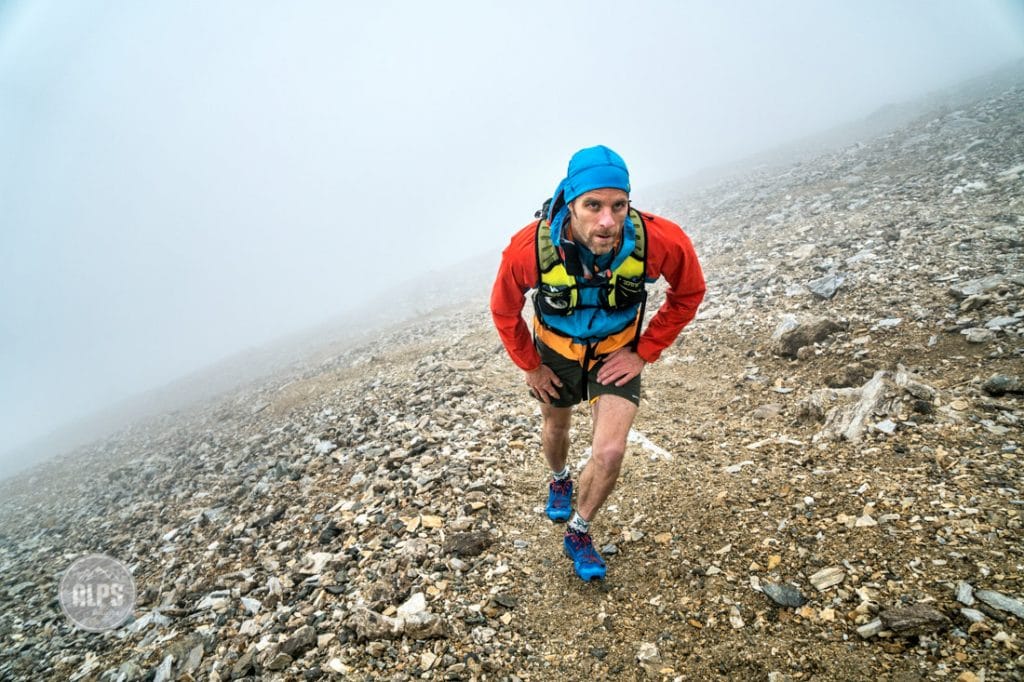 Whatever you do, Don’t Look Up

Going light and coping with big vert in the Alps

Forty miles into Ultra-Trail du Mont-Blanc’s “little sister,” Courmayeur-Champêx-Chamonix last year, I came across a fellow runner, sprawled out on a boulder. He was immobile, eyes closed. His arms are in an odd, torqued position. It reminds me of an illustration in an EMT textbook I read years ago. Decorticate or decerebrate? I couldn’t recall the difference. “Vous êtes bien?” (“You’re okay?”) I asked. A weak, “Oui” came back. Its tone suggested anything but.

He was done. Finished. Cooked. This was not his day. And the assailant was boldly right there in plain view: the vicious, unrelenting vertical.

Run in a certain place long enough, and themes start to emerge. Here in the Alps, I’d consider cows, cheese, glaciers and really tasty tortes to be on that list. Oh—and café au lait. And impromptu cheers of “Allez-Allez” and “Hopp Hopp” from the hikers and local residents you cruise past.

And… the vertical. The Alps have lots of it. That’s kind of the point, after all—to get up high, take in the view, dance around a glacier, and shake your head at the wonder of it all.

The thing is, that vert can cause your lungs, heart and quads to explode. Sometimes all at the same time.

I’ve seen the wreckage—sometimes among some very well-known elite US runners. (Names withheld, since it would just send them right back to their sports psychologists.) I’ve also experienced it. And, after thirty or forty times (Hey, I’m a slow learner) I finally started to learn a few ways to enjoy the Alps without returning home and sobbing uncontrollably when you see the three steps up to your front door.

Trail running gear is getting lighter by the year, driven by forces like mandatory gear lists in UTMB and other major races. Multiply those ounces saved over hundreds of thousands of vertical feet over the the lifetime of the gear and… well…. That’s a lot of hard work saved. But, what to get? I’m more than a little biased, but this blog post from Dan Patitucci is pretty spot on, and will save you lots of trial and error. (Trust me, Dan knows this stuff. The only way he could run lighter, is by removing a kidney.)

You can read ad nauseum about this issue elsewhere if you’re a nerd like some of us. But, the weight you swing on your feet—or don’t swing—is hugely more impactful than the weight you carry. Go as light as you can without having your feet feel like they’ve been hit with a bag of hammers at the end of the day. 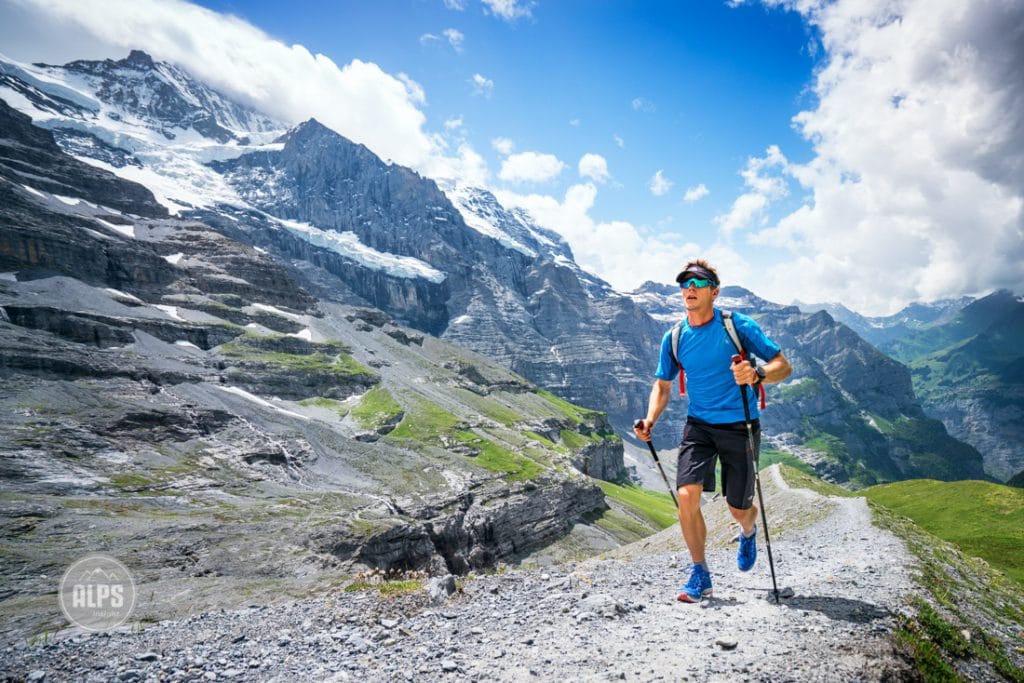 David Göttler, one of the world’s leading alpinists, training for his next Himalayan project

#3. Get light trail running poles. No, really. Get them now.

Whenever I meet with Run the Alps clients, this topic comes up quickly. Let me tell you a cautionary tale. Years ago, on the night before I ran my first vertical kilometer in a small village in the Swiss Alps, I had a conversation in French that went something like this:

Me: Excuse me, you appear to be a sporty looking man. Are you running the race tomorrow?

Thin, sporty French guy: I am! It will be fun but challenging.

Me: Are you employing the usage of poles?

Thin, strong French guy: [Silently reassesses me for a few long seconds.] If you do not use poles, you will die.

Me: Excuse me as I go to my room to get my poles, because I do not wish to die.

Pro tip: Go light here. Heavy poles are for recreational alpine skiers, not trail runners. Skip adjustable poles, which just add weight. I like the Black Diamond poles, which are the lightest ones going, and easy to stow on the fly. 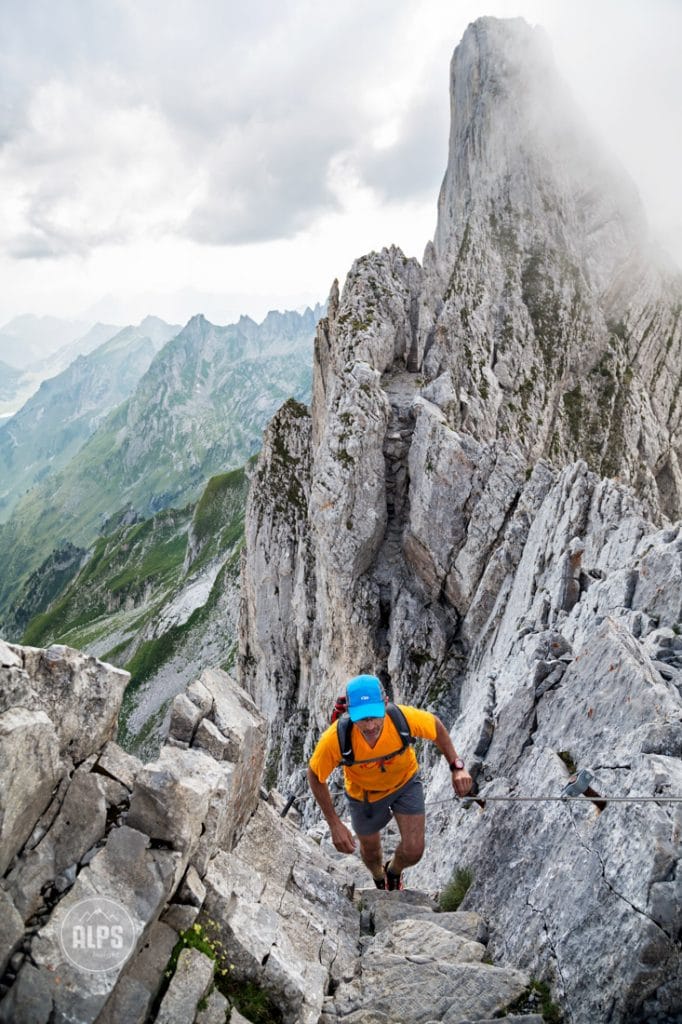 Not a high voltage power cable, but one of the ones that can take you up the mountain. You will never finish a run in the Alps and find yourself asking, “Gee, I wish there was more climbing.” Take advantage of the uphill contrivances like trams, gondolas, cog railways and funiculars that dot the Alps, to speed you past the first climb. Save your calories for the fun vert– run past herds of cows with their bells clanging or alongside a glacier, instead of up through the forest. (Not to bash forests, but if you have to choose, which would you rather run through?) 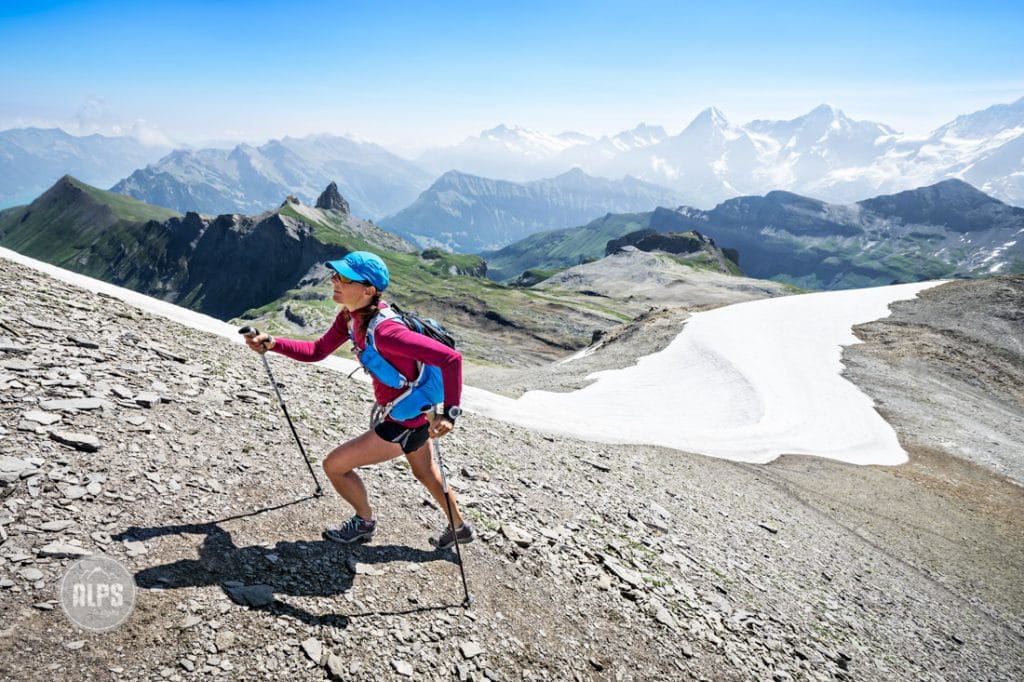 It’s steep! Save some juice by power hiking. Compared to running, your speed won’t be so much less but your heart rate will be much lower.

It only took me two decades to learn that it makes much more sense to powerhike the steeps, and save your energy for later in the day. You can keep up very nearly the same pace as a slow trail run, without burning through your energy stores. Added bonus: If it’s a warm day, you’ll reach the col or summit without looking like you just stepped out of a swimming pool.

Notice anything about every single photo of Kilian Jornet you’ve ever seen of him? He’s wearing a singlet. The less you sweat, the less you have to worry about replacing water and electrolytes. In July and August, the Alps can have their warm days—plan for a few hot hours, and it’ll pay off. And, when Emilie Forsberg shows up to give you a bear hug, you won’t stink. Too much.

#7. Ask your more fit friend to tell a long story.

Of course, this is a time-tested practice, applicable well beyond the Alps, but it works here, too. I actually learned this tip from noted ultra runner the Dalai Lama, who said, “When you are talking, you are only repeating what you know. But if you listen, you may learn something new.” (If this fails, put a rock in his vest when he’s distracted. It worked for me when running with his holiness. He’s a playful fellow, so he took it in stride. Of course, I’m now going to come back as banana slug.)

Pro-tip: Be specific. Don’t ask, “Tell me about your childhood,” or you’ll get busted. And be interested.

Between the jagged peaks, the herds of animals, the self-serve cheese fridges, and the high mountain huts, it’s exciting trail running in the Alps. But, pace yourself and allow for recovery time. Don’t find yourself with dreaded “dead legs”– your brains doing their best Captain Kirk impression (“Scotty, we need more power!”)  and the answer keeps coming back the same: “Capt’n, I’m giving her all she’s got!”

The Alps are filled with cool little villages—and some big towns—that have natural hot springs. Take a day off, and head to Leukerbad, for example, where you will discover that there really are thirty different kinds of jets, and ten different types of water in which you can soak. It’s okay to feel like a spa snob. Unlike almost everyone else there, you’ve earned it. 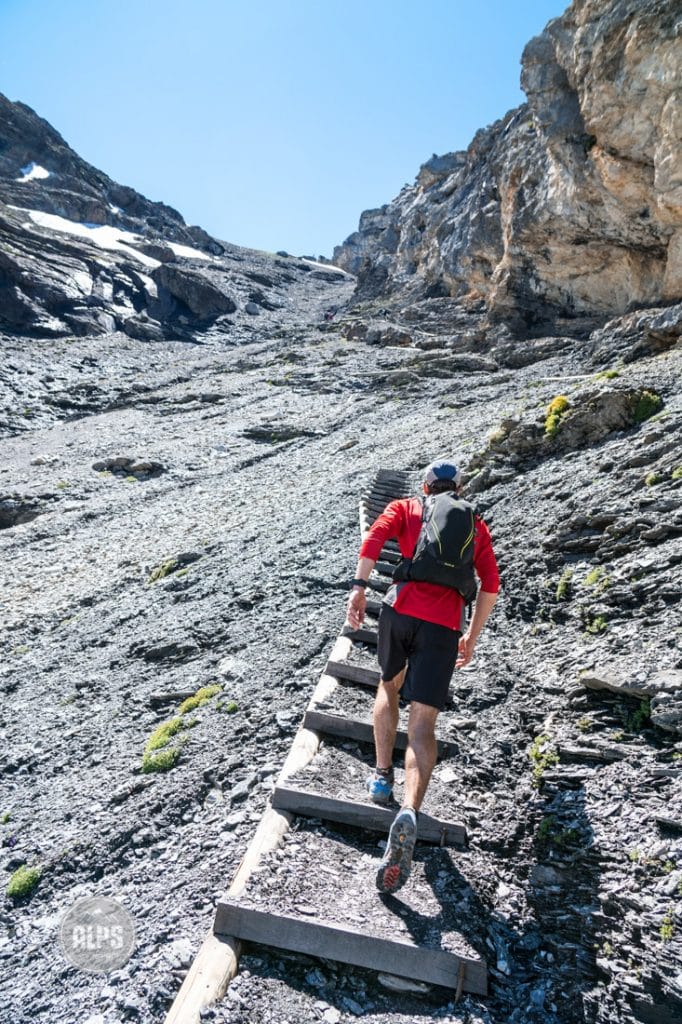 1000 meters of straight up can be daunting, especially when you might have multiple in one day.

Running in trail race through the Alps one fall, I reached the big climb on the course—nearly 1,500 meters. The helpful Swiss alongside whom I was running had been explaining the course for the last half hour. Col Jorat looming, he warned me, “Whatever you do, don’t look up.”

I held out for ten minutes, then tempted fate. I can’t repeat what I said, but I can say he told me, “Didn’t I tell you not to look up?” The good news? It’s never really as bad as it seems. An hour and a half of power hiking, and we were at our high point on the course. Sweat dripping into my eyes, I swear I saw the Lunar Roving Vehicle left by Apollo 17.

Doug is the founder and Chief Executive Runner at Run the Alps. He’s also a Contributing Editor of Trail Runner Magazine and sadly lives only part time in Chamonix, where he is frequently seen ascending the steps to the second floor of Snell Sports with his poles.