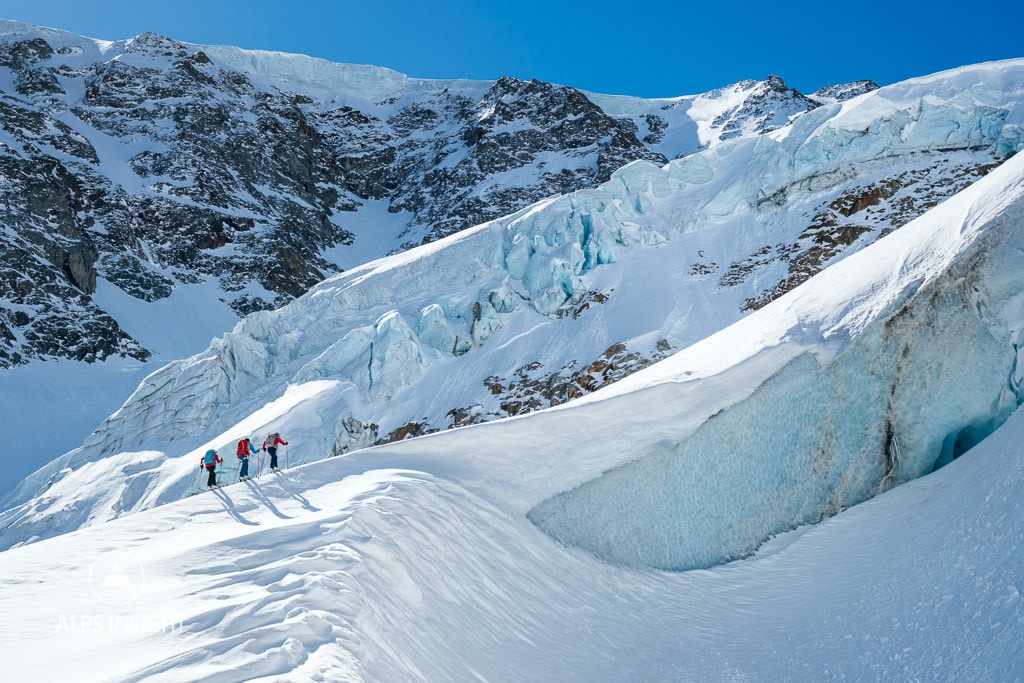 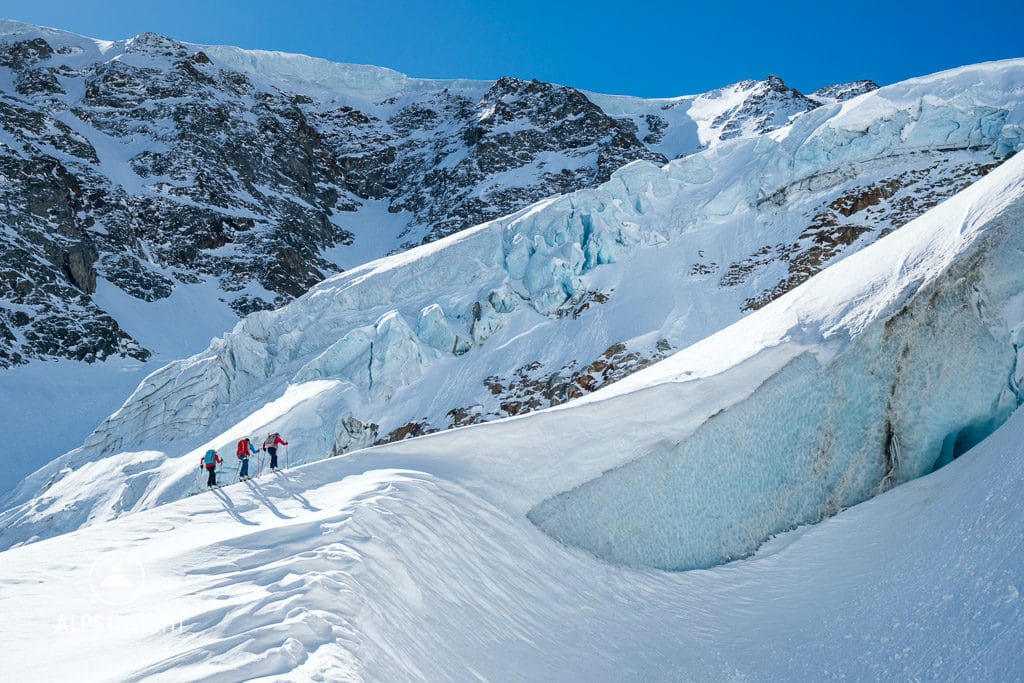 Foreigners in Switzerland often have a similar observation. It’s a feeling of doing things wrong according to the Swiss. Dealing with recycling on a Sunday, peeing standing up, or wearing sweat pants in public come to mind. Atrocities.

In my case, I admit, I regularly get the “that’s not how we do it here” Swiss finger wag due to my “Auslander” ways. And, I love it.
It’s possible that even here I’m about to get into trouble because high on a col last spring I was told not to share just how good the Berner Haute Route is with the world. This, from a lone 60-something-year-old Swiss woman, who was topless at the time as she switched from sweaty to dry shirts. There, above the Gärstengletscher, our paths merged, and while de-skinning, she asked what our group of Auslanders was doing in a place where only locals usually tread.
After some pleasantries, I fessed up, “We”re doing a story on the Berner Haute Route for a German Ski Touring magazine.”
She looked me stern in the eye, “Don’t tell anyone!” Apparently, I’m telling.
I may be in trouble with her, but I know for a fact that four Swiss hut keepers and a whole lot of skiers will be very happy. So, here you go.

The Haute Route, the famous Chamonix to Zermatt tour, is on top of most every ski tourers life list. And, for good reason. It passes through some of the Alps most dramatic terrain, follows glaciers, climbs cols to access massive descents, and finishes with a 2000 meter drop beneath the Matterhorn.
It’s fantastic. And, it’s swarming with skiers.
While you should absolutely keep the Haute Route on your life list, you might also consider another Haute Route. It’s quiet, feels wild, has better huts, equally good ski terrain, and can be done without the stress of having to get from Chamonix to Zermatt in a tight time period. It’s the Berner Haute Route, starting on the Susten Pass and finishing in Rosenlaui. Where?

While Susten to Rosenlaui isn’t exactly Chamonix to Zermatt, those in the know know that this region in the central Swiss Alps is home to some incredible big mountain terrain. Having heard about it for so long, and it being right in our backyard, we finally gave it a go in the Spring of 2018. We spent five days on the tour and had weather more commonly found in Mallorca than in the Swiss Alps. Each day required an early start to beat the heat, and a nap each afternoon to escape it. The days are as long as you want to make them since there are plenty of side peaks to add to your agenda. Or, if you stick to the hut to hut route, you’ll still do plenty of skiing.

The grand finale of the multi-day tour starts at the Gauli Hut. The hut is famous as a spring ski basecamp for many big peaks, and worthy of several days all on its own. It’s also the scene of legendary heroism played out near the end of WWII. Just above the hut, in November 1946, an American plane loaded with VIPs augured into the Gauli Glacier. While no one was killed, they were in for a cold visit to the region. The story goes that the Americans wanted to drive tanks in for the rescue. The Swiss, after what surely must have been the mother of all finger wags, knocked some sense into the situation by proving that it was not terrain to simply go 4-wheeling. Instead, Swiss soldiers managed to ski in, stay focused on the rescue and not on all the big ski lines, and get the job done. Today, the bent propeller still sits above the hut and the glacier regularly spits out pieces of the story, many of which are on display at the hut.
Now, experienced mountain people get a different experience.

For the final day of the Berner Haute Route, you’ll have several optional peaks to climb and ski from, all of which funnel into the memorable Rosenlauigletscher. A beautiful, seemingly made for skiing exit to Rosenlaui directly beneath the Wellhorn and Gstellihorn.
And it’s there, in Rosenlaui, where you’ll see just how different the Berner Haute Route is from the Haute Route. It all ends on the side of a road, no town, no restaurants. Just a lonely walk to the bus stop and a long bus ride to begin the journey back to where you left your car.

The Berner Haute Route requires logistical info, and it’s all on our Classic Page. 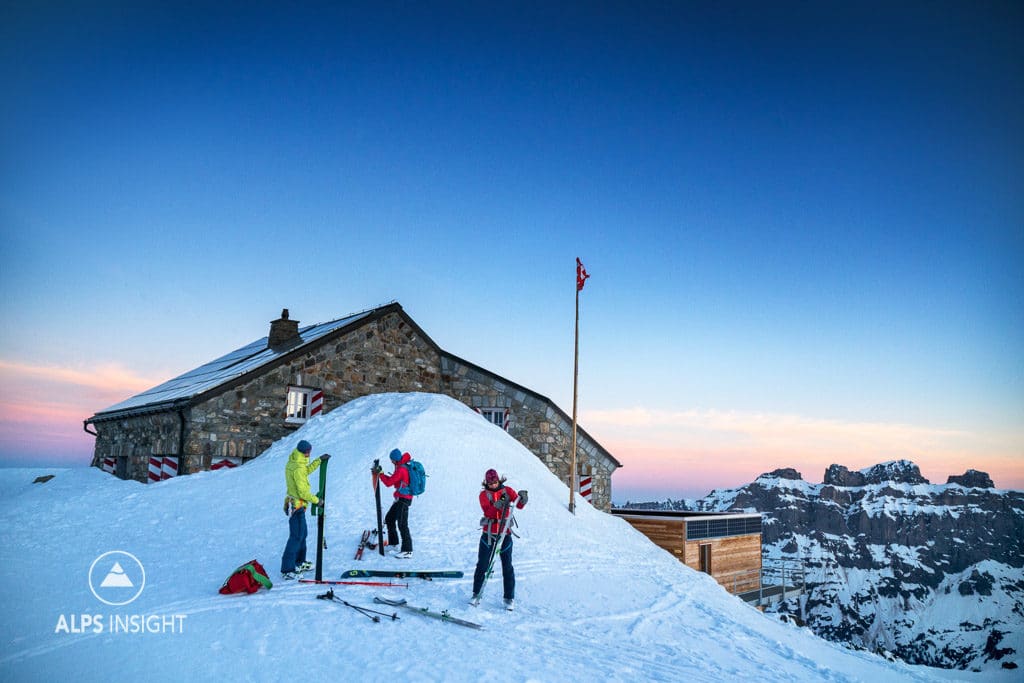 Getting into the morning routine at the Tierbergli Hut. Up early, skins on, off we go. 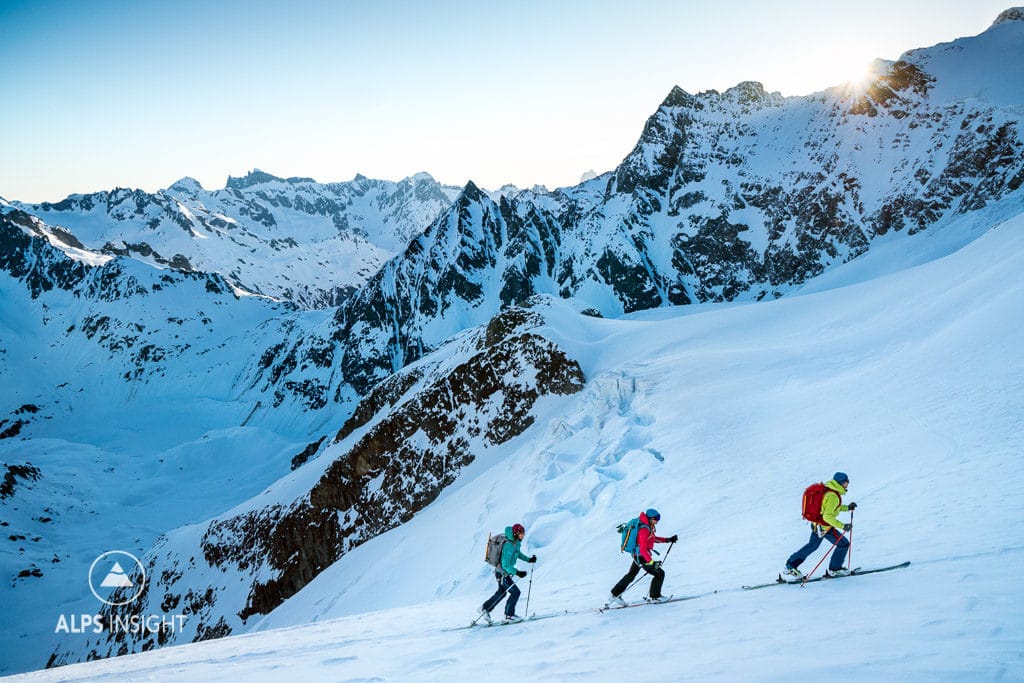 Leaving the Tierbergli Hut for the Trift Hut 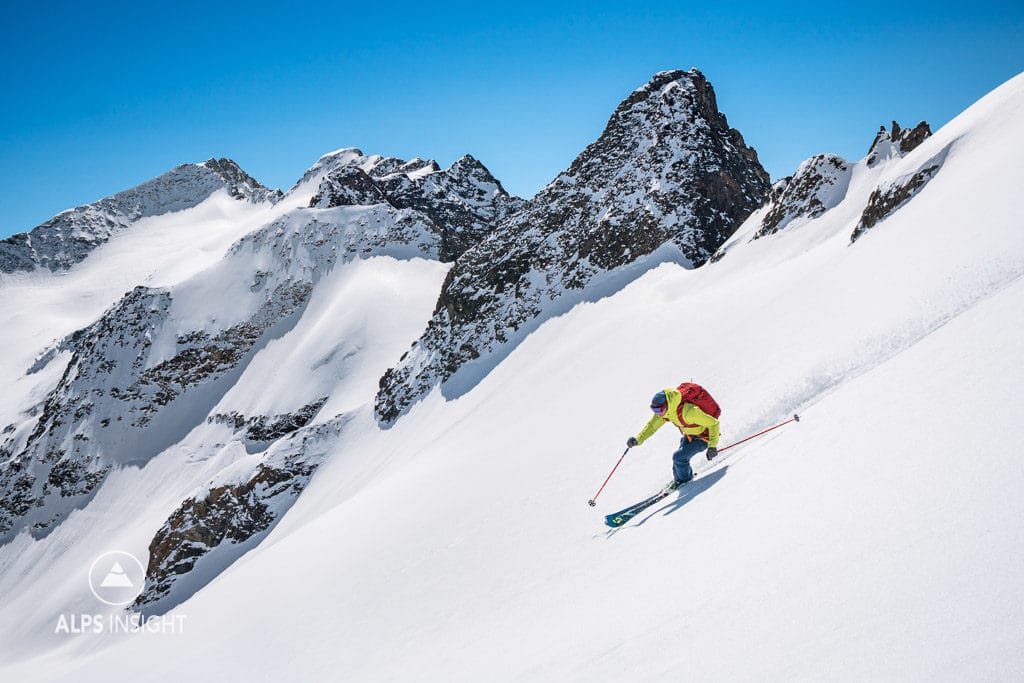 Skiing the Steinhüshoren en route to the Trift Hut. 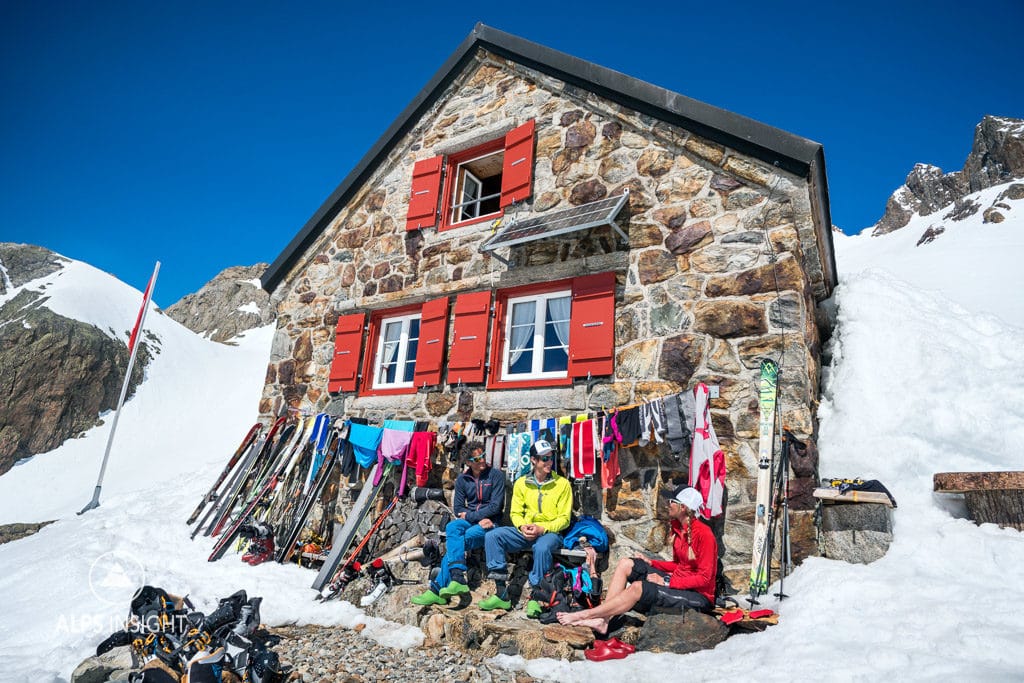 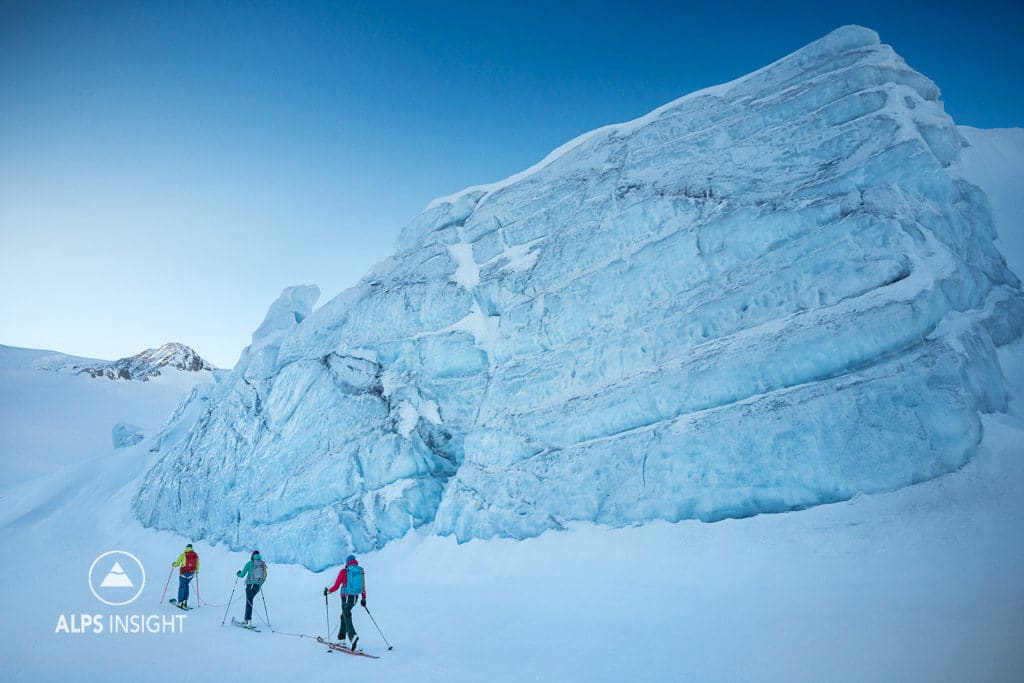 Passing seracs on the Trift Glacier. 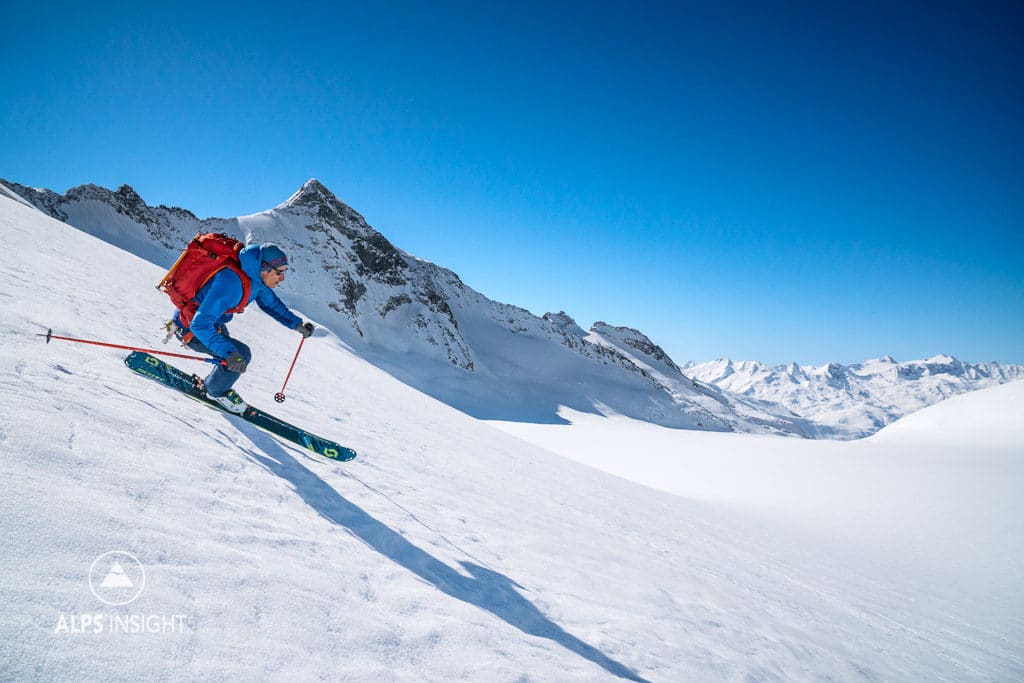 Skiing in the wide open landscape of the Rhone Glacier. 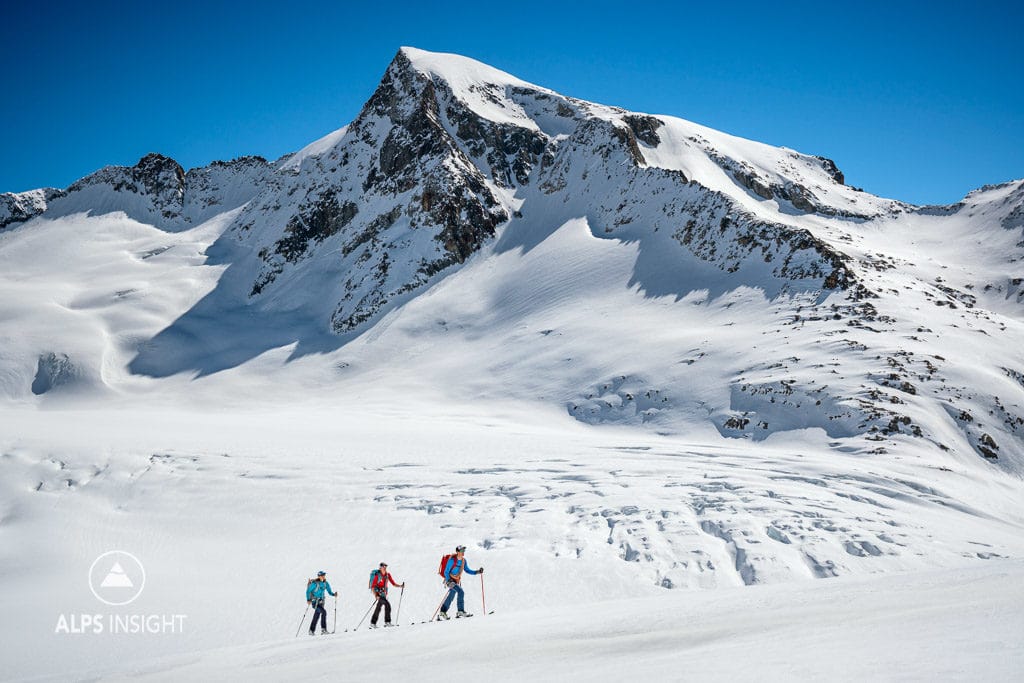 Skinning above the Rhone Glacier on the way to the Gärstenlicke 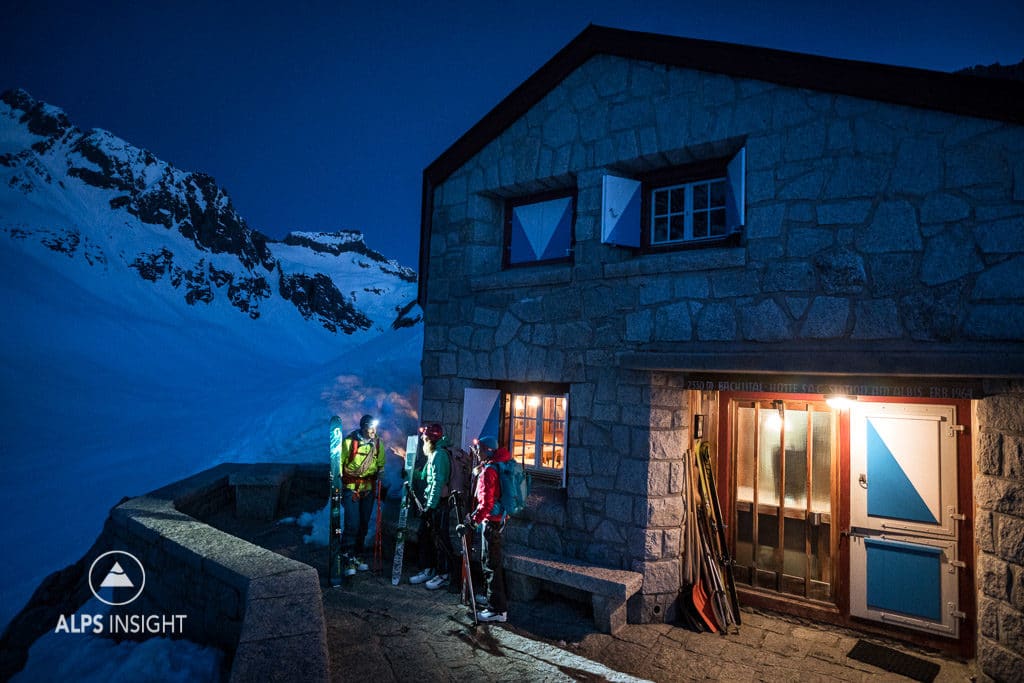 Up early at the Bächlital Hut for the big day traveling to the Gauli Hut. 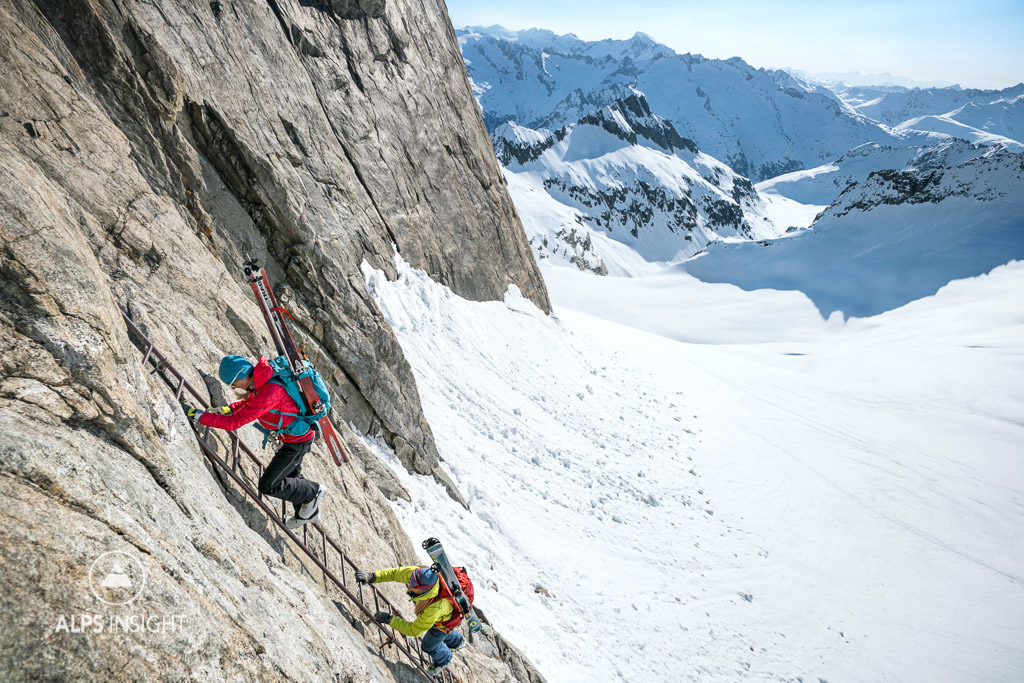 Crossing the Bächlilicken requires climbing chains and ladders to get over the pass that separates the Gauli and Bächlital Huts. 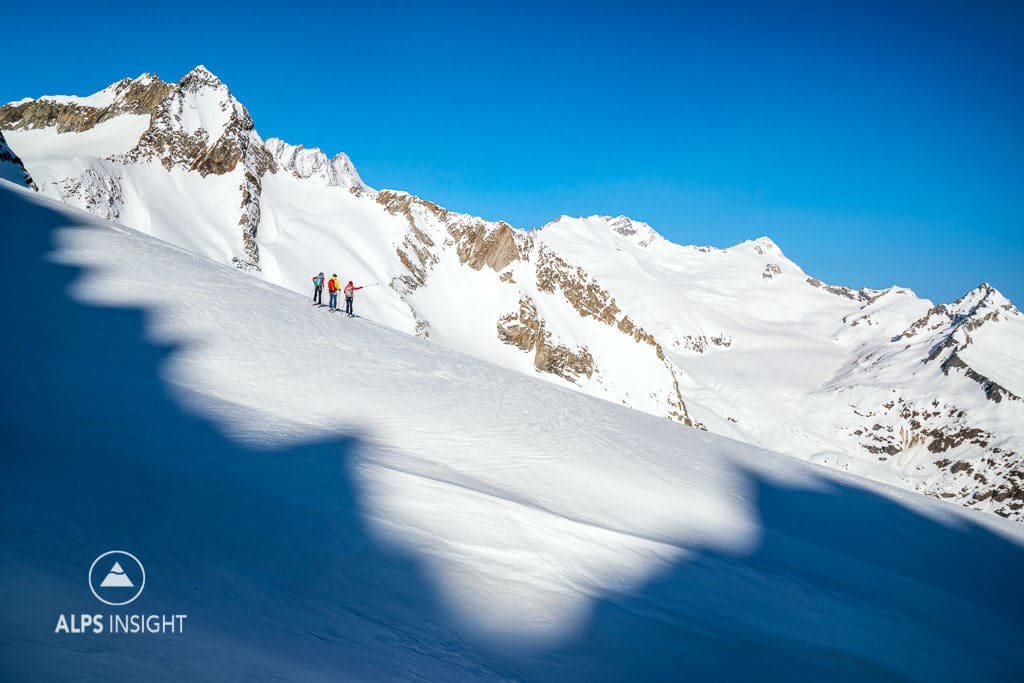 Once over the Bächlilicken, it’s all new ski terrain above the Gauli Hut. 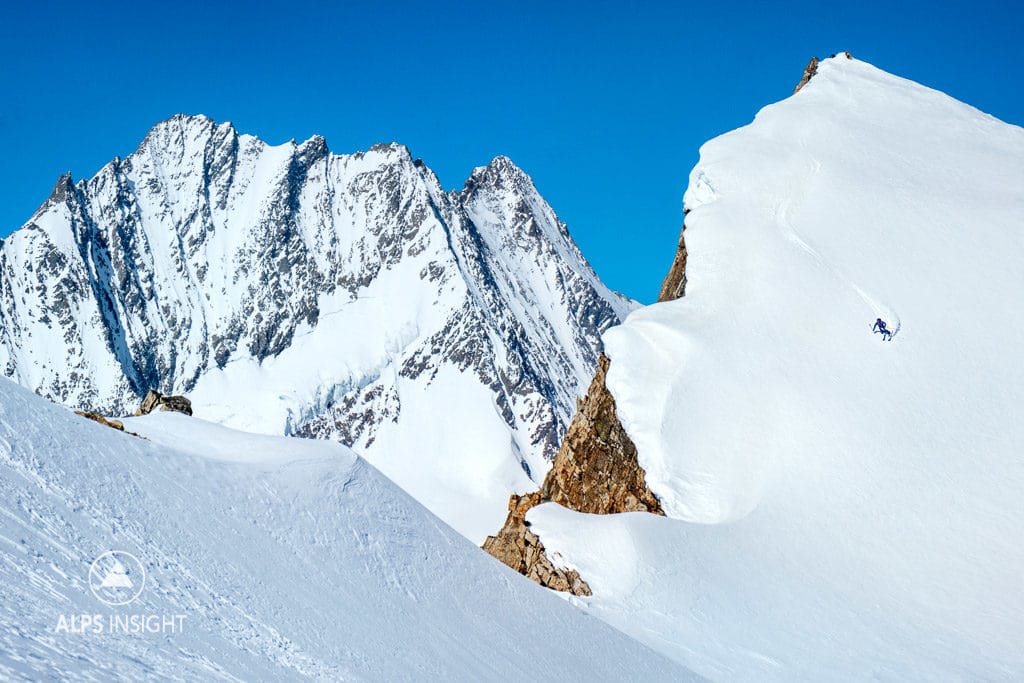 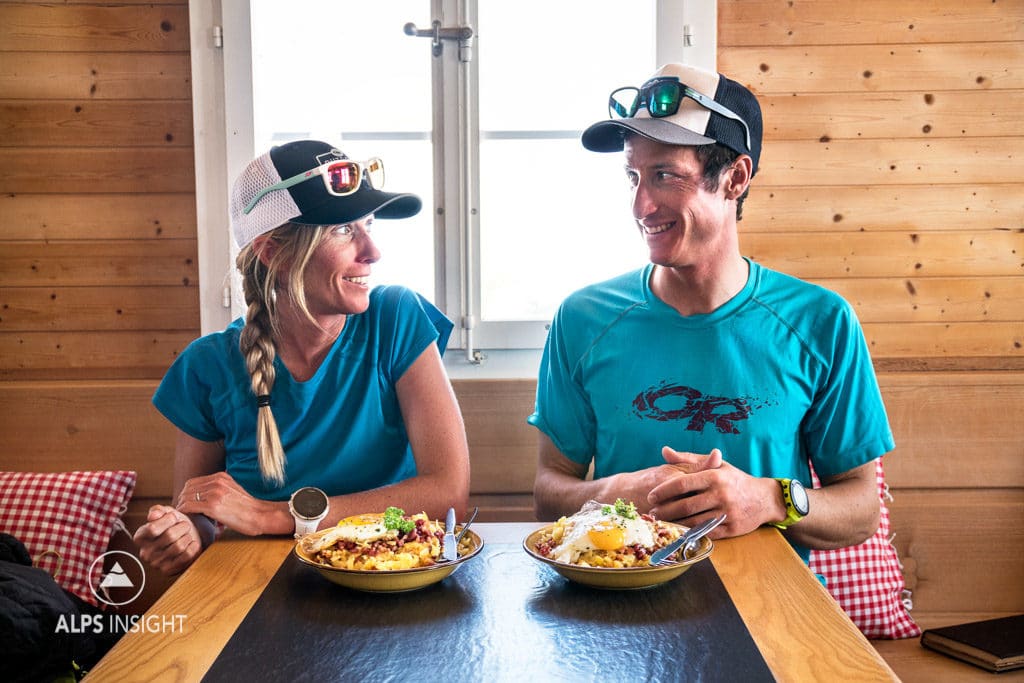 Rösti time at the Gauli Hut. 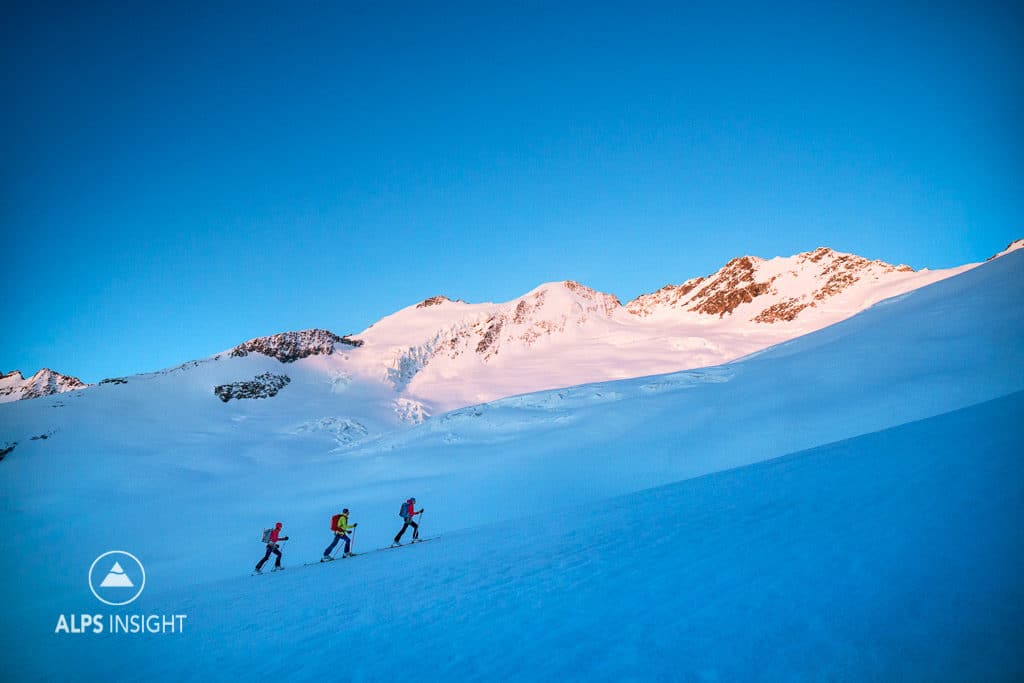 Leaving the Gauli Hut at sunrise for the descent to Rosenlaui. 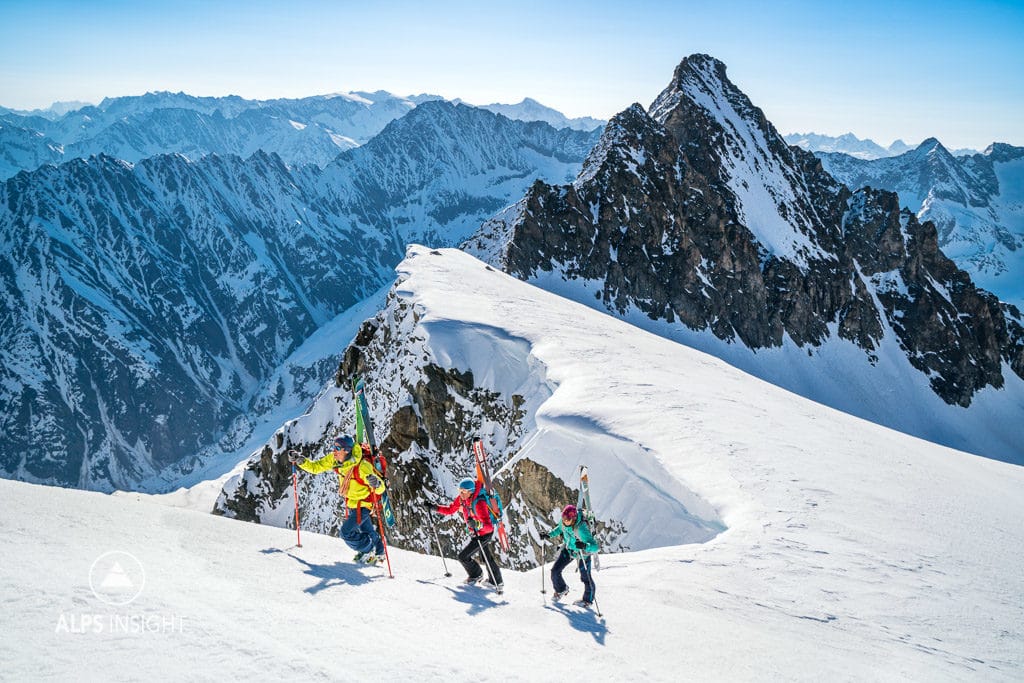 Climbing the Ränfenhorn before making the huge descent of the Rosenlaui Glacier on the last day of the Berner Haute Route. 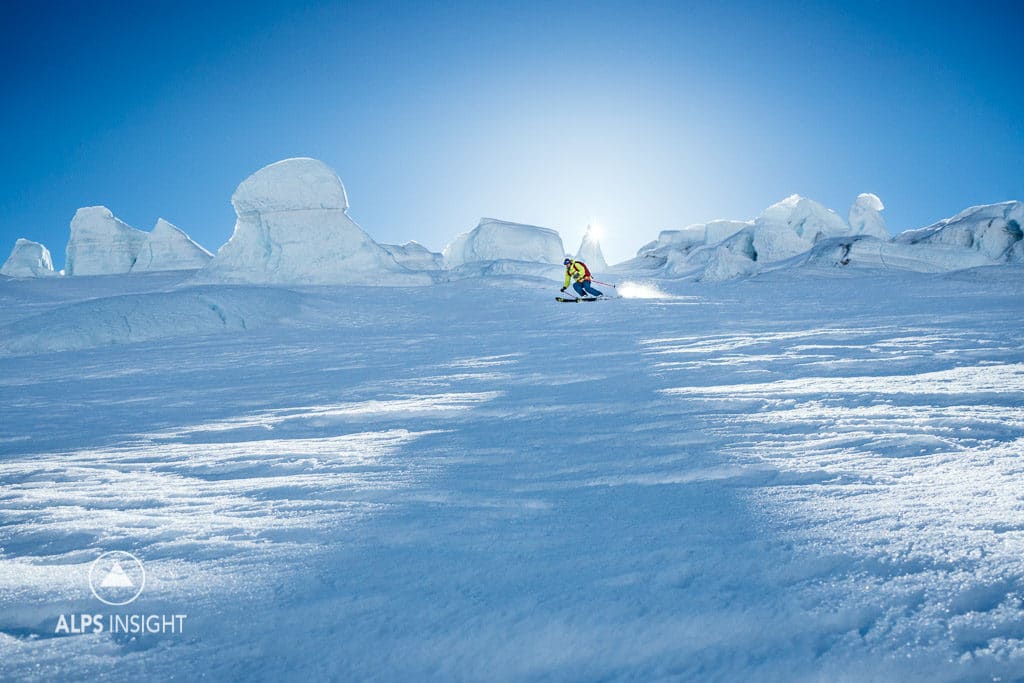 Skiing among seracs on the Rosenlaui Glacier on the last day of the Berner Haute Route.