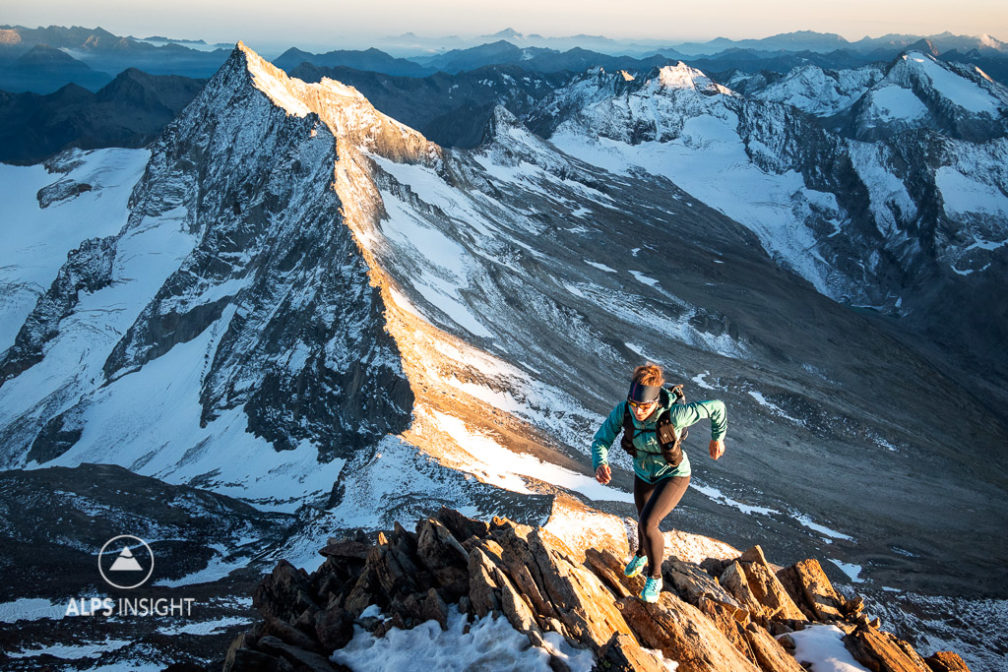 At some point, I just had to turn away and not watch. It was all too embarrassing.

We’d just run into the Jungfrau Region’s Löbhorner, an easy, although chossy, rock traverse on a limestone ridge rising above rolling grassy hills dotted with cows. The approach is a classic trail run so we pulled up with 1000+ meters already in our legs, running shoes and shorts, a super light rope, a rack of alpine draws and climbing shoes, all in 15 liter running packs. We even had helmets.

Ahead of us were two parties, a team of guys who planned to fly down after climbing, and a guide with his client. And while it was the client that pained us to watch, it was the old school mentality of the Swiss guide that I found truly appalling.

From where I sat, tied in, ready to go, the client stood next to me kicking at the first meter of the route with his enormous alpine climbing boots. No matter how hard he huffed and puffed and beat his boots against the wall, he just couldn’t get on the smears and edges to build momentum. After twenty minutes of this, we were still waiting for our turn to start. Finally, after learning all kinds of new Swiss phrases, he told us to just go ahead and pass.

When I reached the belay and a somewhat comatose mountain guide, I noticed he too was wearing alpine climbing boots. Kim and I climbed on and later, from high on the ridge, we looked down and saw the pair walking down the trail from which we’d run up. They’d called it a day after a long walk to ascend less than a meter.

Why were these two in big mountain boots on a route so easily walked to, and climbed, in running or approach shoes? Why hadn’t the guide educated the client on footwear choices? If it was a training day for bigger things and the guide wanted the client to learn to climb in boots, why didn’t they at least have back up footwear? Something tells me that a fixed, and difficult to change, mind frame is to be credited here.

This is just one example of this sort of thing. Here in the Alps, footwear seems to be a big topic of conversation. When a report in Tages Anzeiger was published about our creation of the Via Valais, the comments flowed in about how the terrain wasn’t possible in running shoes and that rescue services would bank off of all the calls for assistance. This, after we easily passed through in running shoes on nothing but perfect trails.

I don’t know how many times we’ve been on high peaks, or things like the Glacier Haute Route, in running shoes only to be reprimanded for our footwear choice. Recently, we passed a mountain hut in the afternoon while en route to a peak above. The hut keeper told us that the peak required a 5 a.m. start and that it is not possible to do after lunch. And, it certainly would not be possible in running shoes. Later that evening, as we again passed the hut, we were once more reminded that what we did simply wasn’t possible. Never mind the fact that I told her that we’d done it, added some additional ridge traversing to the day, took a zillion photos, and even relaxed in the sun.

I come from California and spent many years exploring the range, climbing peaks, traversing ridges, and trail running as far back as the early 90’s – back when it was a nameless activity. In the Sierra Nevada, most everyone wears sticky rubber approach and running shoes for everything. It’s bone dry there.

The Alps are well on their way to the same reality. While I’m also a climber and wear boots on routes where they’re needed, I much prefer doing things as light and as comfortably as possible. I don’t choose running or approach shoes for everything, I just choose them for when the route and conditions allow. In recent years, I more often seek routes which can be done in this style. Decisions about gear should be based on what is most appropriate and not because anything is, “just what you do in the mountains”. That climber on the first move of the Löbhorner had 2250 grams of rigid, zero sensitivity boot on his feet. I had 250 grams of cushion and just the right amount of sensitivity and support.

For many of these easy alpine peaks that do not require any true technical climbing, gear can be paired down to be as light as possible while still having the essentials for safe movement. Our gear choice for running in to peaks with glacier travel can be seen on our Way Up Alps Gear page.

The innovative footwear brands are introducing ultralight alpine boots that are far more comfortable while also performing in technical terrain. Look at what both Scarpa and Salomon have done with their respective Ribelle line and S/Lab XA Alpine. These designs serve as the ideal bridge between running shoe and alpine boot.

Climate Change in the Alpine Landscape

Looking into the not so distant future, the Alps will not require as much time spent on snow or glaciers. Drier conditions and more rock might be the new normal, and as such, a different approach and strategy will be necessary to continue climbing. Already, numerous classic routes are becoming more difficult to access, or even not possible, due to shrinking glaciers, rockfall, etc… but there are still so many objectives to be tried with a new way of moving.

The Alps’ tradition of walking to a hut, spending the night, then climbing & descending the next day is the classic strategy. Many do this to split up the big days with all the extra gear necessary for many objectives. But as climbers evolve, perhaps more will start to do these routes, or similar routes, lighter and in one go, with the lightest possible gear. Some might argue that the beauty of the classic strategy is for more time in the mountains, a night out in a hut, camaraderie, and to watch the sunrise.

I would argue that the strategy of doing things in a day lets you experience even more in the mountains. A strategy that I feel is also rewarding because we put all our skills to use. More and more, it’s being called “Light Alpinism”.

Finally, Light Alpinism might actually have people adjusting goals, from the big ticks, to smaller, less technical or involved routes (Have you tried our Way Ups?). While you may not climb a 4000 meter peak, you may have a dream experience on smaller objectives.

You get to do so much more with so much less.

Read what others are saying… Our Kiwi friend Alastair McDowell had an all time summer in the Alps, running Mont Blanc, the Matterhorn and so much more. He put down similar thoughts about what he calls Trailpinism.

Is your mountain environment changing? Are you moving in a new direction with your own skills? Share why and how you adapt to the mountains. We want to hear our thoughts.

If you’re interested in a truly perfect range for Light Alpinism, thanks to idyllic weather, solid granite and abundant trails and ridges, consider the California’s Sierra Nevada, where we also did a guidebook: Sierra Trail Runs : A Guide to the Eastside