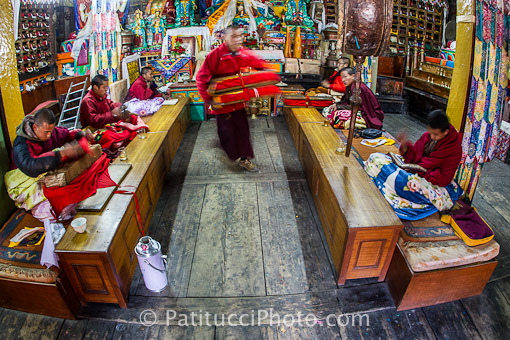 A heavy, well worn curtain hung between us and what we so badly wanted to see. From inside the monastery came the distinct, exotic sounds of Buddhist prayer, chanting and the occasional gong. Suddenly, a young monk swept the curtain aside and ran across the courtyard only to disappear, then reappear a moment later. Back he ran to the curtain where he stopped, looked toward us, smiled and gestured that it was okay to enter. Without hesitation, we followed.

Inside it was ice cold with only a couple of out of place fluorescent lights illuminating the scene before us. Six early twentysomething monks, all wrapped in various robes and blankets, sat facing each other reading from prayer books that a seventh monk rotated through the line. Upon entering, they all looked to us and smiled. Clearly, they were as amused by our presence as we were mystified by their practice. After a few minutes inside it became obvious that, while monks, they were also boys without adult supervision. 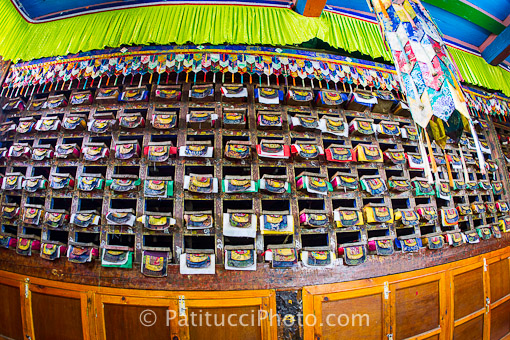 Finally one spoke up, “Dog”, he barked, pointing to his neighbor. “Goat”, he pointed at another. “Cat”, “Bird”, and so it went for each monk, they all laughed. I felt obligated to identify myself, and thanks to my long, filthy, disheveled hair the choice was obvious, “Yak” I announced. A roar of laughter confirmed I’d done well. We were in with the monks.

We continued to sit and spectate while they carried on as if we weren’t there. As a monk finished a prayer book, he would push it forward for the runner monk to gather up and either put away or pass to another. In the pause between prayer books, the monk would do as any other twenty year old on the planet would do, he’d pull out his phone and find something to stare at.

And so it all went; pray, chant, gong, phone. The longer we watched, the more it became obvious that for Dog, Goat, Cat and friends, this was business as usual. Finally, we stood, nodded thanks and waved farewell. Time to step back through the curtain. Once outside we were back where we had started, but now we had a memory where before we had so much curiosity.

Wild West Winter Trail Running Road Trip
Solo bikepacking across the Alps
Why do you ride?