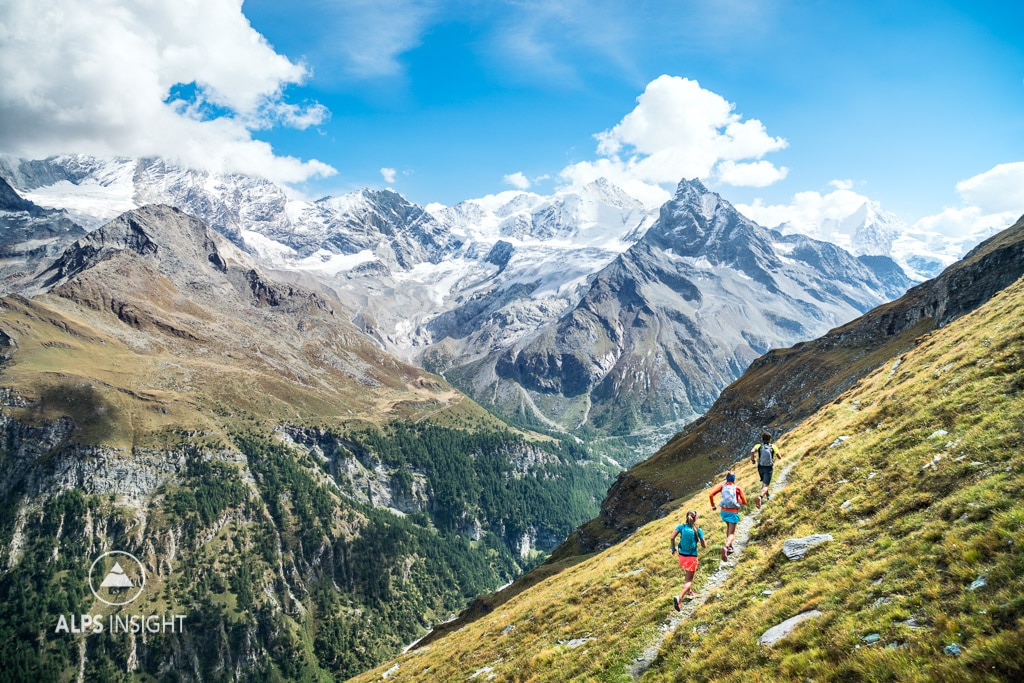 It took three weeks of exploring trails and three different routes to nail it. But, in the end, boy did we nail it! The Via Valais route is complete, but we are not going to share. For now…

In case you missed previous posts, the Via Valais is a personal, okay a dream, project by our team at ALPSinsight to create the perfect multi-day trail running tour through the Alps. After discovering so many perfect trails in Switzerland’s Valais region last year for our Run the Alps Switzerland book, we realized that if we connected them we’d have a phenomenal week-long trail running tour to Zermatt. But, where exactly it would start and how it would connect a few key points was a mystery.

Thankfully, the master trail planner, and designer of all the Run the Alps Switzerland book runs, is on our team. Enter Janine Patitucci, who, after 20 years of studying every valley of the Alps, plus all the Swiss maps she could get her eyes on, couldn’t wait to unlock the route.

The plan was to link Verbier with Zermatt, and excluding the big ups, we wanted the route to be at least 80% running. We also wanted great overnight locations, peak bagging options, bail outs, a condensed version to allow for those with less time to still do the best terrain. We had a whole list of demands. We did not want the Haute Route. While the Haute Route is a great trail, it’s a hiking route, with steep ups and steep downs, up one valley side, down the next, and so on. For trail runners, we can cover more ground, and have much lighter packs. Designing the days, we knew we could use more of the terrain and flow through the landscape on the best trails, which the Valais has in great abundance.

But it’s never so easy. While we nailed the last six days of the route, the start proved difficult to get just right. We did not want to give in to the easiest option of using the Haute Route and were not impressed by one of the huts on the route. We needed a major re-routing, but our reconnaissance missions proved frustrating. Janine tirelessly zoomed into hi-res imagery on FatMap and compared what she found with the trails we knew to be quality. We’d find a great solution until the necessary next section of trail didn’t pass quality control, and only tired our legs and battered our over-worked feet. Finally, she got it. On trails none of us had ever been on or initially considered, on trip number three, we found it, paydirt!

The Via Valais is 9 stages, 225km, and 14,000 meters of vertical. For those seeking a harder route, we have peak bagging options for each day. You’ll get your meters… And for those seeking an easier version, we have that condensed six-day route, or several stages can be broken into two days, rounding out the trip at just under two weeks.

The full Via Valais online guide is now on our Elevation : The Alps Trail & Peak Running Resource site.

Finally, we had some huge support for this project from several brands we work with, and great friends who joined us for the maiden voyage. We want to thank those that supported us, but better yet, believed in us.

Dynafit Switzerland’s chief wanted to be involved at any level because he just wanted to see the project happen. That meant a lot! And so did all the Dynafit gear all five of us lived in for the exploratory missions and push.

Osprey Packs was there for us with our favorite trail running pack for longer trips, the Duro/Dyna 15 liter packs – no one likes to carry much weight while trail running, but sometimes you have to. No pack carries weight better for running.

FatMap is a 3d image mapping service we have grown to love and rely on this year. Hi-res images with all the trail details were always available on our phones. This is Google Earth for mountain sports…

Goal Zero has been keeping us charged for five years now. While we didn’t need solar power this trip, we did rely on their batteries to power our phones, headlamps and watches. In addition to managing a business from a phone, there was a lot of map checking, image editing, and churning out of Instagram stories on the trails. The Sherpa 15 is tiny and packs a punch for your phone.

Trail Butter was along for the ride, like always! No one can get enough, and everyone is waiting for it to be in Europe!

Osmo Nutrition was probably more important than any of us even know for running through the Alps hottest ever summer – hydration was critical.

Finally, Valais Tourism! Who better to build the Via Valais with…?

If you would like to see exactly what we took, and just how little you can run with for 9 days in the Alps, visit our Via Valais trail running gear post.