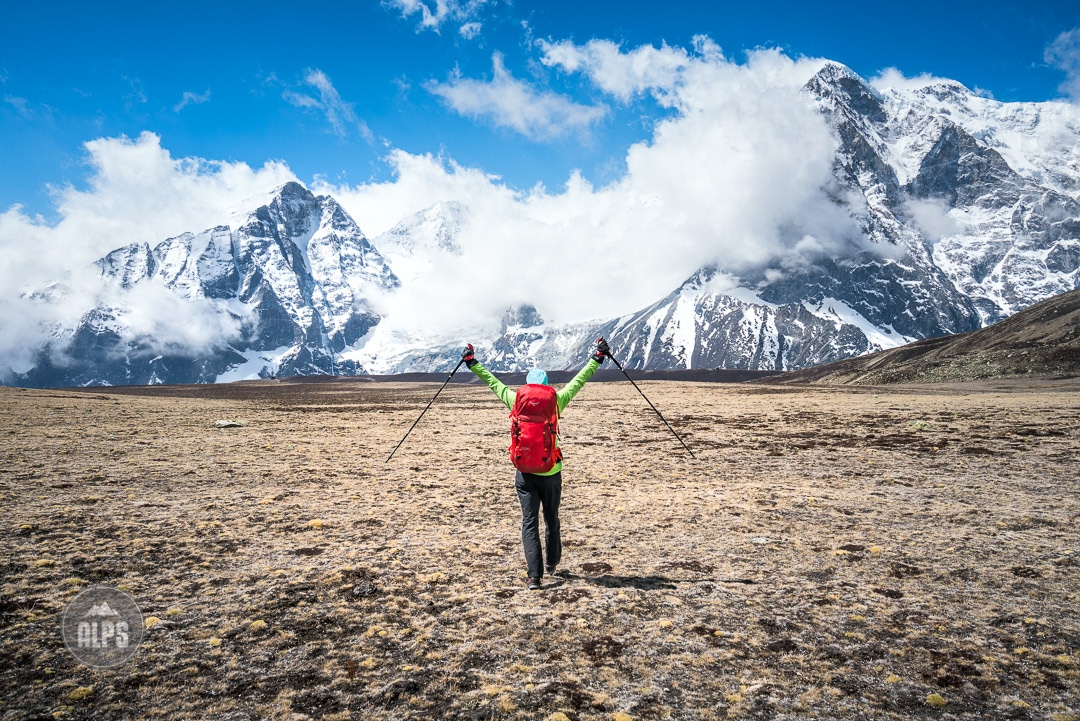 The first glimpse of the valley parallel to our own where we decided to go explore. The lakes where we camped, and the ridge we spotted are clearly visible on the left.

Traveling in the Tibet Himalaya requires permits and permission, in abundance. What you do needs to be cleared, authorized and in accompaniment of a CTMA (China Tibet Mountaineering Association) liaison officer. The itinerary that gets permitted will apparently never be modified. It is what it is, fixed.

So with great disbelief we were set free to be on our own at Shishapangma’s south face basecamp. Maybe the CTMA official didn’t want to spend up to 5 weeks in such a remote location without cell service, friends, or any Tibetan comforts. Or, maybe they saw that there was little we could do in a dead end valley surrounded by 7 and 8000 meter peaks.

Without minders we were free to do as we please. But, being in the mountains, and being mountain people, we weren’t up to anything sinister. We simply got to roam, hike peaks, explore ridges, and seek big views. All of which may or may not have been tolerated had we been under the watchful eye of a minder.

Early on the trip while exploring around basecamp, Janine and I found ourselves on a 5800 meter highpoint. Far below in the valley directly parallel to our own was another valley, although much less alpine and filled with a series of lakes. On its north end the valley seemed to butt up against the vastness of the Tibetan Plateau, while rising off the valley floor was one of the most perfect ridges we’d ever seen, the incredibly long east ridge of Nyanang Ri (7071 meters). Believing the valley to be accessible from where we approached our own, we decided we’d go do some exploring.

This is not something typically possible for people visiting this controlled land, yet for us it was a very tantalizing option. We packed our bags with three days of food and set out for a place where surely few foreigners have ever been, with no map, no phone, and no real idea of what we’d find.

What we found, and the feelings we had, will be something we will never forget. 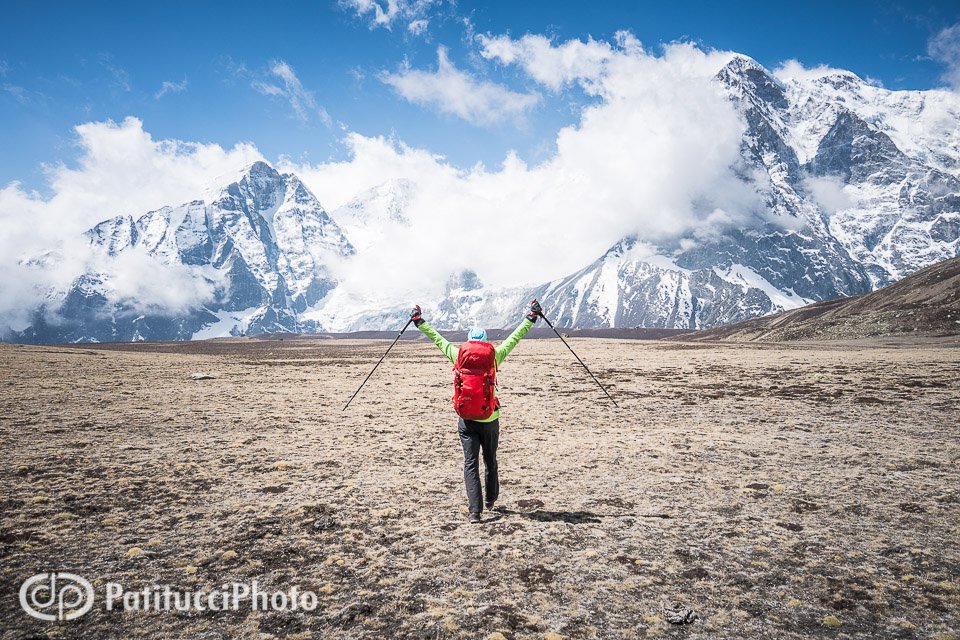 Free to roam Tibet. It wasn’t something we imagined we’d be doing, especially in a place few have ever been. 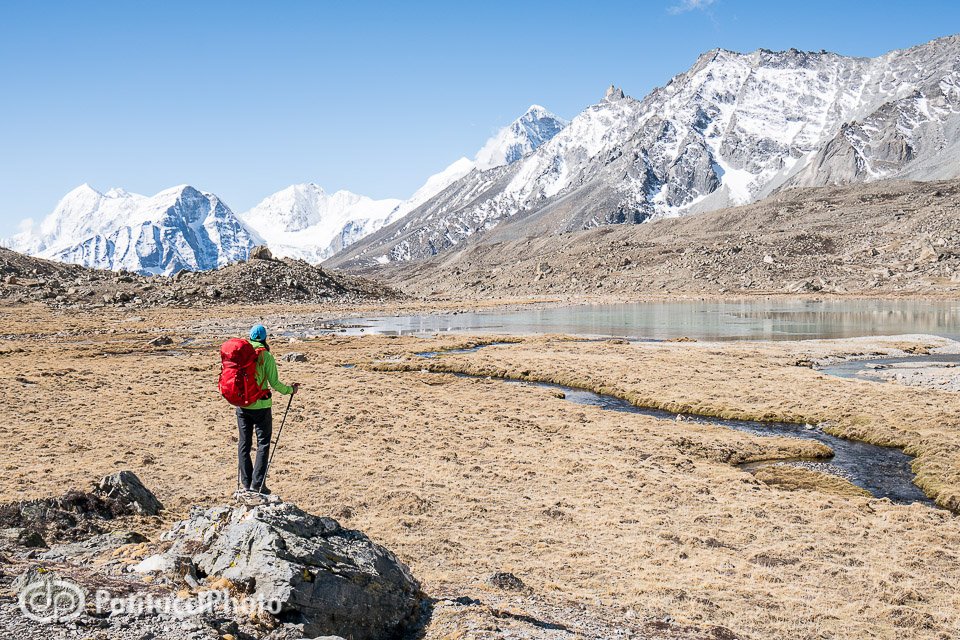 We followed the valley upriver where it began to flatten, forming the series of lakes we’d spotted from up high on the very ridge on the top right of this photo. Shishapangma basecamp is literally just on the other side but we could see nothing of Shishapangma itself. 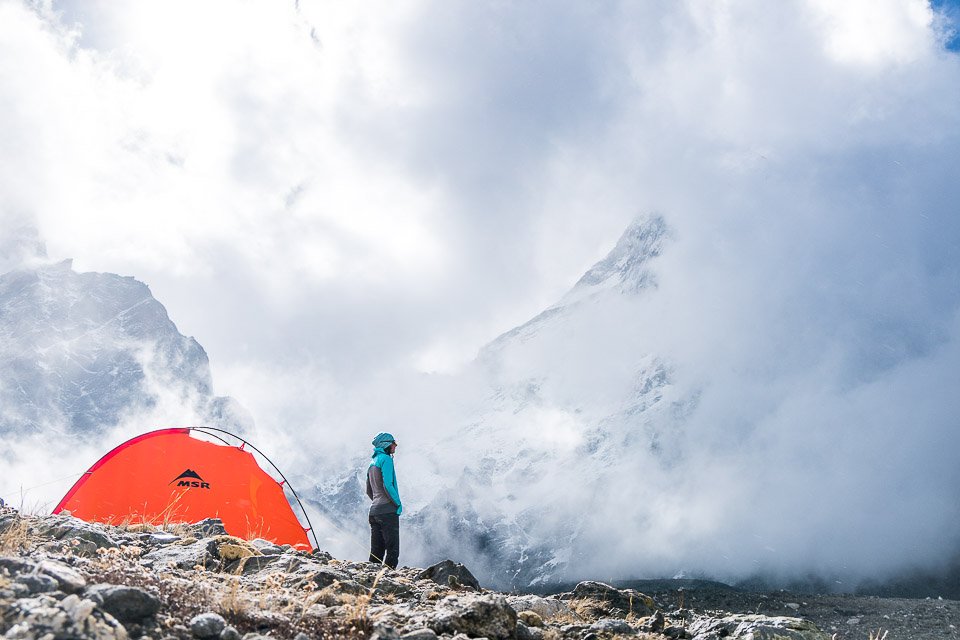 By the time we arrived to the lake for our first night, the clouds had done their daily duty and closed. We knew Nyanang Ri was up there, high above us, but we hadn’t yet laid eyes on just how high up it rose. 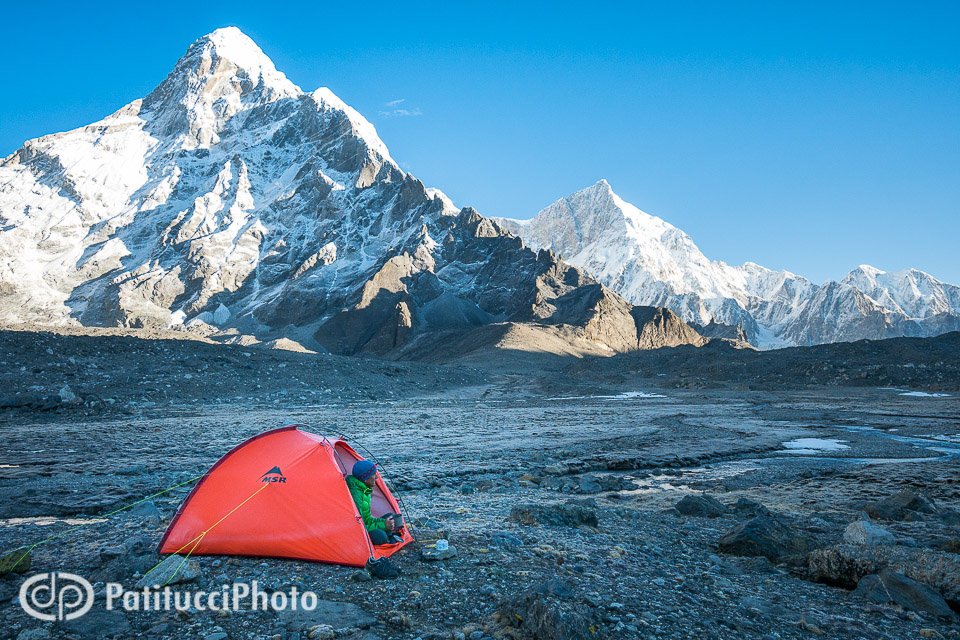 During the night the skies opened offering us starlit views of Nyanang Ri. From the warmth of our sleeping bags, and in the frozen silence, we sat marveling at its 2000 meters rising above us. Sunrise was another treat, although that sun couldn’t creep our way fast enough. 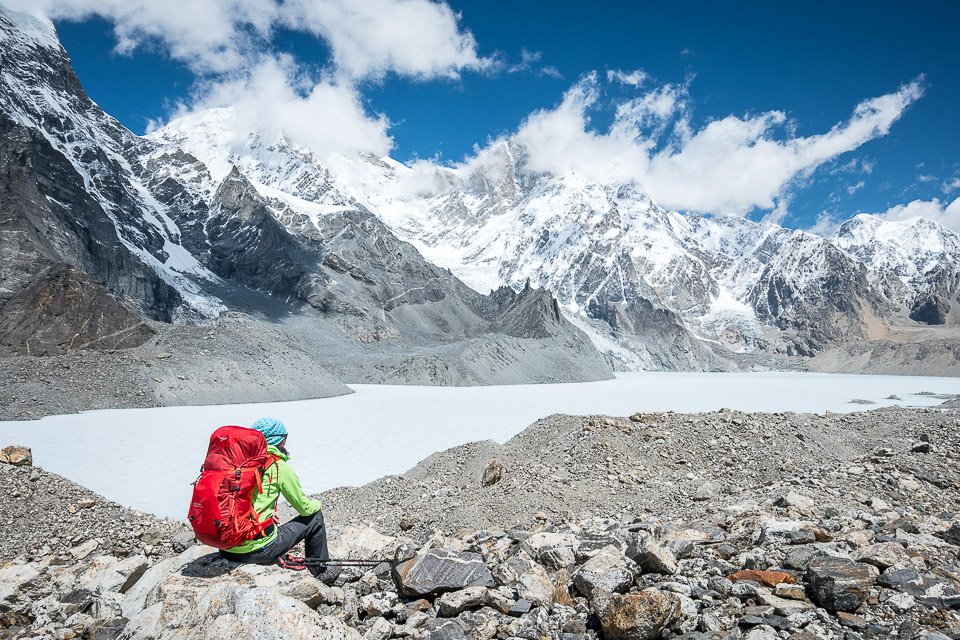 For our second day we headed higher up valley, making our way through loose rock on what seemed like an endless moraine. Finally, we reached a highpoint and found ourselves near the shores of a vast frozen lake at the base of the Shishapangma massif. 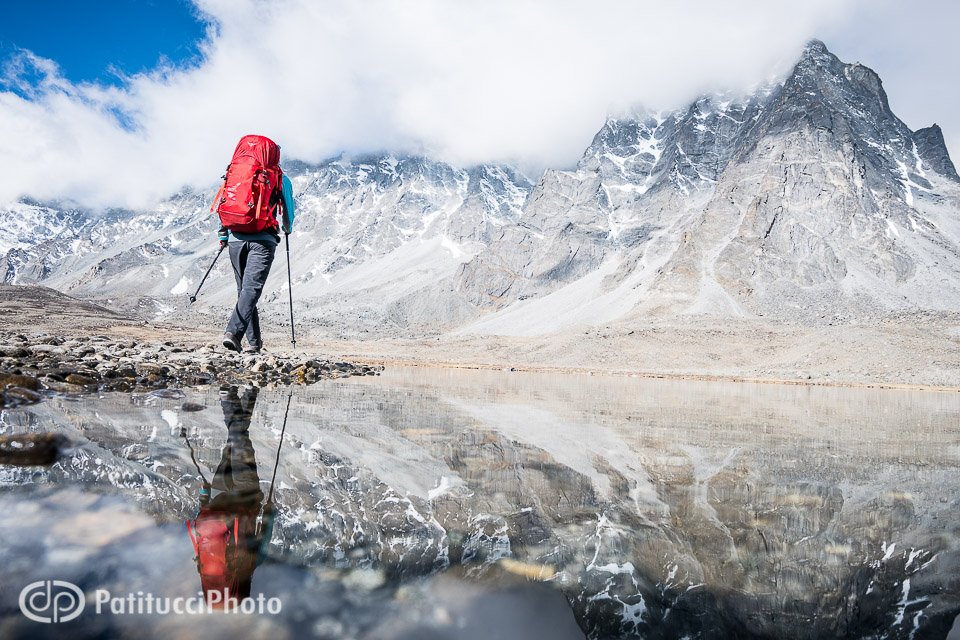 Arriving to another lake where we’d spend our second night, just ahead of the afternoon clouds. 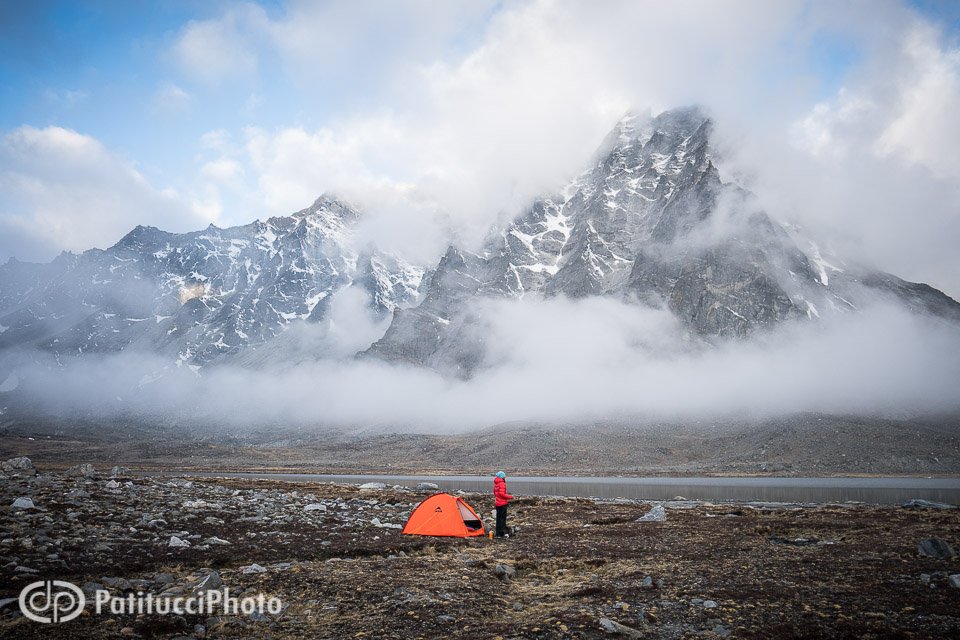 Waking up on our third day in moody, clearing clouds. 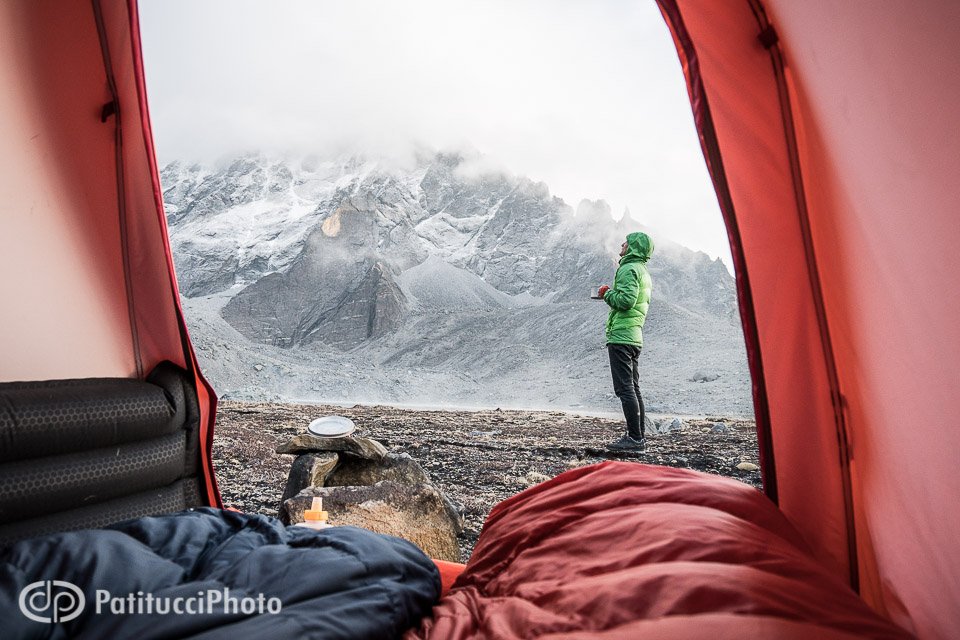