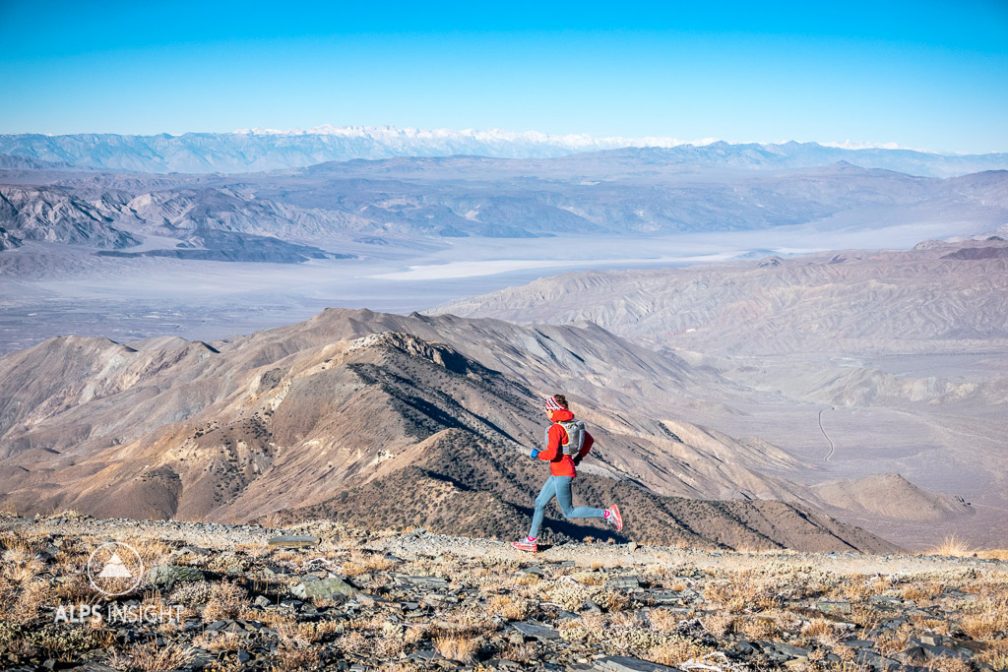 Our Wild West Trail Running Road Trip got off to a frozen start. We’d been seeking dry, thawed trails for a week when we finally decided to head for the desert. Our goal was to run Death Valley’s Telescope Peak. Being one of the hottest spots on earth, we naively assumed it must be warmer than alpine mountain terrain.

Telescope Peak, at just 3366 meters, is actually lower than some of the things we’d been trying to run in the Sierra. So it all added up to where we thought we should go. Plus somewhere in the back of my mind I remembered hearing that it makes for a great trail run.

As we set out early in the morning from Mahogany Flat Campground the question was not if we should bring a puffy on the run, but if we should bring two puffys on the run. Thanks to a passing cold front and north wind, it was arctic. We managed to be there for Death Valley’s swing to the opposite end of the extremely harsh weather spectrum.

Sitting in the parked car as it shook in the gusts of wind and was pelted by dust and snow flurries, I hoped Kim would speak some sense and cancel our plans. No such luck. And so like astronauts stepping out of their capsule to drift around in space, we finally emerged from our car.

The first part of the trail rises gradually through a pinyon forest with the Badwater Basin spread out far below. Being on the trail at sunrise makes for an unforgettable view thanks to the light creating a golden panorama of the stark Death Valley landscape. Slowly, we began to thaw and let our legs run.

Just four kilometers in, at Arcane Meadows, we rolled over a low pass that allowed for huge views. Far to the west we could see the snow capped line of the Sierra crest. And to the south our destination came into view, a distant grey triangle with a perfect single track trail leading right to it. It became immediately obvious that we’d been right about one thing, Telescope Peak is a great trail run.

The trail continued its gradual rise to about 3100 meters where it began passing Ancient Bristlecone Pines. Here, the final climb up a series of switchbacks leads to the summit ridge line. Thanks to the peak sitting by itself, the summit provides a 360° view of a whole lot of wide open landscape.

We shivered and shook on top for as long as we could endure. Silence, utter and complete silence, engulfed us. While a summit nap would have been nice, we’d have frozen in place. Instead, we started down.

The idyllic single track descent is just the right angle for letting the legs go and is the final confirmation that Telescope Peak is truly a masterpiece of trail runs.

Bishop’s Sage to Summit Mountain Shop is the place for gear and beta for any Eastern Sierra mission.