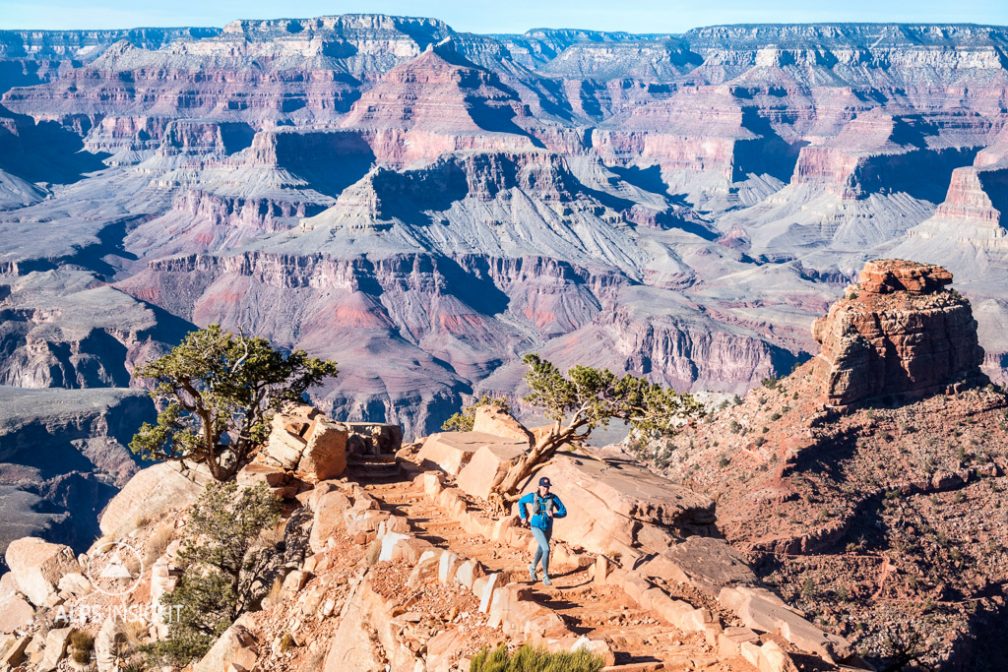 The Grand Canyon is one of the few places I’ve been that literally blows the mind wide open.

“Ya, whatever, it’s a big canyon.”, you think before you set your soon to be bulging eyes on it for the first time. Nothing can prepare you for just how vast and stunning it really turns out to be. This was my second time to the Grand Canyon and still, I stuttered and stared at all of its magnitude.

But how had we not considered running it while in the area? Kim and I were in Moab on our Wild West Trail Running Road Trip and about to begin the drive back to Bishop and the Eastern Sierra. We were trying to decide if we should do the long haul straight through, or layover somewhere on the way for something to run.

It was Janine, on a call from Switzerland, that suggested, “Go run the Grand Canyon!”

With zero hesitation, we jumped in the car and were on the way.

For whatever reason, I never considered that I would run in the Grand Canyon. I’d hiked a big section of the Tonto Trail before, been down to the river, loved it, but never gave it much more thought.

I actually didn’t even know how to run Rim to River to Rim… which trails would we use?

We remembered seeing that our friend Brody Leven had run Rim to Rim to Rim last year, so I hit him up for beta.

“Descend the Bright Angel Trail and climb back out on the South Kaibab. I think that’ll work best for photos”, he suggested. He knew my needs. With little more intel than that, we set out at first light the next morning.

For us Euro runners, the thing we couldn’t stop talking about was how you start running this route by descending almost 1500 meters. When does that ever happen? We seem to operate under the rule that what goes up must come down. We always go up first!

Kim was concerned that her quads would be a mess thanks to no real warm up prior to the huge descent. Or, that her legs would just assume it was quitting time after that kind of drop.

But, it turns out it’s a great way to start a run. Better still, climbing out and being finished when you hit the top is a huge treat. In the Alps, we love our Way Ups, but maybe it’s time we consider seeking out some Way Downs.

We felt that descending the Bright Angel Trail was the right call. In every way the trail is perfect, especially given that you never see the river until at the very bottom when you turn a corner and there it is, massive and green, flowing right in front of you.

Later, we learned that the standard running direction is opposite of what we did. Runners usually go down the South Kaibab and up Bright Angel. This is because there is a water source on the Bright Angel, and the up is much less steep.

In our opinion, as a winter run, it doesn’t really matter. That water source would be vital in warmer temps, but for us conditions were quite cold and water availability a non-issue.

And, Brody had been right about the best direction for photos. The top of South Kaibab gets great light where the top of Bright Angel is often in a deep canyon.

Our solitary day in the Canyon came to an abrupt end where trail turned to parking lot. There, we found ourselves among all the many types of tourists, most of whom weren’t moving beyond the asphalt. But we found a great solution to exit the sudden chaos by disappearing on the Rim Trail. There, in just a few steps, things rapidly became empty again. The few extra kilometers of walk & trot back to the start with its views over the Grand Canyon, and time to process it all, was the perfect return.