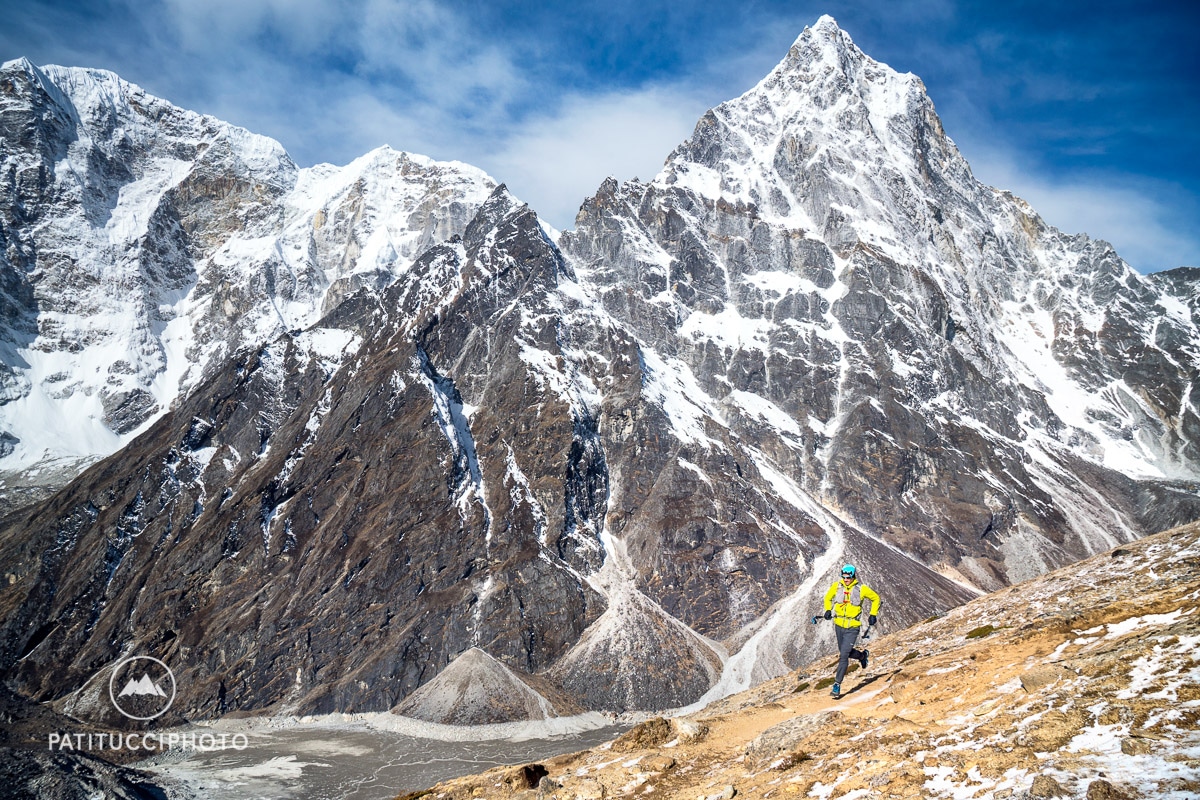 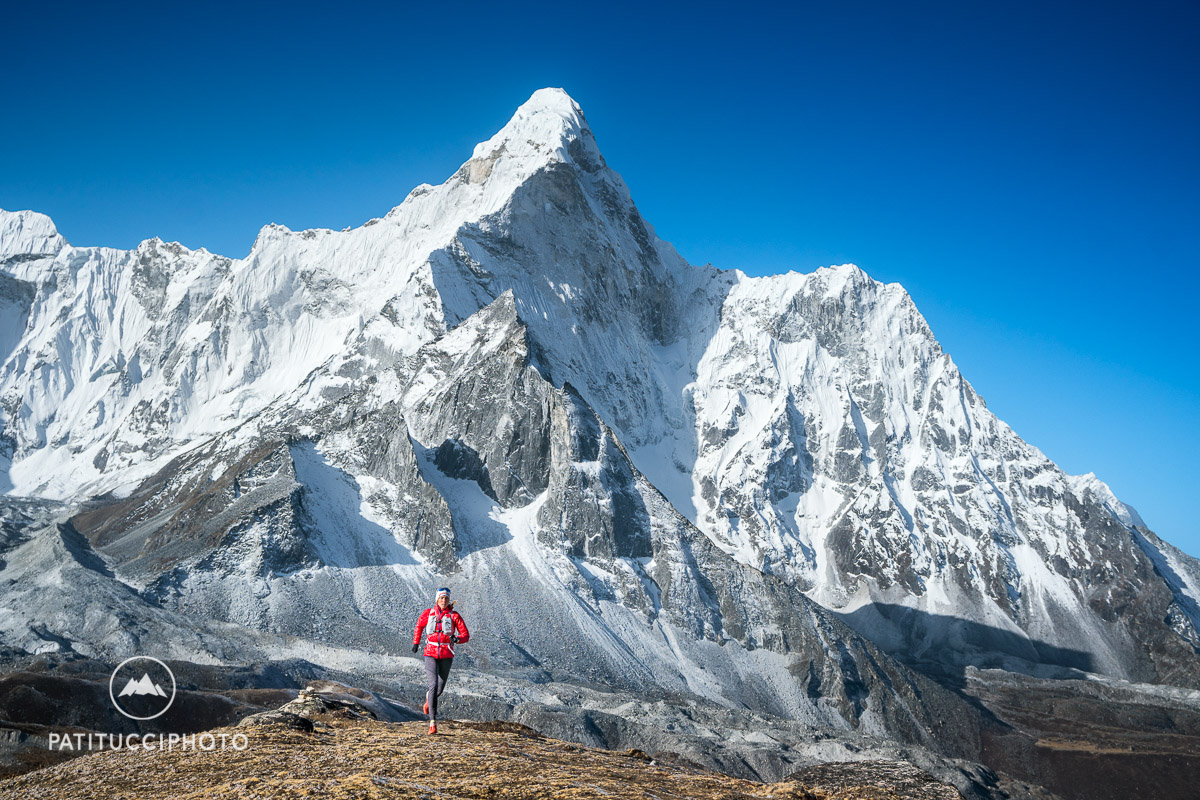 Kim Strom heading up Chukhung Ri, a 5546 meter high point above Chukhung, in the Khumbu Region of Nepal.

Trail Running in the Nepal Himalaya

Four days before we headed off to run the 3 Passes Tour I couldn’t walk. Kim had neon green mucus draining from her eyes.

Elevation had not been kind to us. For me, it never is. 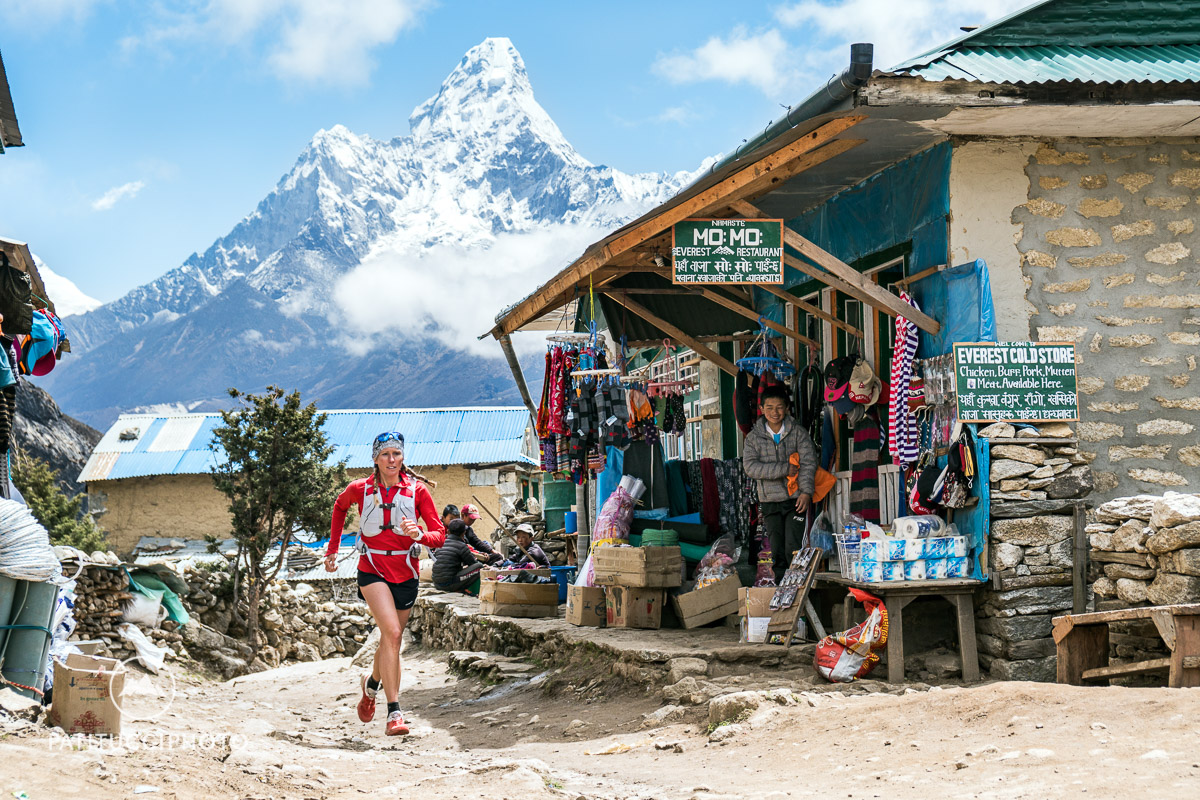 Kim running through the village of Khumjung, 3800 meters, in the early days of our trip, pre-sickness and peak psyche. Ama Dablam rises proudly behind. 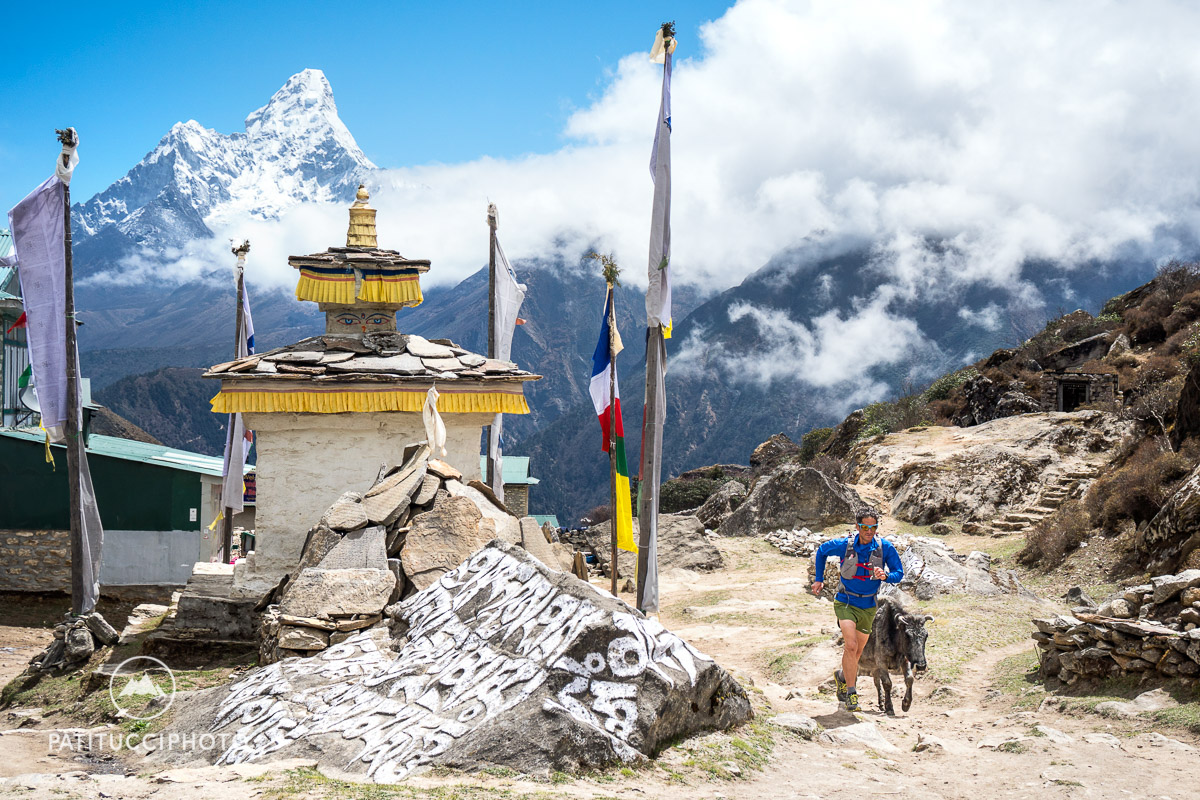 Dan and yak friend cruising past a mani stone while passing through Khumjung.

The coughing is what got me. I hacked so hard one morning I felt a rib explode. The next day, while walking to our basecamp guesthouse in Chukhung, and after 24 hours of back pain, my right leg went numb. I couldn’t breathe, my back was out, and now I was facing a pinched nerve. Kim, also showing signs of an imminent respiratory infection, was forced to carry my pack on top of her own.

Arriving in Chukhung, where we were greeted by our friends David Göttler and Hervé Barmasse, we were quite the team. “You guys are a complete mess”, noted David, also there to run the route, and in perfect health. We were supposed to be there to trail run and train. Instead, we went straight to bed. 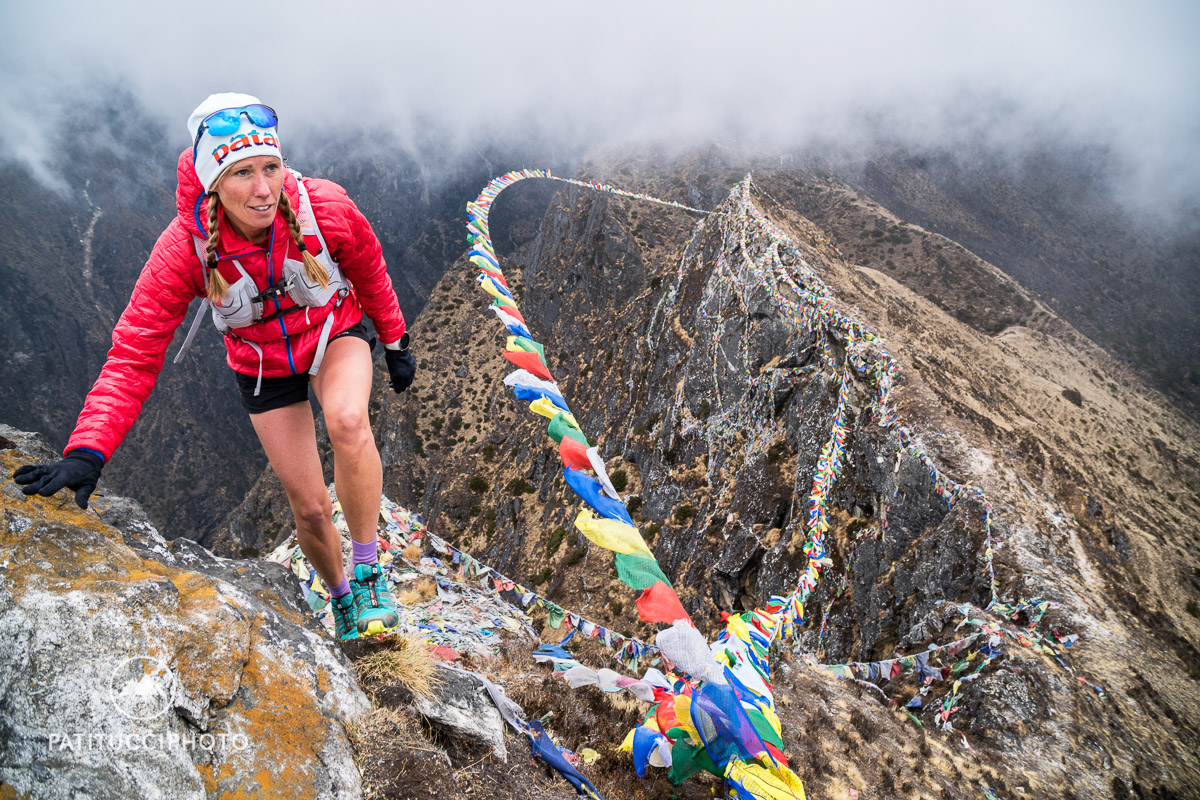 Kim on a ridge traverse above Kunde and Khumjung during the acclimatization period in Namche Bazar.

Joining David and Hervé, both professional alpinists and full time athletes, was a great lesson in training at elevation. For them, as climbers, they were there in preparation for an 8000 meter peak sans supplemental oxygen. Their objective was to acclimate, and to basically get all around strong for a bigger goal. Chukhung served their needs well. They could run, climb easy alpine peaks and rest comfortably in the luxurious Khangri Lodge. They were in and out of the Khumbu in a shorter period than we were. While we spent 12 days going a longer way to Chukhung, they arrived after just two days from Lukla, and only spent a total of twelve days in the Khumbu Valley.

The trip was Ueli Steck’s idea, hatched over the winter of 2017. He and David had already discovered Chukhung to be the ideal training basecamp for their alpine goals. Running the 3 Passes tour was their end game, the finale to a period of training at elevation.

The night before Ueli left for Nepal in the spring of 2017, he had dinner at our house. For Kim, it was the first time she’d met Ueli. Together, we all discussed how effective the training period in Chukhung had been for him the month before.

“I’m going again next year. It’s so much fun and perfect for everything. You guys have to come too.”, Ueli announced with huge enthusiasm.

Later, haunted by this, I swore to myself I’d still go.

Dan on an acclimatization run on the Cho La Pass trail, part of the 3 Passes Tour, near Dzongla. Cholatse is above.

Nepal’s Khumbu Valley is mountain mecca. While I’ve been there four times, it was Kim’s first. The vast majority of people visiting the Khumbu come for one thing, the Everest Base Camp trek. A few places down on the popularity list is the 3 Passes Tour, which, in my opinion, is the ideal journey through the region thanks to fewer people, incredible views of Everest, Lhotse, and Ama Dablam, and more interesting terrain to pass though.

Most people start the trek in Namche Bazaar, head west to Thame, and then to Lunden, a tiny village at the base of the first pass, Renjo La. After crossing the ca. 5400 meter pass, Gokyo Lakes is reached for the next overnight. From Gokyo, after a sunrise ascent of Gokyo Ri, a short walk to Tangnak serves as a bit of rest before the next day’s crossing of Cho La, ca. 5400 meters, to Dzongla.

From Dzongla, many will have another easy day reaching Lobuche, at the foot of the last, but biggest pass, Kongma La, ca. 5550 meters. From Kongma La, it’s all downhill to the end of the 3 Passes tour in Chukhung. It should be noted that from Chukhung, most will still require four to five days to Lukla. And, all elevations are approximate as nearly every map indicates something different. 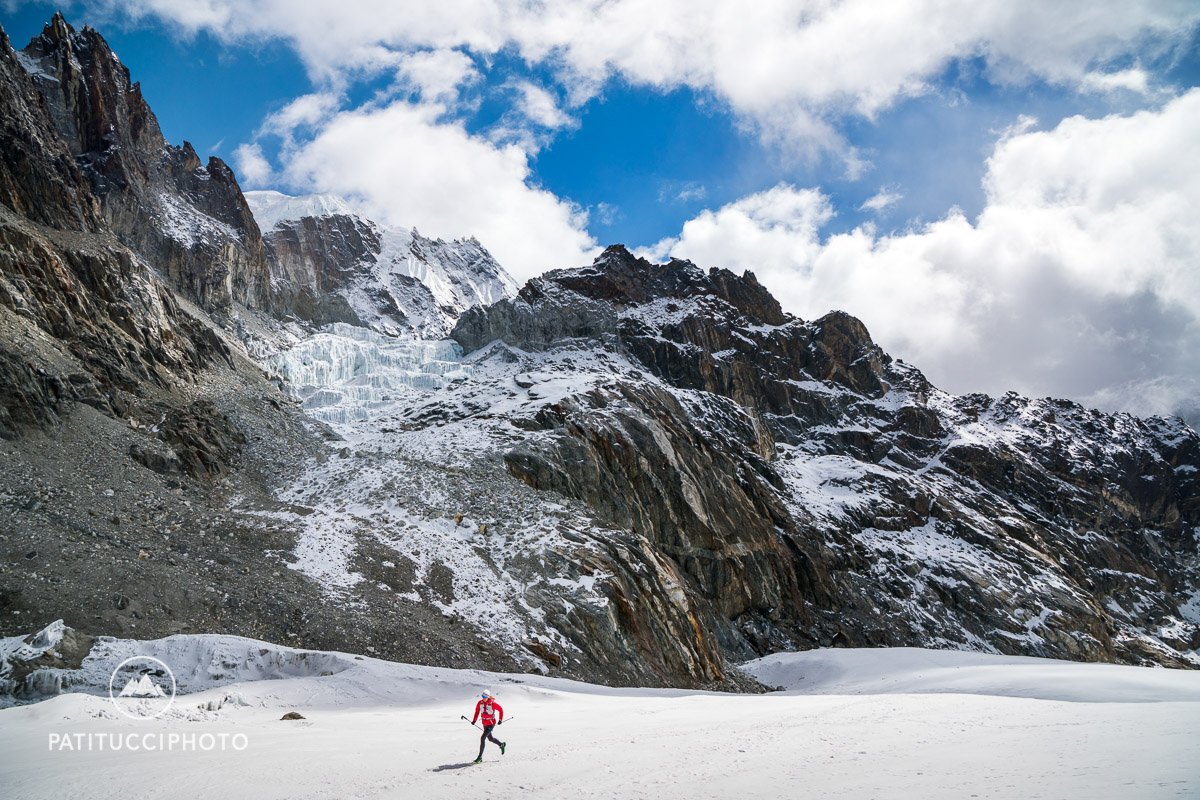 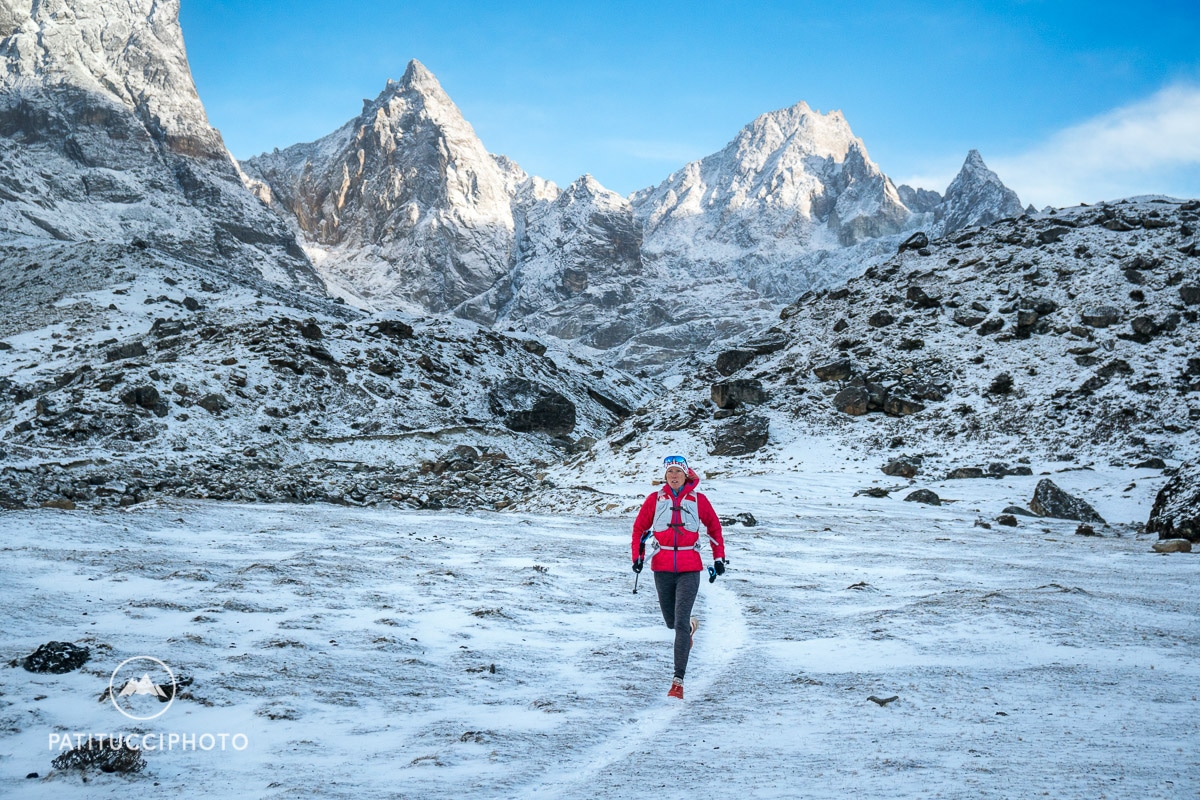 Kim on an early morning acclimatization run from Dzongla.

Prior to leaving for the Himalaya, we trained and prepared by running and ski touring. But the elevation is only something we could deal with upon arrival, by properly acclimating and taking care of ourselves. The strategy was to slowly make our way to Chukhung, properly acclimating along the way, and getting in some running as preparation.

We spent three days in Namche to slowly adjust to the altitude, and to run what I knew to be  superb trails in and around Khumjung.

From Namche, we worked our way up to Gokyo Lakes, climbed Gokyo Ri, then crossed Cho La for the elevation. Also, to get to know the pass in the event of bad weather. Which it turns out, was a huge help for our actual crossing.

Finally, we arrived to Chukhung, but avoiding Kongma La by opting for the easier approach via Dingboche.

Had we not gotten sick, or threw ribs out, or pinched nerves – we would have been super acclimated and ready to run. But, elevation is a big variable and we had to deal with some serious obstacles. 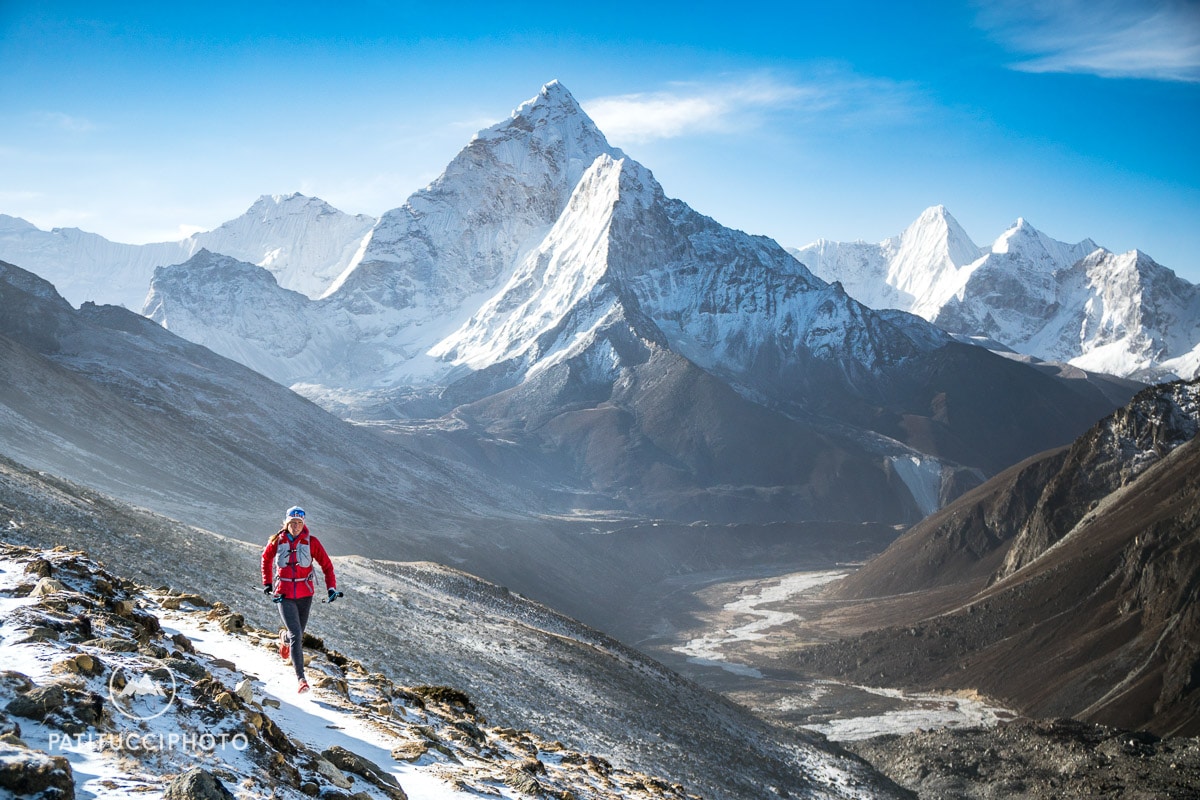 Rolling along above the Khumbu Valley with Ama Dablam behind.

Over the last years, we’ve noticed a lot of people heading to the Himalaya to trail run. In addition, there are numerous trail races becoming popular and a couple Nepali runners doing very well in the Euro Skyrunning scene. Nepal is on the trail running radar.

But what does it mean to “trail run” there? Being performance focused at 4500 meters is a different game than at 2000 meters back home in the Alps. The experience becomes all about short term body management. I’d run there before, and I’d been along with Ueli Steck for three expeditions that included trail running as part of the basecamp program. I knew that a critical balance must be found between output and recovery time. And, it’s different for everyone. 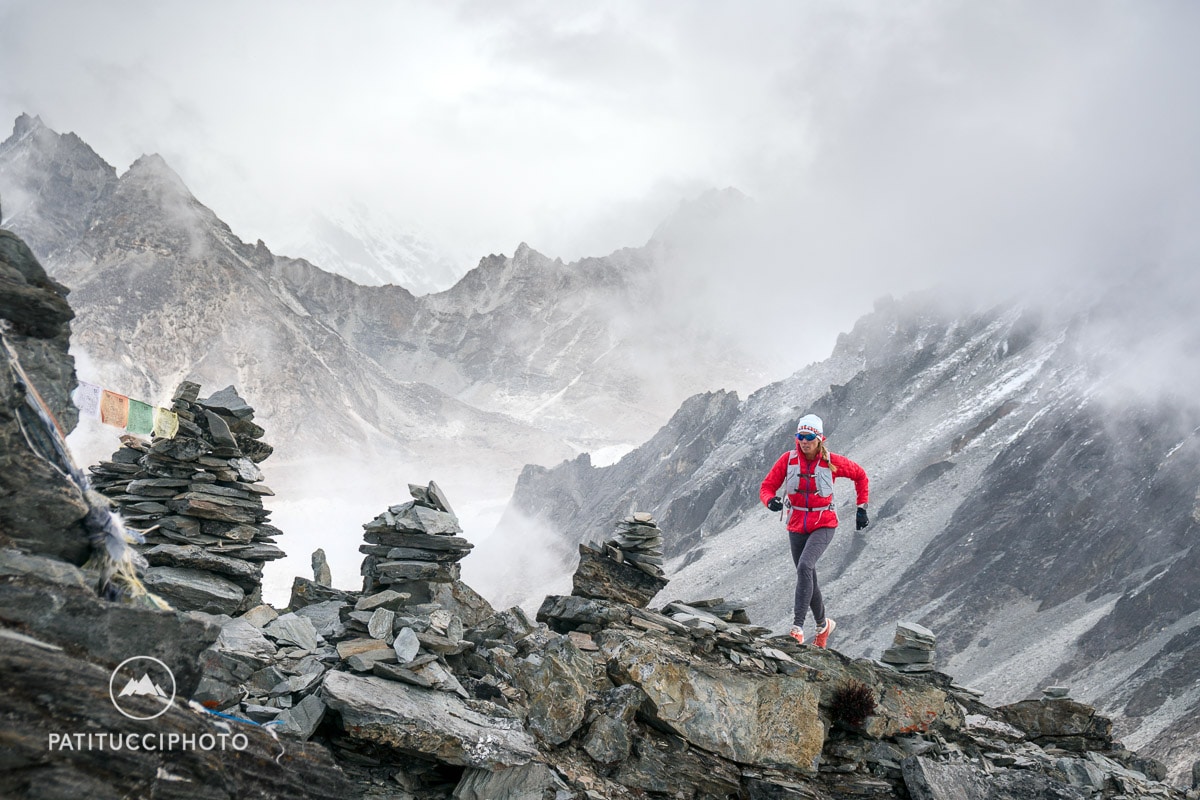 Testing running on Chukhung Ri, a 5546 meter high point above Chukhung, to see how we felt for the 3 Passes launch.

I started to notice that going high to trail run vs. having a high trail running objective, are two very different things that must be approached appropriately. One of the issues of being above 4500 meters for so many consecutive days is that the body begins to deteriorate, it doesn’t recover after big efforts, doesn’t always get enough rest, and is prone to getting sick. While it is different for everyone, many people visiting the Khumbu get the notorious “Khumbu Cough” which can happen anywhere at high elevation, not just the Khumbu. The cough is the likely result of labored breathing at elevation of extremely cold, dry air, which dries out the lungs and bronchial passage.

If you are there to trail run, you go day by day, take rest days, and run according to how you feel. But if you have a trail running objective, timing is critical. You need to be well acclimated, healthy, and not overly weakened from the time spent high. And all this comes on a case by case basis, hopefully with some prior experience to tap into. Also, luck plays a big role. 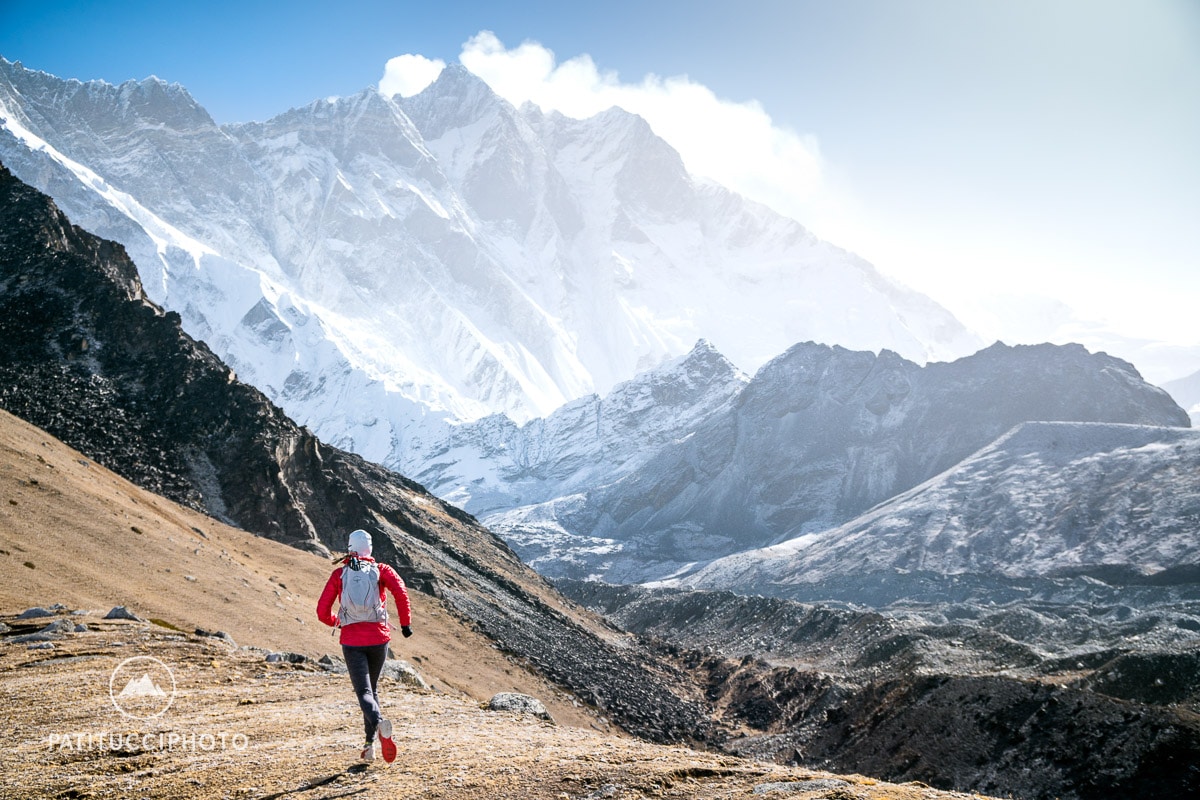 Kim heading up Chukhung Ri for the second day in a row, and feeling better. Thinking we might have a chance. The massive south face of Lhotse, 8516 meters, is behind.

When all this comes together, or when it’s as good as it’s going to get, you go.

For Kim and I, as we discussed our options for running the 3 Passes in a day, our only advantage was that we were still seemingly ahead of body fatigue. The fitness we’d gained preparing for the trip, experience, and being well acclimated, still played into our favor. While my back was occasionally hurting so much that I was considering a helicopter out, and Kim was going through a roll of toilet paper a day for her incessant nose blowing, we remained slightly optimistic that we could pull this thing off…