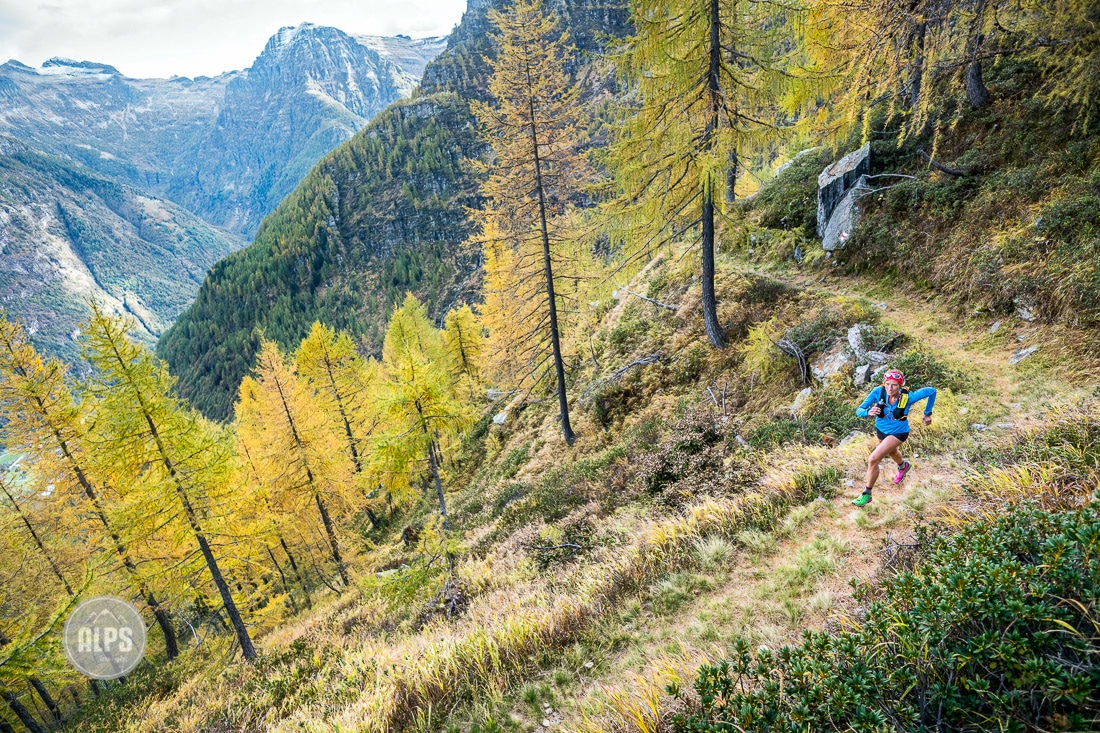 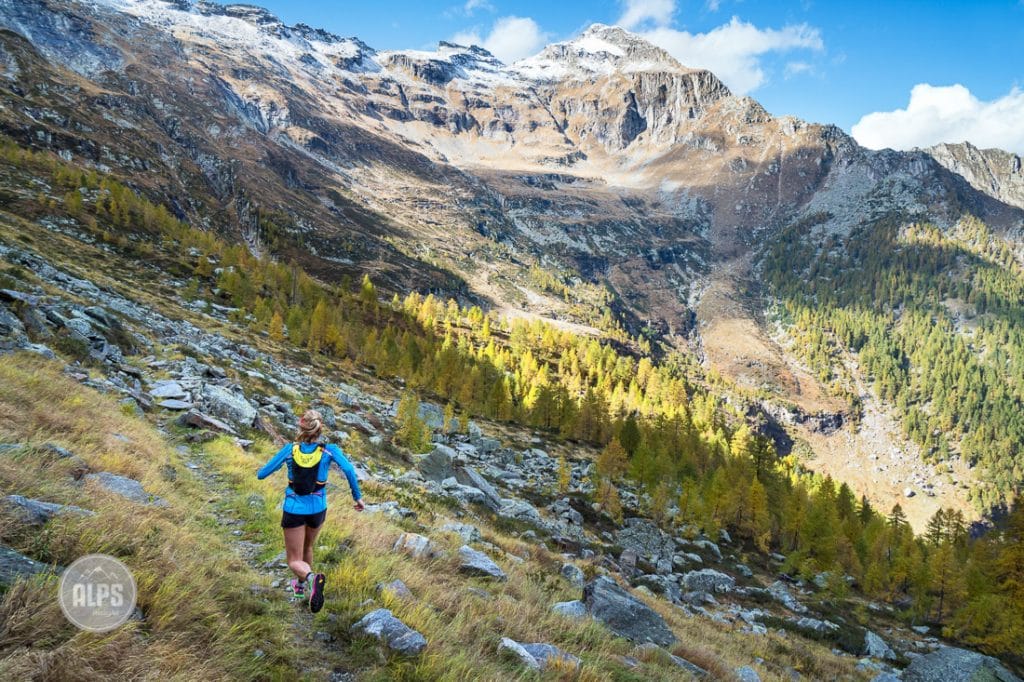 The way to Monte Zucchero is looking pretty sweet.

Stop and Smell the Goats

Janine spreads a map on the dinner table between plates of polenta, pizza, and pasta. “I found a loop for us,” she says, tracing the route line. Tomorrow looks like a long day … even without the option to add an extra ridge … if there’s time. Dan and Janine had recently hiked the Via Alta Verzasca and couldn’t wait to return to the Ticino region of Switzerland, so here we are, the night before our big run, planning an impromptu adventure to the 2735 meter Monte Zucchero to top-off  The Way Up project for 2016.

In the morning, we set-out from the doorstep of the cozy Ristorante-Pizzeria Ai Piée in the secluded Val Verzasca after devouring all the breakfast breads, jam, yogurt, coffee, and meat plates overflowing the table. Janine butters an extra sandwich for the road, hoping to “grease the knees.”

We step into the early chill and follow the Verzasca River for a flat 3 kilometer wake-up jog. From Gerra, we hoof up 1000 meters to greet the first warmth of the sun rising above the still-dark valley, now far below. A cluster of stone cottages at Veld rewards our effort with fresh water and a moment to enjoy the view over the Val Verzasca. I’ve often imagined frolicking along the pastoral Swiss Alpine trails in one of the Patitucci’s colorful stories, and now we are finishing up a great week of running and shooting together. We’ve toured more of Switzerland – from the Bernese Oberland to Graubünden to Ticino – than I have in seven years living near Geneva. Frolicking might not be exactly the right word for these uphill hauls, but we were celebrating the culmination of a busy year in the mountains for each of us. We ask our legs and energy reserves for one more big day, at least until ski season. 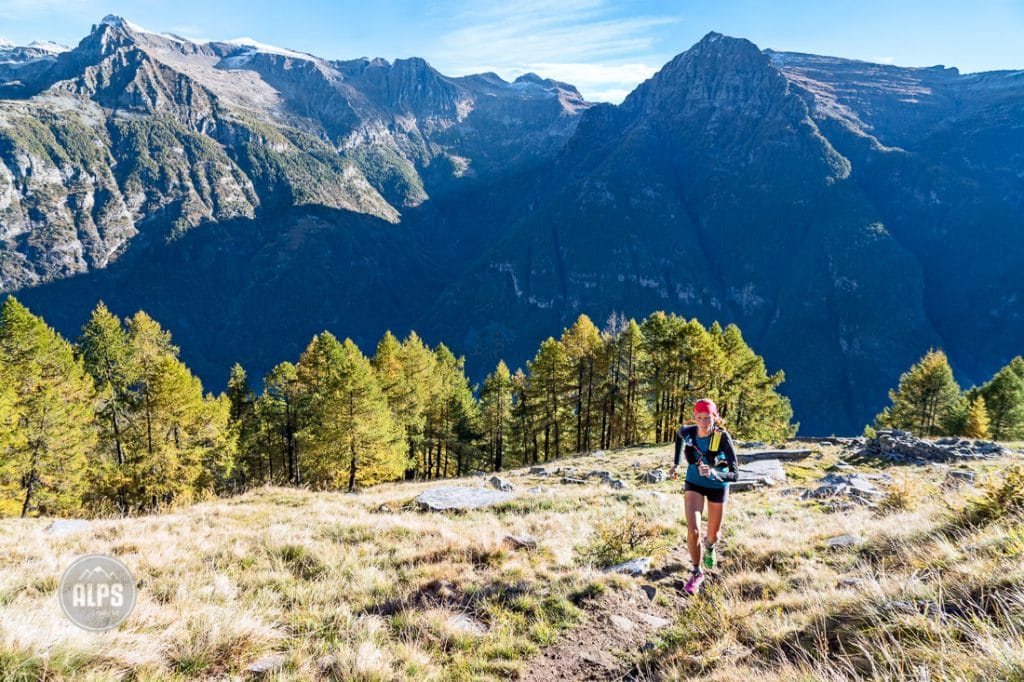 After 1000 meters of up in the shade, everything is warmed up once the sun hits.

I quickly learn about Dan’s infatuation with goats. He can’t pass one without stopping to give it a few scratches. The clang of bells means I have a chance to catch my breath while chasing the Patitucci’s through the Alps. A few butt their heads against Dan and he rubs behind their horns. I take a short rest while he marvels at the bearded billy goat and his fragrance. The goaty-odor wears into his sleeves and tights so Janine and I can experience the scent all day. If there was a way to bottle goat-smell and wear it as a pungent cologne, he would do it. Dan finally breaks away, followed by his new friends who want more attention until they realize we are out for more than a gentle stroll in the high pastures. 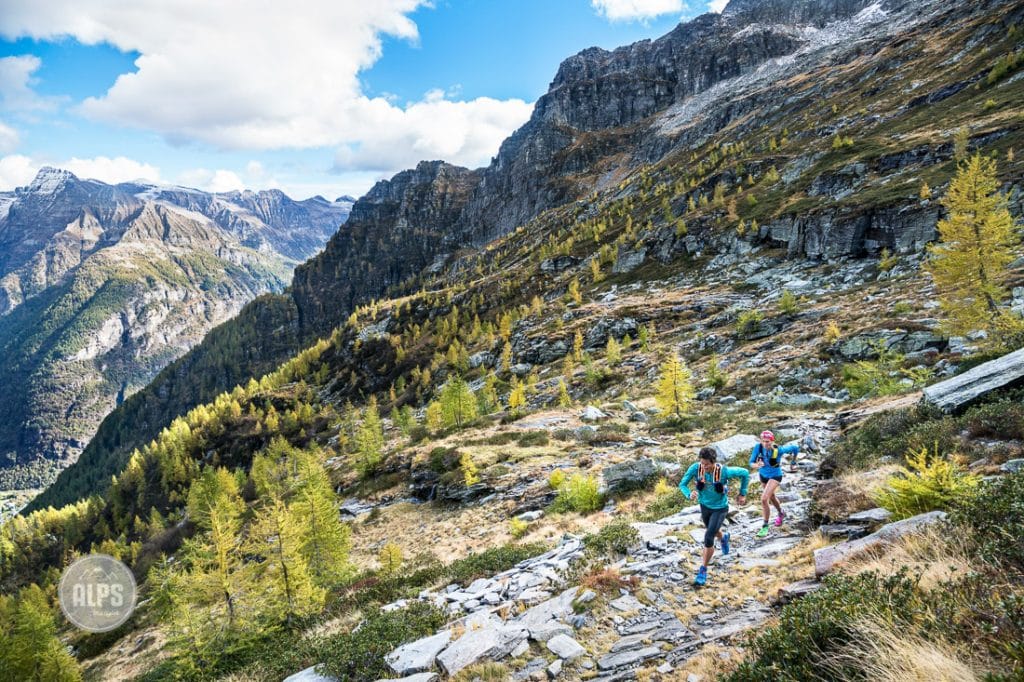 The 10km traverse was all about rolling through this before the last big up to the summit.

Between heavy breaths, we tell stories of other days in other mountains and who we met along the way. I try to pick-up a few essential Italian phrases as we go, prioritizing a few of Dan’s choice expressions that might be useful for my coming international move to Italy, but none seem to apply to the type of day we are having. Today, we are entirely alone on the trail, playing, crossing bridges, and skipping on rocks over clear pools, far from any other demands for our attention. Bobbing near 1800 meters altitude, 10 kilometers of undulating traverse carries us through tawny grasses. Now we frolic. The first view of distant Monte Zucchero and the pleasure of movement urge us to run, but the ombré larch and autumn pallet invite us to linger in the sun and savor the warm air. We are torn between moving and pausing, but find a balance between the impulses. We run wild and free, dance atop rocks, and slide through the snowy hints of winter. Noise and distraction below fade. We splash through streams without a thought of age or time or tiredness. Over and over, we are struck, mid-stride, to halt and take it all in. Even our language becomes distilled to appreciative grunts and the sighs that burst from someplace beyond words.

Running, we imagine living in the stone cottages perched above the valley, receiving supplies in pulley boxes and only chatting with the goats and chickens. I sift my hands through tall grasses lining the trail, and they become the cheering high-fives of fans that funnel you into the finish line of a big race. Sometimes I become an ibex or a bird or the river itself pouring over the mountains. 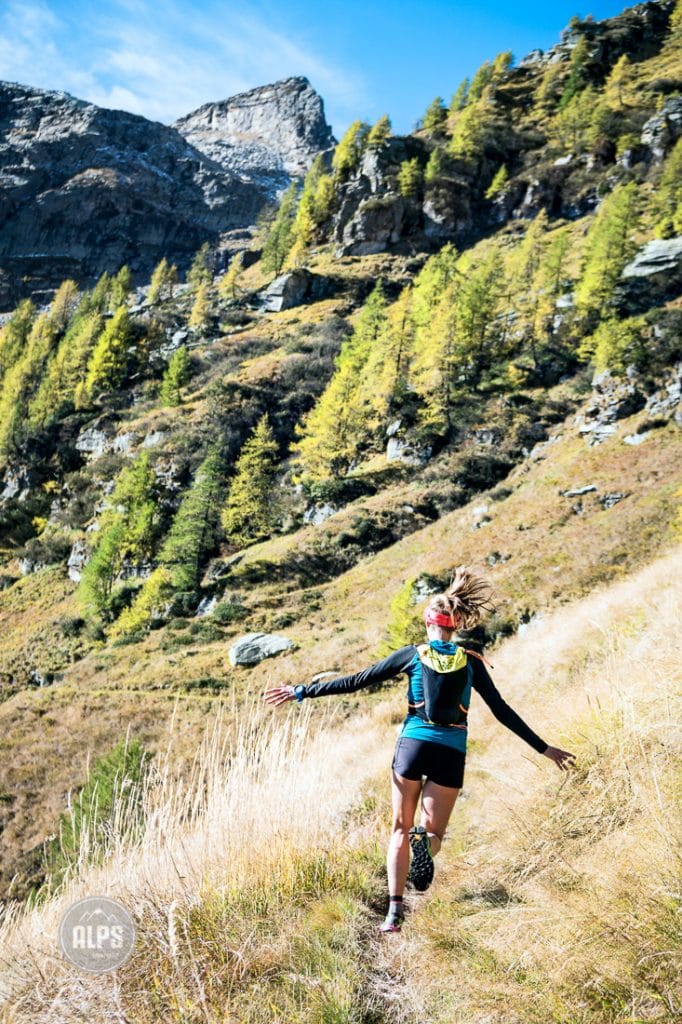 Kim, reaching out to her fans.

Bells pull me out of my imagination again. Reality is more beautiful than the stories I am pretending in my head, even if it smells like goats.

We weave through the next group of lazing animals. They watch as we follow the suddenly rising trail, and I look back to make sure Dan hasn’t decided to join them for a nap on the sloping grass. We ascend nearly 1000 meters more in just 3 kilometers to Bocchetta di Mügaia and the first look towards the Valle Maggia.

A rocky scramble connects the pass to the summit and it’s challenging to find the route beneath the untracked snow. From the top, we inhale the colder air and the view of endless layers of mountains in all directions. This is why we run. Not only for the summit, but for the journey. This is speeding up as a way of slowing down. 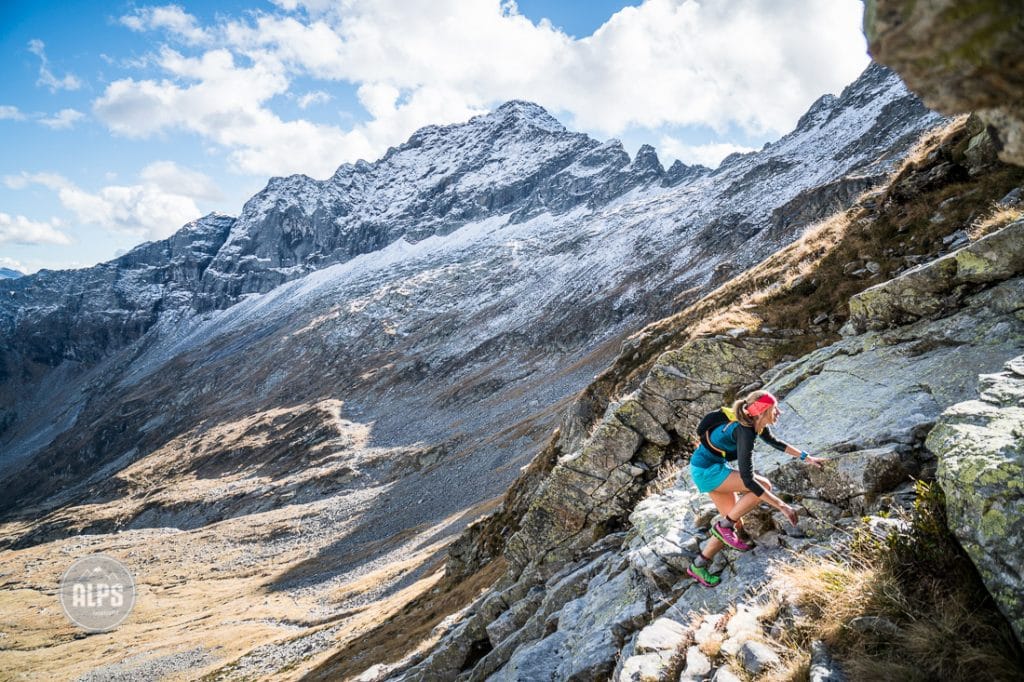 When we first laid eyes on the way to Monte Zucchero we were curious how it would get through some rock bands. The answer, easy scrambling straight up.

We don’t have time to delay at the top of Monte Zucchero, especially after indulging in frequent photo stops and goat petting along the trail. It’s already late in the afternoon and our wet feet and hands remind us to begin the descent, we need to hustle to beat the dark. The autumn days are getting shorter but we decided to leave our headlamps behind. I even unpacked mine from my running sack … taking fast and light a bit too far perhaps.

We stretched the day as long as possible, and now we’re forced to race the sun. The way down is steep and slippery in the wet snow. We lose elevation quickly before arriving at a high plateau. Nothing keeps you present like a technical downhill run – rubbernecking at the rocky peaks while scanning the ground ahead to avoid a stumble. A gnarled forest path drops to the Osura River and meets the road for a final 5 kilometer kick back to Brione, still far below.

In the end, we spent about 10 hours on the trail, covered 37 kilometers with 2500 meters of vertical gain, and even took the time to stop and smell the goats. Monte Zucchero was certainly the sweetest finale for The Way Up, leaving us with a taste for more mountain runs next trail season.

Kim Strom is an accidental mountain runner – curiosity to see what would be around the next corner or over the next summit made her move faster. Growing up near flat Chicago, it took a few years living near the French Alps to build the strength, confidence, and experience that unlock the freedom of running in the mountains; a bison dreaming of becoming a bouquetin. She has a contagious passion for the mountains and hopes to motivate and encourage others in their adventures. When  she’s not running, she’s skiing, doing yoga, and baking vegan treats to share with friends, but most of the time she’s out playing in the mountains. You can follow Kim on Instagram. 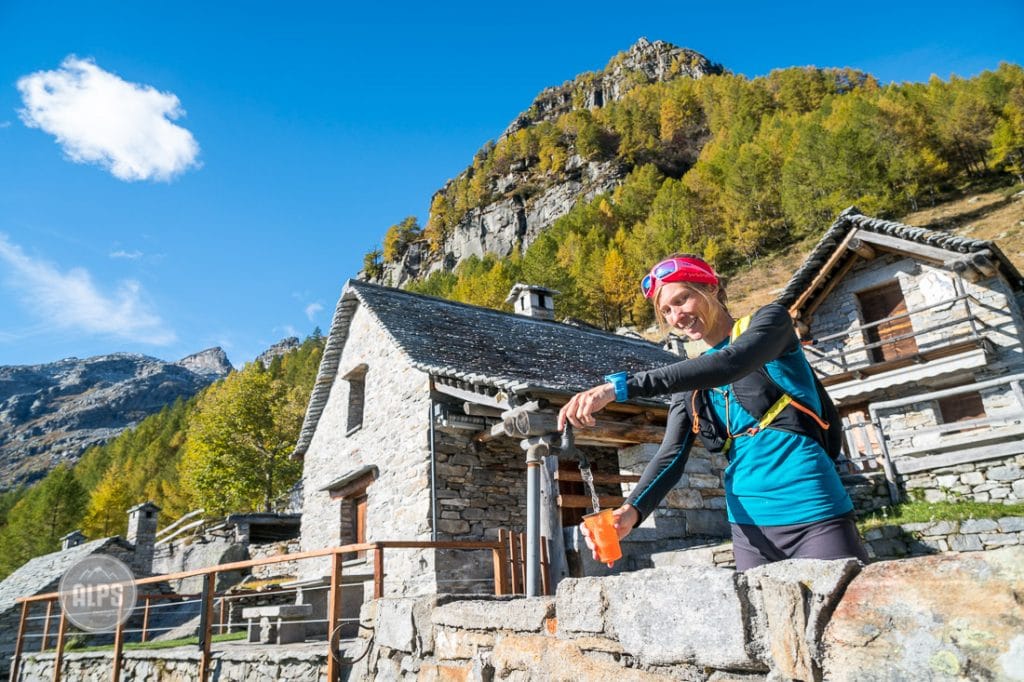 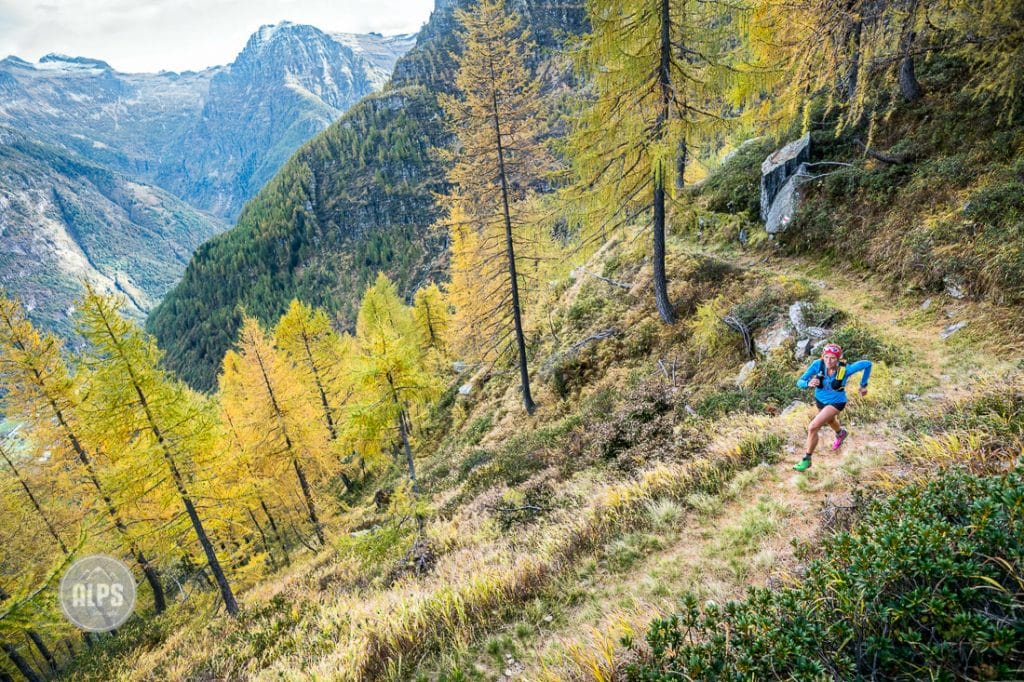 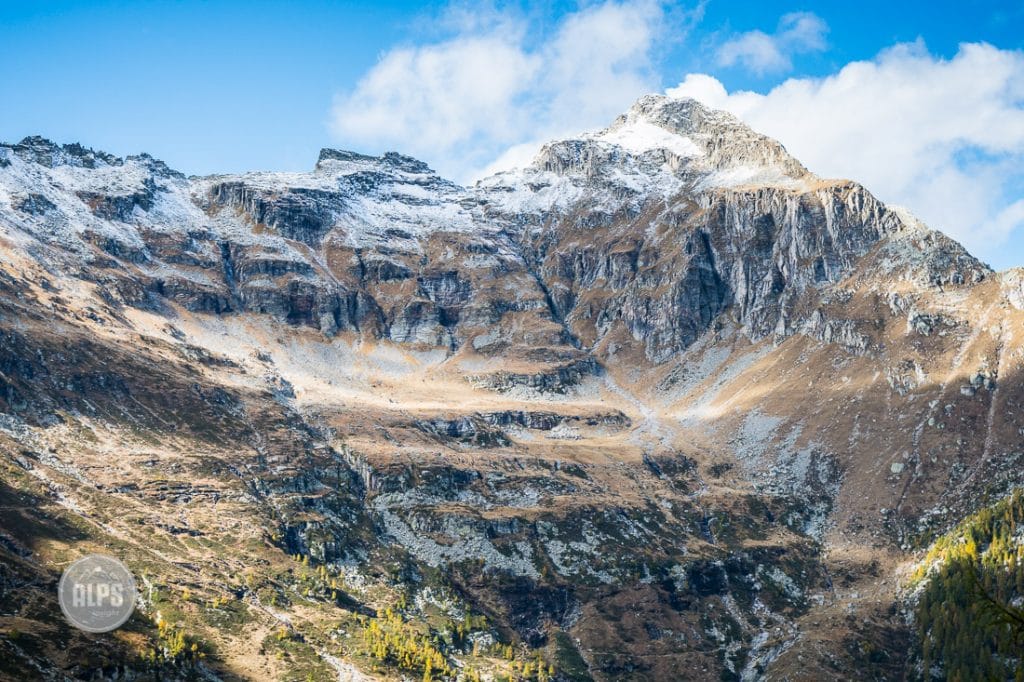 Our first glimpse of Monte Zucchero. It doesn’t look like a trail running day out, but it was the sweetest of them all. 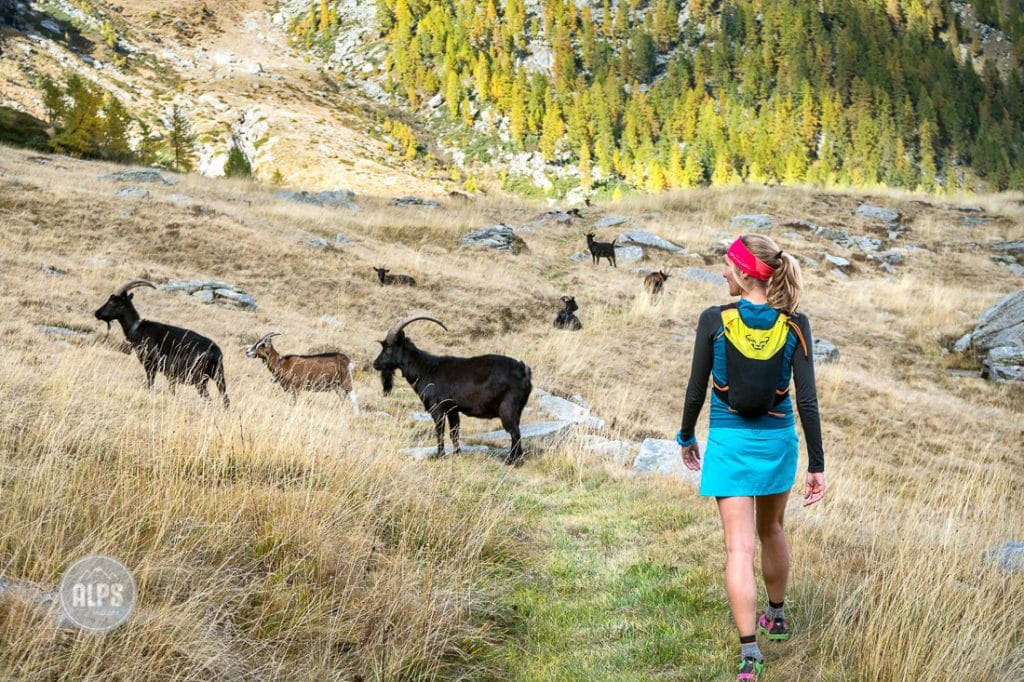 Goats galore along the trail to Monte Zucchero! 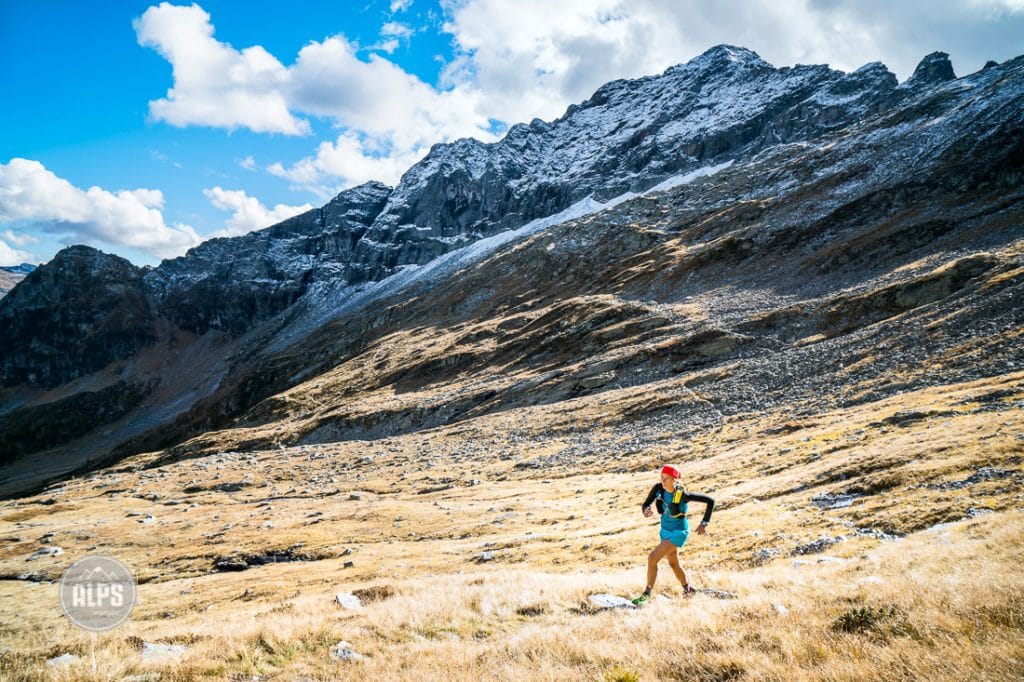 The last flattish trail before the big, steep push to the summit ridge. 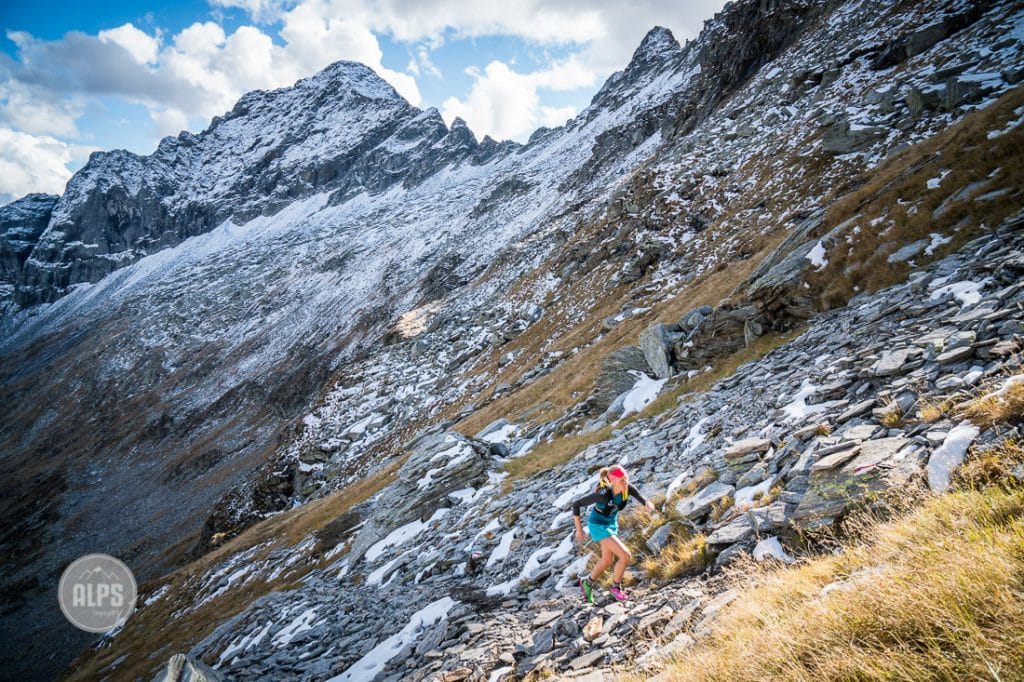 Warm day, cold landscape as we got up high to the ridge. 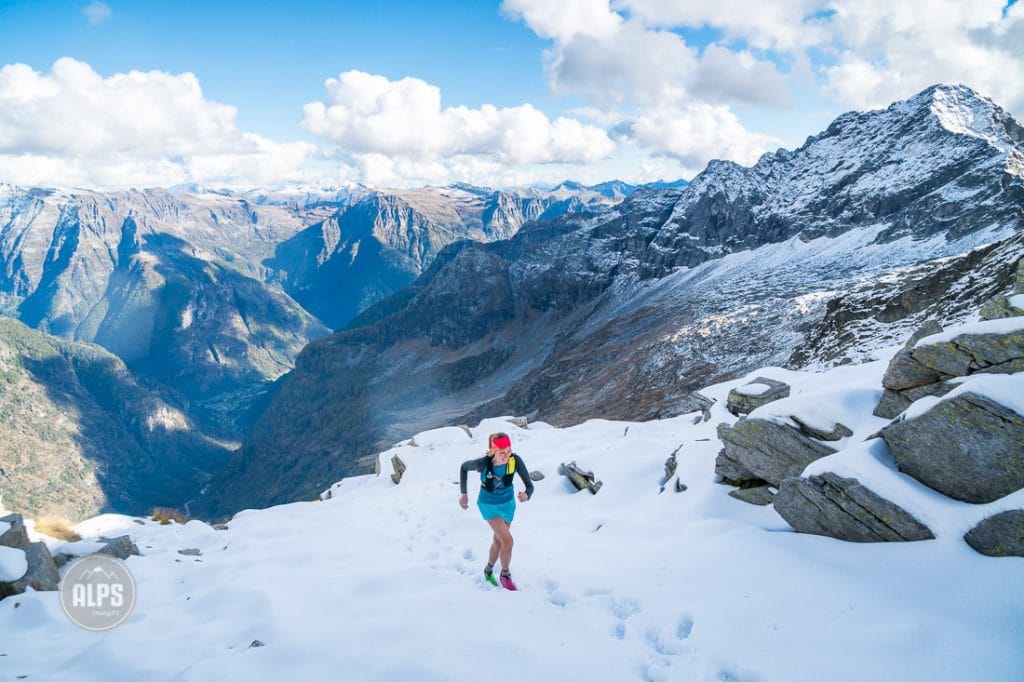 The last meters before the summit ridge. 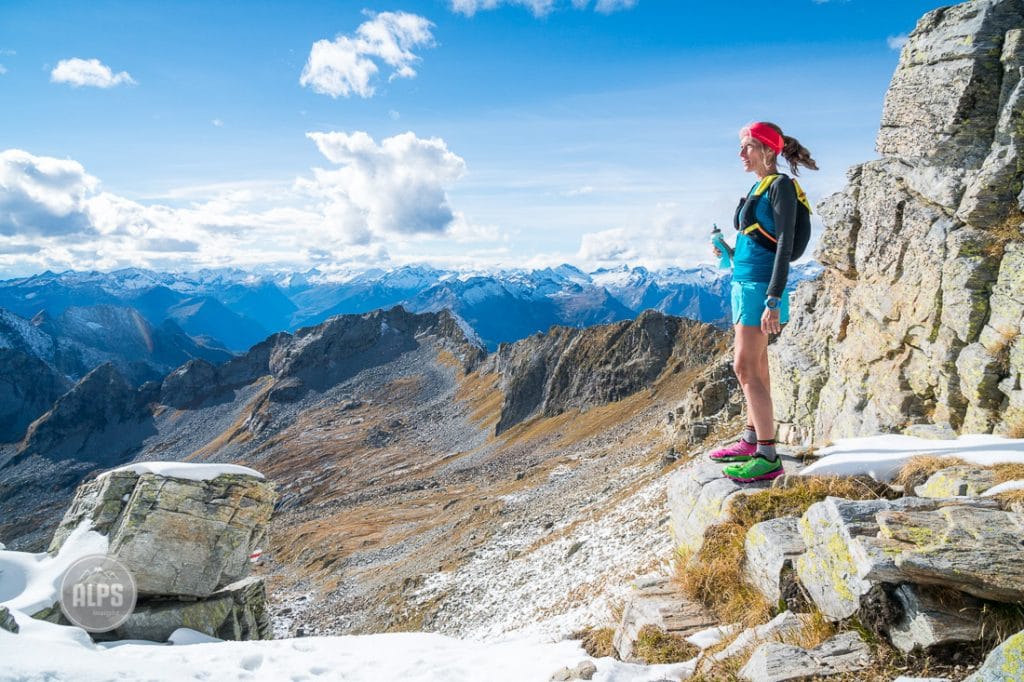 Kim arrives to the summit ridge, happy to again be in the sun. The way down would not be the same way we came up, but instead down the west side, or the background of this image. 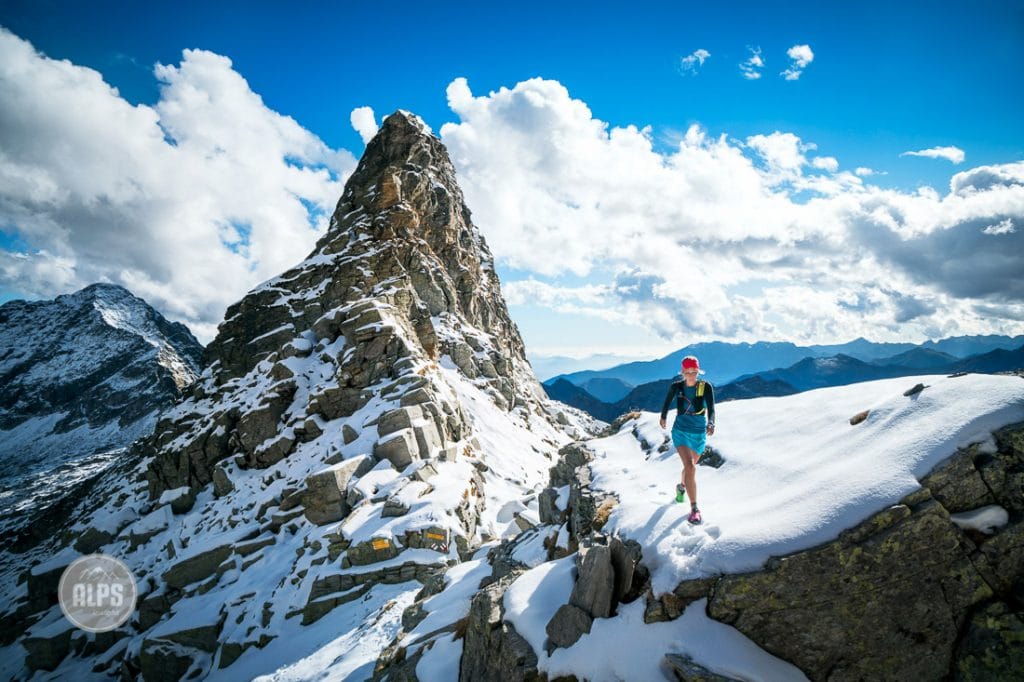 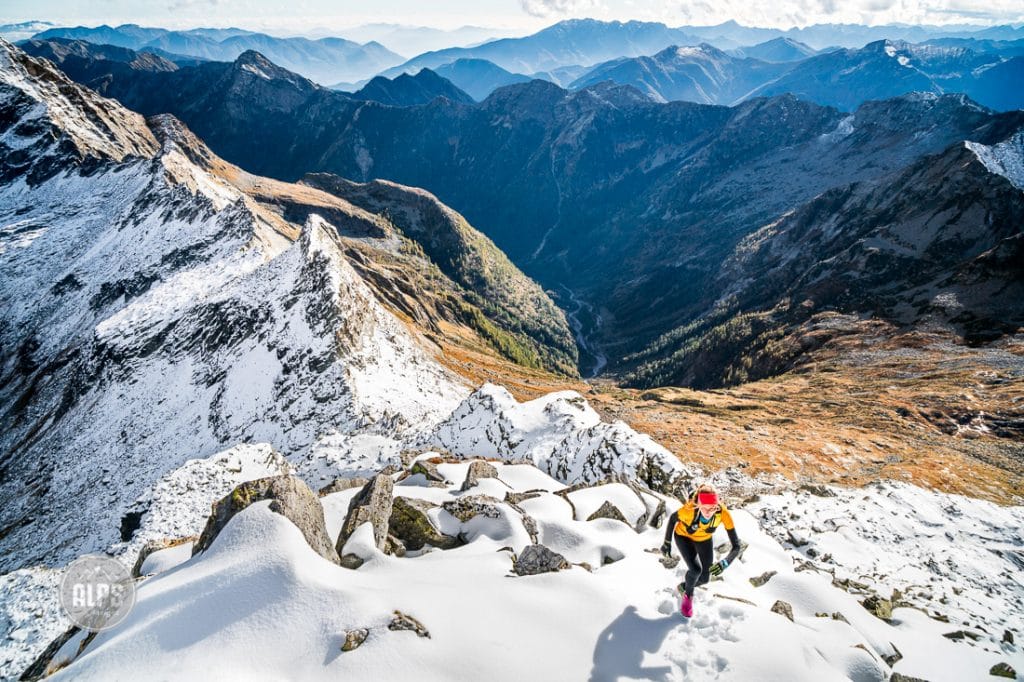 The last meters to the summit. We came up on the left side and we’d go down on the right, deep into the valley below which terminates in Brione, in the Val Verzasca. 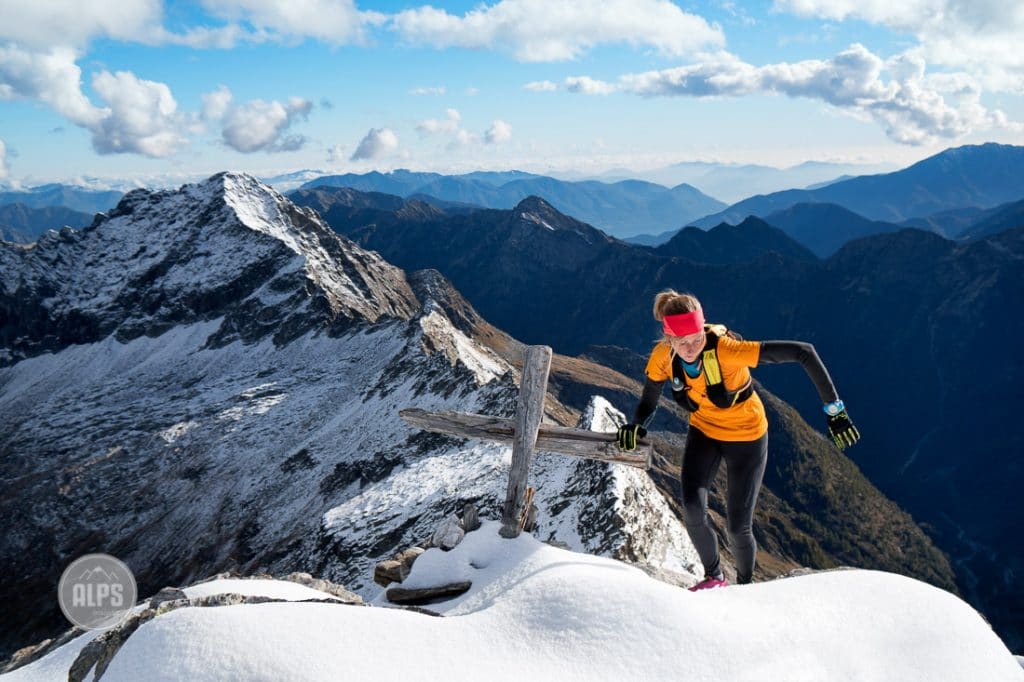 Monte Zucchero’s summit, the best possible end to our Way Up project this year.