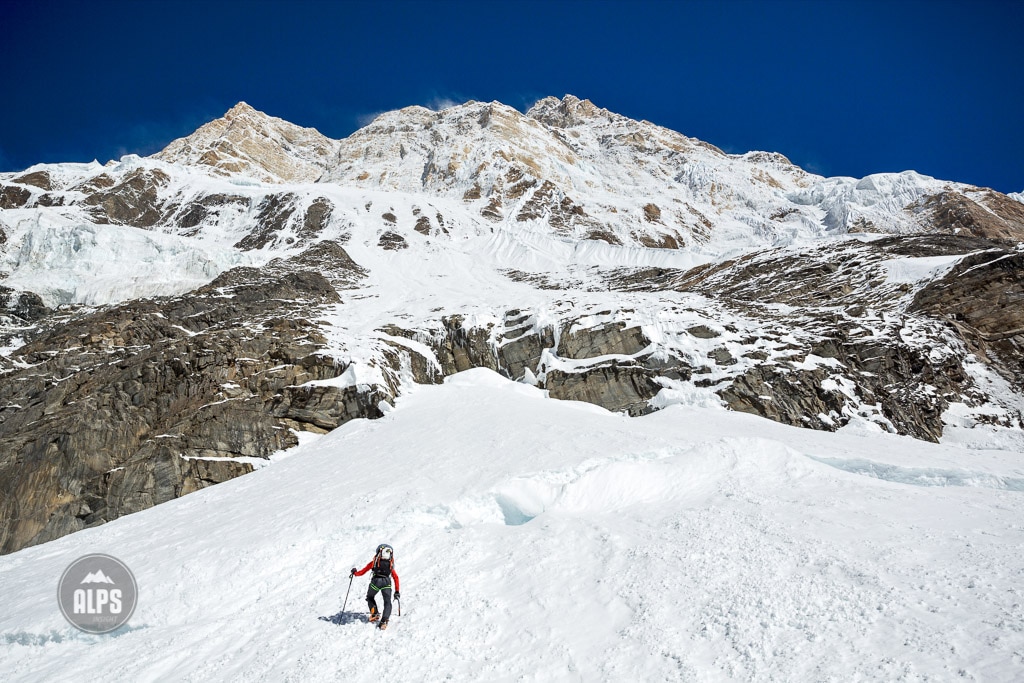 Ueli… My first thought upon waking.

3000 meters of rock, snow and ice greeted me as I unzipped the tent door. The massive wall was cast in deep blue without sun and towered so high I had to poke my head out of the tent to see the summit. Ueli’s friend Tenji Sherpa stirred next to me, so too Janine. Immediately, Tenji’s face joined my own and together we took in the wall as he announced, “My dream was that Ueli stood on the summit last night.”

We scanned the wall starting at where we’d last seen him the night before. My eyes searched the rock band where I assumed him to be, but there was nothing but ice and granite. Then, as the morning’s first light moved down the face, a line appeared on the final snow slopes. From near the summit I followed it down to where it began, exactly where Ueli had hoped to exit the wall. “Tenji, is that a track on the summit? Wait! There… Ueli is down climbing!”

Just below where camp 2 would have been, a tiny dot was moving down the very open face of snow we had watched him climb the day before. We burst out of the tent and yelled for the others to hear, “Ueli is on the way down!”. Don and Jonah’s tents zipped open and groggy faces appeared to begin their own search.

The morning routine was started; Water was put to boil, bags were packed, Ueli’s favorite foods prepared. We would go up the glacier to meet him. Then excitedly, Don announced, “I got a message from him last night, it says, ‘I am back in camp 2. Long night climbing. I am descending after some food.’”

But the one question remained… Had he summited?

Not 24 hours before, we had all stood at the base of the South Face of Annapurna. Ueli was ready to climb, but how high, none of us knew. I could see he was in a different mental place, more serious, focused to begin something so severe there are only a few on the planet who could even contemplate such a thing; To solo an 8000 meter peak via a new line, with only a small pack, and without oxygen.

We shook hands, four cupped, bro’ style, and he started up. For a few moments we watched him move away, climbing in his typical manner of focused precision and even movement. We began our descent and for a time lost sight of his progress. Finally, once back in the open we found him. He had moved past camp 1 where he said he may stop to acclimate. Clearly, he had other ambitions.

By the time we reached our advance basecamp he was nearing what would be camp 2. Strong winds now buffeted the face and spindrift was running like rivers with Ueli between on a sharply defined flute. Huge plumes of snow blew from the face obscuring him from our sight. Through a 1000mm lens we could watch his every step. We paced camp like first time fathers in a waiting room.

Ueli arrived to the rock band just as the day’s last light left his position. Here the wall was both steeper and more exposed to avalanches. The late afternoon had brought increased winds and building clouds. The curtain fell on a great performance, Ueli was gone.

Then, just before nightfall, it cleared and we again found him, but he’d descended about 150 meters. Through the 1000mm lens we could clearly see him digging a snow cave, moments later he disappeared into the face itself.

Night fell, the show was on hold.

As we trudged up the glacier to find Ueli I thought of this man who has become my friend. For the last year I have watched him in his endless training and preparation. But once in the Himalaya, I could see he was in his own arena, and he was rising above even himself. In less than three weeks at Annapurna, he had been able to maintain continual progress to achieve his goal. Then, with a window of weather and opportunity, he was unflinching when it came time to pull the trigger and get it done.

Lost in my thoughts about what we were witnessing, I finally looked up to see a lone man moving quickly down the glacier. I stopped to prepare my camera and when I again looked up he was hugging Tenji, everyone was laughing and I could hear him clearly say, “Now we can go home early.”

That answered the question about the summit. But also, it confirmed that it was not only Tenji’s dream that had come true. 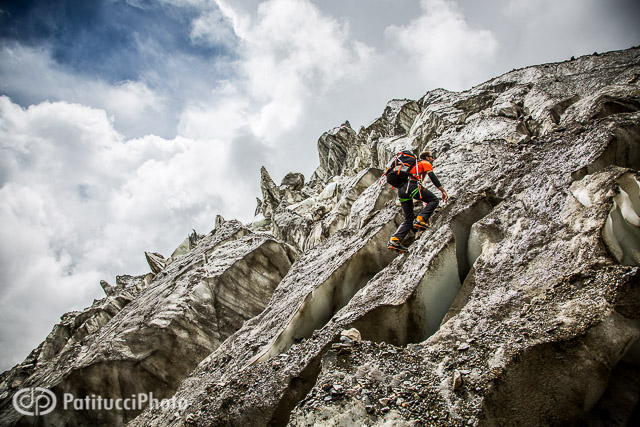 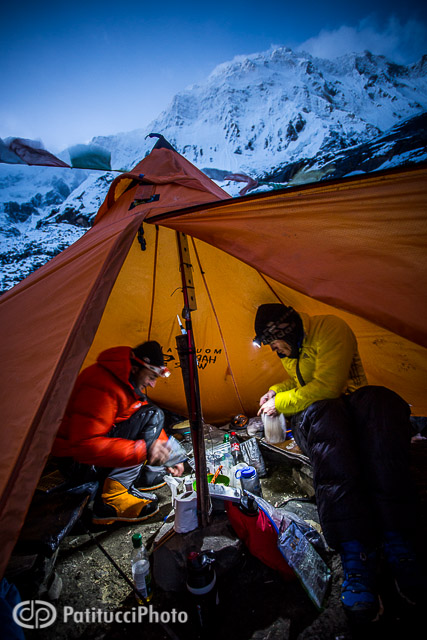 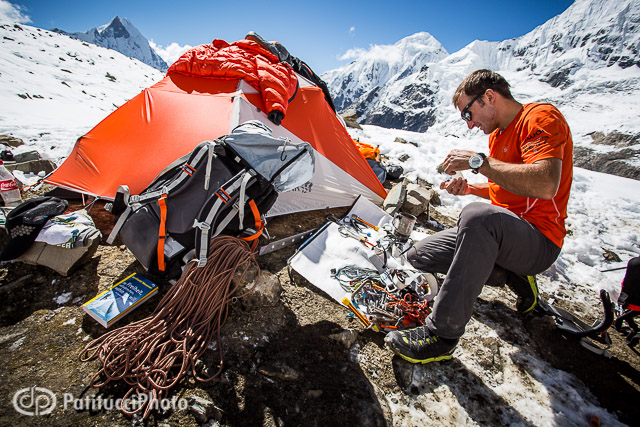 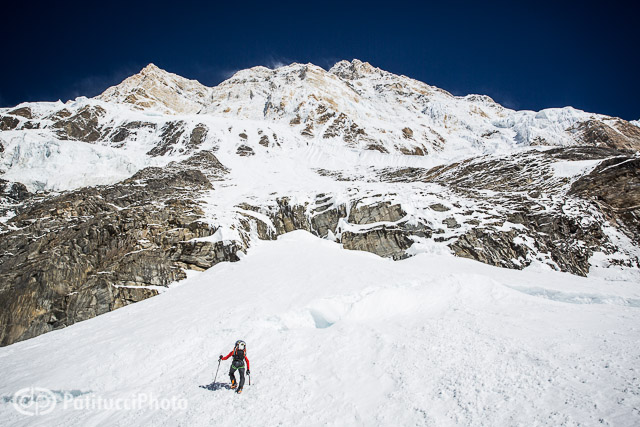 Ueli starting up the south face of Annapurna. 2500 meters of steep snow, ice and rock 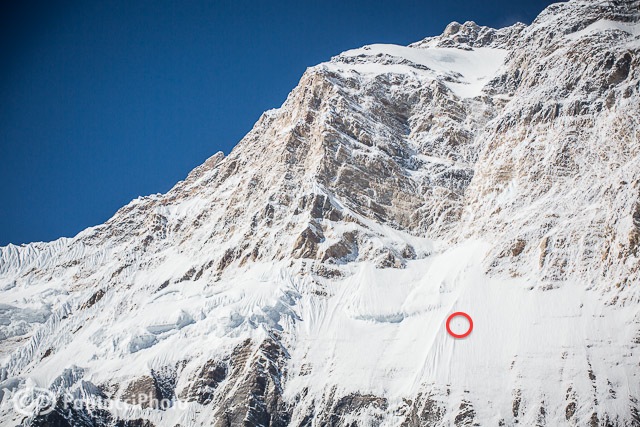 The view from advance basecamp, Ueli is just visible on the snow slopes leading to the giant rock band. 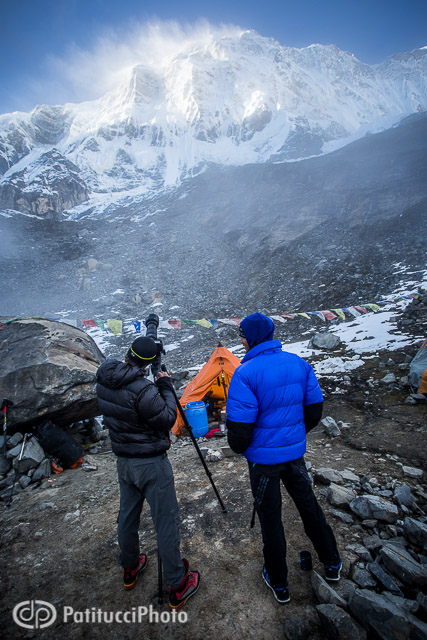 Don Bowie and Jonah Matthewson keeping an eye on things 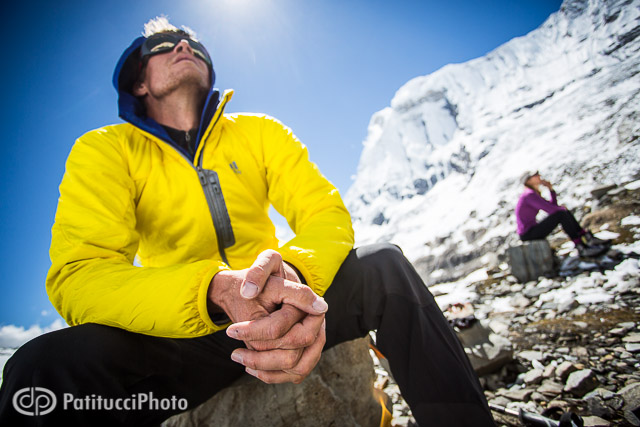 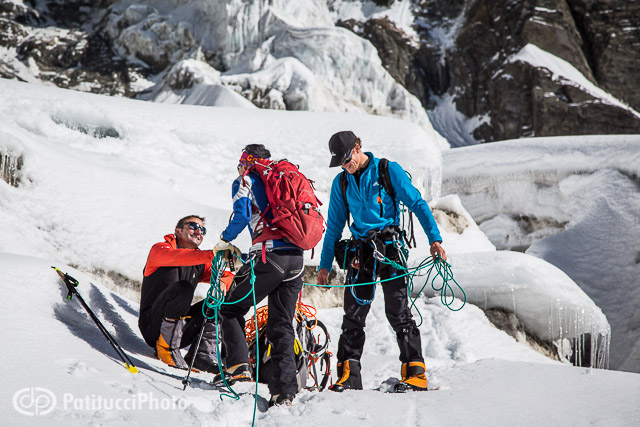 Tenji Sherpa and Don Bowie with Ueli where we connected on the glacier below the south face. Tenji was with Ueli in 2012 on Mt. Everest when they each summited without oxygen. 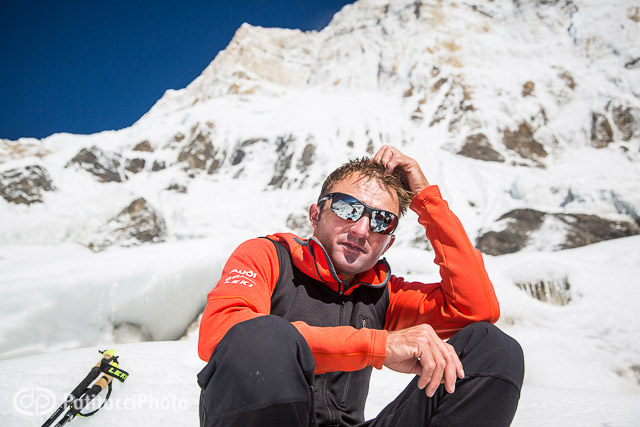 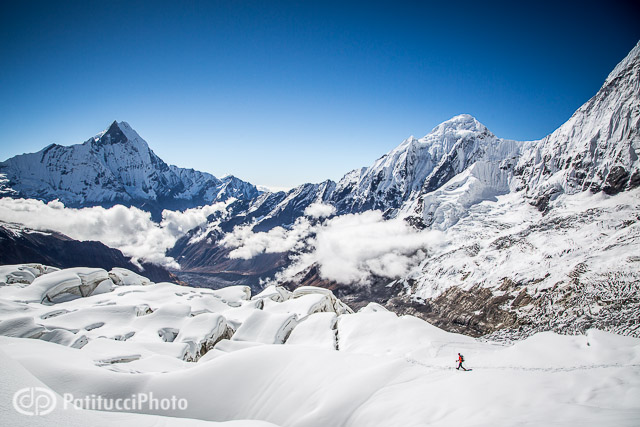 Ueli headed down the glacier and back to advance basecamp 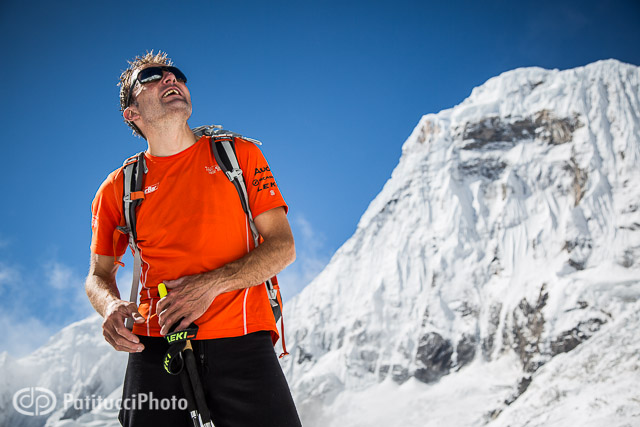 This is only one part of a much bigger experience. For the whole story, and in Ueli’s own words, be sure to check in at Ueli Steck.

A huge thanks to the incredible team we found ourselves a part of. Don Bowie (climber), Jonah Matthewson (videographer) all our Nepalese friends who supported us in every way, from Basecamp management to carrying loads to ABC, and especially to Ueli who offered us this opportunity to be a part of something so special.