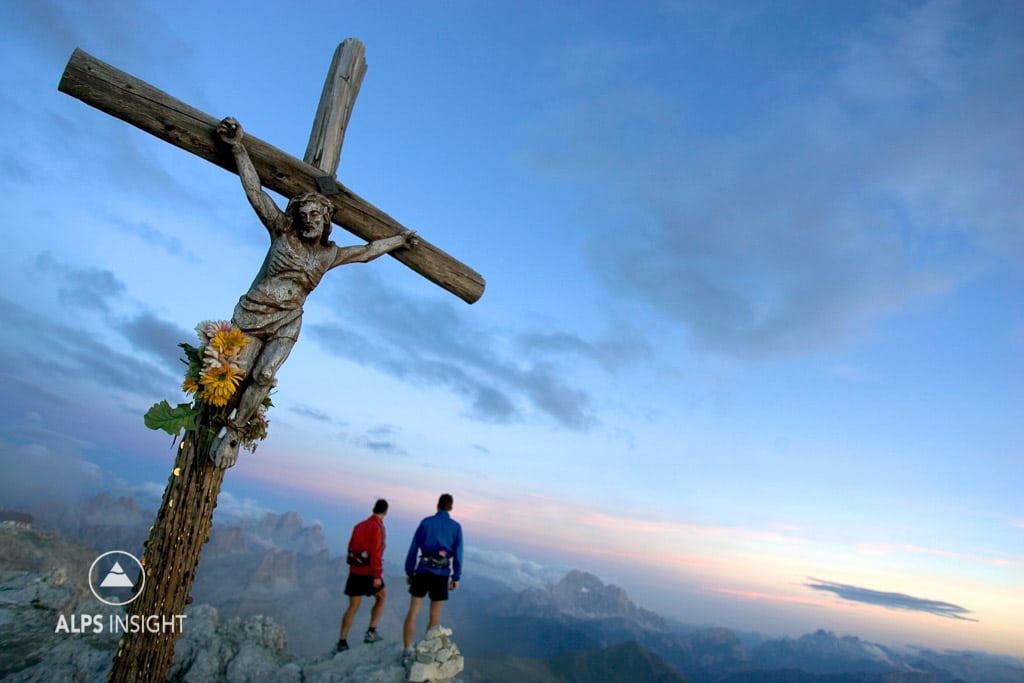 He’s always keeping a sharp eye on things, and there’s no hiding.

I was raised a Catholic school boy, trained to feel guilty for nearly everything I did. At some point I began to drift away from the church, my drifting turned to speeding and soon confession and guilt were items I’d left in my wake thanks to opening my mind, traveling, and the discovery of all the diversity of life.

But one memory still residing in my head is the eyes of the Christ figure hanging high in every classroom. No matter where I sat in class and no matter what I did, those eyes were on me. Christ on the cross is found most everywhere in Italy, trail sides, the random yard, in town, and even on summits. I still occasionally gaze into his eyes and wonder if I am living right. Mostly, I smile and give him a wink.

And so today, as I rode my bike by a little scene outside a small chapel with the obligatory crucifixion, I joined in on scrutinizing what lay below.

My ride started just before noon, Saturday. As I so often do, I wander from town on a lazy road that winds its way through farmland. Where the road crests there is a tiny chapel sitting entirely alone and receiving sun all day. Outside is a bench optimally facing south – a perfect place to sit and soak up the warmth. Today, an older couple was just making themselves comfortable as I pedaled by.

A loaf of bread, some cheese, a tomato, and an influential bottle of wine. Our eyes met, smiles exchanged, and a pop of the cork sent me off down the small descent. In Italy, this is a scene run across countless times each day.

Two hours later, returning to town, making my way back up the hill, I noticed that the couple was still in place, but in a decidedly different condition. He was laying on the bench, with his wife’s lap serving as a pillow, she was sprawled out, topless, and enjoying the rotational massage her husband was offering. The wine bottle, having served its purpose, was cast aside.

As I approached, I felt little shame in having a look. That is until I peered above them, when I regretfully made eye contact with Christ, hanging there outside the chapel. I held his eyes for a brief moment before his own gaze was redirected, almost approvingly, back down to the spectacle beneath him. God almighty, the things he must see.