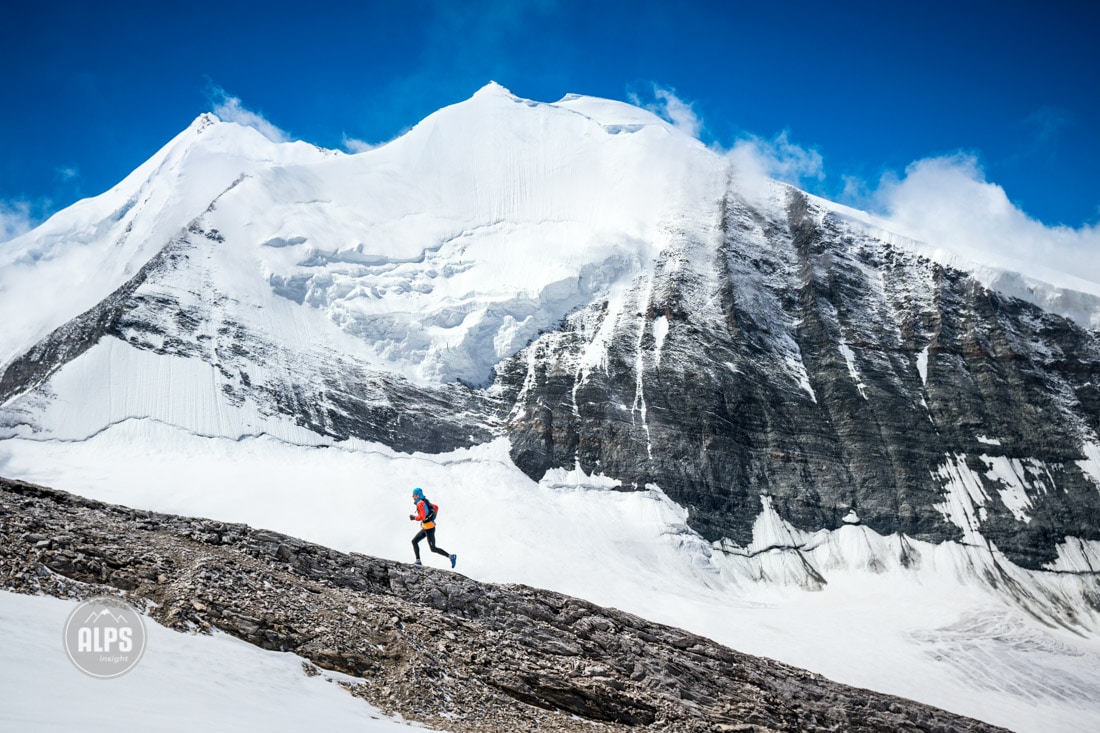 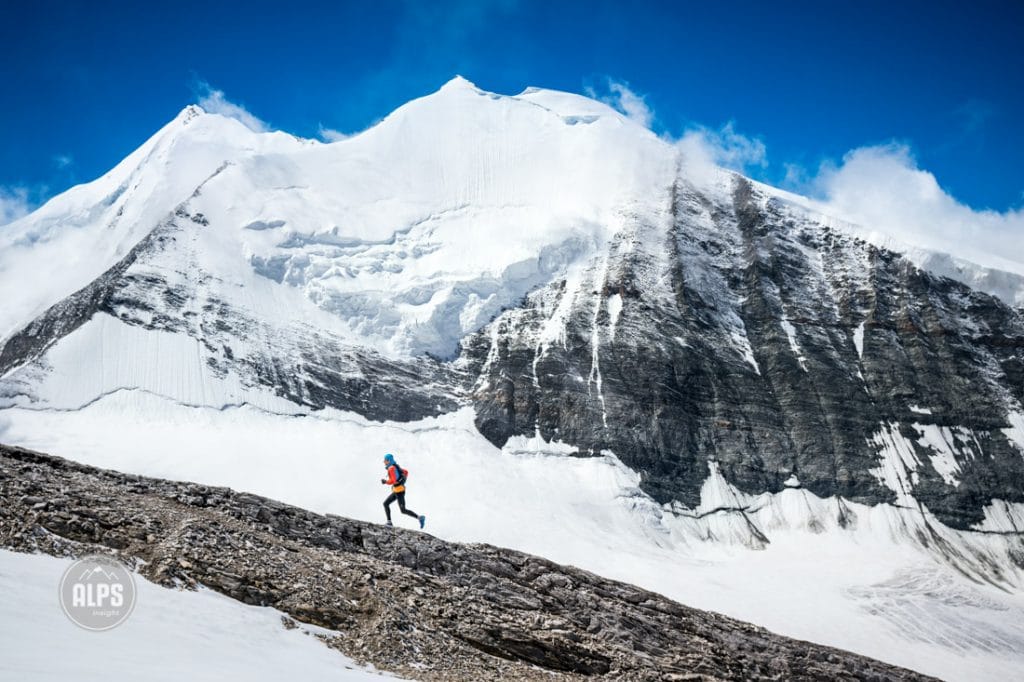 When you arrive to the summit after climbing the Üssers Barrhorn, at 3610 meters, you have reached Switzerland’s highest point accessible by an official trail. But this won’t be what’s on your mind. Instead, you’ll be processing what you are standing amongst; flowing glaciers, towering peaks, and perfect views of some of the biggest peaks in the Swiss Alps. The phrase, “This is incredible”, will most likely be uttered. One by one, we all said it.

The journey to this point is equally dramatic. The starting point is from the Turtmenntal, a quiet, remote, dead-end valley immediately west of the hustle and bustle of the neighboring Mattertal, home to Zermatt and the mighty Matterhorn. While driving up the Turtmenntal it’s fairly unlikely you’ll see anyone else, it’s also unlikely you’ll see any big mountains. You might even have some doubts. But once you start walking at the road’s end things will unfold in front of you that will have you very happy you made the journey for Switzerland’s highest trail. 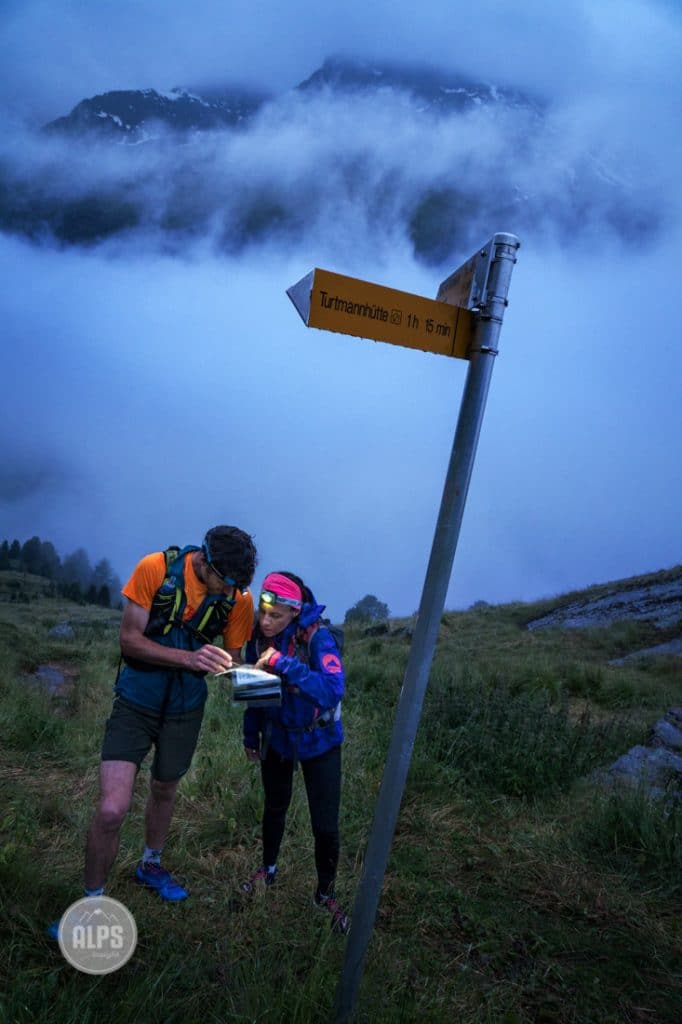 As our morning downpour comes to an end, Alister and Mara consult the map.

For our own day on the Barrhorn, we left the car at 5 a.m. in the dark and pouring rain. In typical Swiss fashion, the trail rises steeply from the first step. Then, after just 450 meters of gain, the trail flattened out, we could run. And it kept going, and going, and going until in the first grey light of the day we arrived to the Turtmann Hut. The rain was easing off and only the water dripping from the hut’s roof made any noise. We stood outside the hut tempted to enter for a cup of coffee. Instead, with the clouds beginning to drift apart, we continued up. 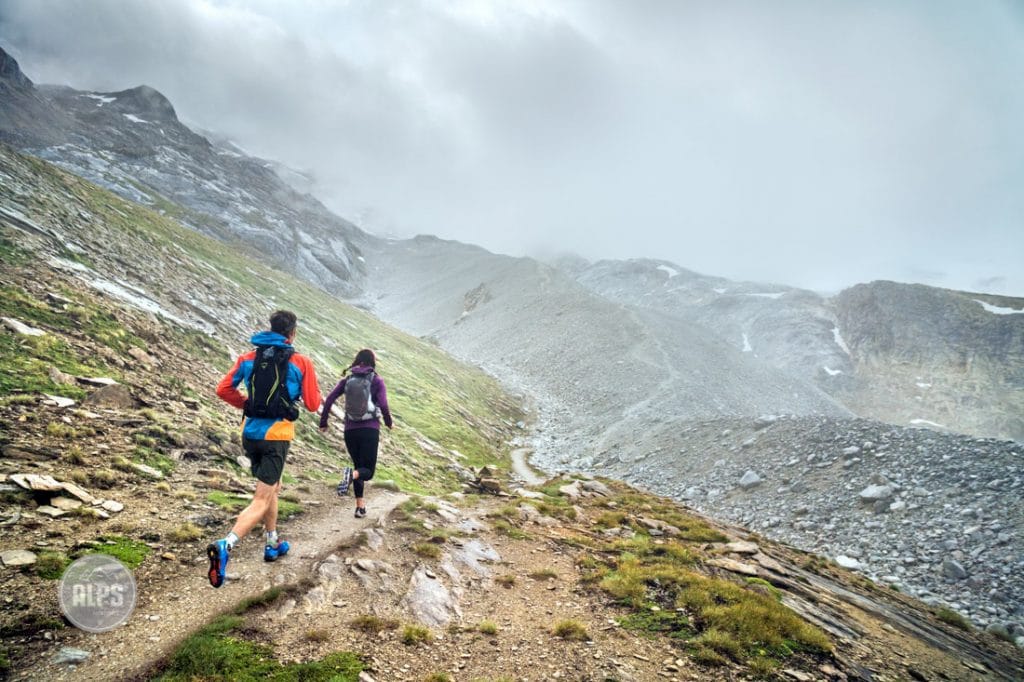 Just past the Turtmann Hut the trail leads to a moraine and for us, up into the clouds.

Soon we found ourselves on a moraine that led to a long, steep ramp and finally to a saddle split by a chasm. The rain had stopped but the clouds had darkened, and here at 3300 meters it was beginning to snow, on August 1. While the snow was building up, even deep in some places after a full night of weather, we could still see the line of the trail. Thanks to the “highest trail in Switzerland” tag, we weren’t alone. Those who had spent the night at the hut were already above. We jumped in their tracks, gained the lower Inners Barrhorn summit, descended again, and finally found ourselves on the true Üssers Barrhorn summit. After a morning of heavy rain, driving snow, even periods of sun, it was time for thick fog – we could see nothing. 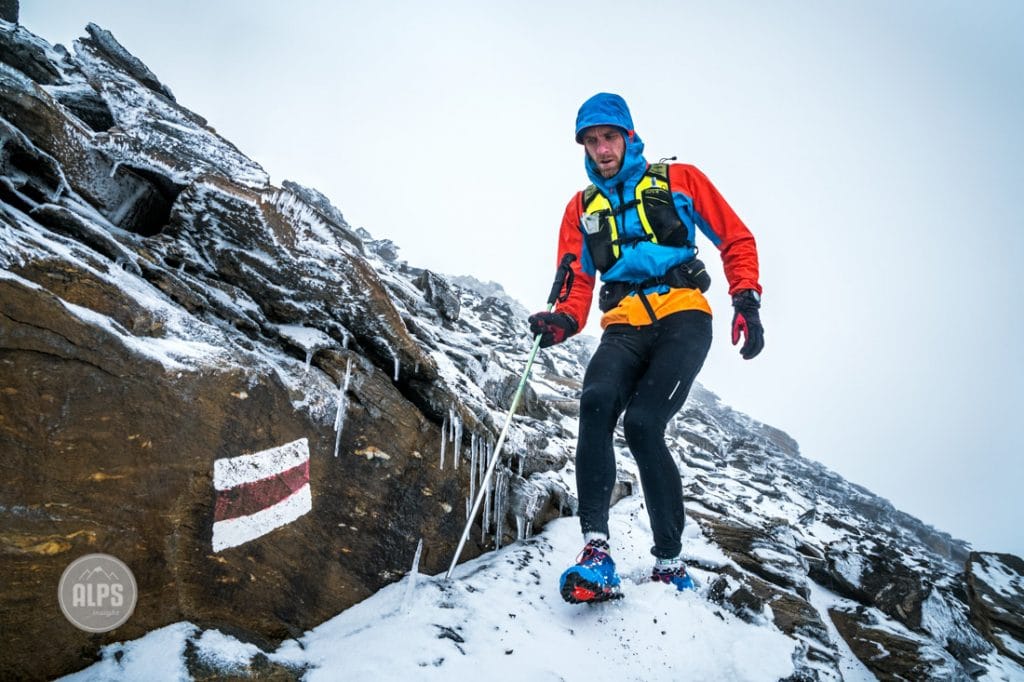 Alister on the cold & snowy traverse from the Inners Barrhorn to the main summit of the Üssers Barrhorn.

But we did smell cigarette smoke. On top was an older couple who assured us, “The mountains are out there”. So we joined the older folks, an affectionate young couple, and a lone hiker, and put everything we brought on to help endure the wait. Sure enough, the clouds broke.

It was well worth the shivering. Immediately next to us was the entirely white, and appropriately named Weisshorn, a true pyramid of 4500 meters. Across the valley the Dom even popped out, the highest peak wholly within the Swiss borders at 4550 meters. Then, in less time than it took to read this paragraph, it was all gone. The curtain dropped, show over. 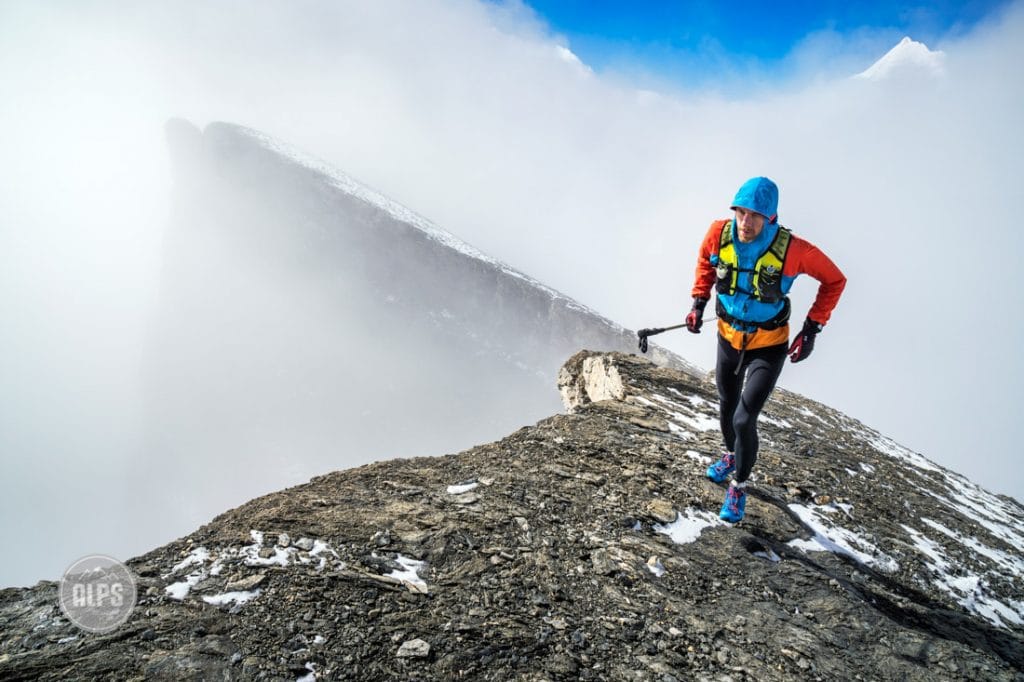 Alister nearing the summit of the Üssers Barrhorn. Clearly, we were on the very edge of the clouds, with occasional glimpses of what lay around us. The Weisshorn is just barely visible above the clouds.

Down we went. By the time we reached the saddle, it was nearly 100% sun. With renewed enthusiasm, we opted to include another small peak for a closer look at the Weisshorn. 30 minutes later we found ourselves on top of the Schöllihorn, a worthy detour. There we sat, with not a breath of wind, in the warm sun, marveling at the place that our feet carried us to, and at how quickly the weather can change. Sometimes for the better, sometimes for the worse. One thing is always for sure, the mountains are out there. 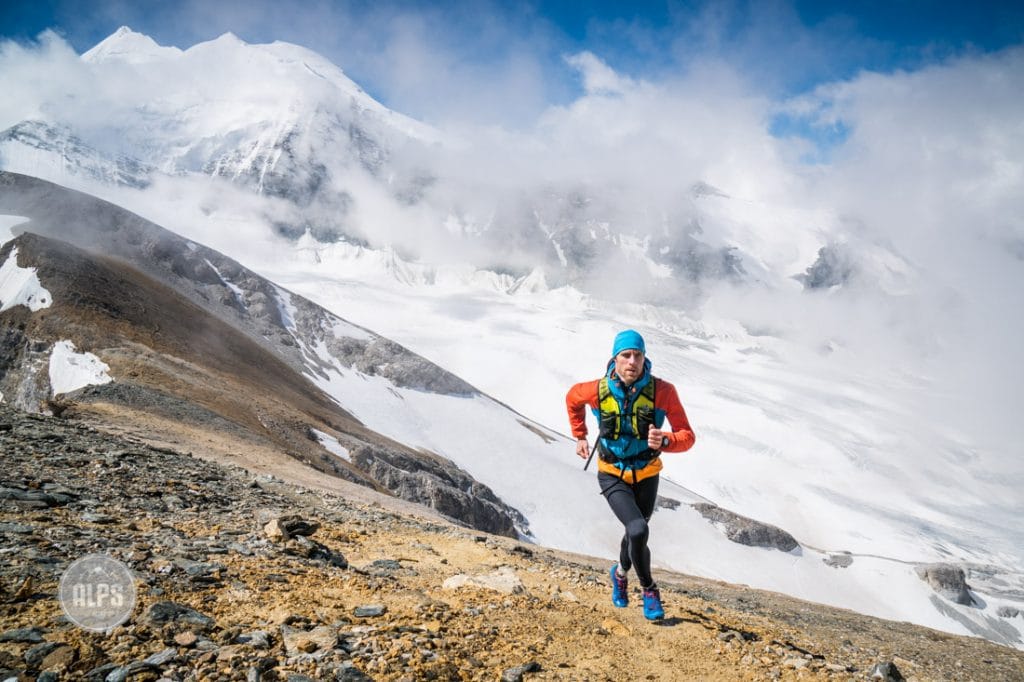 During our descent and traverse over to the Schöllihorn, things cleared up nicely and the Weisshorn and Bishorn put on a good show. 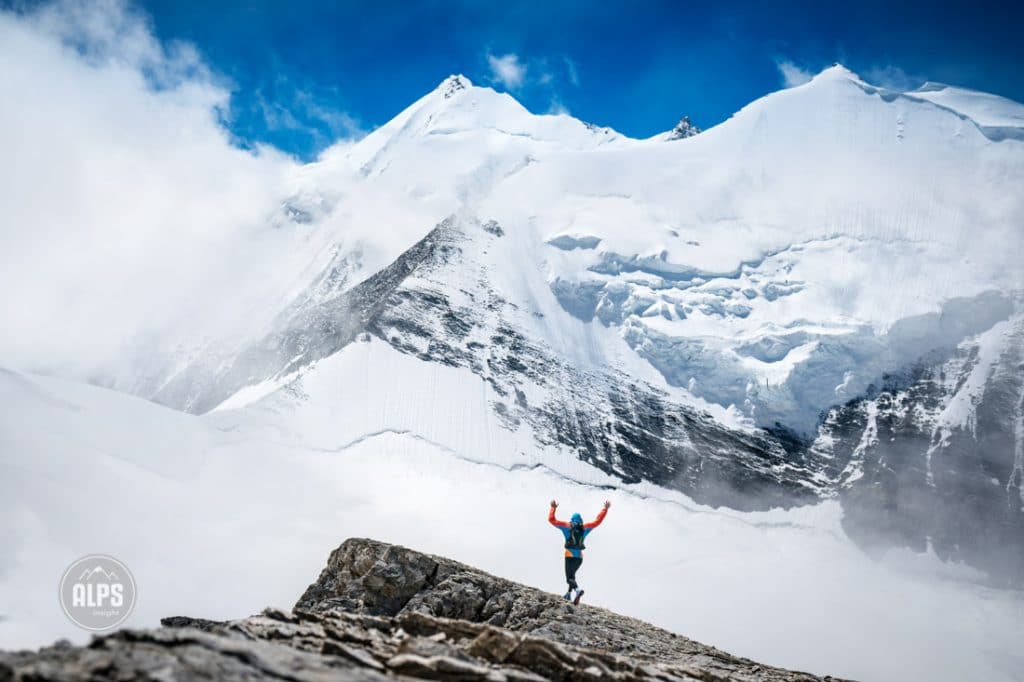 On top of the Schöllihorn, we knew we were in a good place and had gotten very lucky with the conditions. Alister starts to head down, a happy man.