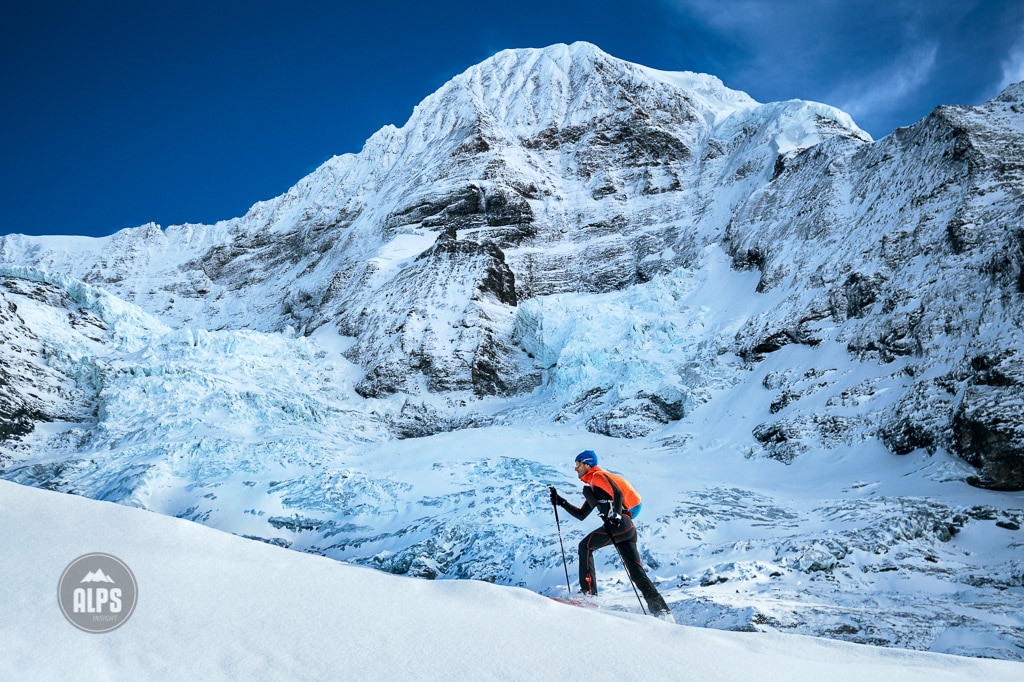 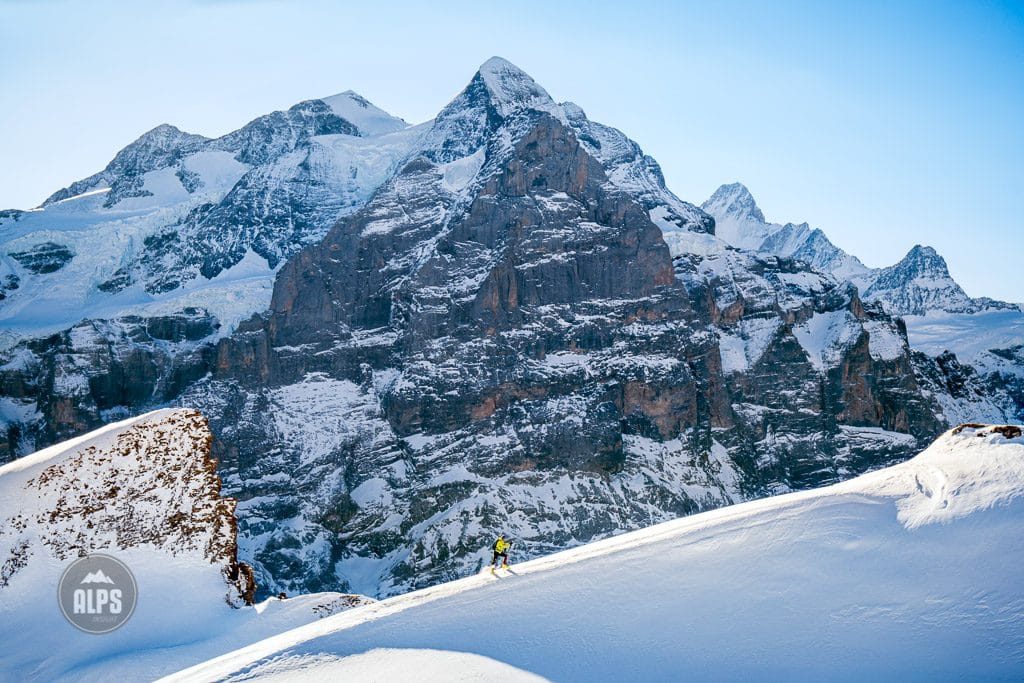 Uphill skiing? Isn’t that an oxymoron? Who skis up?

According to a recent article at Outside online, skimo is one of North America’s hottest winter sports. Apparently lots of people are pointing their skis uphill.

After ten years living in the Alps, skimo is now a regular part of what I do each winter. It’s completely normal to go for a ski and just go uphill. While it’s been great to hear of its growth in North America, I still see a lot of confusion as to what exactly it is. The other night I was cruising social media and found all kinds of posts from a skimo race in the US. Some of the lead people had the kit and gear. The rest looked like they were out for a normal tour with numbers pinned to their baggy pants. I understand it’s not the gear that makes for skimo, rather it’s the concept of performance uphill skiing. But, until you have the right gear, you are still ski touring. It’s the same as trying out trail running with your hiking boots and 40 liter pack, you’ll get the idea, but not the feel.

With this bit of info I hope to inspire people to explore the world of skimo.

Ski Mountaineering? Ski Rando? SkiMo? One source of confusion around the sport is the name. What is this sport really called? For the most part, it is neither mountaineering or touring. It’s even been called Ski Running, but this isn’t entirely true either. The governing body is the ISMF, International Ski Mountaineering Federation. To me, it’s just skimo.

So what is it? It’s basically performance-oriented ski touring with the following objectives: go uphill, use ski touring as exercise, and combine different mountain(eering) skills while on skis. Note that there is nothing here about going downhill. This may be the stumbling block for people. Most people go skiing to, well, go skiing. Skiing implies going down. In my opinion, after ten years doing this sport, and speaking with many friends about it – the goals of a typical day on skimo gear is to train, skin uphill, climb some peak, quickly do some big tour and/or traverse, or prepare for a race. The downhill part is an afterthought. If it’s good, awesome. If not, oh well.

When you remove the downhill focus from skiing, it is fundamentally a different sport. It opens up endless potential for what you can do in the winter on skis. Clearly, this sounds like an activity for a specific kind of person… uphill people. But consider this, skimo is basically trail and mountain running in the winter. And trail running isn’t just for uphill people. 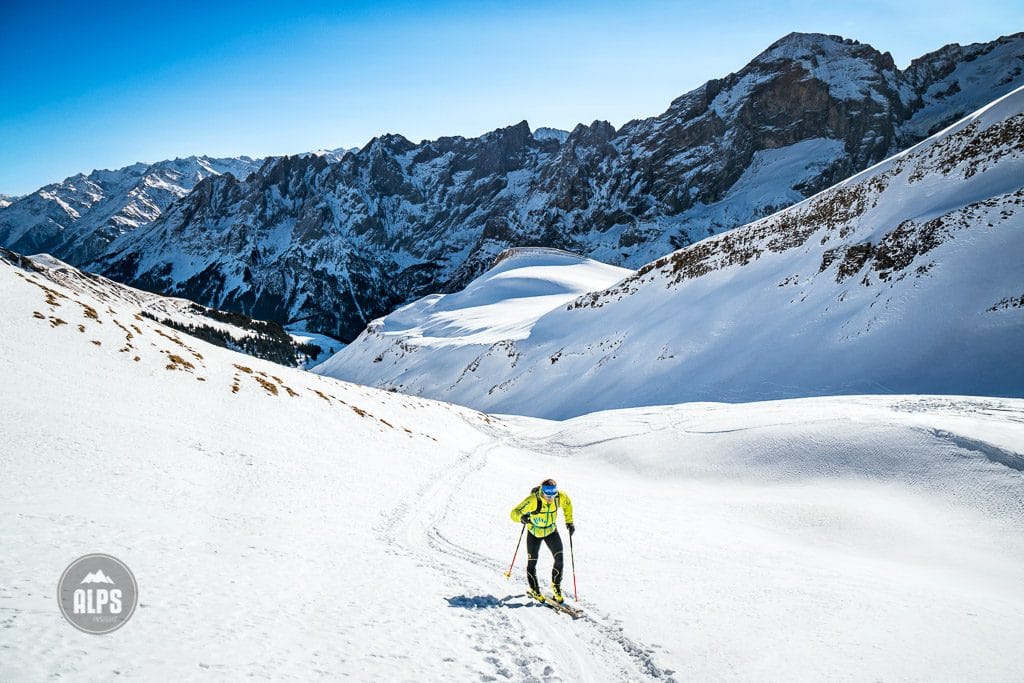 For uphill skiers, snow quality is hardly a concern. Deciding where to ski tour is often dependent on chasing the best snow, and when it’s not what we hoped for, we’re disappointed. But if you go uphill skiing… Who cares! It’s incredibly liberating. Although it should be said that when the snow really sucks, going down on those light, skinny skis can have you cursing the very existence of snow. Thankfully, with skimo, you spend far more of your time going up than down anyway.  And, if the snow is true powder, I’ve found that skiing it on skimo gear works just fine. Powder is powder, if you can ski it you’ll feel heroic no matter what you’re on.

You can go solo

Unlike ski touring, which is about getting into position to ski down some line, skimo cares more for simply getting out. If it’s the training time you’re after, go where you won’t put yourself in a dangerous situation. For many people in Europe, and a growing number in the US, skinning up the side of a piste, ideally before or after the lifts are running, is the easiest skimo strategy. In the Alps, some pistes are a highway for people skinning in the early morning hours. When we lived in the Dolomites, there were actual skimo training tracks. In the Swiss Alps, we often use dirt roads, sledding routes, and summer trails turned snowshoe tracks for quick and easy training sessions.

But you can also head for moderate mountain terrain with the intention to move through it quickly. Of course understanding where you can go solo is key, so too staying well within your limits and not talking yourself into skiing something alone where you don’t belong. 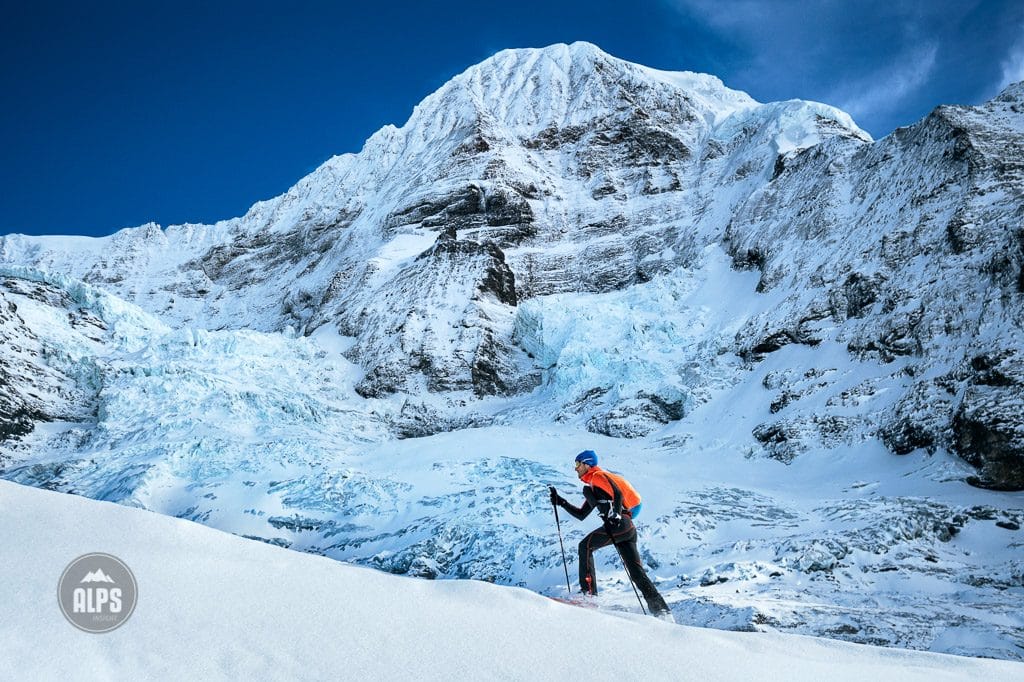 Skimo makes you fit, fast, and efficient. Thrashing your way downhill on ultralight gear teaches you to be a better skier. If you’re spending a few days a week on your skimo gear, imagine how nice it will be to switch back to the fatter skis. You’ll dial in your systems like never before because you are moving quickly with little, but the best, gear. Plus, you’ll be able to impress your non-skimo friends with 15 second transitions from skins to downhill ready (like Kilian).

Let’s face it, gear is cool. In the trail running world, people love all the techy gear that is evolving to make them faster and lighter, more comfortable, and sport-sexy. Skimo is a great opportunity to spend large sums of money on carbon fiber. While you may not be ready, or willing, to pour yourself into a one-piece lycra suit, I bet you’ll be willing to shell out cash to save 200 grams on carbon boots. Wearing some of the lightest gear made, and moving uphill on skis you don’t feel, is something extraordinary.

One of the issues I’ve heard from American friends is the lack of readily available high end skimo gear. I found Salt Lake City’s SkiMo Co and it looks like they’ve got you covered with not only the top gear, but also service. Owner Jason Borro says, “Skimo racing is still a niche in the US but it is gaining participants, especially from other endurance sports such as cycling, trail running, and Nordic skiing.” 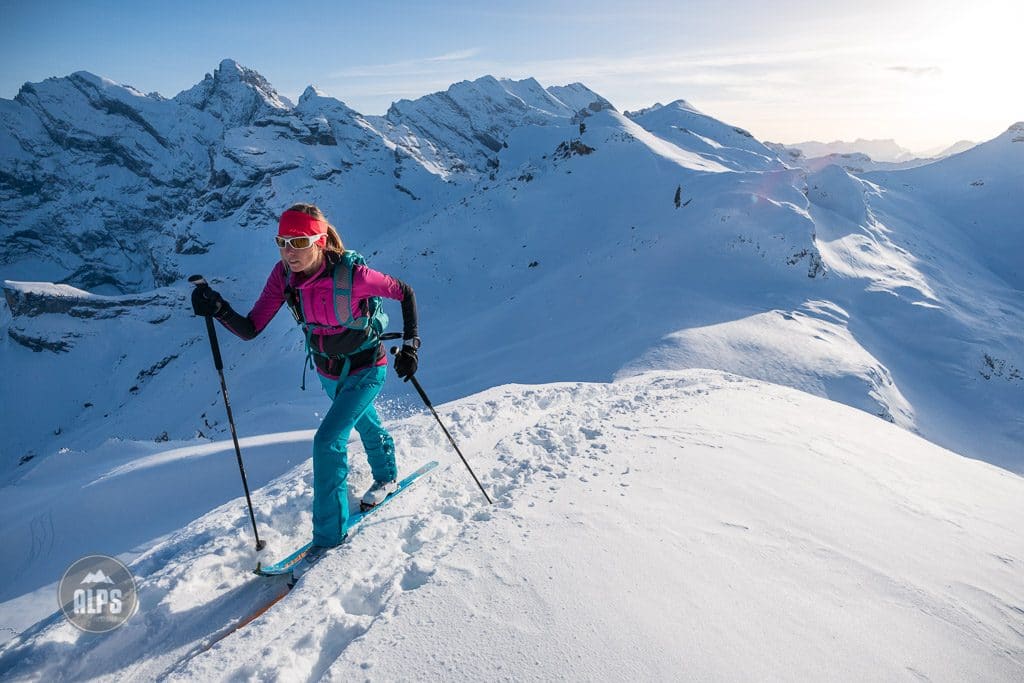 It’s often said that there is no better exercise than nordic skiing. Maybe this is true, but skimo is very similar, and has its own benefits. You don’t need groomed tracks, there’s no ticket required, and for most people, you won’t live in fear of going downhill with even skinnier skis on your feet. If you’re a trail runner, this is the perfect compliment to what you already do. After a winter spent on light gear, the transition back to running is easy. No matter how light your ski gear, it is still heavier than running shoes. Once back on trails, you’ll feel like you are flying.

Look at some athletes using skimo for other objectives. Ueli Steck used skimo as cross training for his Himalayan alpine objectives. It gave him a break from running and the pounding that comes with doing a lot of vertical. The nature of skimo allows for somewhat controlled tempo training compared to running, so the cardio benefits are huge with long efforts. And then there is Kilian Jornet who has successfully combined being the Ski Mountaineering world champion and the world’s top ultra runner. Now, Kilian is using all these skills and fitness for his bigger mountain projects. 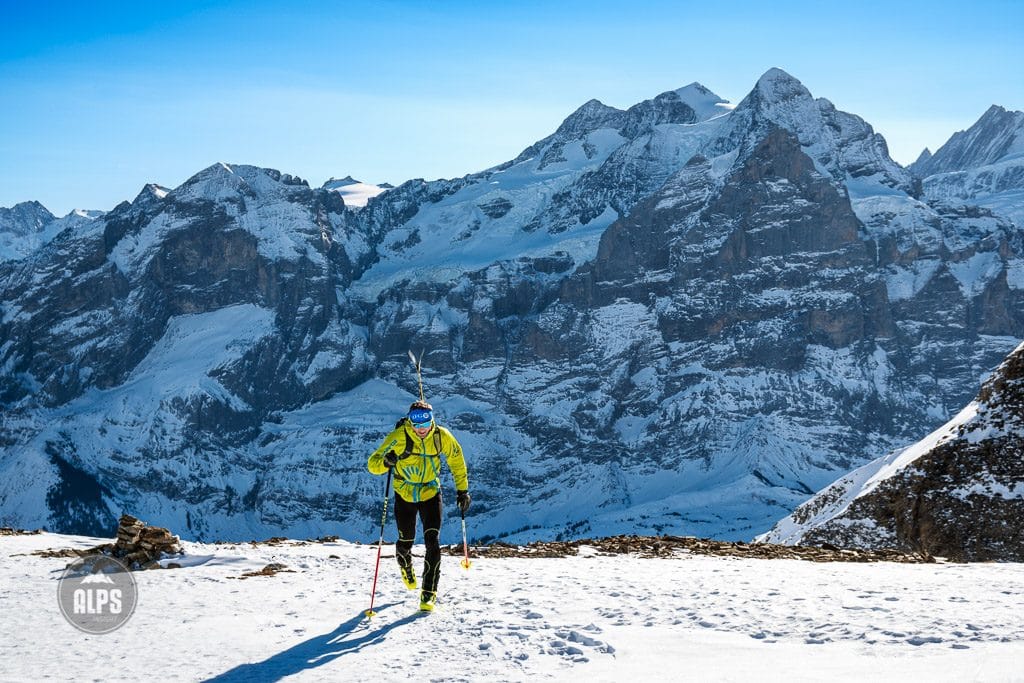 For me, moving fit and light through the mountains is freedom. As a climber, I apply my running fitness and ski skills to my mountain goals. In the summer, I enjoy running peaks (The Way Up) or running to climbs. In the spring, I can do the same on skis. I can’t think of many things more enjoyable than skinning peaks in the dark, only to time the descent just right for the best conditions.

I grew up in California’s Sierra Nevada and have skied extensively in the southern Sierra. There aren’t many more idyllic places for skimo gear than the Sierra in April or May. Thanks to the great weather and abundant high quality peaks, moving through the Sierra on skis, from sage to summits, is a dream. In the Alps, come spring, many big peaks are perfect for fast ascents. The classic five-day Haute Route has now been condensed to 16.5 hours – of course on skimo gear. In Norway, Kilian put it all together for the Seven Summits of Romsdalen, a 77km route with 9000 meters of gain, in one day! Of course you can create your own objectives with the handy combo of solid fitness and refined skills like we did on what we called the Horny Tour.

SkiMo gets you out

Skiing is better than not skiing. I have the luxury of living in the Alps, and I’m in them nearly each day. In the winter months, if I relied on a partner every day just to get out, I would go running more and skiing less. Skimo allows me to go when I want. I just have to pick and choose where I can go alone. It might be a piste, it might be a long, safe valley, or it might be a peak if conditions are right. Skimo is freedom to ski how you like.

The topic of, “why do you need to do things fast in the mountains?” often comes up. You don’t. But “fast” can be another word for feeling efficient, or even effortless. I think these are feelings many of us want. To flow through the landscape thanks to a skill set we develop is a special feeling of movement. Yes, it is a performance based idea, but maybe one that allows you to more fully experience what it is you’re doing because you have stripped away things that distract, and require your time.

Ultimately, skimo is about going into the mountains  with the expectation to move through them, beautifully.

Do you have experience with skimo? Is it going to grow in popularity? Is it of interest? Please share your thoughts in the comments section – thanks!

Why Hire a Guide?
How to Choose the Right Alps' Grand Ski Tour
The Berner Haute Route Ski Tour