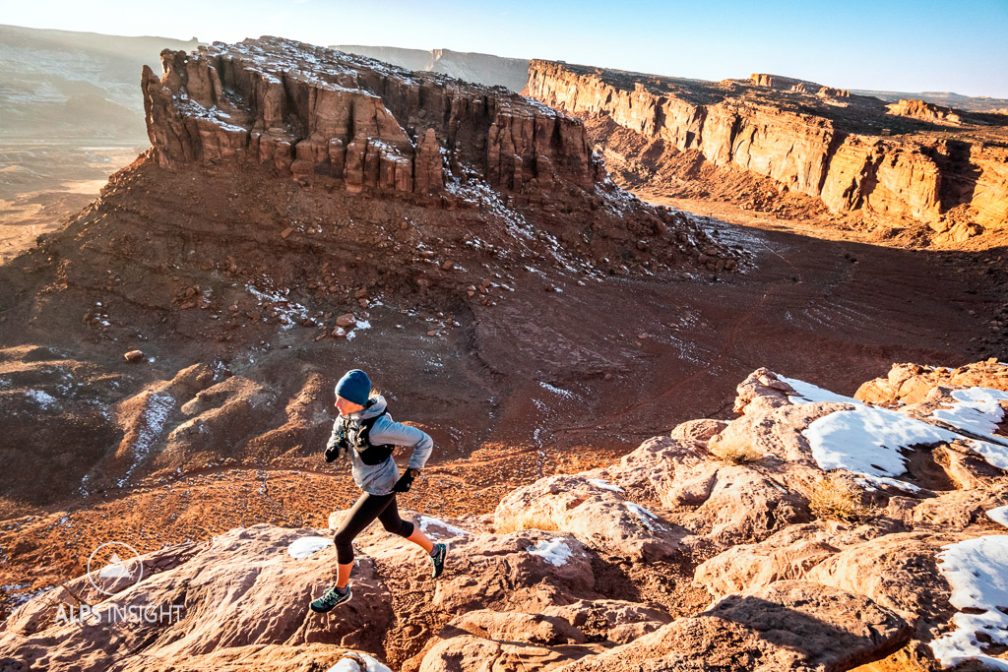 “May your trails be crooked, winding, lonesome, dangerous, leading to the most amazing view.”
― Edward Abbey

Road trips conjure up visions of sunny days and warm nights, windows down and friends jockeying around tailgates for beers, chips and salsa after a big day of trail running or mountain fun.

Our version was different. The daily high temps were not enough to thaw the 5 gallon water container, 5 o’clock was turn-in time for 15 hour nights, and COVID kept us in solitary confinement for six weeks. As a result, we were very motivated each morning to slither out of our sleeping bags and charge into the short hours of sun, where the only thing that felt normal was running around the mountains and deserts of the western US.

I was immediately on board when Kim told me her idea for a Patagonia project about her return to mountain life after a year of cancer treatment. One week after her last treatment, Patagonia approved the story, assigning us exactly what she’d proposed with the requirement that we commit to honoring all COVID regulations and remaining 100% solo.

Instead of waiting for warmer months, we decided to launch in early December as I was already due to be in the US. On December 13, we set out in a rental SUV for 6 weeks of pure spontaneity. We laughed about needing a hashtag and opted for #MAFA – Make America Fun Again. And we did just that.

I spent ten years living in Bishop, California. Prior to that, I was regularly there for ten more years. It’s truly my first love and still the place I miss most. It’s also where I head when I go back to the US from my home in the Alps. This trip was no different.

California’s Sierra Nevada always surprises Europeans. While the Sierra doesn’t have the elevation of Mont Blanc, it does have similar peak heights from Bishop south to Mount Whitney. And while we cherish our glaciers in the Alps, the dry terrain of the Sierra is conducive for moving fast and light.

In fact, the Sierra is an ideal range for mountain and trail running. But, be ready for long days. Given the time of year, and having to start very low, we found the distances just to get to and from the high mountains was always about the distance we wanted to run in total. Americans seem to love super low angle trails (here comes the hate mail!), and miles upon miles of switchbacks add up fast when you are trying to go from 1500 to 3700 meters.

Our visit was in the midst of a long dry spell. Early winter snow still lingered at lower elevations on north facing aspects, but most everything south facing, even up to over 4000 meters, was dry. We started exploring the many high pass trails, going as far as we could until post-holing turned us around. This provided us with plenty of 15-20km/1000 meter gain days.

After four days in the area, we made it south to Lone Pine where we discovered Mount Whitney (the highest peak in the lower 48 states at 4421 meters) was looking dry and inviting. We decided to go up and have a look. Our recon revealed a well traveled trail through light snow. The trail surface was hardpack and even dry wherever the sun hit.

With this knowledge, and a sunny forecast that had temps going to 16, we decided to have a go. But first we thought we’d give the trail a few more days to dry out. In the meantime, we headed for Death Valley.

I had always heard that Telescope Peak was special. I had zero idea why. It came to mind when considering options away from snow. Certainly being that it looms above one of the planet’s hottest places meant that it would be a dry trail. And, with a 3366 meter summit, would be good acclimatization.

One day after checking out Whitney, we found ourselves happily discovering that Telescope Peak was one of the best trail runs we’ve ever done. Also, one of the coldest. I never thought I’d run in Death Valley in a puffy. …Or two puffies to start.

From start to finish the trail is entirely runnable. Near the top, you’ll travel among Ancient Bristlecone Pines while having vast, surreal views of Death Valley with all its many layers of heat, brown and gold. From the top, I realized the landscape I was looking at was quite likely larger than Switzerland.

Up to this point, we had been running every day. While our efforts were never massive or fast, we did have to consider Kim’s condition. She hadn’t been in real mountain terrain for a year, and her body had been through hell fighting cancer. She’d been warned by many doctors that there’d be no shortage of surprises from what chemo left in its wake. But stoke, we discovered, goes a long way. She turned her attention to Whitney. Her first Sierra summit after cancer treatment was going to be the highest of them all.

On the first morning of winter, we set out at 6:45 with headlamps lighting the way. At the very last minute, our great friend Hjordis Rickert joined us, our one and only occasional companion during the entire 6 weeks on the road.

While drought is the last thing California needs, we appreciated it as we made our way through forest, past Consultation Lake, Trail Camp and to the infamous switchbacks. Up to this point the trail had been easy going thanks to little snow and lots of prior feet stomping the way. But now we faced a long climb in dark, frozen shadows and deeper snow. The one concern we had for the day was that our feet would freeze on the switchbacks and then never recover at higher elevation. Thankfully, with our continual movement and distracting fun conversation, this never became a reality. Instead, we quickly made our way to Trail Crest at 4150 meters where we happily pulled over the pass and into brilliantly warm sunshine. The trail to the summit stretched lazily out on the ridge beyond, almost entirely dry. We picked up the pace.

As we neared the top, Hjordis and I fell back to let Kim be the first to the summit. We watched her power away and as usual, she never eased off until she’d run out of mountain. I arrived a moment later as she stood staring off to where we’d come from. She turned to me and our eyes locked, conceding so many fears.

It took a year of angst and uncertainty. A year alone fighting a fight she never wanted. A year of determination to get her to where she was standing, on top of it all. No more mountain.

We hugged and cried, she laughed at me for the frozen tears on my cheeks. We reminded each other that there are more mountains to run.

As I heaved the frozen solid 5 gallon container of water into the back of the car I noticed that the landscape where we woke up looked a lot like the polar regions. It was 6°F and we were 30 minutes from Moab on a side road along I70. We’d called it quits late the previous night, driven along some crunchy snow covered road for a few miles, dropped anchor and burrowed into our sleeping bags.

Moab is famous for its red landscape yet we found ourselves in a whiteout. If it hadn’t been for the urgent need to get coffee in us we’d have never left our bags.

“Maybe we should have checked a webcam,” suggested Kim as the heated seats began to improve our moods. Small icebergs floated down the Colorado as we sped over the bridge and into town.

We figured it all out pretty quickly; find trails that were mostly in the sun and on more rock than dirt or sand. Anything else would be miserable in running shoes. With the daytime highs only going to 34°F, we made our trail running decisions very carefully.

Moab is one of the most fun and diverse playgrounds in the US thanks to a massive network of trails and dirt roads. Throw in some of the best trad climbing on the planet, world class mountain biking, rivers to run, a fun town to hang out in, and you have a road trip destination.

We had the trails to ourselves, and for good reason. The options were greatly limited and what we did have really was frozen. Still, in addition to some rock climbing, we managed to tick some classic trails; The Poison Spider, Courthouse Wash, Amasa Back and Navajo Rocks.

Once we’d gotten our fill of red dirt in our shoes, we decided to head back to the Eastern Sierra for a few more days of mountains before I flew back to Switzerland. Then, a call home to Janine came with the obvious suggestion we’d completely failed to consider.

“You guys should go run the Grand Canyon.”

Trail Running in the Grand Canyon

We’d each been to the Grand Canyon once before, but not for running, and so long ago we couldn’t remember much beyond the fact that the thing is absolutely massive.

Since we arrived in the night, we hadn’t yet had our minds blown by the sight of so much awesomeness. So when we ran up to the rim early the next morning, we had to take a few moments to stop “Holy Shit!”-ing all over the place. Once we’d settled down, we dropped down the Bright Angel Trail bound for the river and the South Kaibab Trail to get us out: Rim to River to Rim.

I love the line, “Expectation makes for a bad travel companion.” Running the Grand Canyon was one of the few times where your expectations come up short for how truly phenomenal it turns out to be.

Back to Bishop, California

Once we were back in the Eastern Sierra, we turned our attention to high passes. The strategy was to see how high we could get up them based on how dry they appeared from the valley; Baker Creek, Paiute Pass, Birch Lake, Baxter Pass, and Onion Valley. One by one we got denied.

We never really consider that we won’t make it when we set out on a trail run. It’s not like ski touring with potential avalanche danger, or climbing where you get shut down by a move. It’s running on trails, they just don’t change that much, we go when it’s good and we finish with the mission accomplished. But this trip we had to learn that we’d fail, that we’d be in conditions that would prevent us from doing what we set out to do. And we were good with that. We’d simply go as far as we could and appreciate the time doing what we love.

Winter, it turns out, is a very good time to roam the west. And COVID is what it is, we adjusted and made the best of it. While we would have loved to spend time with friends, it was a rare opportunity to embrace solitude and simplicity. A reminder to be spontaneous, reduce expectations, hit the road, follow the sun and eat burritos every chance you get.

For more information about these runs and destinations, we’ll have dedicated and detailed posts coming up next. Check back here or follow along at @alpsinsight

A huge thank you to the brands that support all that we do throughout the year, and for making this trip happen.

Our friends at Bishop’s Sage to Summit offer one of the best selections of trail and mountain running gear you’ll find, anywhere! And if you plan to visit the Eastern Sierra, be sure to browse their suggested trails.