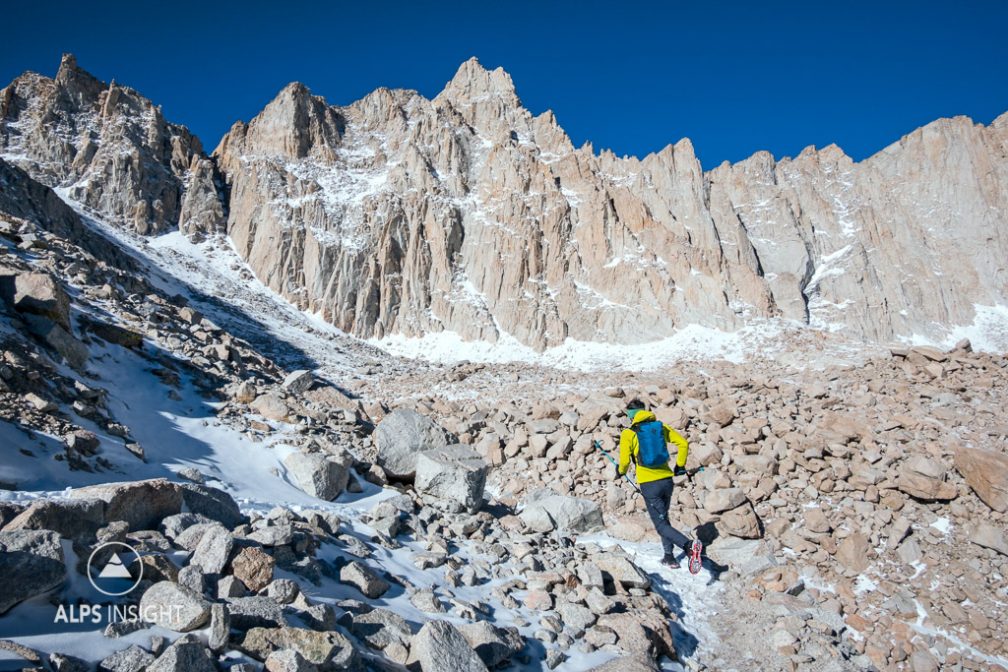 While planning our winter Wild West Trail Running Road Trip, there was nothing we wanted to do more than Mt. Whitney. Not just because it’s the highest peak in the lower 48, but because it is a really good trail run, especially in the off season when all the many tourists, and mules, are put away for the winter. But, we never imagined that running Mt. Whitney work given that we’d be rolling in to the Eastern Sierra in mid-December.

Our own time on the East Side started in Bishop, where we were shut down on most every trail we tried. There wasn’t much snow, but there was enough in the dark, north facing nooks and crannies to make things unpleasant.

As we headed towards Lone Pine, it became obvious that there was less snow as we went south. By the time we were able to scope Whitney, conditions didn’t look so bad. Whitney went back on our list.

Assuming that others had already gone up and a track would be in, we decided to do a recon mission up the main trail to see what sort of shape it was in.

Sure enough, we easily ran up past Mirror Lake to about 3350 meters. From there we could see that the switchbacks up to Trail Crest were buried in snow. Beyond that, we could only hope that the last section of trail from Trail Crest to the summit would be mostly dry since it is south facing and often gets blown off.

The switchbacks would be the crux. With almost 500 meters of snow covered trail, our concern was for our feet. Even with a track we felt like the snow would not be stomped into a nice track, instead, it would be loose and sugary, and very slow. If our feet got cold and wet in this section, surely they wouldn’t warm up above where it would be even colder.

The weather forecast showed temps were on the rise, and on December 21, the first day of winter, we could expect 16°C in Lone Pine. With some time to kill, we decided to go run Telescope Peak.

A few days later didn’t seem to make much difference in how the conditions looked. But we figured more people had gone up, further improving the trail. Best of all, the forecast was warm and still. We registered our permits online, packed our bags and slept in the sage at the base of the Whitney Portal Road.

At 6:45 the next morning we started up the trail. Neither of us had been to any kind of elevation in months, so we kept the pace mellow and settled in for our 34km & 2000 meters of vert day. Sure enough the trail was well traveled and we arrived at the switchbacks feeling fresh.

The switchbacks proved to be no problem, our feet stayed warm and the temperatures mild given the time of year. We reached Trail Crest stoked for the last section of easy trail to the summit. And sure enough, the summit ridge and plateau were mostly dry. We put our heads down and charged.

Doing Whitney in the off season has many advantages, none more appreciated than having the summit to ourselves. We spent about 30 minutes on top before our cold finger alarm sounded as a reminder that we had plenty of trail to descend.

Much of the descent is very runnable, but care must be taken on the snow covered switchbacks. Once past Trail Camp, at about 3650 meters, the trail allows for cruise control to be engaged all the way to the car.

In the end, the day was a pretty standard, although big and high, trail run. What wasn’t so standard was the summit. Thanks to endless views from its high plateau, a massive cliff dropping away to the east, and yes, it being the highest point in the lower 48, Whitney is a special one to elbow bump on.

This pile includes what we wore while running, which was actually most of the clothing. Even though Lone Pine was 16°C that day, we were pretty frozen on Whitney. Don’t underestimate how cold high elevation can be in the winter!

Some items to mention: