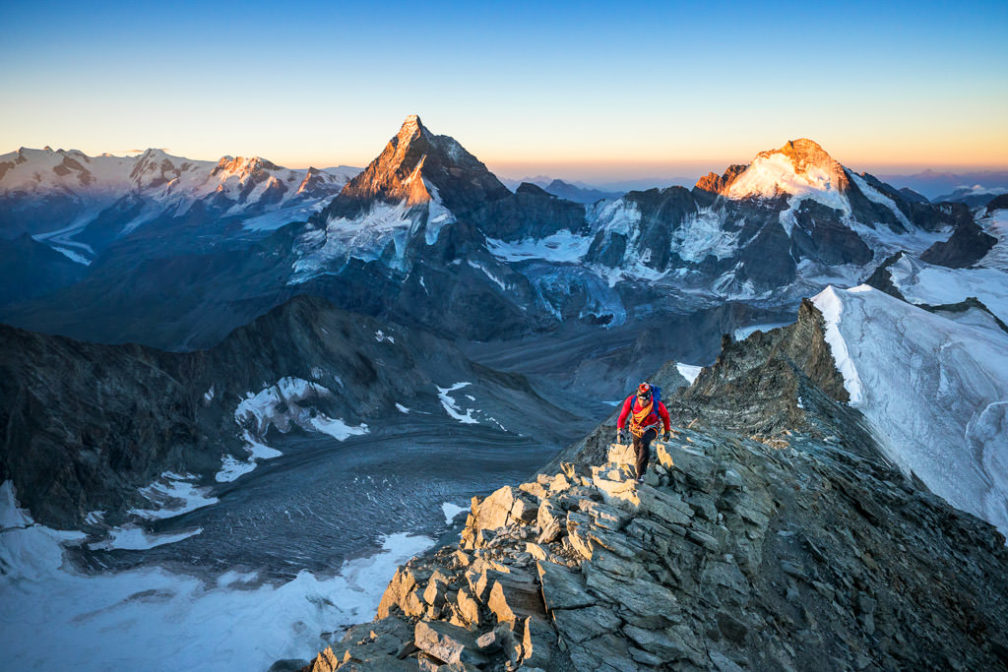 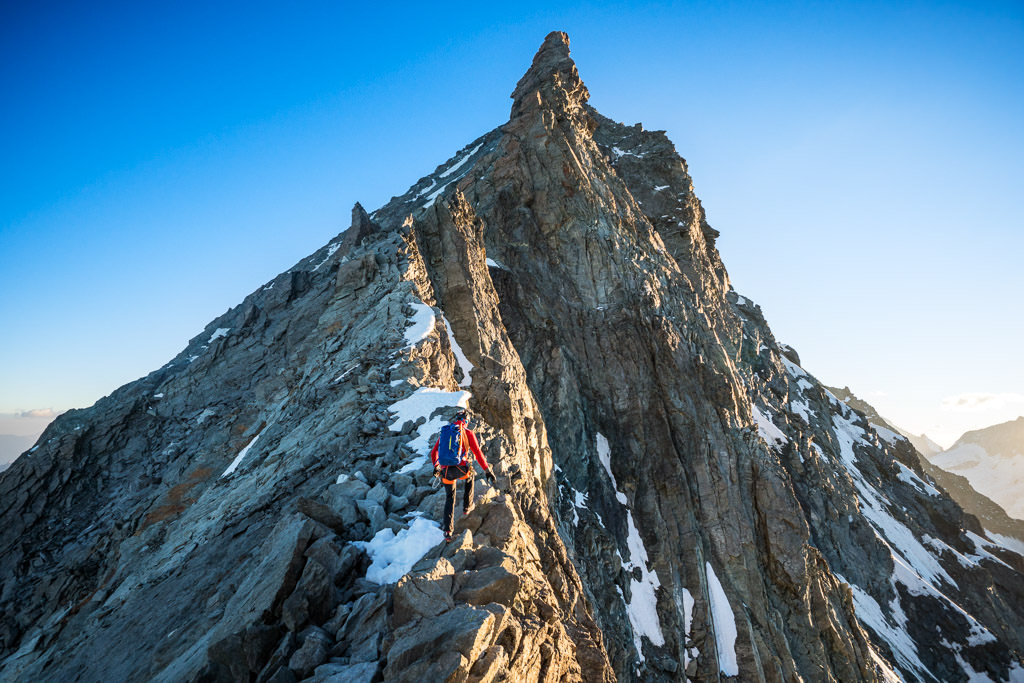 Putting it in the same league as the Matterhorn, the Dent Blanche is the kind of mountain that when seen from a distance forces the question, "Oh my God, what is that?"

But wait, it only gets better. Not only is it a beautiful mountain with a classic, high quality ridge route, the entire process of climbing it begins in a tucked away side valley of the Val d'Herens, which is itself a tucked away side valley. This remote, French speaking valley in Switzerland's Valais region is an alpine treasure with all its many towering peaks, glaciers and traditional mountain architecture.

The Dent Blanche is typically done in two days in traditional Alps style of walking to the hut on day one, and climbing and descending back to the start on day two. The trail for the Cabane de la Dent Blanche starts at the end of the road, in Ferpècle, where a 1600 vertical meter climb to the hut awaits. Thankfully, this is no ordinary climb and the alpine, almost Himalayan-like, landscape will keep you entertained and humbled by its enormity.

The hut itself sits atop a low angle, rapidly receding glacier that should be taken seriously in poor visibility. While flattish and relatively tame, it is a glacier and occasional holes may be encountered.

Parties typically leave the hut early and well before light. The rock on the ridge is very good, with the best being right on the ridge proper. A number of gendarmes are passed and serve as the most technical climbing (4b-ish) on the route. We stayed near the actual ridge crest and found great rock, but with easier alternative lines often to the left (in ascent). While we simul-climbed the entire route, we saw some parties pitching it out using both in-situ and natural anchors.

From the hut, there is about 900 meters of vertical gain to the summit. We did it in very dry conditions and were able to simply follow crampon scratches all the way to the top. Having snow, or iced rock, on the route would drastically change the experience. We took three hours in ascent and two hours down and are very experienced alpine rock climbers who move fairly fast.

Immediately after doing the route we blogged about the experience at ALPSinsight's Blog - Climbing the Dent Blanche - where you can learn  more about the peak and route.

In summary, the Dent Blanche South Ridge is one of the Alps true masterpieces and should be on or very close to the top of any to do list. 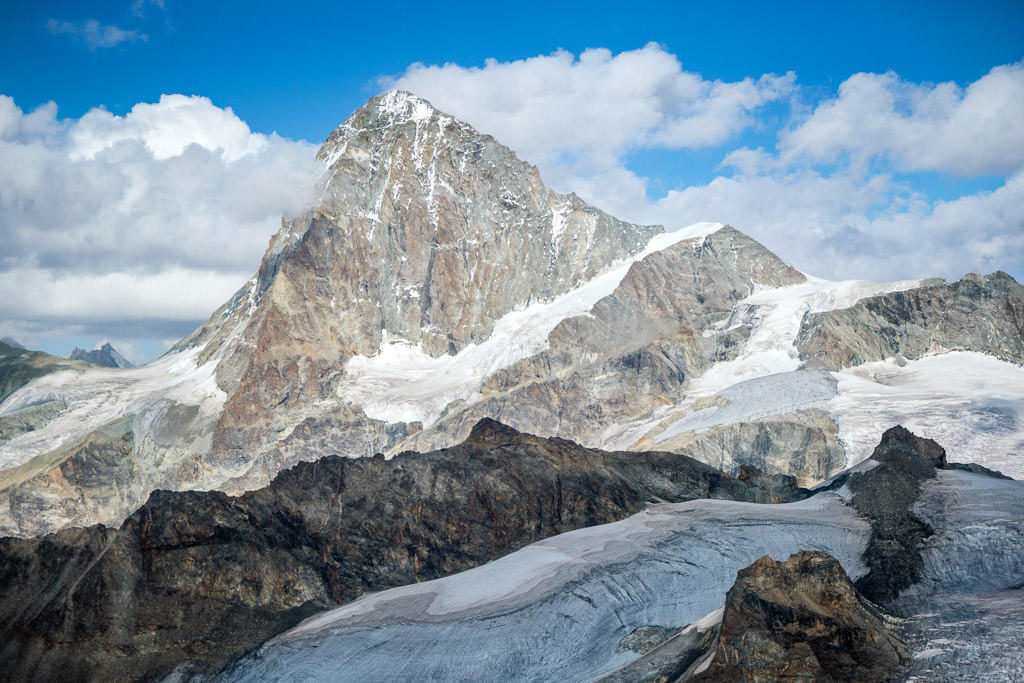 The Dent Blanche with the South Ridge being the right skyline. 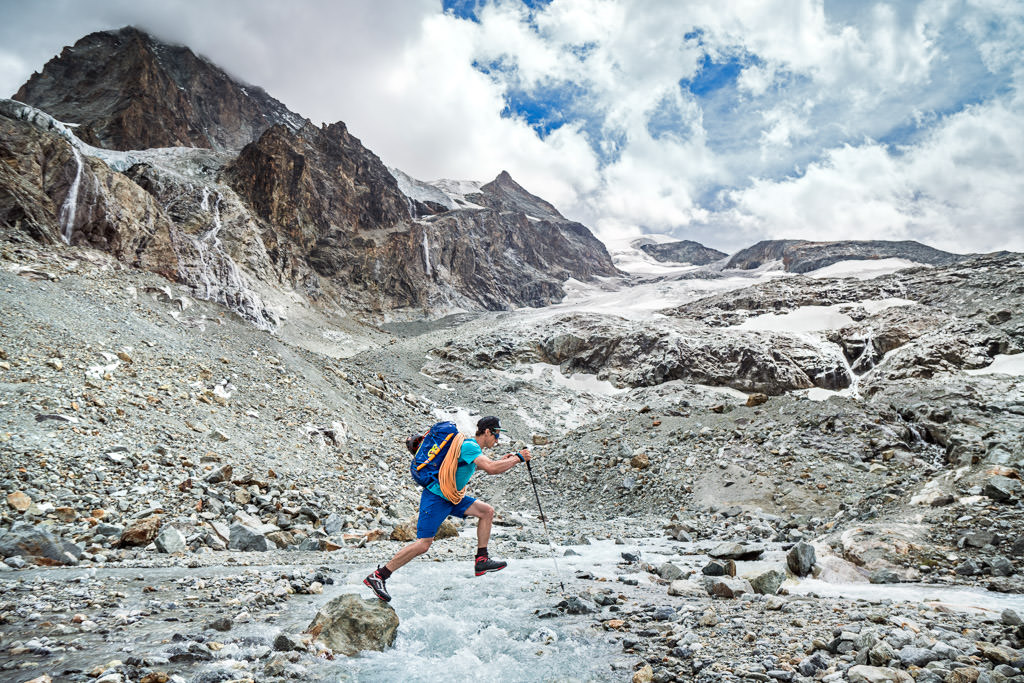 Simon Duverney on the approach to the Cabane de la Dent Blanche. 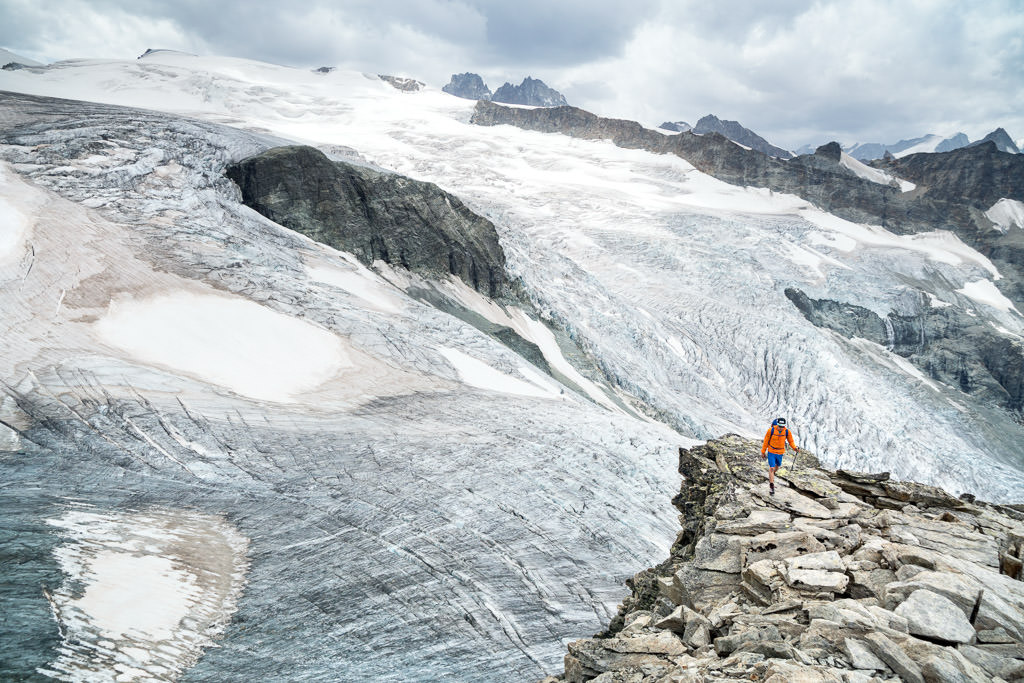 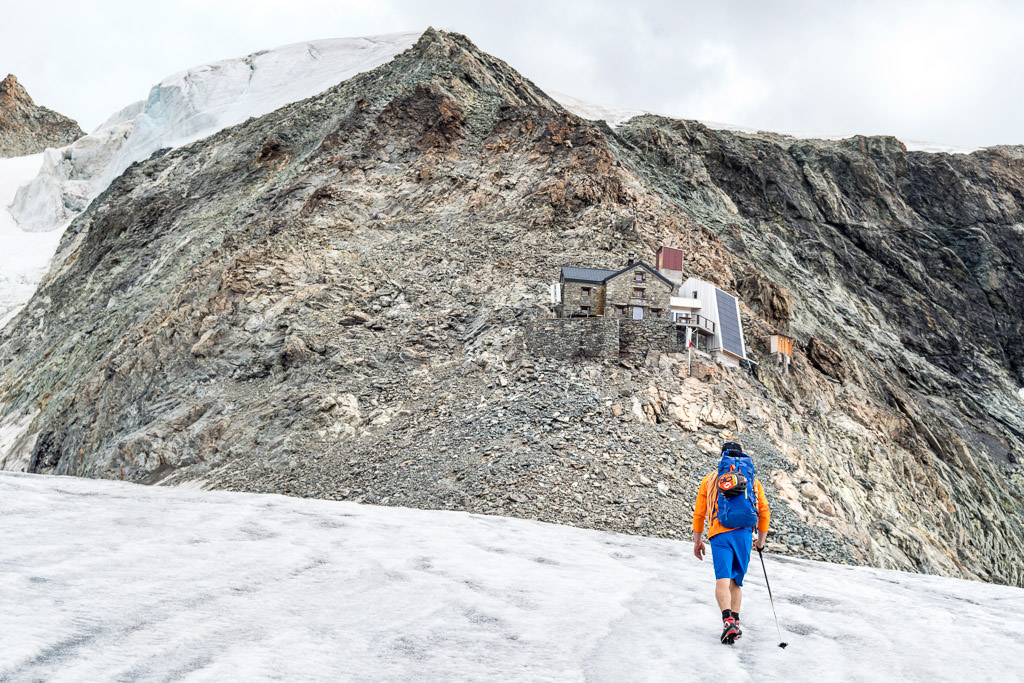 The Cabane de la Dent Blanche where the south ridge literally starts from the back of the hut. 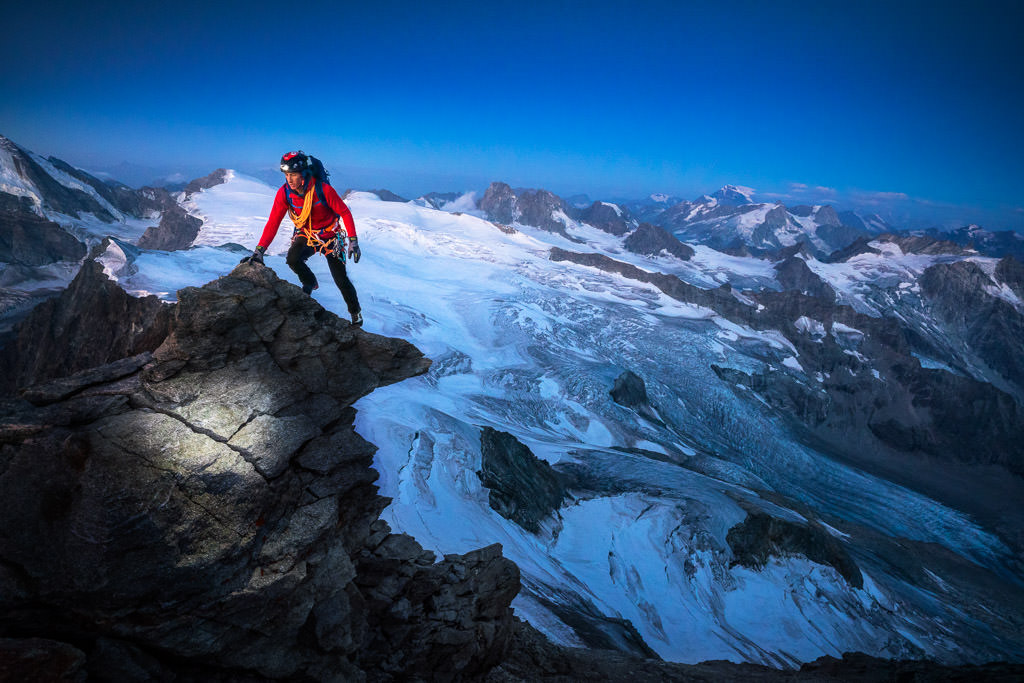 Simon Duverney moving quickly up the south ridge in the pre-dawn. 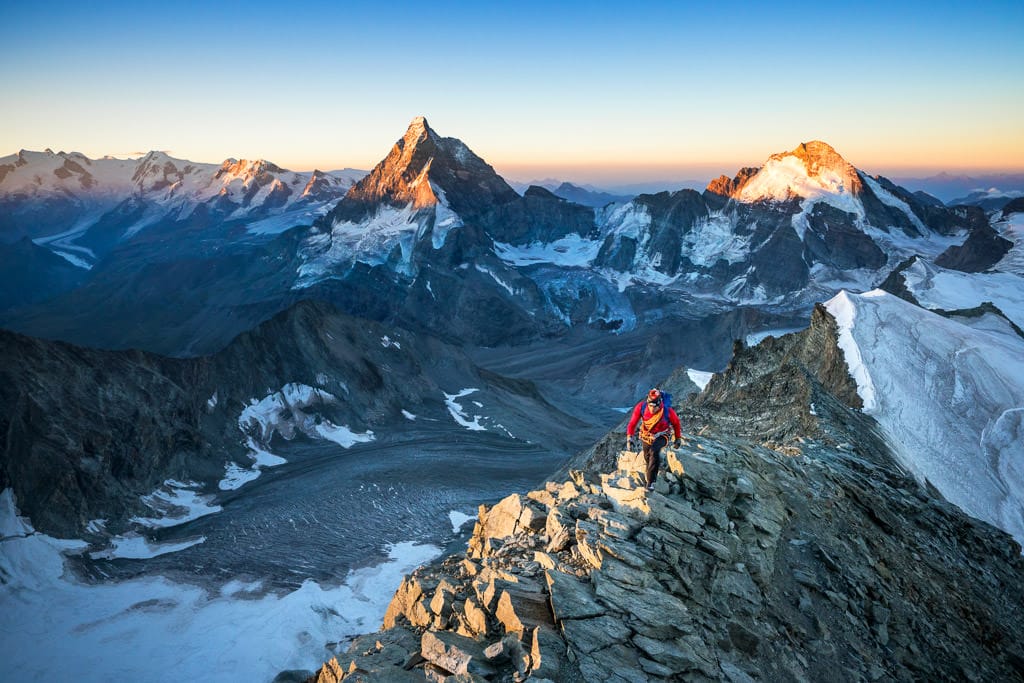 Simon Duverney on the way to steeper climbing on the south ridge. In the background, the first light hits the Matterhorn and Dent d'Herens