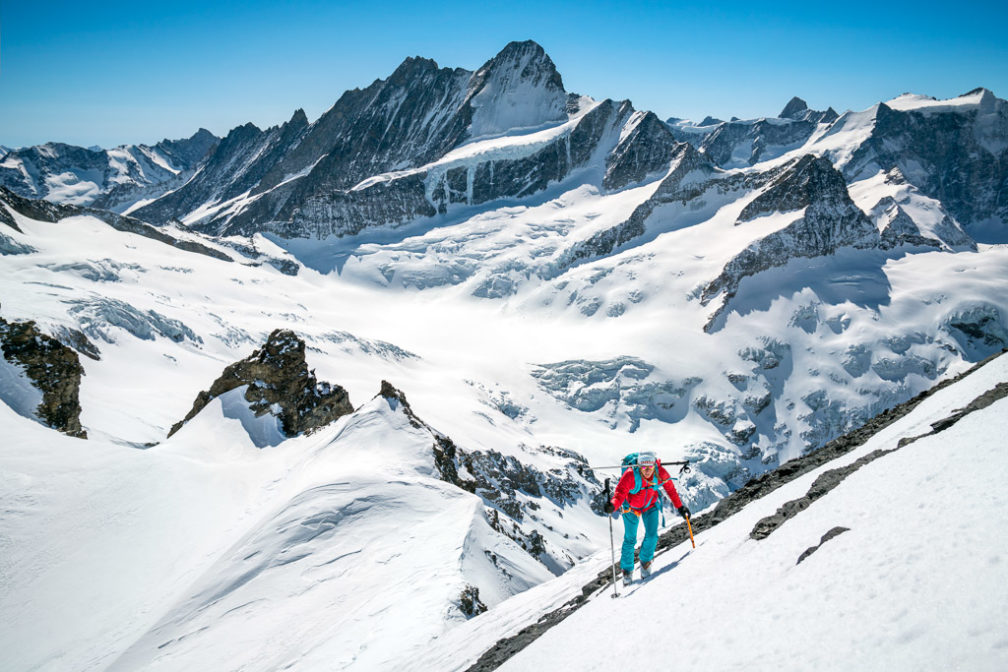 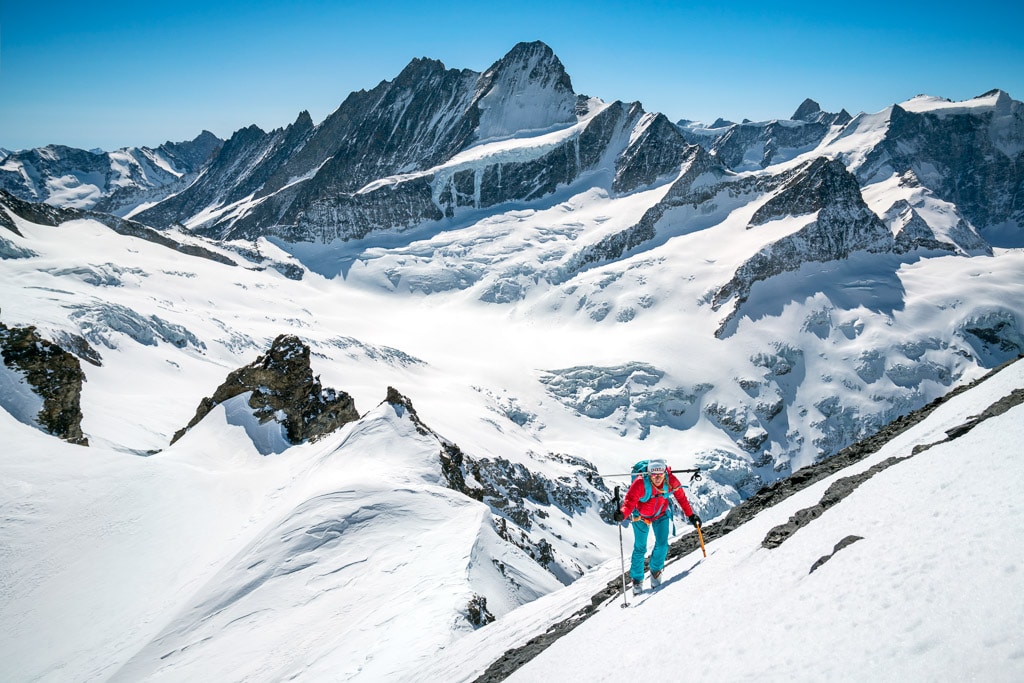 The Wetterhorn looms large over the village of Grindelwald. But due to the fame of its neighbors, the Eiger, Mönch and Jungfrau, the Wetterhorn only plays a supporting role in the Jungfrau Region's line up of mountains.

While the Eiger, Mönch and Jungfrau are popular climbing peaks, they are not ski peaks. This is where the Wetterhorn shines. It is a great ski tour, and as a one day objective, it's a classic tour in big mountain terrain that combines it all; ski touring, glacier travel, climbing and especially, endurance.

The Wetterhorn is typically done in one of three ways:

Overall, the ski touring is relatively easy with only a short, steep section of skinning below the Rosenlaui Bivouac which often requires ski crampons. The Rosenlaui Glacier must be crossed and climbed in a westerly direction. From Rosenlaui, this looks improbable due to a massive serac zone, but, at about 2500 meters, a wide corridor through the crevasses and seracs becomes apparent and it's here that the glacier is traversed for both ascent and descent.

Once across this zone, the route is long and low angle to the saddle south of the Wetterhorn summit. While the march is a bit boring, the landscape is not, especially as you approach the Wetterhorn where views of the Eiger, Schreckhorn and Finsteraarhorn take shape. At the saddle, skis are replaced by boot crampons for the remaining 250 meters to the 3692-meter summit. The route is steep snow with some potential for slabby rock depending on conditions. Posts protect the rock but can be entirely avoided if enough snow is in place, which is about 50° maximum. The summit views will make the morning's effort seem trivial as you'll be looking straight down to Grindelwald to the north, and far out to the Alps to the south and west. Unless the wind is blowing, the only incentive to leave the view is for the 2400 meters of skiing that still remains on your schedule.

The line of descent is much the same as your ascent with a few variations you can take based on which aspect is best in the conditions. In my experience of skiing this numerous times, the Rosenlaui Glacier holds good snow, which only seems fair for the work required for this huge day. Finally, there is one possible variation to exit the tour. Just below the Rosenlaui Bivouac but still above the moraine, a decision must be made about skiing out the same line of ascent, or making a sharp turn west to the cross below the Rosenlaui Glacier and along the base of the Klein Wellhorn. Early in the season, or with enough snow, the same route is taken down as up, but later, or with less snow, the variation west is taken.

TIP: To maximize enjoyment, go when conditions are primarily good from bottom to top. It's a wide range of elevations, so you'll see just about everything. Be fit and ready for a huge day of movement! If you are not familiar with the region, be ready to navigate and make decisions about the route. Do not rely on a track being in. Have all the necessary skills for glacier travel and alpine terrain.

Check in at our Alps Education pages to better understand what is required, especially for Glacier Travel. 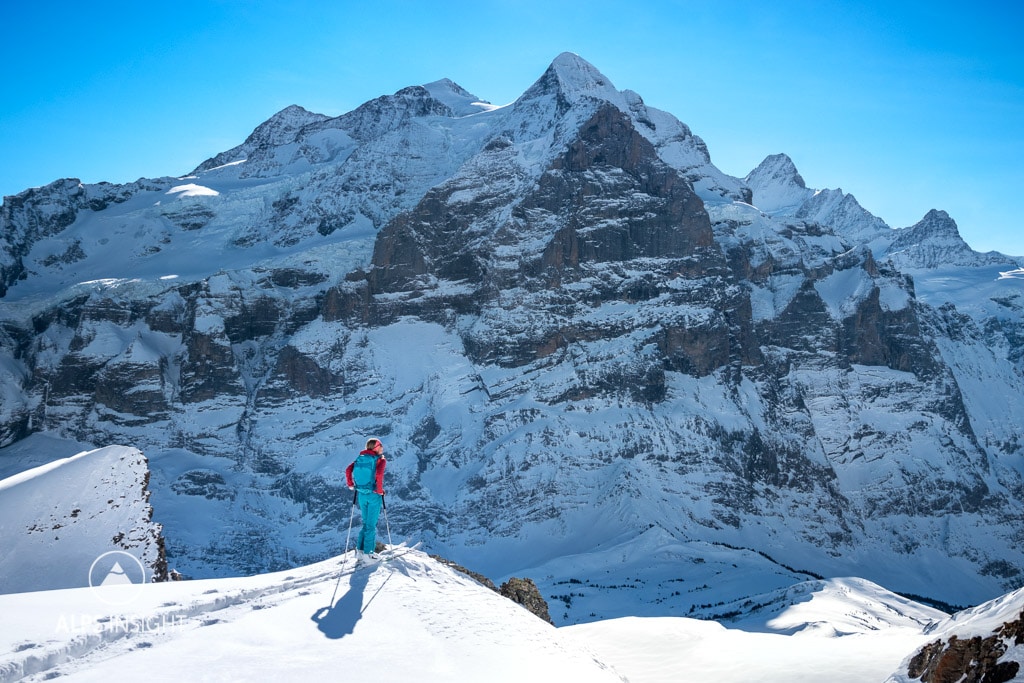 The Wetterhorn, as seen from the north, towers 1700 meters directly above the Grosse Scheidegg and 2700 meters above Grindewald. But while its north face is steep and ominous, its south side is ideal for a ski ascent. 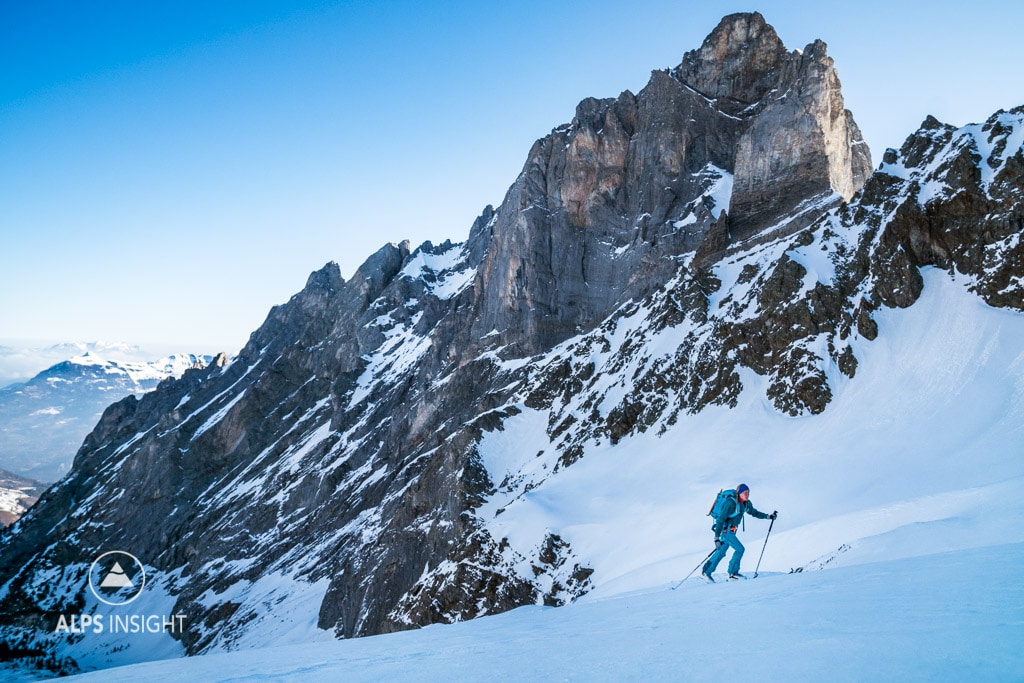 Approaching the level of the Rosenlaui Bivouac at around 2300 meters, just prior to traversing on to the glacier. 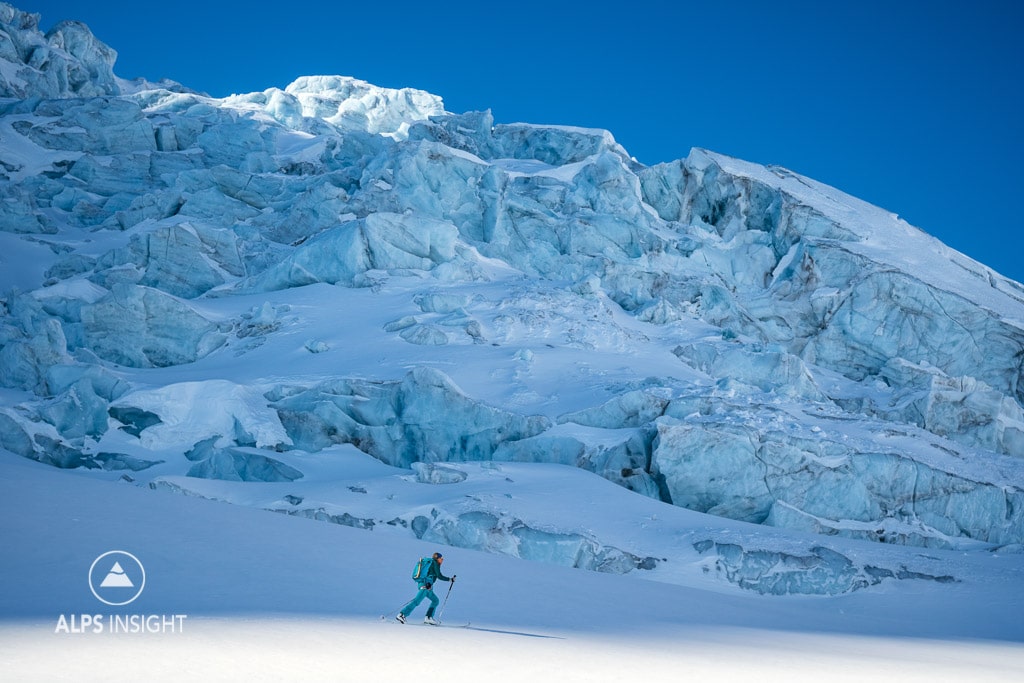 On the traverse of the Rosenlaui Glacier is a corridor through seracs and crevasses. 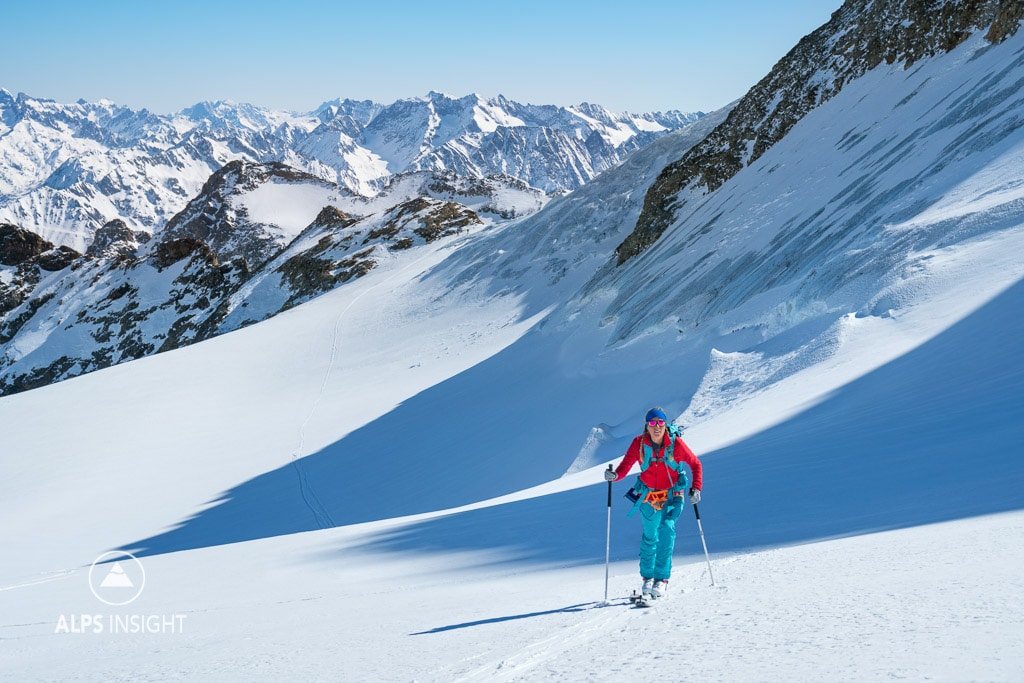 Beneath the north face of the Mittelhorn on the climb to the Wetterhorn saddle. 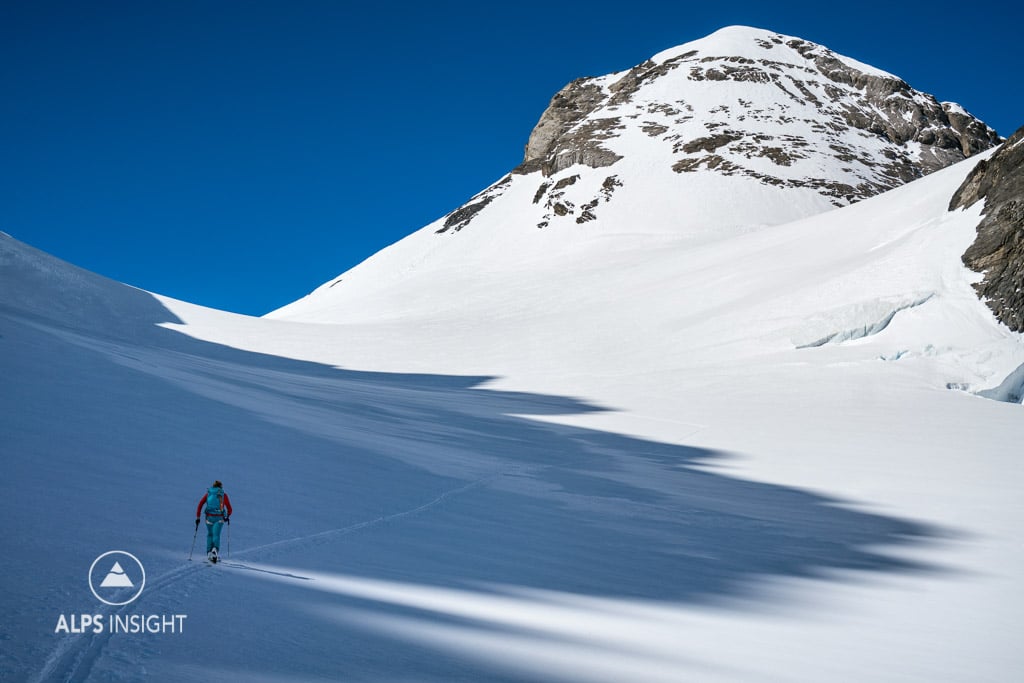 Passing through the shadow of the Mittelhorn with the southeast face of the Wetterhorn directly ahead. The Wetterhorn is climbed on the left side through a hidden snow ramp. 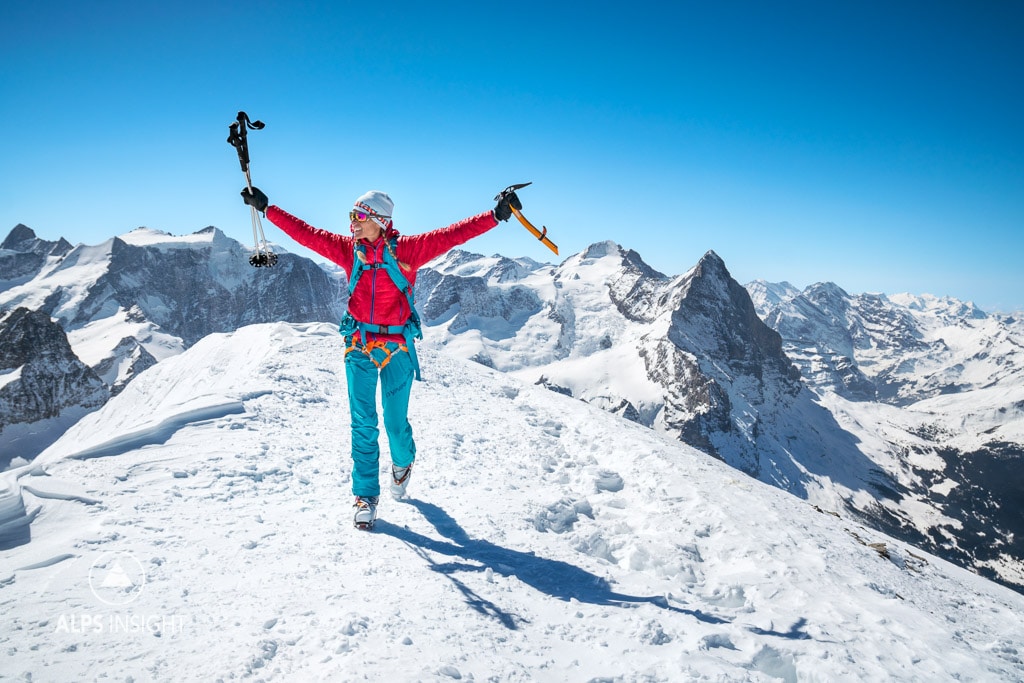 The Wetterhorn summit with the Eiger's shadowed north face to the right in the background.