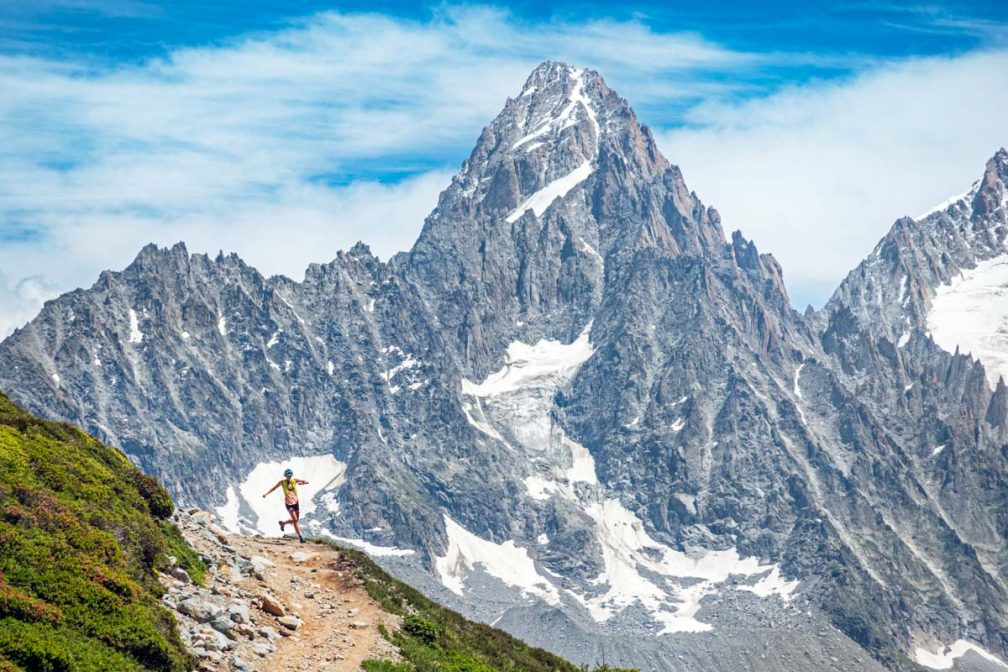 For trail runners, no single place gets more hype than Chamonix. The list of reasons is solid. It has the name, the history, the highest peak in the Alps, the dramatic views, the UTMB, so many mountains, great vibe, and of course the trails. Trails everywhere. But, there’s a nasty little secret… if you blindly head out on just any Chamonix trail, you’ll have what’s on that list of goodies but you may well be on a very bad trail. Just because it’s Chamonix trail running doesn’t make it good trail running. We decided it was time to provide a guide of the very best Chamonix trail running, to have you enjoying everything Chamonix is famous for, especially the running part.

I have a long history with Chamonix trail running going as far back as 2002. It’s where I started really shooting trail running, back when it was a bit weird to run on the trails. Weirder still, we wore some pretty outlandish gear that at the time made no sense. Hand bottles? Water hoses? Packs with pockets in front? Running shoes in the mountains? We got some curious looks.

But, our images got some serious looks. What would become iconic Chamonix trail running photos like running on the steps above Montenvers, dancing across the Lacs des Chéserys shoreline or running alongside massive glaciers hadn’t been done yet. We shot them, developed our slides (yes, film!) and shipped them off. The brands and magazines published the images as soon as they received them. It was all new and exciting, the sport of trail running was beginning to take root.

In 2003, we were living in the Hotel Touring on Rue Joseph Vallot. The place was an utterly hopeless, dilapidated old hotel that always smelled like salami thanks to the Charcuterie on the first floor. The ceilings dripped water when the upstairs neighbor showered. We tried to spend as little time as possible in our room.

It was the year of the first UTMB. Kicking off what would later become tradition, rain was bucketing down when the arriving winner was announced over the town loudspeaker. But unlike today, when the leader pulls into town during daylight, it was 2 a.m. We figured we may as well go have a look so we got up, splashed across the carpeting, and headed to the town center just 200 meters away.

Among just a handful of dedicated and sleepy fans, we cheered and yawned at the arrival of the magnificent Dawa Sherpa, winner of the inaugural Ultra Trail du Mont Blanc. Soaking wet, he strode in, crossed the line and stood awkwardly receiving Chapeaus. At some point I raised a camera and pointed it in his general direction. The crowds parted allowing me a clear shot off of his beautiful smile, a happy man. Better still, his proud wife standing at his side. I love this photo for the moment.

A year later, in 2004, I ran my own Tour du Mont Blanc with Janine and friends Topher and Kim Gaylord. We did it in three days and it taught me that I needed to start running more if I wanted to get better. It also taught me that the place is absolutely amazing. The stretch of trail from Courmayeur to the Swiss Val Ferret has to be one of the most beautiful, and runnable, pieces of trail in the world. Descending into Chamonix on the Floria Trail after running around the massif is a feeling you’ll never forget.

Today, as I look back on my Chamonix trail running archive, there’s visible growth to where we are today. I can see clothing, pack and shoe styles change, an evolution from a fringe activity to a sport, and a clear development of Chamonix as the global epicenter for trail running.

I’ve also witnessed the mountain environment change dramatically. In 2017, we ran the Chamonix to Zermatt Glacier Haute Route, a route that makes it clear just how bad things are getting. And, a route that will become increasingly difficult to do as each summer takes its toll. My own photos, in just 20 years, reveal a huge decrease in the size of glaciers, massive scars in the landscape from these shrinking glaciers, permafrost melt and rockfall, and an always increasing mountain infrastructure to support tourism. More people than ever are going to Chamonix to see for themselves what we all go there for, mountain beauty. For both first time visitors and longtime locals, Chamonix is still stunning. It’s only with perspective that these changes are apparent.

So, why do a Chamonix Trail Running Guide when there are already so many people? Because they’ll come no matter what. And they’ll come with the same dreams of trail running bliss that we all go there for. They may as well do it right and have a great time. We feel like we can put them on the right trails.

When we were finishing up working on this guide last week, we realized that we had been stopped numerous times, both in town and on trails by people recognizing us from our social media and the new Black Diamond film, “Into the Route”. They stopped us to say thanks for creating a curated collection of quality runs. These people were doing what we put on our site and they were loving them. As one runner commented on the Mont Buet Run, “Thanks to Dan and Kim for all their hard work on the site. It made my trip. In the age of so much shit content, please keep fighting the good fight!”

And that made our day.